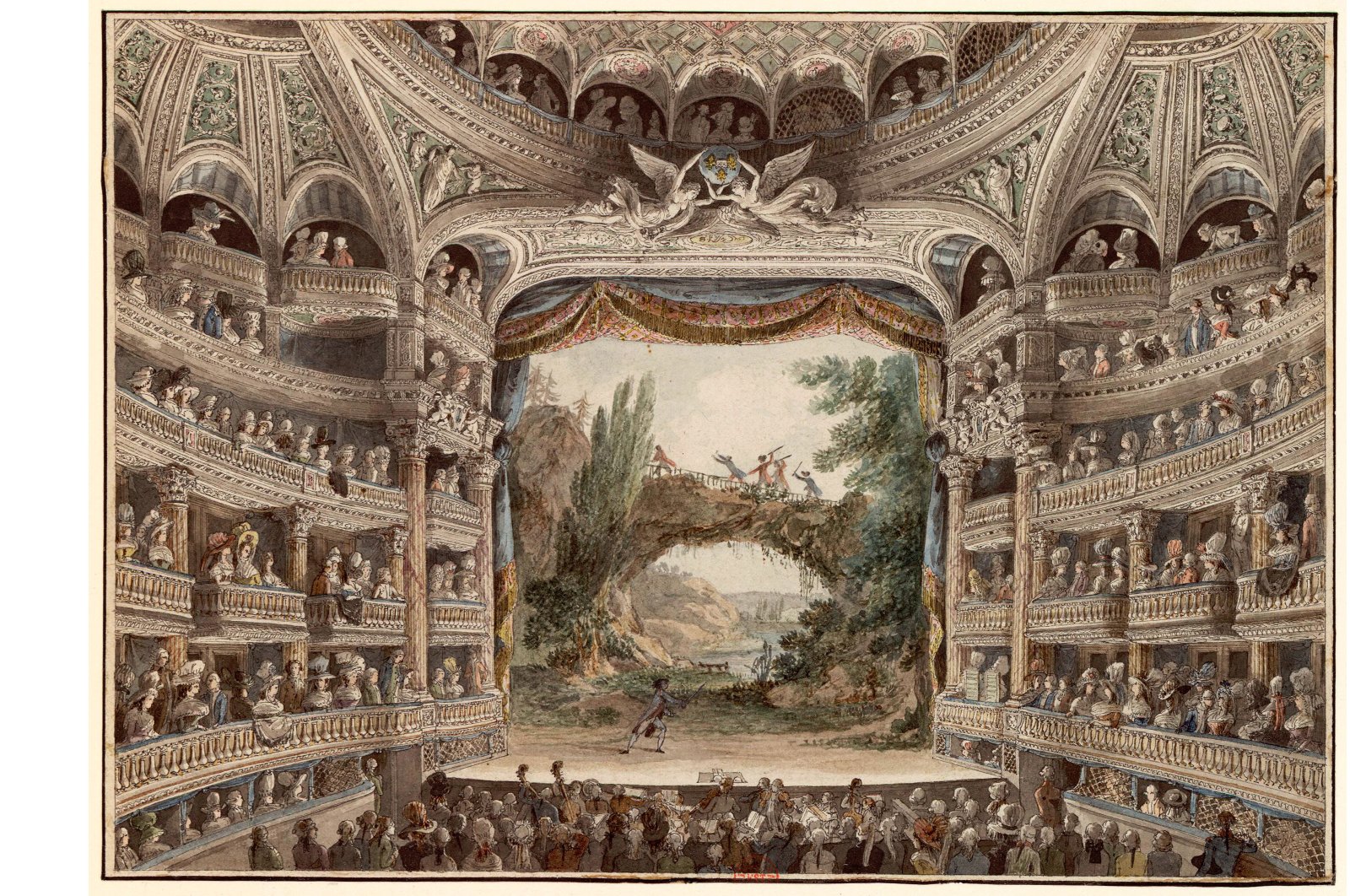 In European literature, Islam turned into an element of fear by the 16th century, with the influence of the church. Islam, Ottomans and Turkishness were used interchangeably and presented as an image of fear. Although the Ottomans, a French ally, granted many commercial concessions to this country, the churchly provisions on Islam were still valid until the Ottoman conquests ceased.

When commercial and diplomatic relations gained momentum around the world in the 17th century, both France and Europe gradually overcame their prejudice. So much so that, with the influence of Ottoman ambassadors, Turkish fashion called Turquerie began first in France and then in other European countries, and the fear was replaced by admiration.

The age of Reform and Enlightenment, when the influence of the church was undermined, gave rise to the idea of "understanding the East correctly" among Western intellectuals. As a result, they developed sympathy for both Islam and Ottoman aesthetics and culture. Thus, many works that both dealt with the East and nurtured from it were produced in different fields of arts and culture.

Nevertheless, with the influence of social and political habits, fanatical hostility both among people and intellectuals has always been there. In Europe, representations and theater play against Islam or the Ottomans are cases in point, reflecting this hostility. There are many documents in the Ottoman archive indicating that these plays were removed from stages or were not staged at all, at the request of Ottoman ambassadors and by diplomatic means.

The Ottomans strove to put an end to this cyclical fanaticism, worrying that it would harm both these fanatic states and the Muslim people. Sultan Abdülhamid II, who attached great importance to maintaining the prestige of the Islamic caliphate, was quite sensitive in this regard.

Abdülhamid II was a sultan who subscribed to almost every European newspaper and read them in an attempt to know what was going on in the world. The famous French poet, dramatist Marquis Henri de Bornier wrote a play called "Mahomet" ("Muhammad"), which carried derogatory statements about the Prophet Muhammad and Islam. After reading in a French newspaper that this play would be staged in Paris, Sultan Abdülhamid II immediately sent an instruction letter to the Ottoman embassy in Paris in 1888.

"Seeing that a theatrical work written against Islam will be performed at the Comedie-Française Theatre in Paris, it is clear that the performance of such a play, which will have a bad effect on Muslims, will not be consented to by the French state," the letter read, asking for the prevention of the performance in a gentle, diplomatic discourse.

Then-Ottoman Ambassador to Paris Mahmud Esad Pasha met French bureaucrats and his efforts proved conclusive in postponing the staging of the play for a year. However, in March 1890, a diplomatic crisis broke out when the Comedie-Française again included the play in its repertoire. The French Foreign Ministry declared that there was no element in the play against Islam and the Prophet Muhammad, assuring that the play would not be staged in Algeria and Tunisia, which were French colonies back then.

In the meantime, Sultan Abdülhamid II personally met Gustave Olivier Lannes de Montebello, French ambassador to Istanbul, insisting on the removal of the play. After the sharp-witted ambassador warned Prime Minister Charles de Freycinet, the staging of the play was forbidden by the government, not only at the Comedie-Française but in all of France.

Because of the ban in France, Bornier agreed with the Lyceum Theatre in London to stage his play in Britain, which was considered more advanced in freedoms. At the time, the Foreign Secretary of Queen Victoria was Robert Gascoyne-Cecil, aka Lord Salisbury, known for his friendly relationship with the Ottoman Empire. Again, at the request of the sultan, the Turkish ambassadors applied to Salisbury and managed to ban the play in Britain.

Bornier’s play was not the only one

These were not the only plays that Sultan Abdülhamid II fought to prevent from taking the stage, through diplomatic means. In 1893, the sultan was informed that a play called "Mehmed II" would be staged in Rome, and he ordered the government to apply to the Italian Foreign Ministry and to ask for the assurance that the play would be removed if it contained an insulting element about either Sultan Mehmed II, also known as Mehmed the Conqueror, or Islam.

After theaters wanted to stage English poet and playwright William Percy’s play "Mahomet and His Heaven" (1601) in Paris in 1900, the name of the play was changed and considerations against Islam, which could lead to misunderstanding, in it were removed with the intervention of the Ottoman embassy in Paris. However, it should be noted that none of these interventions by the Ottoman Empire caused a stir in the world or led to the declaration of war. Also, no one attacked the people who wrote the plays.

At the heart of all this propaganda made through plays in France, there was the French philosopher and literati Voltaire (died in 1778). The author, considered one of the masterminds of the Age of Enlightenment, wrote a play called "Le fanatisme, ou Mahomet le Prophete" ("Fanaticism, or Mahomet the Prophet").

Pushing the Enlightenment humanism and tolerance to the background in this play, Voltaire attracted attention with fanatical hostility. Although he later changed most of his ideas about Islam, even appreciated and praised the Prophet Muhammad, this play, fraught with disinformation, was one of the most important factors in the preconceived view of Islam and the Prophet Muhammad in Europe.

The play depicts the prophet's marriage to Zaynab bint Jahsh in a vulgar style that goes as far as to slander. In a letter to King Frederick of Prussia when his play was printed, Voltaire admitted that the play had nothing to do with historical facts. He said that his goal was to tell the evil of bigotry and that he believed that religious tolerance would establish a brotherhood.

When Voltaire's play was staged in 1742, the same year of its publication, it was first castigated by Catholic Jansenists, who emphasized original sin, human depravity, the necessity of divine grace and predestination in their theological movement, on the grounds that it upsets religion. When it became clear that the bigotry meant here belonged to Christianity, the reaction escalated and the play was removed from the stage. Although he was a dissident, Voltaire made his play sanctified by anti-Jansenist Pope Benedict XIV and got away with this problem. Sultan Abdülhamid II also banned the publication of Voltaire's work on Ottoman soil.

Voltaire's fanatical act was criticized by many European intellectuals. In his autobiography, "Aus meinem Leben: Dichtung und Wahrheit" ("From my Life: Poetry and Truth"), Johann Wolfgang von Goethe considers this behavior of Voltaire to be "cheekiness." Based on the information he acquired about the Prophet Muhammad, he emphasized that he could never define the prophet as a trickster. He even prepared a big theatrical work called "Mahomet" at the age of 23 in response to Voltaire, but it was not printed.

The harshest criticism of Voltaire's religion-related work was voiced by Wolfgang Amadeus Mozart. Mozart, who did not find what Voltaire said about religious tolerance and freedom of faith sincere, said on his death: "The ungodly arch-villain, Voltaire, has died like a dog."

Likewise, the leading Ottoman intellectuals considered Voltaire’s attitude offensive. For instance, Ottoman writer Namık Kemal said he made a fool of himself because of his obvious mistakes in this business. Also, Turkish positivists were appalled that a visionary like him had written such a poor play. They pointed out that the work has nothing to do with truth and was a black mark on Voltaire’s name.