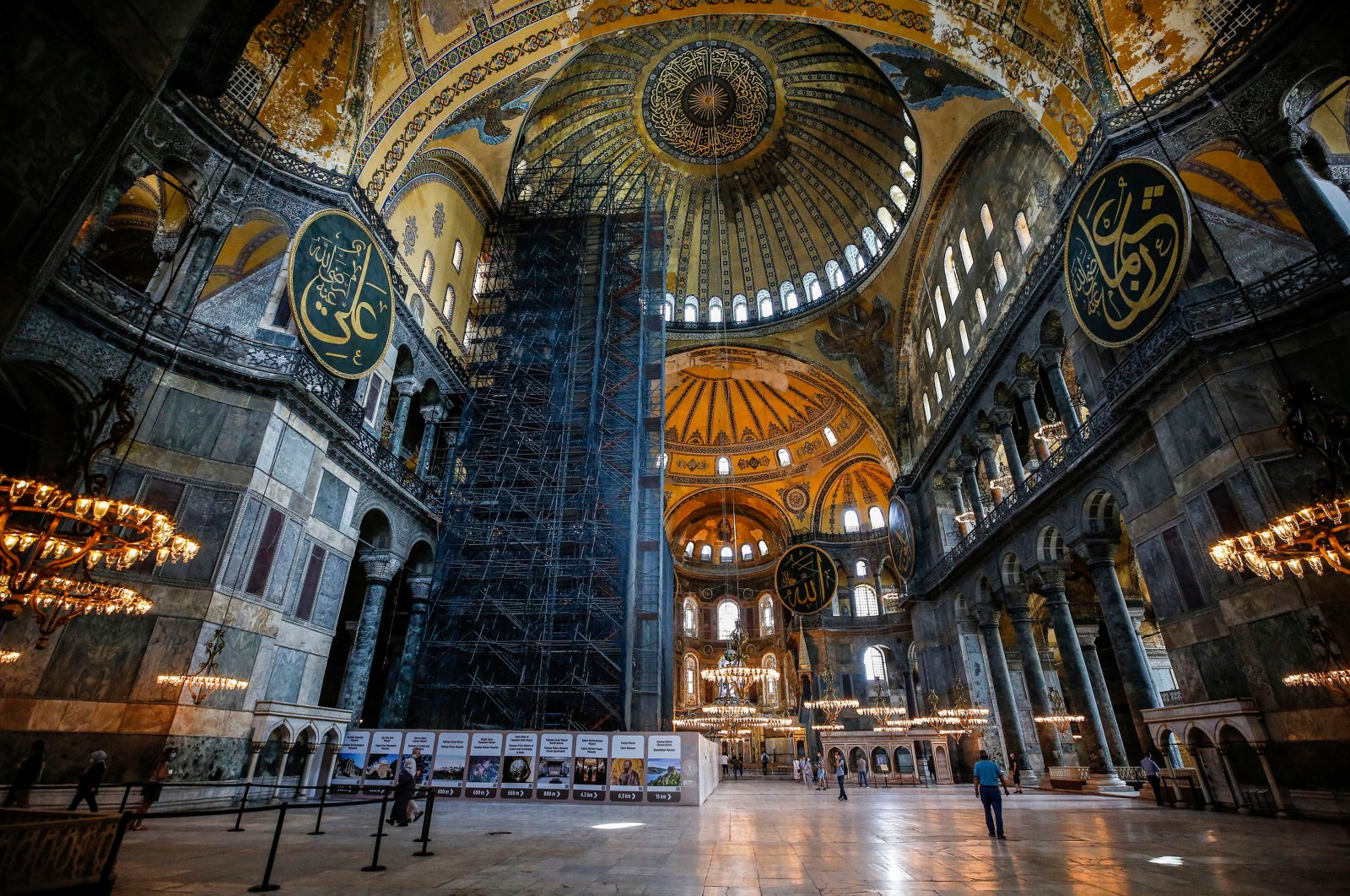 With the UNESCO World Heritage Site reopening for prayer, let’s take a look at the glorious building’s legacy and history during the Ottoman Empire

Last week's announcement that the iconic Hagia Sophia, which had served as a museum for 86 years, would be used again as a mosque has created quite a stir around the world. Since Turkey's transition from single-party administration to multiparty democracy, governments had promised Hagia Sophia would reopen for worship, undertaking various attempts that remained inconclusive.

The following controversy and the promises of governments were manifestations of the deep wound in the public conscience. While some governments and private enterprises attempted some initiatives, ideological obstacles blocked progress in this scope.

An unlawful regulation should be corrected through law. Indeed, a similar request to the Council of State in 2016 was rejected. This request was based on the invalidity of the signature of the president that led to the decision of 1935. Examinations of the document showed that the signature did not match the original, the document was not published in the Official Gazette and did not follow the proper procedures. But during the one-party government period, the fact that nothing could happen without the president's knowledge and the continued use of the structure as a museum shows the practice was allowed.

The most recent appeal was filed against the unlawfulness of the decision. Since the decree could hypothetically be revoked by a different government in the future, it was made permanent through the backing of the Council of State. As a matter of fact, after canceling the decree of 1934, the Council of State paved the way for opening Hagia Sophia for worship as a mosque.

In the evening following the decision, President Recep Tayyip Erdoğan announced Hagia Sophia would reopen for worship, with the first Friday prayer to be performed on July 24.

Hagia Sophia was the largest church built by the Eastern Roman Empire in Istanbul. When it was first built, it was called Megale Ekklesia (The Great Church). From the fifth century onward, it was known as Hagia Sophia (Divine Wisdom).

Throughout the Byzantine Empire, it served as the cathedral and the biggest church of the city, where the monarchs were crowned. It was rebuilt three times where it is located. The first church was built in 360 by Emperor Constantine I (337-361). Today, there are no remaining structures from the first church. However, bricks stamped with "Megale Ekklesia" in the current structure's storeroom are thought to have belonged to the original building.

The second church, a basilica covered with a wooden roof, was rebuilt by Emperor Theodosius I in 415. This church was destroyed during the reign of Emperor Justinian I (527-565), on Jan. 13, 532, in the great public uprising, referred to as the Nika riots.

The current structure was built by the two formidable architects of the time, Isidore of Miletus and Anthemius of Tralles, upon the order of Emperor Justinian I (527-565). Rumor has it 10,000 workers worked on its construction. It was completed in a short period of six years and opened for worship on Dec. 27, 537.

The decorations of the building that have survived to the present day have been removed and reworked from time to time over the years. With the influence of the iconoclasm movement – a social belief in the importance of the destruction of icons and other images or monuments, most frequently for religious or political reasons – the walls were scraped and the decorations were destroyed and then rebuilt. Likewise, various natural disasters over the years have led to repairs on the structure.

Spanish envoy Ruy Gonzalez de Clavijo, who came to Istanbul in 1402, noted that he saw Hagia Sophia in a devastated and neglected state. As such, during the fourth Crusade, Istanbul was occupied by Latin Christians between 1204 and 1261. During this period, Hagia Sophia was looted along with the rest of the city.

A few years before the conquest of Istanbul, it again faced the danger of destruction in an earthquake. Upon the request of Sultan Murad II, a Turkish architect named Ali Neccar was sent from Edirne to repair the north side. When the architect, who completed the necessary reinforcement, returned to Edirne, he told the sultan that he had prepared the base of the minaret in the hope that it would be a mosque in the future.

The Ottoman Empire took on the words of the prophet to heart, which was symbolized as the “Red Apple," a metaphor for domination. Sultans who took the throne ruled with the focus of conquering the Red Apple – including Sultan Mehmed II, aka Mehmed the Conqueror.

When Sultan Mehmed II took the city, he was given the title Abu'l-Feth (Father of Conquest) and “Fatih” (The Conqueror). As soon as he entered the city, he visited Hagia Sophia. He spent quite a long time there. He went to the top of the building and looked at both the city and the status of Hagia Sophia. He could not hide his admiration for the size of the building, but he was upset about the destruction he saw. At the top of the building, he read a Persian poem that translates as:

“In the towers of Afrasiab, the owl beats the band. At the emperor's palace, the spider acts as a janitor.”

Sultan Mehmed II prevented the destruction of Hagia Sophia and after performing his first prayer, he converted it into a mosque. He also had an adjoining madrasah built. He had the first minaret built on the south of the two towers next to the half dome in the west. The minaret was later removed during renovations in 1574.

For Hagia Sophia to operate as a mosque, Sultan Mehmed II donated a significant portion of his treasury to his foundation. All subsequent Ottoman sultans also contributed with additional buildings, renovations and new decorations.

The structure was also heavily damaged in major earthquakes in Istanbul. Forty years after a major renovation by Sultan Mahmud II in 1809, it had to undergo major renovations again. A wide range of repairs was undertaken by the Swiss architect Gaspare Fossati upon the order of Sultan Abdülmecid between 1847 and 1849.

Sultan Abdülmecid was very involved in the repairs and renovation. When he came to the mosque, a new pavilion was made for him to rest and receive guests. Again, a "Hünkâr Mahfili," a structure within the prayer hall of a mosque used for worship by the sultan, the royal family and high-ranking government officials, as well as “muvakkithâne,” a place for observing the prayer times, were built next to the courtyard door. The wall surrounding the courtyard was also renewed.

In the 1894 earthquake, Hagia Sophia was damaged once again. Cracks appeared on its walls and large mosaic surfaces were damaged when plaster was shaken loose. Sultan Abdülhamid II strengthened the building by repairing the damage. The condition of the building was inspected by the architects Raimondo Tommaso D'Aronco and Kemalettin Bey. During the constitutional period, Henri Prost was among the Western architects who examined the condition of the building.

If a place is conquered peacefully, the status of the holy structure is determined according to the peace agreement. For this reason, Caliph Omar ibn-al Khattab, who came to take Jerusalem, which was conquered by peace, refused to pray in the Church of the Holy Sepulchre, which was important for Christians – as it could be converted into a mosque by Muslims. However, the situation of Hagia Sophia was quite different.

Just a week before the conquest, Sultan Mehmed II had sent his envoys to Emperor Constantine for the third and last time. Together with the statesmen, the emperor rejected the sultan's offer of peace. By doing this, he accepted all the requirements of the Islamic law of war at the time.

If a place has been conquered by war, everything that is owned by the enemy, the real estate and captives, will be looted. One-fifth of it belongs to the state, while one-fifth of it belongs to the ruler. The ruler also has the right to choose what will be included in his share. This is a fixed rule of law defined in a verse of the Quran and the sunnah of the Prophet Muhammad.

If a city is once again conquered by war, the churches here will not be destroyed. But it is up to the ruler to decide whether to let them remain as holy structures. The monarch can leave them as churches or turn them into mosques or residential buildings. This is a consequence of the law of war.

Worldwide, there are holy structures that were converted into a Roman or Mitra temple, from there to a church and then a mosque or a Greek or Persian temple. Umayyad Mosque in Damascus, the Cathedral of Syracuse in Sicily, the Pantheon in Rome, the Parthenon in Athens and many more.

Sultan Mehmed II converted Hagia Sophia, the symbol of conquest, into a mosque in accordance with the law and declared it as his property. While its endowment is at the Land Registry and Cadastre Directorate, it is registered as the “Sultan Mehmed the Conqueror Foundation" in the republic land registry records.

As modern law acknowledges, the foundation is listed in the right to property and is untouchable. Today's practice is also a result of respect for the property of Sultan Mehmed II.

Mehmed II says the following in his foundation voucher: “All of these things that I have explained and commissioned have been issued as determined and written in the foundation; conditions cannot be changed; its laws cannot be altered; the originals cannot be transformed into anything other than their purpose; the rules and grounds determined cannot be reduced.”

And then he reads a long curse for those who will transform the works he left, especially Hagia Sophia, out of these rules. He said that it is not halal (permissible in Islam) for anyone who has been created by Allah, who believes in Allah and his vision, and who believes in the hereafter and his glory, to diminish, disrupt, change, alter, convert, neglect the foundation and eliminate its function. If anyone commits any of these acts, in short, if he commits one of the superstitious acts, he is clearly committing a great haram (forbidden by Islam). The sultan continued: “Let the curse of Allah and the angels and all mankind be upon them. Let them dwell in hell forever and their punishment shall not be eased. No mercy for them forever. Whoever changes it after hearing it and seeing it, his sin shall be upon those who change it. Indeed, he is the hearing, the knowing.”

Therefore, the reopening of Hagia Sophia as a mosque today is a step for liberation from the curse of Sultan Mehmed. Turkey, on the other hand, deserves appreciation for respecting his heritage and doing what it takes to preserve it.