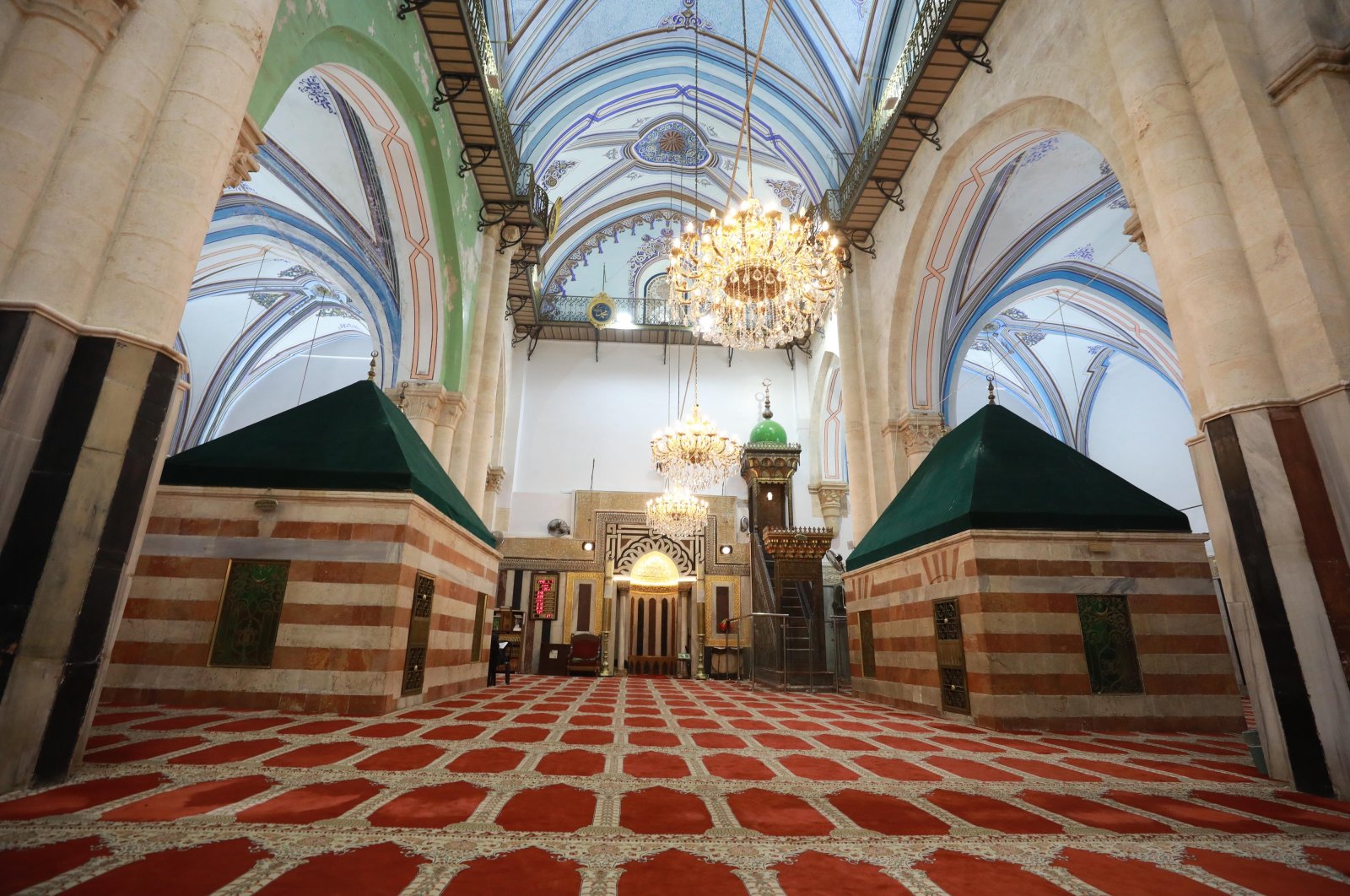 For hundreds of years, historical artifacts consisting of calligraphy, motifs and embroideries belonging to the Ottoman period have continued to decorate the Al-Haram Al-Ibrahimi Mosque, which is generally called the Ibrahimi Mosque by Muslims after the patriarch Abraham, revered as the Cave of Machpelah by Jews and known as the Tomb of the Patriarchs by others, in the city of Hebron (al-Khalil) in the occupied West Bank.

Sheikh Hafthi Abu Sneineh, director of the Ibrahimi Mosque, told Anadolu Agency (AA) that the scripts and embroideries on the walls of the mosque with their thuluth calligraphy are among prominent works from the Ottoman Empire. He noted that some of the period's artifacts are verses of the Quran that are embroidered on the maqam, a shrine built on the site associated with a Muslim saint or religious figure, of Prophet Abraham, Jacob and their wives – as well as the decorations on the ceiling and the plates with the name of Prophet Muhammad and four caliphs.

Abu Sneineh stated that the decorations in the interior of the mihrab, a semicircular niche that indicates the direction of the Kaaba in Mecca where Muslims should face during prayer, and the candelabrum used to enlighten the mosque, as well as a surah written on the wall of the mosque, are other Ottoman works. The gold-leaf inscriptions in thuluth calligraphy on the right side of the interior also belong to the period, he said.

The director noted that Turkey's aid to Palestine continues despite the fact that it has been a century since the Ottomans withdrew from the territory, adding that the carpets in the mosque were renovated by the Turkish Cooperation and Coordination Agency (TIKA) in 2015. Abu Sneineh mentioned that the mosque administration has a Turkish fabric in its possession and that the maqams will be covered with it after some restoration work is completed.

Muhammad Abu Saleh, a researcher in Hebron who has classified Ottoman artifacts inside the Ibrahimi Mosque, said most of these relics consist of Turkish tiles, decorations, banners, curtains, windows, marbles, wood and leathers. As for the Ottoman works outside the mosque, Abu Saleh noted that the bazaars around the building, as well as shrines and Turkish baths, are among the most prominent Ottoman works in Palestine.

According to the Hebron Municipality's website, the Ottomans took care of protecting the Ibrahimi Mosque from 1517 to 1917, when they ruled Palestine, and that they didn’t make new major additions that would disrupt the authenticity of the site.

The mosque was built with huge stones, some exceeding 7 meters (23 feet) in length and a meter in height, that are stacked as high as 15 meters. According to data from the state-run Palestinian National Information Center, the walls of the mosque consist of the remains of a building built by the Jewish King Herod I, also known as Herod the Great, whom the Roman Empire assigned to Judea. The walls, built under the orders of Herod the Great on the mosque, date back to the time of Prophet Abraham, who is believed to have lived about 4,000 years ago.

The Ibrahimi Mosque, which is similar to the Al-Aqsa Mosque in structure, was used as a church in the Roman and Byzantine periods and was converted into a mosque by the Islamic armies in 634. The site was once again used as a church for 90 years, however, following the Crusades but was last switched again into a mosque during the reign of Saladin, the Muslim conqueror who seized the holy city of Jerusalem in 1187.

According to the Jewish faith, the Ibrahimi Mosque is considered the holiest temple on earth after Solomon’s Temple, which is believed to be in Al-Aqsa Mosque.

In 2017, UNESCO decided to add Ibrahimi Mosque and the Old City area – which is considered an endangered area belonging to Palestine on the World Heritage List.

The Ibrahimi mosque is in Hebron, West Bank, which has been under Israeli occupation since 1967. It was closed after a Jewish fanatic named Baruch Goldstein opened fire on Muslims performing morning prayers on Feb. 25, 1994. When it was reopened, it was divided into two parts by Israel, with 63% given to the Jews and 37% to Muslims. A total of 29 Palestinians were killed and more than 150 injured in the Ibrahimi Mosque massacre.