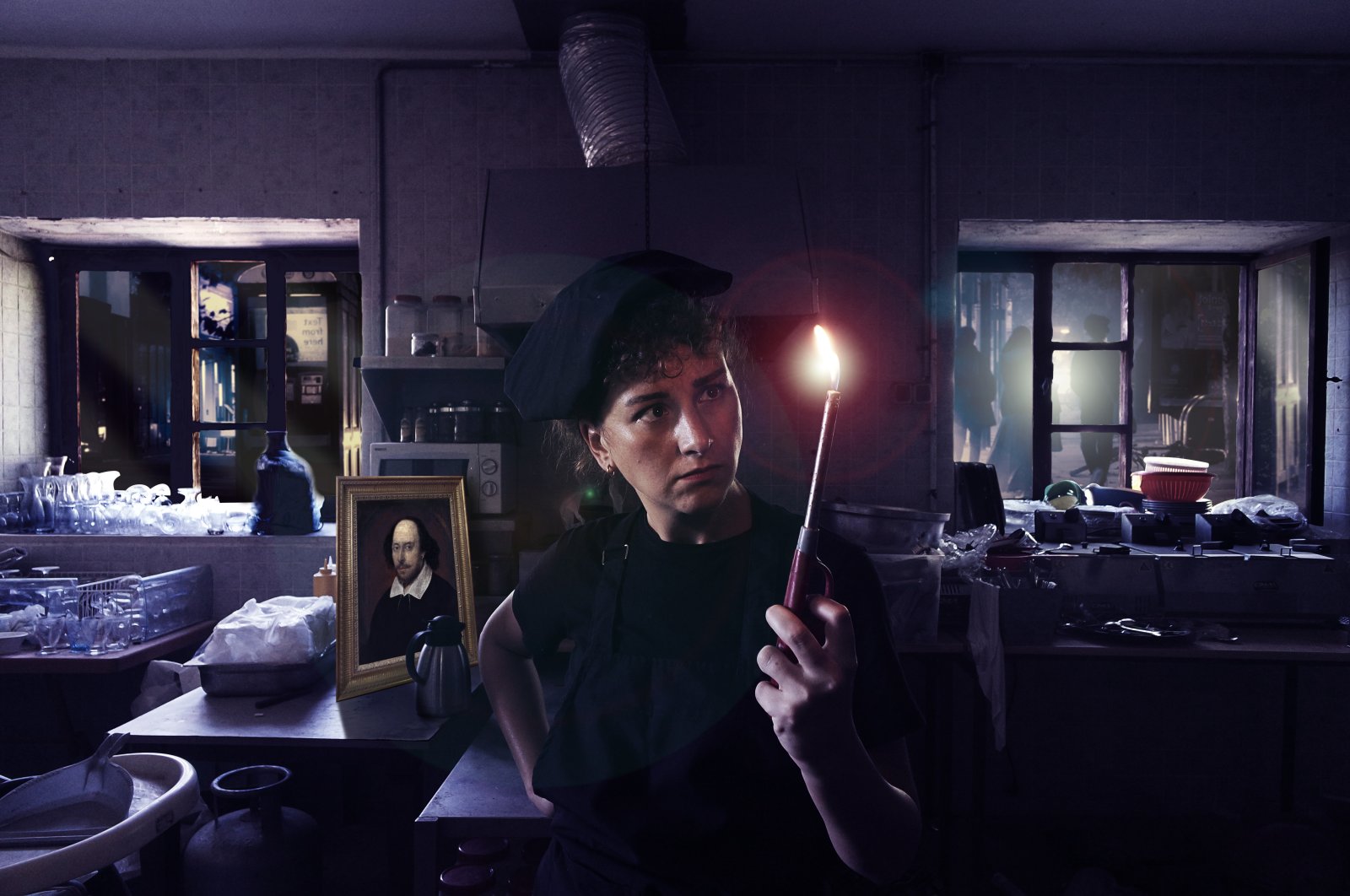 As part of the 24th Istanbul Theatre Festival, organized by the Istanbul Foundation for Culture and Arts (IKSV), a total of 29 theater ensembles and dance troupes from Turkey and abroad will enthrall spectators during performances Nov. 14 to Dec. 1. Due to the COVID-19 pandemic, this year’s festival program features both in-person and online performances.

The festival program is giving wide coverage to domestic productions this year in order to alleviate the severe impact of the pandemic on the Turkish theater scene. Many of the online performances were produced especially for the digital platform.

The festival will also host free side events such as panels, workshops, interviews and reading theaters within the scope of its Learning and Development Program as it does every year. The festival's Honorary Awards will be presented to dancer and choreographer Geyvan McMillen, director Işıl Kasapoğlu and Belgian director Ivo van Hove this year.

Among the festival’s productions prepared by local theater ensembles, “Ben ‘Sevgili Milena’” (“I, ‘Dear Milena’”) explores the relationship between lovers Franz Kafka and Milena Jesenska, weaving in some artistic liberties. It entwines Kafka's real letters with Milena's fictionalized responses, inviting the audience to imagine the passionate love affair that unfolded in Europe in the 1920s.

“kOmİk” (“funny”) is a tragicomic play written by Sami Berat Marçalı, revolving around the struggle between a couple that repeats in an endless cycle. The couple confines their love that lasts for years to the first five minutes when they meet, and they try to define their yearslong relationship based on those five minutes.

In “Tut! Bırak!” (“Hold! Leave!”) monologues by women of different social strata, cultures and environments, selected from Deniz Kaptan’s book “Kadın Hikâyeleri” (“Women’s Stories”), merge into one body, incorporating the identity of actress Leyla Önlen on the stage. Words are intertwined with dance and installation to tell the stories of women.

Theater Play Box ensemble will present three short plays. “Sonrası Sessizlik” “(Silence Ensues”) depicts Shakespeare’s Hamlet. This play is followed by “Karanlık” (“Darkness”), which whispers in our ears the morbid phenomena ingrained in our cultural codes through familiar melodies and drags us into colorful darkness. The last play, “Ölü Kadınlar Diyarı” (“The Land of Dead Women”), brings us the voices of women killed by men, from the afterlife.

Another play by Turkish ensembles is Anton Chekhov’s last play “The Cherry Orchard." The characters of the play are narrating a story for future generations while trying to cope with the great changes they are undergoing in their lives.

“Ben Anadolu” “("I am Anatolia”) brings together women who have improved Anatolia for thousands of years, with their stories spread out throughout history. The women’s play, which bears witness to various eras of Anatolia, will be performed in memory of actress Yıldız Kenter on the first anniversary of her death.

Ray Bradbury’s “Fahrenheit 451,” the cult novel of dystopian literature, will speak about our era and world from the stage with a performance by Turkish actors this time.

“Dublörün Hikayesi” (“The Story of the Stuntman”) portrays the story of Kemal, who has always aspired to become an actor but was forced to spend his life as a stuntman. It is a barrel of laughs enlivened by the stuntman's high-tempo performances.

“Map to Utopia,” a joint project of Istanbul-based Platform Theater and Bonn-based Fringe Ensemble, transforms the passive audience into active participants. It imagines a city in future that suggests people listen to each other despite their differences. The performance creates a fictional simulation of four different neighborhoods with 20 avatars, inviting the audience to build a new character in these places. Audience or participants can join the play from the privacy of their homes via Zoom and a special mobile app designed for the play.

“Ifigenya” ("Iphigenia") is a classic from Euripides, one of the three great tragedy writers of Ancient Greece. The play focuses on ritual sacrifice addressed in different mythologies.

“Gomidas” is a journey into the life story of Gomidas, a great artist and musician and music researcher who lived during the Ottoman period and left an indelible mark on Armenian, Ottoman and world culture.

“Ne Düşündüğünü Biliyorum” (“I Know What You’re Thinking”) is a universe of motion and sound designed by choreographer Ayrin Ersöz together with Canan Yücel Pekiçten, Bengi Sevim, Magda Skowron, Hasan Yoksulabakan and Ömer Vatansever. The mesmerizing performance and music is likely to entrance the audience.

In their “UNUTMAK Bir Hatırlama Projesi” (“THE RECALL A Remembrance Project”), the Mekan Artı team, who has previously taken the audience on different theatrical journeys in the city with their venue-specific play projects, transforms Istiklal Street into a “playground." During the play, the audience will be going on a tour of the nooks and long-forgotten venues of Beyoğlu through the 100-year-old life story of retired journalist Aret.

In “Feramuz Pis!” (“Feramuz Dirty!”), the festival audience will witness a Syriac family who has emigrated from southern Mardin province to Istanbul as well as their family heirloom house in Feriköy neighborhood. The play is a multilayered contemporary tragedy about the story of “the other” who wants to pursue his own dreams while staying close to his family.

“For No Good Reason” (“Pour un oui pour un non”) is an audio theater production about the place of language in our relationships and lives and the unseen-yet-felt judgments that seep through bilateral relations.

“Her Güne Bir Vaka” (“A Case for Per Day”) is about seven COVID-19 stories from seven women named after the days of the week.

“Lear Mutfakta” (“Lear in the Kitchen”) answers the question of what kind of play and food would emerge if Shakespeare’s "King Lear" were staged in a kitchen.

Taldans, a contemporary dance duo consisting of Mustafa Kaplan and Filiz Sızanlı, maintains its sound, rhythm and movement-centric style in their new work “Andan Daha Kısa” (“Less Than No Time”). In the play, they explore the original dynamics of the musical movement of serialism. In their new project, Taldans explores the mathematics of nature and emotions through series and sequences.

“Olağan-İçi Bir Gezi” (“A Walk in the Ordinary”) invites the audience to undertake an unusual journey from the safety of their own homes in a time when we stay at home more than ever before. Participants will enjoy a performative experience from their homes, led by a guide who will call them through their headphones, just as they are touring an art gallery.

“Terkedilmiş Kıyılar // Negatif Fotoğraflar” (“Deserted Shores // Negative Photographs”) is a combination of video, sound, performance and installation that is performed without bringing the players and audience together in the same space. It builds its narrative through a family dinner where family members cannot get together.

MoMoAcT, a Berlin- and Istanbul-based interdisciplinary art production initiative, will be restaging “Dumrul ile Azrail” (“Dumrul and the Grim Reaper”). their first retrospective play. Adapted from author Murathan Mungan’s story, the play uses storyteller Dede Korkut’s Deli Dumrul story as a reference. Having being staged for the first time at Istanbul Theatre Festival in 2000, “Dumrul ile Azrail” explores the concepts of memory, narrative, life, death and love with their new players and a new conception of staging.

Despite the pandemic, the festival brings four international projects to the audience this year. “Diagonale Ascendante,” the opening show of the festival, is a dance project performed by the French troupe Retouramont and choreographed by Fabrice Guillot. Nathalie Tedesco and Fanny Gombert question the limits of their bodies in ascension and the energy of their bodies by climbing a steep structure.

The international dance troupe Club Guy & Roni will be taking part in the Dutch Selection section of the festival with their latest dance. The performance will be broadcast live from the Netherlands. Having received appreciation from the audience for their unique interpretation of classical ballet, the troupe adapts “Swan Lake” to the stage in a unique style.

“Who Killed My Father?,” another part of the Dutch Selection, is an adaptation from the third autobiographical novel by Edouard Louis, one of the most notable writers of recent years.

“Dopo La Battaglia” (“After the Battle”) by Pippo Delbono is a composition that opens wide the doors of our existential darkness, in a constant stream that goes through the gap it has created. The words of writers and poets such as Antonin Artaud, Franz Kafka, Alda Merini, Pier Paolo Pasolini, Walt Whitman, Rainer Maria Rilke and Alejandra Pizarnik, will echo once again in this quasi-ritual performance.