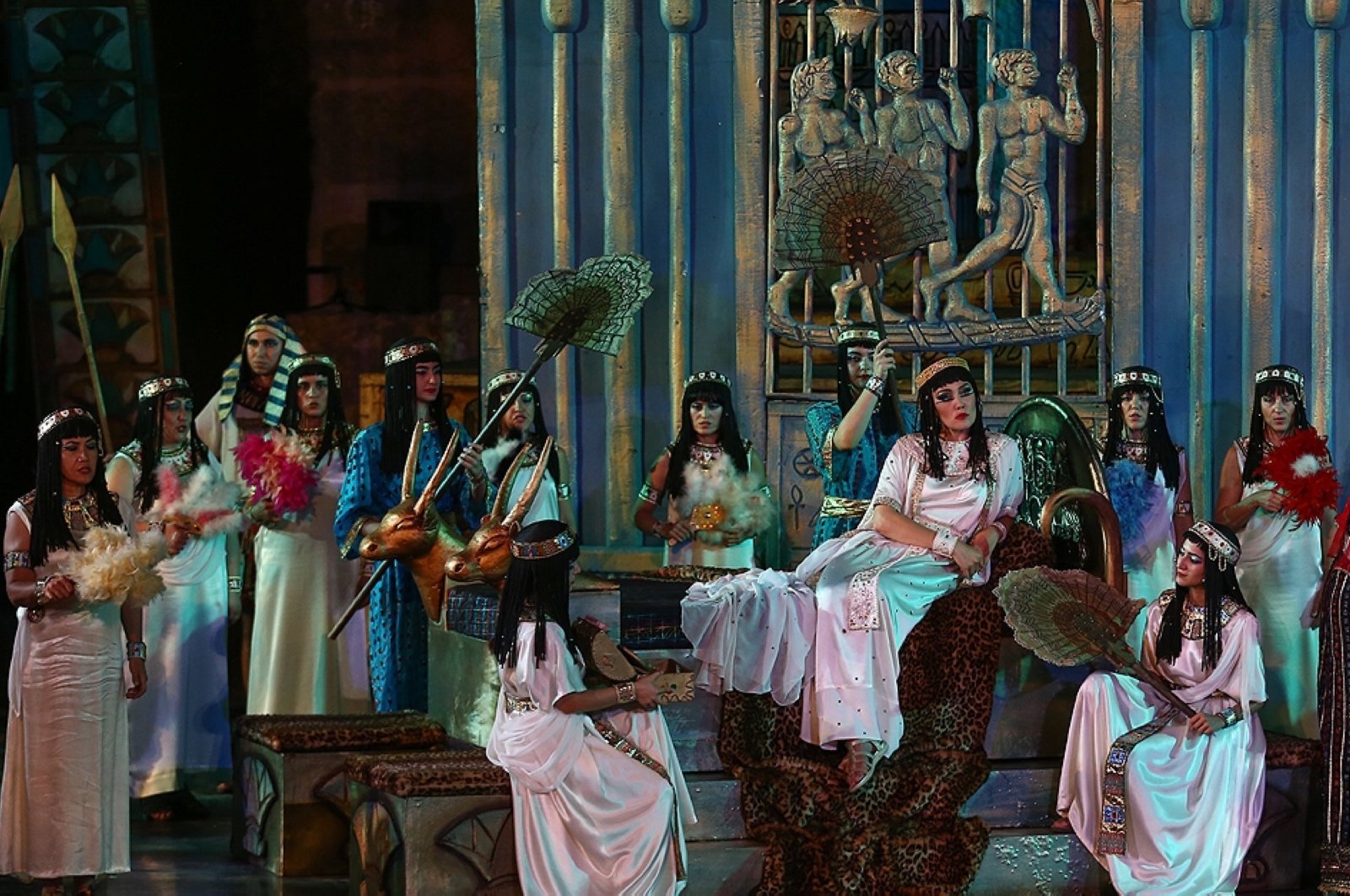 A scene from the "Aida" opera performance at the Aspendos ancient theater during the 26th Aspendos Opera and Ballet Festival, Antalya province, southern Turkey, Sept. 13, 2019. (AA Photo)
by Anadolu Agency Sep 03, 2020 10:41 am
RECOMMENDED

The 27th Aspendos International Opera and Ballet Festival, organized by the General Directorate of the State Opera and Ballet of the Ministry of Culture and Tourism, will begin Saturday and run through Sept. 12.

Having been held in the magical atmosphere of the ancient Aspendos theater in southern Antalya province for 26 years, the festival has a large following of admirers from Turkey and abroad. Hosting many local and foreign artists and ensembles, the festival contributes to Turkey’s culture and art tourism in line with the objectives of the Ministry of Culture and Tourism.

According to a statement by the State Opera and Ballet, the festival will be held in a safe environment with a new seating arrangement for the audience and orchestra in line with hygiene and social distancing rules determined by the Ministry of Health within the scope of the fight against the coronavirus.

Due to the pandemic, the General Directorate of the Stata Opera and Ballet previously announced that Turkey's opera and ballet festivals this year will only feature concerts, rather than ballet and opera performances. Therefore, the Aspendos International Opera and Ballet Festival will be organized with three concerts in which outstanding works and popular artists will be on stage following pandemic rules. The event will kick off Saturday with a gala concert performed by the Antalya State Opera and Ballet Orchestra under the baton of maestro Murat Cem Orhan. Opera singers who have proven their success on Turkish and world stages – including mezzo-soprano Ferda Yetişer, soprano Simge Büyükedes, tenor Efe Kışlalı and baritone Eralp Kıyıcı – will entertain the audience.

During the 80-minute concert – organized to cater to audiences of all ages and walks of life – soloists of the State Opera and Ballet will perform arias from popular and distinguished operas, Neapolitans and popular songs.

The festival program will continue with a concert titled “3 Sopranos – 3 Bassos” of a rich repertoire on Wednesday evening. During the concert, soloists Funda Ateşoğlu, Çiğdem Önol, Esin Talınlı, Tuncay Kurtoğlu, Tevfik Rodos and Zafer Erdaş will be accompanied by the Antalya State Opera and Ballet Orchestra under the baton of maestro Tulio Gagliardo Varas.

The 27th Aspendos International Opera and Ballet Festival will end with the "Young Opera Stars" concert on Sept. 12.

The festival will provide an opportunity for the audience to relax after the challenging pandemic period through the healing, peaceful and unifying art of music.

Derailed by the pandemic, the State Opera and Ballet began returning to the stage following the normalization period that began in June. The first concert since mid-March was held in an open-air antique theater in June.

The State Opera and Ballet will continue to observe the same hygiene and social distancing rules that it followed in these previous concerts, which set an example for the world.

Social distancing rules between families and couples will be observed in the outdoor seating arrangement. During the performances, tickets will be sold for a maximum of half of the audience capacity of the venues.

The social distancing arrangements and safety measures taken on stage and backstage will help protect the health of the performers and other staff. In addition, music stands for musicians playing wind instruments in orchestras will include innovative, plexiglass barriers.