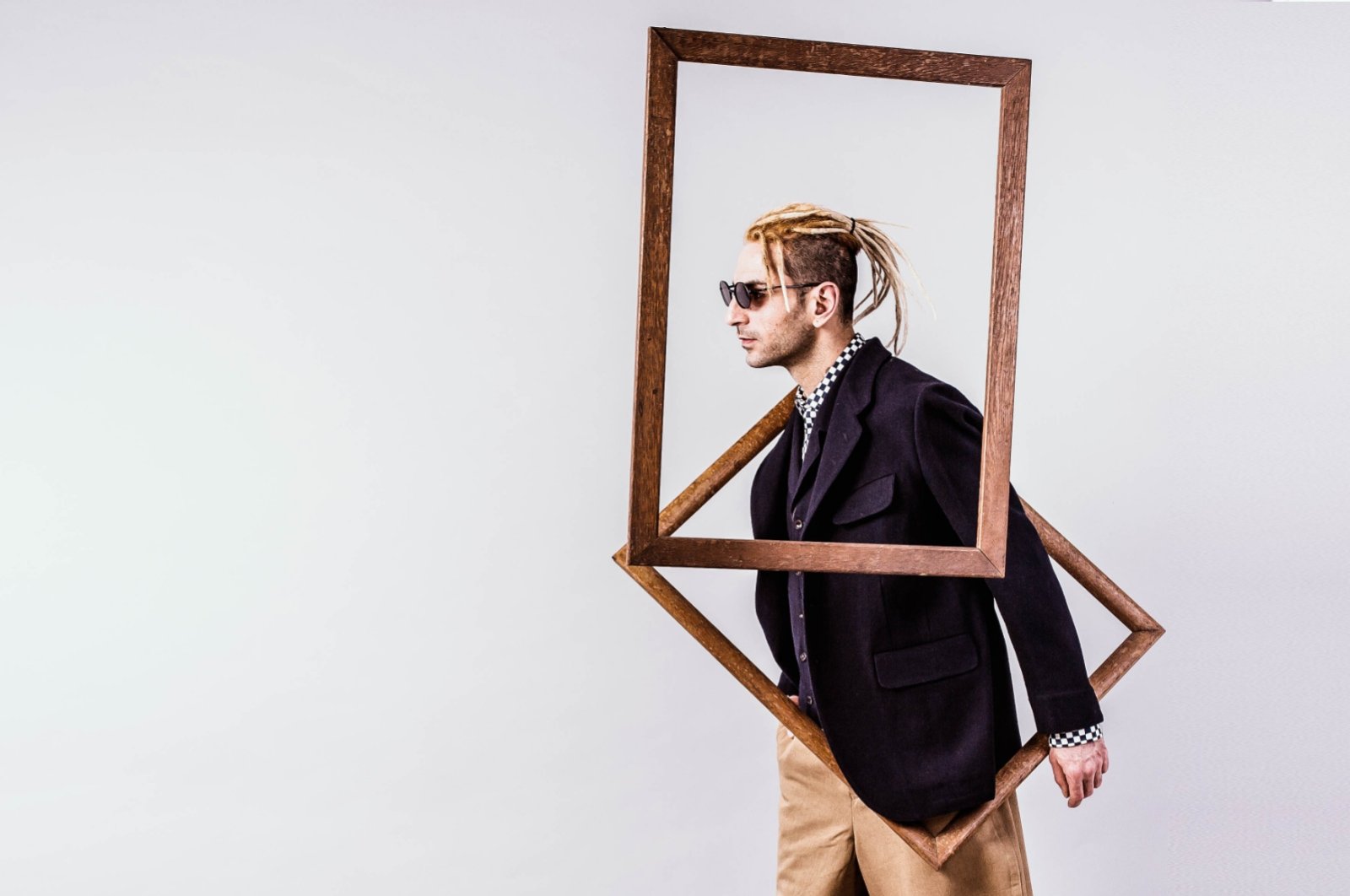 Berk Duygun's performances are based around the characters and alter egos he develops.
by İREM YAŞAR Mar 18, 2020 2:38 pm

While representing Turkey abroad through the artwork and music he produces with a universal perspective that brings people together without discrimination, Berk Duygun comes to the fore as an interdisciplinary artist of the contemporary period

It seems interdisciplinarity has become common in today’s art world. While in the past painters only dealt with painting or sculptors only created sculptures, a new generation of artists has started to explore different disciplines all at the same time. The reason being is that learning a new subject or technique has become easier with the contemporary way of life, which in turn leaves us unsatisfied about what we are doing. Contemporary artists are also affected by this dissatisfaction and have changed their practices to be more interdisciplinary. These artists cross boundaries, explore new ideas and gain new experiences.

Berk Duygun is one of today's interdisciplinary artists. Duygun performs as an artist, curator, music producer and DJ. Daily Sabah talked with the artist about his experience in various disciplines.

Born in Istanbul, Berk Duygun spent part of his life in Germany. In his 20s, he had the opportunity to receive one of the best educations at the Royal Academy of Art in the Hague, which is a renowned art school founded in 1682, making it the oldest in the Netherlands and one of the oldest in the world. Since then, he graduated from the Department of Fine Arts of the academy and has been organizing events that integrate different branches of visual and audio arts as well as producing art and music and representing Turkey in Europe.

Duygun mostly dedicates his time to his productions in performance, sculpture and music. Explaining that he started DJing during his first year in the art academy, Duygun said: “In the beginning, I wasn’t interested in DJing. I aimed to produce my tracks back then. During the live performances, I would blend them with the samples from other producers I admired. After years of actively being a musician in the classic meaning of it, my instruments started to limit me. I wanted to have full control of every sound that was played on the stage, to be able to achieve what I had envisioned. This is how I got involved in the DJ scene.”

When first starting as a DJ, Duygun aimed to reach other creative minds who needed a platform and a stage for their unusual creations. It continues to be a challenge for contemporary art students to find any stages or locations interested in the unusual, experimental tunes they play. “We had to start organizing our exhibitions and house parties. Now over the years, we have grown into a big family, involving art initiatives, music collectives and have had larger scaled events. These events in our portfolio help us find locations way easier now. More importantly, we managed to achieve a very energetic collective atmosphere in each event.”

While developing his art of music and making connections to provide suitable spaces for him to use his music, Duygun also started to make use of technology in his productions in line with the current changes. Starting with simple drum sequencers, pads and samplers, he was interested in being able to perform his electronic compositions live, which was extremely time-consuming for him. This is why he decided to try APCs and CDJs, which are specialized digital music players for DJing, to see if he could accomplish the same results on stage.

Duygun thinks that deciding which track to play next depends on different circumstances while performing. “The tracks can follow the emotions and the atmosphere of the event. Or it can be just because of a technical reason like the characteristics, melodies, rhythms of two different tracks completing and complementing each other in musical ways,” he said.

When he speaks of his approach to art and being an artist, Duygun said he had a very hard time describing his art and artistic statement during his studies. The artist noted: “My approach is not black and white, but more in the grey space, in the middle. All fields of art can be integrated to elevate and achieve an idea. My practice is not about mastering one specific field or hyper-focusing on the technical side of achieving to master the field. It is to experiment, to discover the uncanny, to not keep a common audience, but the young creative minds surprised, excited for art in every work.”

How do new ideas occur to artists? Their creative process is something like magic. According to Duygun, his performances are based around characters and alter egos he would develop, usually representing a certain state of hierarchy in society. “Although I admire performance pieces focused on the physical aspects of the human body and nature, I would rather put myself in a position that I would have to challenge my mental capacity by acting unusual in formal or public spaces such as exhibitions or festivals, while requiring social interactions to be able to activate the work. To be able to make these characters convincing enough, I would organize entire art events, build large-scale works and go through anything else that is necessary, such as building a car gallery, even to learn how to drive,” he continued.

Since his work has its base built around opportunistic approaches and is highly inspired by situationism and Dada, Duygun said the ideas come directly to him from what sort of art event it is going to be held in, what kind of happenings will take place and the considered profile of the visitors. “It is very site, time and event-specific. Mostly, after all, it starts with a very small idea that sparks other ideas, from which the project takes on a life of its own,” he said.

The artist’s last performance was “Art Safari,” where he drove visitors into a garden full of artwork in a mobile gallery that he built himself. “While describing the works in a storyline, I created an alter ego which was a mix of a mentally disturbed safari guide and a proud gallery owner/curator,” he says. Right before “Art Safari,” he held several art auctions, where he prepared performances around the sale of the works, featuring the creators of the artworks along with him. Duygun tells his experiences about this project: “My role as the auctioneer was to build a pastiche to the most known auction houses in the art scene. I was interested that those auction houses were mainly focused on the entertainment of the audience to raise their prices, instead of focusing on the artwork that was being auctioned and their real value during their auctions. For the performance, I had to listen to a lot of sports events such as horse riding and football games to be able to fasten my speech and improvisation with the words, along with the crowd control.”

Duygun also works as a curator. Noting that it was a naturally evolving slow phase for him at the beginning, he said, “It was all about gathering the other artists around me to present our work together.” He continued, “I was not aware that I was the curator in these exhibitions, nor wanted to focus on it. It was my teachers and mentors who suggested that I focus on the aspects of curating although I did not want to credit myself as a curator to not cause any forms of hierarchy on the events. Time after time I became more aware of the role of the curator in an art exhibition. From then on, I perceived curating as one of the disciplines of art.”

For him, being a curator in today’s world means chasing an idea, placing the correct mindset and artists to the right places, where they can work freely within the context. While serving as a curator, he tries to surround himself and visitors with artists. “This allows me to be able to learn from the work process, and the exhibitions myself. It basically is to create the right atmosphere, where many like-minded individuals coming together under one massive goal. It is not only about the end process or the artworks that are exhibited. The more important layer for me is as well as to create an entire experience for the artists,” he says.

Duygun continues his productions in various fields as an interdisciplinary artist and tries to find his authentic voice in the world of art as a young member. The artist of Turkish origin got involved and blended in the European art realm so quickly after his years studying that he could not find a chance to produce or exhibit work in Turkey yet. However, he will take the stage in Istanbul in April with the organization of the Rotterdam collective Every Day is Friday and his initiative Royal Surf Club by the initiative of Jurnal Music Co and Erkan Duygun and meet art and music lovers in the city.

Another future project by the artist is a new mobile gallery for “This Art Fair” in Amsterdam. Within the Art Fair, he will be allowed to host again his curation of works from other artists, but the details will be a surprise. You can follow the artist from his website to hear more about the details of his future plans.