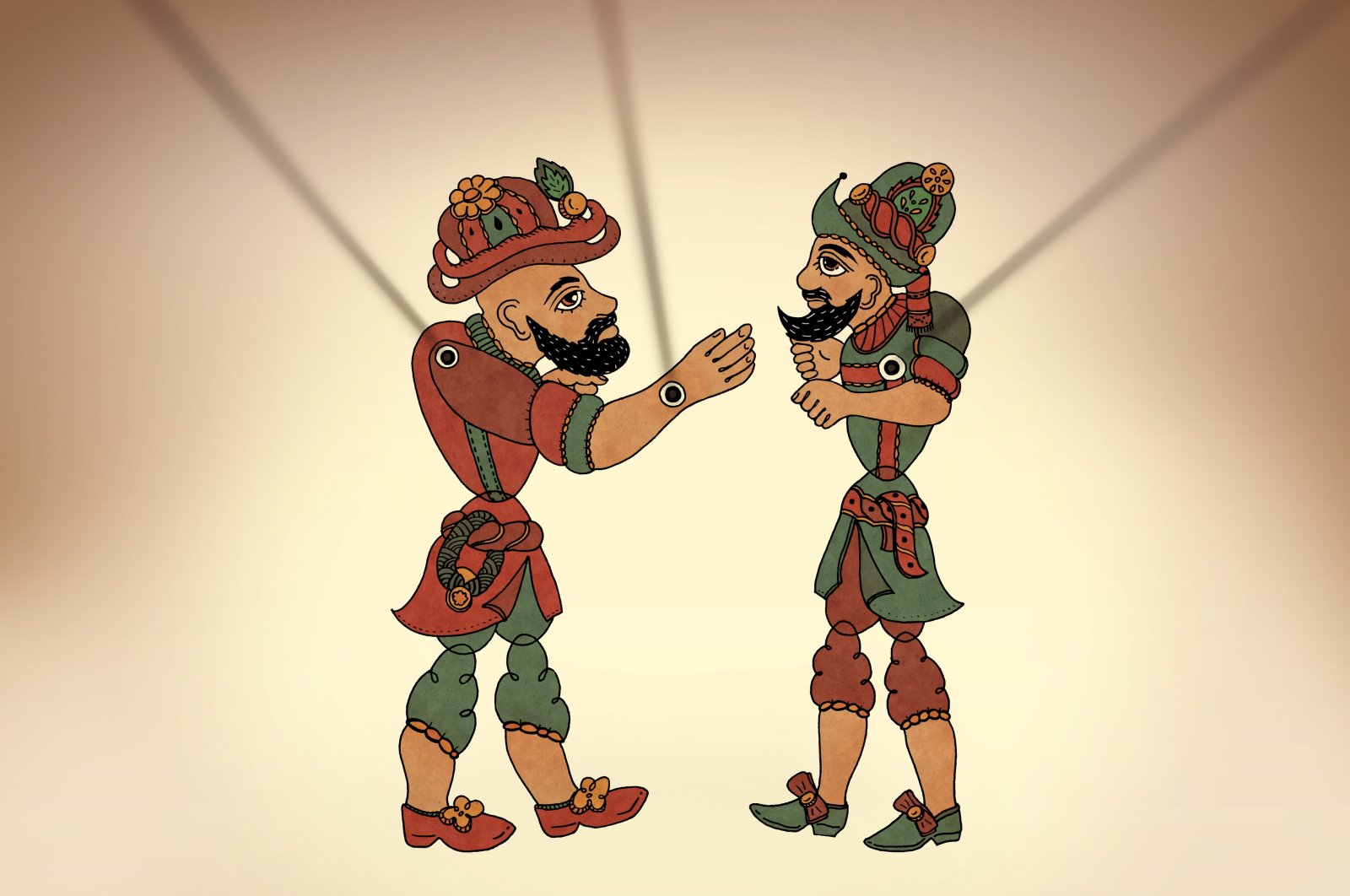 'Karagöz and Hacivat,' a popular shadow play during the Ottoman Empire before the arrival of cinema, was entertainment but included Sufi elements on the understanding of being and the universe

Before photography and cinema were introduced in the world, the Ottomans created a tradition of performing arts using the power of curtain and light. One of the performing arts of the Ottoman era that is sinking into oblivion today is the shadow play, more widely known as “Karagöz and Hacivat.”

While our understanding of the art of watching has changed considerably with the discovery of cinema, a branch of modern arts, the cultural richness of “Karagöz and Hacivat” that grew over centuries is an unexplored treasure. Although this shadow play comes to mind with its humorous, comedic and satirical aspects, it is hardly ever known to contain Sufi messages. In fact, it has a rich and deep universe of thought that contains themes from the works of Sufi scholars such as Ibn Arabi and Mevlana Jalaluddin Rumi.

Half true, half myth

There are various rumors about the origin of “Karagöz and Hacivat.” Some researchers attribute it to the relations between Asian Turks and the Chinese, who have a deep-rooted tradition of shadow play. Based on this, they believe that the play may be from Central Asia. However, Central Asian Turks are completely ignorant of it.

Another rumor is that the play may have come with Roma people who migrated from India to the West. But this is not a satisfactory explanation, either, as there is no well-established tradition of shadow play in India. Also, shadow play hardly ever exists in northern India, from where Roma people came. After all, although the Roma people’s migrations took place in the 11th century, there was not the slightest trace of shadow play in Anatolia until the 16th century.

We see the initial information about this shadow play in the Ottoman documents of the 1500s. The first one to use the name “Karagöz” was the famous Ottoman traveler Evliya Çelebi. According to rumors, Karagöz and Hacivat are half-true and half-mythological characters.

According to Evliya Çelebi, they lived in the time of the Anatolian Seljuks. Karagöz was a Roma named “Sofyozlu Bali Çelebi” and worked as a stableman for the emperor. Hacivat was a courtier of the Seljuk Sultan and called “Yorkça Halil.” They met sometimes and entertained the public with their jokes, which turned into a shadow play in time.

However, puppet masters tell a different story about these characters. According to them, Karagöz was the ironsmith while Hacivat was the foreman at a mosque built in Bursa, Ottoman Empire's first capital in northwestern Turkey. The mosque was constructed by the order of Orhan Gazi, the second bey of the Ottoman Empire after his father Osman Gazi. During the construction of the mosque, they always joked with each other. While other employees were entertained by their jokes, they also forget about their duties. Seeing that the construction did not progress even if it had been months, Orhan Gazi summoned the chief architect before him to ask the reason for it.

Then, Orhan Gazi decided to execute both of them, which led to great sadness among employees and the public. However, he had some qualms about his decision due to its negative effect on the public. He summoned a Sufi scholar named Sheikh Kushteri and asked what kind of a people Karagöz and Hacivat were. When he asked him to make a story of the dialogue between these two, Sheikh Kushteri said that he could make them play on a shadow-show screen. Thus, the Karagöz-Hacivat play culture in the Ottoman Empire was created by Sheikh Kushteri.

As of the 16th century, in particular, the shadow play spread throughout the empire; it was performed in the palace, mansions, houses and coffeehouses at special occasions such as marriages, births, circumcision feasts, Ramadan nights and Qurban Bayram (Eid al-Adha). Until the early 20th century, the play was in great demand both among the public and in the palace.

The shadow play consists of four parts: “mukaddime” (introduction), “muhavere” (conversation), “fasıl” (main play) and “hitam” (ending). The puppeteer behind the curtain is called “hayali” and can make changes to the content of each section.

As part of the introduction, some showpiece depictions and words that have sometimes nothing to do with the content are put on the curtain to attract the audience to the atmosphere of the play. Here, poems called “semai” and “perde gazeli” are read out. After a brief conversation, Karagöz and Hacivat began to bandy words with each other.

In the ensuing conversation part, the two can keep discussing a certain subject to their hearts’ content. This is followed by the main play section, “fasıl.” The subjects of these parts have been passed down from generation to generation and have developed and diversified until the present day.

The religious nature of the play manifests itself on a Sufi basis. As a matter of fact, the famous Sufi Ibn Arabi refers to shadow play in his book “Fütûhât-ı Mekkiyye” (“Meccan Revelations”). According to him, the curtain in the play is material causes which are worldly means. He says: “Most people are like little children who think that the shadow on that curtain is real. In the shadow play, young children rejoice and cheer up. And the ignorant take it as a play and a pastime, and the pundits take lessons from it knowing that God puts forth that play as an example.”

The curtain the shadow play is called “dream curtain,” “lesson curtain” or “mirror.” The mirror metaphor holds multifaceted meanings in Sufi literature. In ancient times, a mirror was made by polishing and cleaning metal. Rumi says that a person's heart is like this mirror and should always be kept clean. Otherwise, he says, “a dirty mirror reflects dirty things.”

The pieces of poems read during the play contain these metaphysical meanings. Based on the creator-universe-human relationship, the understanding of being is revealed through them. The play gradually lost its Sufi character after the 17th century within the imperial structure of the Ottoman Empire and turned into a social satire. As the Ottoman Empire expanded, so did the play repertoire and types.

After the first quarter of the 20th century, the shadow play was replaced by theater, turning into a nostalgic and commemorative material. As of 1895, the development of cinema brought about a fundamental change for performing arts on the Ottoman territory, as well as all over the world. The shows of early filmmakers such as Sigmund Weinberg attracted great attention. In cinema, the shadow player was replaced by the director, and light and shadow were replaced by projection.