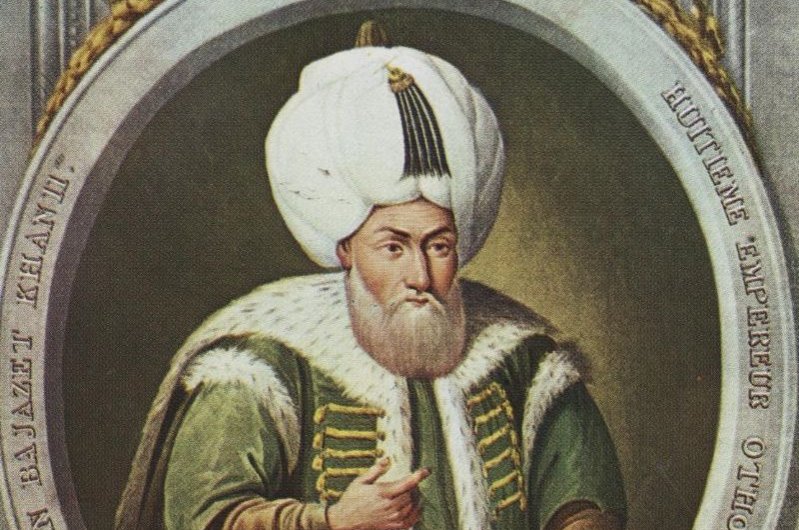 Ottoman Sultan Bayezid II is alleged to have sold the paintings and medals of Mehmed the Conqueror in the market, leading to these artworks being on the loose. But how accurate are these allegations?

When Mayor Ekrem Imamoğlu recently announced the acquisition by the Istanbul Metropolitan Municipality of a portrait of Sultan Mehmed II, believed to have been made by Italian painter Gentile Bellini, the issue became highly politicized, accompanied by many theories, especially as to the identity of the second person depicted near the sultan in the painting.

One of the theories is that this beardless person, portrayed as the same size as Mehmed II, better known as Mehmed the Conqueror, is his younger son Cem Sultan. The debate over whether the painting belongs to Bellini and the identity of the second person in the painting is the subject of a separate article. However, Christie's auction house announced that neither the Western nor the Eastern sources had information about who exactly created the painting and who the other person is.

When the issue of Cem Sultan is brought up, the comments lead to the elder son, Bayezid II, who ascended to the throne after Mehmed the Conqueror, and the struggle for the throne between these two brothers. These comments included unfair criticism of Sultan Bayezid.

Sultan Bayezid had the desire to complete his father's various conquests. He prepared the navy for the conquest of Italy through Otranto, which his father had seized. However, the problems he had with his brother Cem, who was enslaved by the Knights of Rhodes, prevented his attempts. After all, the European states could divide the Ottoman Empire in two with an army they would give to Cem. Of course, Cem could also have united the Ottomans and advanced on Europe instead of attacking to gain the throne with the power he would have obtained. That is why he was being held captive.

Sultan Bayezid’s 31-year reign, which lasted almost the same number of years as his father's, was split into two phases: The 14-year period until the death of Cem in 1495 and the subsequent 17 years. There were conquests in his time as well. However, his rule was mainly characterized by the assimilation of the conquests made by his father and the investments made in these areas.

One of the most important events during his reign was the fall of the Emirate of Granada in 1492. The eighth-century-old Muslim rule there had ended. Subsequently, the non-Christians in Granada came under tremendous pressure. They were urged to either convert to Christianity or leave without any belongings as soon as possible. Sultan Bayezid sent the navy to rescue and transport the Muslims as well as the Jews, who faced the same pressure. Thus, tens of thousands of Jews settled in the Ottoman territory, where they could practice their religion freely.

For Sultan Bayezid, the protection of the borders, the development of the country and the development of art and science were a priority – focuses he inherited from his father. It is unanimously narrated that he had a pacifist character, which explains why there were no major military expeditions during his time. There were, however, battles to end possible threats.

Sultan Bayezid's pacifist nature led him to fail to take necessary measures against the moves of Ismail I, the shah of Persia, during the last years of his reign. His son Şehzade Selim, therefore, requested his father's abdication of the throne, but he lost the fight with his father. In the later period, Bayezid II renounced the throne, leaving it to his son by his own will due to illness and old age. He died shortly thereafter in 1512. His tomb is in the mausoleum at the Bayezid Mosque, which he built himself.

Andrea Gritti, bailo of the Republic of Venice to Istanbul at the time, said in a report he sent to the senate about Sultan Bayezid II: “He is taller than a man of middle height ... He does not drink at all ... He eats a little, he likes to ride ... He respects religious ceremonies and does a lot of charity work. He is interested in philosophy and astronomy. He is engaged in the rehabilitation and arrangement of his army except for his scientific studies and observations. He increased the number of janissaries and equipped his soldiers with the best weapons.”

Sultan Bayezid II was the most knowledgeable among the Ottoman sultans after Sultan Mehmed the Conqueror. Thanks to his father, he was perfectly educated. He learned Arabic and Persian language and literature, in addition to his mother tongue, Turkish. He also knew the Chagatai and Uighur dialects of Turkish. He was trained by the best teachers of the time in Islamic sciences, logic, mathematics and astronomy.

During his reign, he was sent to Amasya as an administrator. He improved himself greatly during the 27 years he stayed here. He was interested in a number of branches of art, and was a strong poet and calligrapher. He also had an interest in the art of illumination or book ornamentation. He was among the veteran poets in the history of Turkish literature with the poems he wrote under the pseudonym of “Adli.” The sultan, known for his piety as well as his poetry, was also nicknamed “Veli” (friend of Allah) and referred to as “Bayezid-i Veli.”

Bayezid II was a sultan who read and examined all the works presented to him. Because he was a scholar and an artist, he did not give heed to works written with insincerity and flattery. As a bookworm, he added the library he had inherited from his father and all of its books to the palace’s treasury.

Bayezid II was very careful about the preservation of the library. He marked the first and last pages of the books with his own seal, and he wrote the name of the book in his own handwriting on some volumes. In almost every copy bearing the sultan's seal, the phrase “the handwriting of Sultan Bayezid” is seen.

As part of the initial efforts to make Istanbul the capital of the empire, starting with Mehmed II’s conquest of Istanbul in 1453, around 160 mosques and masjids were built and about 15 Byzantine structures were converted into mosques. These reconstruction activities continued intensively thanks to the efforts of Bayezid II. In terms of the types of building, we can see that 88 mosques and masjids were built in various ways, both as independent buildings and as members of a building complex. Apart from this, there were 13 mosques and masjids converted from Byzantine buildings, paving the way for the transformation of Istanbul into a Turkish-Islamic capital city.

Complexes consisting of mosques, masjids, madrasahs and hospitals were built not only in Istanbul but in many parts of the empire. For instance, one of them is the Bayezid Complex, which was built in Edirne in 1488. The complex, consisting of a mosque, almshouse, hospital, madrasah, bath, kitchen, tabhane (a kind of sanatorium for ill people during rehabilitation) and food warehouses, was built on a vast area of 22,000 square meters (236,800 square feet). With more than 100 domes by the Tundzha River, it was one of the largest and the most important health, education and religious institutions of the 15th century.

Architects, masters and artists gathered under the organization called “Ehl-i Hiref,” which was founded by Mehmed the Conqueror in the palace. During Mehmed the Conqueror’s rule, the work of this organization formed the basis of the palace workshops established by Bayezid II. These workshops provided the formation of styles that determined the Ottoman art of the classical period.

During the reign of Sultan Bayezid II, money, valuable cloth and gifts were given to statesmen, ambassadors, courtiers, scholars, artisans, architects and craftsmen on various occasions. In this way, the sultan preserved and encouraged science and art.

Investments made for the development of science and art were recorded in notebooks called “in'amat” (meaning bestows and favors). These notebooks show that there were artists from 33 different branches of art in the palace. According to the notebooks kept during the last eight years before Bayezid II's death, the palace supported 469 artists.

One of the criticisms about the recently purchased painting was that Sultan Bayezid II sold the portraits of his father in the bazaar due to his religious piety. However, no source was given for this claim. This was the interpretation of the Orientalist school that praised Mehmed the Conqueror as the ruler of the Renaissance and attributed him to the West.

In Islam, it is not deemed appropriate to make paintings and sculptures of living things. Islamic art is also shaped according to this understanding. As much as it is not right to judge European art through the understanding of Islamic art, it would not be right to do the opposite. As such, the portrayal of an artistic figure such as Sultan Bayezid II as an enemy of art leads us to a wrong perspective. So, it is a baseless claim that Bellini’s paintings were sold in the Ottoman bazaars and that the paintings were purchased and transported to Europe from here.

Furthermore, it was not possible to sell an object that is religiously deemed inappropriate or that belongs to the palace in the bazaar. Something like this has to be destroyed directly. After all, sultans would not want news of such a sale to be public in an era when the economic status was paramount. So, why should these paintings be sold in the bazaar?

No Ottoman source has such information, even as gossip material. After all, there is no information on whether there were paintings in the palace. If there were, it is not something that could have been avoided being recorded. So, Bellini's paintings were probably the works he made when he returned to his country.