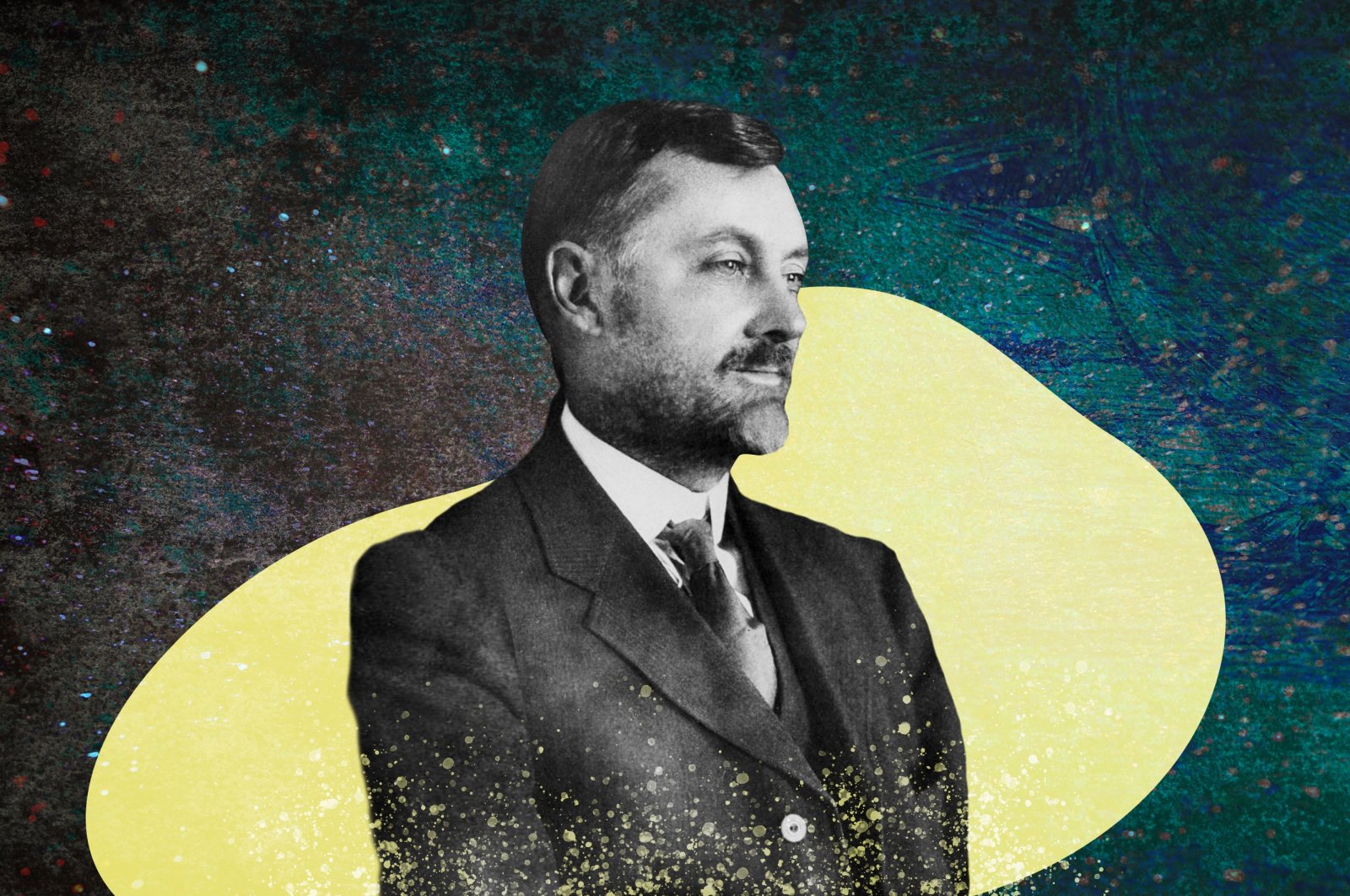 With a life that takes him across continents, from the farthest edges of the Ottoman Empire to the rising power of the United States, heir to a large industrial fortune and connoisseur of Arab culture, Chicago millionaire Charles R. Crane has even inspired characters in spy novels

British intelligence officer and statesperson John Buchan wrote a famous novel called "Greenmantle." It revolves around the story of German and Young Turks organizing an uprising against the British in the Islamic world during World War I. The protagonists of the story are Richard Hannay and his friends, who travel to Turkey to investigate this uprising and the adventure begins.

One of Hannay's friends is an American spy: John S. Blenkiron. He has a hand in the American presidential election and is quite wealthy. This character is actually inspired by Chicago millionaire Charles R. Crane.

Charles R. Crane was the eldest son of a wealthy businessperson. He was born in 1858. When his father died, the company that bears their last name was left to Charles and his brothers. Two years later, Charles withdrew from the company by selling his shares to his eldest brother. He then dedicated himself to "liberating" nations by dismantling empires.

A German-American war correspondent described Crane as follows: "An eccentric American plutocrat obsessed with the idea of freeing the oppressed people of the world ... The hero is depicted as employing not only his colossal American fortune but his brilliant American business ability for organizing a revolution throughout the world on strictly business principles. He chooses this occupation partly for excitement and partly because he is dominated by the idea that his money has been given to him to play the role of a worldwide liberator."

Crane began his mission in the Ottoman Empire from the Balkans. He pondered about the Ottoman Empire, which Europe saw as a "sick man" that should "die an early natural death." In 1909, he went to Bulgaria to try to realize the Bulgarian revolution with the money he distributed. In 1904, the Ottoman Empire came to the brink of a civil war in Bulgaria.

Crane also decided to operate in Albania. Together with the British spy Aubrey Herbert, they plotted to start the Albanian revolt. Crane financed Edith Durham, a female spy working there. He also brought the Albanian nationalist Kristo Dako from America to Istanbul in 1911, when the rebellion broke out.

Dako's wife, Sevasti Kiriazi, graduated from the American College for Girls in Istanbul and wanted to open an American college in Albania. For this purpose, Crane went to Albania from Istanbul with Dako. Dako was arrested here for bringing an American millionaire to support the rebellion but thanks to Crane's influence, he was soon released.

When Crane came to Istanbul, he stayed in the guesthouse of Robert College, the Boğaziçi University today. From 1910, he became the trustee of Robert College and the American College for Girls. When the opportunity arose, he came every year and attended the graduation ceremonies. In this way, he had the opportunity to get to know Halide Edib, a graduate of the American College for Girls, who taught there. But his real rapprochement with Edib happened when he arrived with the King-Crane Commission in 1919.

At the conference in Paris after World War I, the future of the defeated states Germany, Austria and Turkey was discussed. Upon the request of U.S. President Wilson, they decided to send a commission to Turkey. The task of the commission was to prepare a report on the future of the Turkish lands under the occupation of the Allied powers.

Crane gave the greatest support to the election campaign of Wilson, the governor of New Jersey, whom he met at his home in the summer of 1912, and was confident that he would become the U.S. president the following year. Maybe that was why he was elected as the head of the commission, which Wilson sent, along with Henry King, the rector of Oberlin College. While Crane was traveling from Paris to Istanbul, he wrote the purpose of his travels to his wife: “We are on our way to carving Turkey."

The commission departed at the end of May while the Peace Conference continued. Syria, Palestine, Mesopotamia, Cilicia and Armenia, which they intended to separate from Turkey, were their main targets. They met in Istanbul in July 1919. Meanwhile, the Greek army landed in Izmir and Mustafa Kemal Pasha was sent to Anatolia upon the request of the Entente Powers.

Crane and Edib had started correspondence even before the commission arrived in Istanbul. Edib informed him that Mustafa Kemal was the leader of the defense movement that had started taking shape in Anatolia. At the beginning of August, she wrote to Mustafa Kemal, told him about Crane and advised him that American aid would be very beneficial for the National Movement.

In her letter dated Aug. 10, where Edib talked about the opposition to the sultan's government in Istanbul, she described Mustafa Kemal to Crane as follows: “He is an educated man and a very brave officer; One of the heroes of Çanakkale. Enver's personal and political enemy. For the last five years, one way or another, he was determined to keep the notables of the Movement out of political activity. His statements are reasonable, patriotic and leave a good impression on the intellectuals of all sects ... Other leaders, more or less, come after him, Mustafa Kemal Pasha is the head of them all.”

The defense associations of the unionists organized a congress in Sivas. The chairperson of the congress was Mustafa Kemal. Upon the pasha's request to meet with him, Crane sent the correspondent of the Chicago Daily News, Louis Edgar Browne, in his place. Browne credited him with having previously worked for him in the Bolshevik revolutions in Russia.

Britain, which wanted to put the financial burden of administering Turkey on the U.S., offered President Wilson a mandate. Learning about this, the members of the Congress in Sivas handed Browne a petition signed by Mustafa Kemal. They wanted the United States to administer Turkey on behalf of the League of Nations and demanded a delegation to conduct investigations.

Wilson returned from Paris in September 1919. He knew that the U.S. Senate did not favor mandate protection. The King-Crane Commission was also against the disintegration of Turkey. For Armenia meanwhile, it alone was not worth the cost of the mandate. Thus, the idea was shelved. Hearing this, Mustafa Kemal also abandoned the idea and harshly criticized those who still defend it.

The commission decided that an Armenian state in Eastern Anatolia would not be appropriate due to the small Armenian population. Thus, U.S. policy abandoned the Armenians, whom it had been protecting for years, to their fate and supported the Young Turks. The only benefit of Crane for the Armenians was that orphaned children of the community were to be brought to America through a charity called Near East Relief after they were exiled by the Unionists in 1915.

In February 1920, Crane came to Istanbul again. The next month, Edib moved to Ankara, where a new government was being formed and joined the Nationalist movement. In May, President Wilson sent Crane as an ambassador to China. However, Crane and Edib continued to correspond through the American Embassy in Istanbul and the American Admiral Bristol, who worked there.

Meanwhile, Edib's two sons had remained in Istanbul. She asked Crane to take care of them, so his office in New York had the children brought to America and placed at the University of Illinois. Thus, Edib was not held back by her responsibilities and became the press spokesperson of the Ankara Movement.

After the Greek Army was defeated and Izmir recaptured, Crane returned to Istanbul in November 1922. He was there when Ankara's army entered Istanbul. Meanwhile, he finally found the tomb of the founder of the Islamism movement, freemason, Jamal al-Din al-Afghani in the city which he had been searching for, and had a beautiful tomb built on it.

His friendships with Edib continued after the establishment of the Turkish republic. Crane even financed some of the books written by her and when Edib fled abroad with her husband.

In 1924, upon the request of Mustafa Kemal, the head of the new republic, Crane sent the educator John Dewey to Ankara to develop the Turkish education system. But Crane's biggest help to this state was to turn Hagia Sophia into a museum.

Archaeologist Thomas Whittemore hosted a dinner at the Tokatlıyan Hotel in Istanbul on June 12, 1929. The main topic of discussion at the dinner was to turn Hagia Sophia, the symbol of conquest for the Turks, into a museum. Among those attending the dinner was Richard T. Crane, son of Charles R. Crane.

Whittemore was a professor known for smuggling rare historical pieces to America for wealthy families like the Rockefellers and Cranes. He worked with Crane in Petrograd, Russia during the February and March Revolutions of 1917. Crane, who brought Leon Trotsky from America to Russia for the revolution, sent the huge bells from the Danilov Church in Moscow to America via Whittemore.

George Pratt, son of one of the shareholders of Standard Oil owned by the Rockefeller family, discussed the issue of Hagia Sophia with Halil Edhem Bey, brother of the famous painter Osman Hamdi Bey and director of the Istanbul Archeology Museum. Halil Bey also talked to Joseph C. Grew, J. P. Morgan's cousin and American ambassador, and asked Mustafa Kemal for permission to restore Hagia Sophia. After obtaining permission, the Byzantine Institute was established in 1930. Crane, along with his friend Rockefeller, became a financier of this institute. Whittemore was elected as the director of the institute.

Apart from the Bolsheviks, Crane, who knew Libya's Idris es-Senusi, Yemen's Imam Yahya, Arabia's Sharif Hussein, Faisal of Iraq, in short, almost all modern leaders, was also closely involved with the development projects in these modern states. In 1925, he founded the Institute of Current World Affairs in New York.

In 1931, he went to Saudi Arabia to discuss economic cooperation with King Abdulaziz bin Abdul Rahman Al Saud known in the West as Ibn Saud. He was recommended to Ibn Saud by the British spy John Philby, who was advising the king. On his way, he took George Antonius from the foundation with him.

Born in Lebanon to a Greek family, Antonius studied at Cambridge. At the beginning of the world war, he acted as an intermediary in the correspondence between the British and Sharif Hussein. After the war, he worked in the British Mandate Administration in Palestine.

Crane had four long talks with King Abdulaziz, with Antonius' interpreter. Ibn Saud was surprised at how much the American knows about his hometown. Crane, on the other hand, found Ibn Saud more of a Christian than an average Christian.

Ibn Saud accepted Crane's offer to search for water and minerals in Arabia. But surprisingly, instead of finding water, they discovered oil. Thereupon, Ibn Saud signed an agreement with Standard Oil, just as the Bolsheviks had done in Russia.

Crane also met the mufti of Jerusalem, Mohammed Amin al-Husseini, through Antonius. Al-Husseini was appointed mufti after the war by Herbert Samuel, the Jewish inspector of Palestine.

Crane financed the Arab Revolt of 1936-39, led by al-Husseini. In fact, Crane went to Germany and met with Adolf Hitler, whom al-Husseini loved very much. Antonius attributed his 1938 book "The Arab Awakening" to Crane, affectionately nicknamed, Harun al-Rashid.