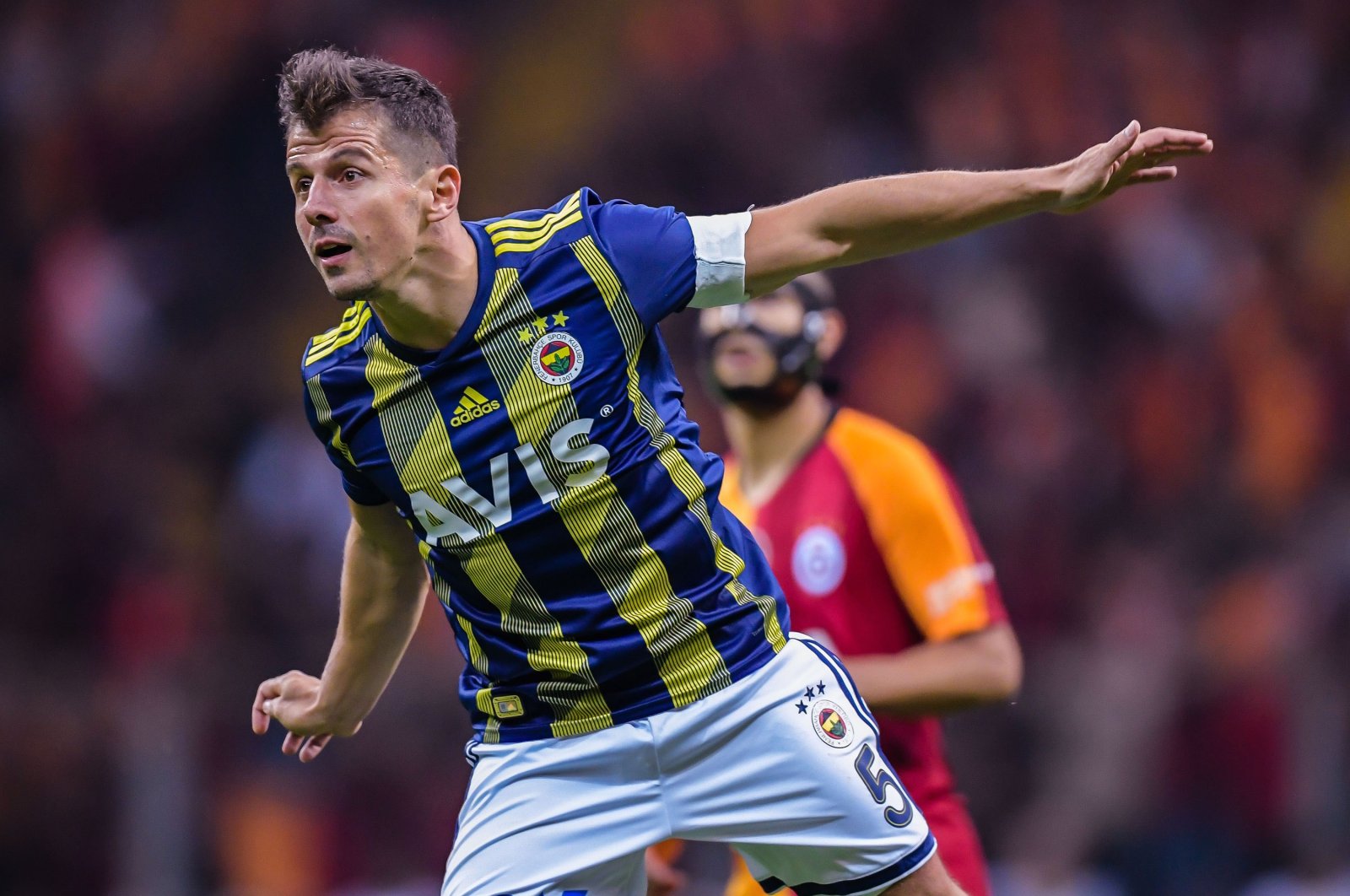 Emre Belözoğlu, during a Turkish Süper Lig match between Galatasaray and Fenerbahçe, at the Türk Telekom Stadium, in Istanbul, Turkey, Sept. 28, 2019. (Getty Images)
by Hakan Arslanbenzer Sep 26, 2021 11:46 am

For decades Turkish footballers rarely played in top European leagues, until the new millennium introduced maybe the most extraordinary player to the international stage, Emre Belözoğlu

Until recent years, very few Turkish football players could demonstrate their skills in the top European leagues. The question of who the first Turkish footballer was to play for a foreign club remains unsolved since historical facts require interpretation. Sabri Mahir, a graduate of Galatasaray Sultani (High School), skilled in both football and boxing, fled to Paris in 1910 to avoid police arrest after a fight between the players of Galatasaray and Struggles, an amateur club made up of Ottoman Greeks. Arriving in Paris, Mahir registered to and began to play for Racing Paris (now “Racing Club de France Colombe 92,” a rooted amateur football club). Though it was not a proper transfer between the two clubs, some authors accept Sabri Mahir as the first Turkish football player to be transferred to Europe.

Racing Paris acquired other Turkish footballers, too, in the 1930s and 1940s. Some sources claim that Vahap Özaltay is the first Turkish player to have been transferred to Racing in 1932 in a professional manner. Özaltay went to Paris after an official agreement between Racing and Altay (an Izmir-based club) and played for the Paris side for five seasons. Racing and Altay would make a subsequent deal for Basri Taşkavak, who became a part of the Racing team in 1941.

Others say that the first Turkish football player to make a deal with a European club was Bekir Refet Teker, known as “Bekir the Bomber,” who was transferred to the Karlsruher FC Phönix (now generally referred to as “KSC”) in 1921 from the Ittihat club after playing for Fenerbahçe for some years. Bekir the Bomber finished his career in Germany in 1928.

The 1950s and 1960s were the golden years for the professional football clubs of Istanbul. The “Milli Küme” (National League) was transformed into “Türkiye 1. Futbol Ligi” (Turkish 1st League for Football) with the 1958-1959 season, allowing the first golden generation to now play as professional career players. Of that generation, Lefter Küçükandonyadis and Can Bartu of Fenerbahçe, Metin Oktay of Galatasaray, and Şükrü Gülesin of Beşiktaş also played for European clubs, in particular clubs in Italy.

On the other hand, until the early 21st century, fewer than 50 players from the Turkish league had the opportunity to play for European clubs. And of those, not one gained any great reputation internationally. This moderate impact of the Turkish legionaries in Europe was consistent with the lower success level of the Turkish clubs in European tournaments.

It wasn't until Galatasaray’s victory in the 2000 UEFA Cup finals that the floodgates of the European football scene opened for many young Turkish talents. Perhaps, the most extraordinary one of them was Emre Belözoğlu, who began to play for Italy's Inter Milan – one of the biggest powerhouses in European football at the time – at age 20.

Emre Belözoğlu was born on Sept. 7, 1980, in Istanbul. His father Mehmet was a football player and gave his son his first impression of the sport serving as an inspiration. Though people around Emre could see his talent even in his adolescent years, his mother was the only one to oppose the notion that Emre could become a professional footballer. Emre said in an interview that he chose to walk in his father’s steps though he was closer to his mother, and she was the parent raising him.

Emre learned and played football at the Zeytinburnu club, which is a rooted football entity of Istanbul, where his coach Salih Bulgurlu applied a special program to develop the youngster’s playing skills and physical strength. Emre was proposed to Galatasaray scouts, though he was a great fan of Fenerbahçe, Galatasaray’s eternal rival, due to his father. Fenerbahçe also made an offer for Emre, but his father refused the team he supported to keep the promise he made previously to Galatasaray. Finally, Emre Belözoğlu became a part of Galatasaray's U21 team at age 15. After a year, he joined Galatasaray's senior team, which raked in four consecutive titles in the Turkish Süper Lig before winning the 2000 UEFA Cup.

Emre was a midfielder who had a special talent when it came to the technical aspects of football, such as dribbling, trapping and keeping the ball, and spraying short and long killer passes to strikers and wingers. He was also competent in the art of defense, defending against counterattacks in the middle of the pitch and pressuring the goalkeeper and defenders of the rival team.

He was a total maestro on the pitch even in his early years. When the ball was in front of Emre’s left foot, you were sure that something was coming up, something dangerous for the rival team’s defensive scheme. When he could find space to run in the middle of the pitch, he could pass the ball to his forward teammates in a 180-degree point of view and with 99.99% accuracy. If the opposing team tried to apply pressure to him, Emre would exploit the gaps and punish them; he could easily create a variety of opportunities for his team’s strikers in just one or two seconds.

Emre played for Inter in Italy's Serie A from 2001-2005 after four league titles in Turkey and one UEFA Cup win between 1996 and 2001. Though he couldn’t make enough goals and assists in Serie A, both the pundits and later fans believed in his skills. He took the Copa Italia title as part of Inter before he was transferred to Newcastle in the English Premier League.

Suffering from muscle injuries, Emre could play only half of the games during his time at Newcastle, after which Fenerbahçe’s head Aziz Yıldırım convinced him to return to Turkey and play for his team. So, Emre returned to Istanbul in 2008 to make his childhood dream happen. Returning to protests by Galatasaray fans, who considered him a traitor, and the cheers of Fenerbahçe fans, who saluted him as a hero, Emre Belözoğlu arrived in Turkey to play for Fenerbahçe after many years abroad.

Emre won two league titles, two Turkish Cup titles and three Super Cup titles with Fenerbahçe. His position in Fenerbahçe means even more to the club and to the fans. He is already one of the greatest legends of the club as a winner, captain and even a small stint as caretaker manager. He left and came back to Fenerbahçe twice, once for Atletico Madrid, where he won the Copa del Rey with his Turkish teammate Arda Turan, a Galatasaray legend, and once for Başakşehir.

In the 2020-2021 season, Emre took on the sporting director role at Fenerbahçe and coached the team after Erol Bulut’s resignation for 10 games, for which he was praised by both fans and management. However, Emre left Fenerbahçe once again since he didn’t have a professional license to coach Fenerbahçe. But everyone knows that Emre Belözoğlu would coach Fenerbahçe properly with the required paperwork.

In 2004, Brazilian football legend Pele included Emre Belözoğlu in the FIFA 100, a list of the 125 best contemporary international football players.