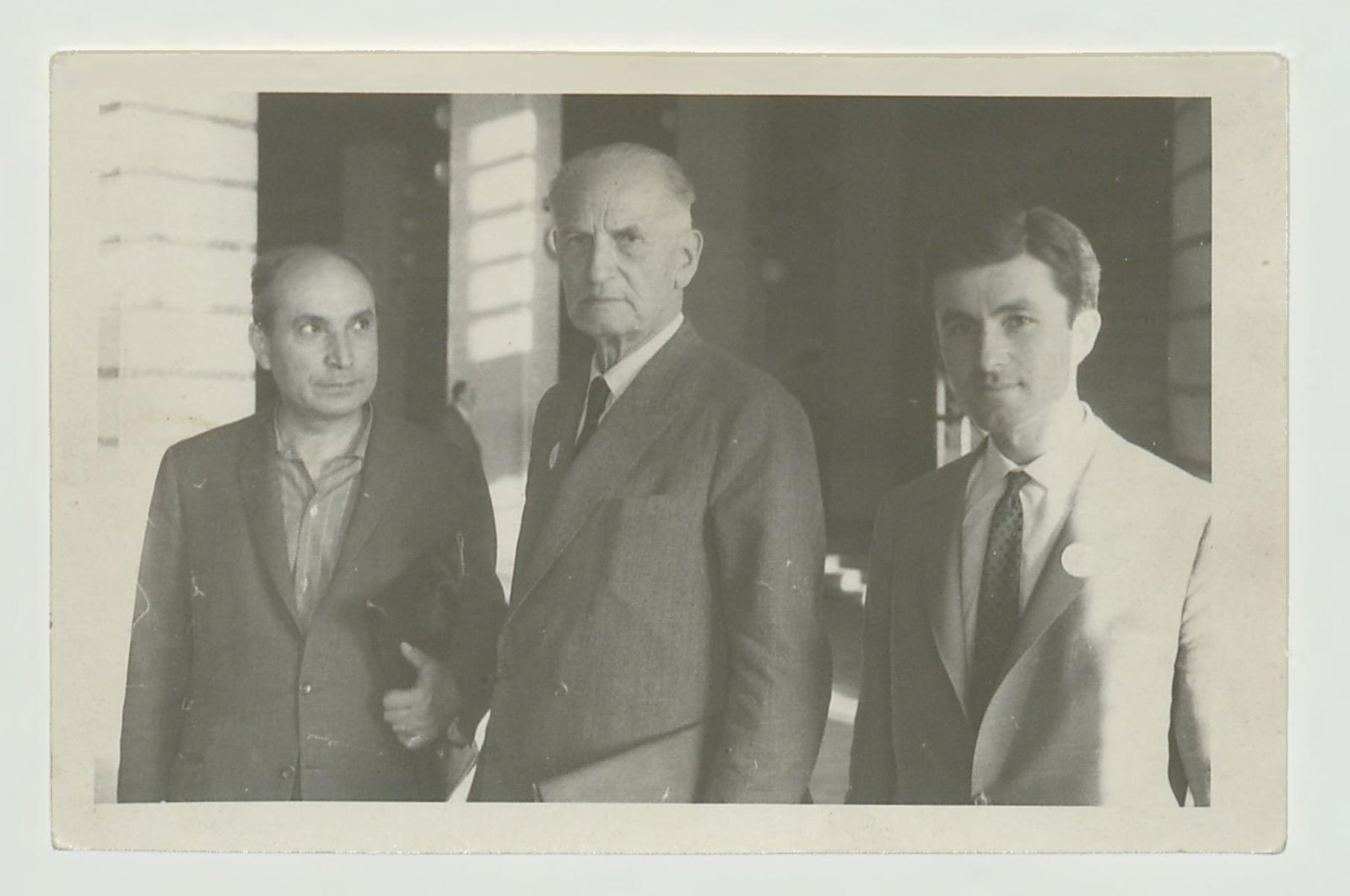 Ismayıl Hakkı Baltacıoğlu (C) with his friends Yalçın Orkun (L) and writer Haldun Özen at the Extraordinary Meeting on Turkish Language at the Language-History and Geography Faculty of Ankara University, July 13, 1964. (Courtesy of Boğaziçi University Archives and Documentation Center)
by Hakan Arslanbenzer
Nov 15, 2020 10:51 am

Turkish pedagogue, writer, calligrapher and politician Ismayıl Hakkı Baltacıoğlu was an intellectual of great importance in the history of Turkish education as the prominent representative of education reform in the country

Educational reform has always been a part of the Turkish republic but during the days of the empire, the Ottomans were inclined to think of the military whenever they attempted to make a reform. This historical difference largely arises from the fact that the Ottoman Empire was a military state, and they realized that their military supremacy over the European empires vanished after these empires settled their conflicts through the Westphalian Peace, by which the Thirty Years’ War among the European powers ended. Beginning in the mid-17th century, Ottoman bureaucrats offered the sultan a series of reforms, most of which included suggestions about a better military organization and a more balanced financial system. The Ottoman reformists had never mentioned a necessary reform in education until the Tanzimat, which is generally considered a preface to the modern Turkish republic.

Indeed, the Ottomans did many things to reform their educational institutions, but their primary consideration was the situation of military education. Military education never failed since the foundation of the Ottoman Empire. Tanzimat bureaucrats, on the other hand, conceptualized and made attempts at reform in civil education too. France, the Western ally and closest example for the Ottoman state, had already initiated a systematical elementary school education for the whole nation. This convinced their Ottoman peers to create a similar seminal education system for its population.

However, Ottoman educational reform was not entirely successful. Such factors as political and military turmoil, economical insufficiency, lack of experience, immobility and inertia in the Ottoman population and ideological conflicts prevented the Ottoman educational reformers from achieving their goals. Yet, decades of reformist action yielded some understanding and experience. I suppose the most significant success of the late Ottoman educational reform was the formation of the institutions founded to raise modern instructors, who would be the pioneers of the new Turkish educational system. Among many legendary reformists, Mustafa Satı Bey – also known as Satı-el Husri – Emrullah Efendi and Ismayıl Hakkı Baltacıoğlu deserve special attention for their enormous efforts and progressive ideas about education.

Emrullah Efendi was the minister of education after the Young Turk Revolution in 1908 while Satı Bey served as a role model as principal of the School for Teachers called Darülmuallimin during the same period. Baltacıoğlu was the assistant principal at the Darülmuallimin beside Satı Bey. He later became a committed educational reformist. He criticized but also continued Emrullah Efendi’s and Satı Bey’s understanding of reform. Unfortunately, Baltacıoğlu was among the academics who were fired after the 1933 University Reform, which is a bitter example of discontinuity and cruelty in the educational reform history of Turkey.

Ismayıl Hakkı Baltacıoğlu was born on Feb. 28, 1886, in the Cihangir neighborhood of Istanbul. His father Ibrahim Edhem was a well-educated man, who published a study on the Quran and was fond of Islamic calligraphy and painting. Ibrahim Edhem sent Ismayıl Hakkı to progressive private schools such as Şemsülmekatip, Meşrik-ı Füyuzat and the famous Fevziye Mektebi. After these elementary schools, Ismayıl Hakkı graduated from Fevziye Junior High School and Vefa High School.

Baltacıoğlu enrolled at the natural sciences department at Darülfünun-ı Osmani (today’s Istanbul University), where he learned chemistry, biology and morphology.

In addition to his official education, he worked as a clerk at the Imperial Council’s Secretarial Services and received private lessons on Islamic calligraphy. The latter would help support him financially. After school, he was assigned as a calligraphy teacher at the School for Elementary Teachers called Darülmuallimin-I Sıbyan.

Satı Bey, the principal of Darülmuallimin, advised Minister of Education Emrullah Efendi to send Baltacıoğlu abroad in order to study pedagogy and handicrafts. Thus, Baltacıoğlu visited many European countries such as France, Germany, Switzerland and England in order to study educational institutions. After three years of exploration, Baltacıoğlu returned to Istanbul to continue his work at the Darülmuallimin. Now, he was the assistant principal and helped Satı Bey in applying new findings in raising new elementary schoolteachers.

In his memoirs, Baltacıoğlu criticizes Satı Bey in two major aspects. According to his understanding, Satı Bey belonged to a constructive approach, meaning that he prioritized the construction of institutions and institutional learning. Baltacıoğlu offered a more aesthetic way of learning involving beauty, civility and nature. Baltacıoğlu’s second criticism of Satı Bey’s educational approach was more of a sociological character. He thought that Satı Bey neglected the sociological and cultural change in society and over-focused on individuality. In fact, negligence toward society in educational policy has been a systematic defect of Turkish education.

Thanks to his studies both at home and abroad, Baltacıoğlu was assigned as a pedagogy professor at the Darülfünun in 1913. He was transferred to the Ministry of Education in 1918 as the general director of secondary education. He also managed the higher education department of the ministry for a short period of time. In 1923, or after the War of Independence was won, he was assigned as the dean of the Faculty of Letters, then as the rector of Darülfünun. Thus, Baltacıoğlu became the first university rector of the Turkish republic.

However, Baltacıoğlu was fired after the University Reform of 1933, which was one of the culturally crucial revolutionary actions taken by the Kemalist single-party regime. Previously, he prepared an Organizational Reform Project for the School of Teachers, which was rejected by the regime.

Baltacıoğlu tried to survive after being fired by publishing the Yeni Adam journal, which was a failure from the beginning to the end. He had many difficulties until Hasan Ali Yücel, minister of education and a previous student of Baltacıoğlu, helped him to be assigned as a professor at the Language-History and Geography Faculty at Ankara University in 1942. He was also elected as a member of Parliament in the same year and stayed in Parliament for two terms until the 1950 elections.

Baltacıoğlu restarted the publication of the Yeni Adam after 1950. He also published another journal named Din Yolu in 1956. Both journals were not commercially successful, but he used them as platforms to defend his sociological and pedagogical ideas.

Baltacıoğlu’s focal ideas involved cultural tradition, social transition and pedagogical reformation. He was under the influence of Emile Durkheim and Ziya Gökalp. According to him, the cultural tradition was not only the essence of nation formation but the firmest obstacle before social transition and reformation as well. Therefore, any reformist should keep in mind that reforms should be done in accordance with the national entity, which implies that any Western adoption should be translated into the national philosophy of the Turkish nation.

Baltacıoğlu continued writing on scattered topics such as religion, education, social institutions and aesthetics. He published more than 20 books on those topics. He was a talented artist, too. He made Islamic calligraphy for years. He even invented two original scripts in calligraphy. Besides, he studied the modern style of writing and published books on that, too.