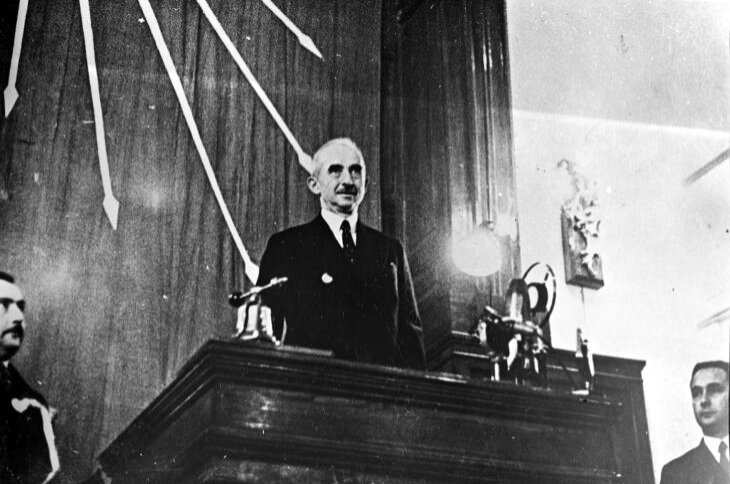 The second president of the republic, Ismet Inönü, was a statesman who served as minister of foreign affairs, prime minister and opposition leader in Turkish political history outside his military career

Mustafa Ismet Inönü, known more commonly as Ismet Pasha in Turkey, was the second president of the Turkish republic and has been a controversial figure in Turkish politics for signing some very cruel actions that have remained at the core of the country's political decision-making for about five decades. From the early 1920s –when Turkey was battling in the War of Independence against Greece and its Western supporters – until he died in the early 1970s, Inönü touched the destiny of a nation with a Machiavellian hand. Though his name and reputation have been overshadowed by Mustafa Kemal Atatürk’s charisma, Inönü had a greater impact than his charismatic friend in the formation of Turkish politics. He was a loyal tool for Atatürk’s leadership from the early 1920s when he arrived in Ankara to join the national struggle led by Atatürk, until the “Supreme Leader’s” death in 1938. However, he utilized power as “the second man” of the young republic before he collected all the power in his own hands after Atatürk’s death and never showed a glimpse of sharing it with anyone else. He had a great impact on politics even during the years when he was the leader of the opposition Republican People's Party (CHP). Interestingly, the man who overthrew him was Bülent Ecevit, his protege in the CHP.

Inönü was born in 1884 in western Izmir province as the son of Hacı Reşid Bey, a public servant at the Izmir courthouse at that time, and Cevriye Hanım. Hacı Reşid’s family was originally from Bitlis province and resided in Malatya province while Cevriye’s family originated from Deliorman (Ludogorie), now in northeastern Bulgaria.

After the Young Turk revolution and ending of the Abdülhamid II era, Inönü was commissioned in Yemen as a commander of troops assigned to suppress the rebellion. He fought Yemeni rebels for three years before he was transferred to Istanbul to join the Balkan Wars. He acted as the military counsel for leading CUP figure Cemal Pasha at peace negotiations with the warring Balkan states.

Inönü fought in various frontiers during World War I. First, he was chief of staff at the Gallipoli frontier, which helped him climb up the ranks to colonel. After the Gallipoli War was won, Inönü was commissioned in Diyarbakır as the Second Army was deployed to the eastern frontier. Meanwhile, he married Mevhibe Hanım.

Inönü won some ranks and many badges and medals for his work during World War I. He was the undersecretary of the Minister of War at the end of the war; however, he could work only for a month before the Cabinet resigned in November 1918.

Farming or warring: A matter of choice

Kazım Karabekir, the legendary commander of the eastern frontier of the War of Independence and a rival of Inönü after the Republic was established, claims in his memoirs that Inönü offered him to buy a farm and earn their living that way after World War I was lost to European forces. According to Karabekir’s recalling, Inönü was very pessimistic and saw no feasibility in the War of Independence. Yet, he moved to Ankara in January 1920 upon Mustafa Kemal’s invitation, and thus joined the War of Independence as a member of Parliament.

Also, Inönü was a soldier, therefore, Atatürk made him accept the job of chief of general staff to constitute a real and proper army out of scattered armed groups in the western frontier. Later he became the commander of the northern section of the western frontier forces. He stopped the Greek forces in Eskişehir, and then threw them back, which brought him the rank of brigadier. His rank was raised to lieutenant general after the Battle of Sakarya in 1921. Thus, “Ismet Bey” became “Ismet Pasha.”

Inönü was a calm negotiator and a loyal second man to Mustafa Kemal, so he was commissioned for the armistice negotiations in Mudanya and peace negotiations in Switzerland's Lausanne with the Western states including Britain and France. Though his relationship with Mustafa Kemal, the leader of the Republic, was quite coherent, he always had arguments with the under-leaders or the other “second men” such as Rauf Orbay and Fethi Okyar, both the closest friends and collaborators of Atatürk. He was not liked among the members of the Parliament either. So, Atatürk didn’t think to choose him as the prime minister of the republic that he was ready to announce on Oct. 29, 1923. However, Inönü was assigned as the prime minister and the minister of foreign affairs on Oct. 30, 1929, as Atatürk was elected president by the Turkish National Assembly, Inönü was also assigned as the chairman of the Halk Fırkası (People’s Party), which would become the People’s Republican Party (CHP).

Indeed, Inönü was useful as a right-hand man to Atatürk. He was useful especially in the annulment of the sultanate in 1922 and the caliphate in 1924. Inönü was a real second man, who did everything to help Atatürk. He collected the presents of that loyalty and remained as a part of the power until Atatürk’s death while people in political society couldn’t think of another person to elect as the president after the “Eternal Chief’s” death. During his presidency, he had the official title of “national chief.”

Inönü ruled Turkey with an iron fist as prime minister and then as president from the early 1920s until the Democrat Party’s great democratic election victory in 1950. Inönü’s signature was under every strict action decision including the annulment of the sultanate and caliphate, the heavy military actions against the Sheikh Said rebellion, the controversial capital punishment decisions and executions of the Independence Courts, coercive applications of secularism, the closure of political parties other than the ruling CHP, etc.

Inönü ruled Turkey for 13 years in the name of Atatürk, the president. Yet, the duo had an argument in 1937, one year before Atatürk’s death, and Inönü resigned as the prime minister. He was dismissed from his duty as the chairman of the CHP, too. However, Inönü was elected as president after Atatürk’s death on Nov. 10, 1938, and ruled Turkey as the president until 1950, when people’s vote elected Celal Bayar as president and Adnan Menderes as prime minister.

Inönü was the true Machiavellian politician of Turkey. After 1950, he didn’t retire as many could expect from him. On the contrary, he continued a severe opposition campaign against Menderes, who beat him in every democratic election. Eventually, when the military coup of May 27, 1960, overthrew Menderes, the junta had Inönü’s full support and cooperation. Many people believe that Inönü was responsible enough for the execution of Menderes, the first-ever democratically elected Turkish prime minister. As a former combatting soldier and revolutionary, he never exhibited any remorse for what they did to him. The only thing Inönü was interested in was the trajectory of Turkish politics, which he drew. Every possible action, ethical or not, should be taken to keep this trajectory unmodified.

On the other hand, Inönü owed his reputation to two significant occasions. First, he was among the commanders of the War of Independence, who defeated the enemy and freed the country. Second, he saved Turkey from entering World War II, a decision that has been praised even by Inönü’s adversaries. However, he is remembered for minimizing Turkey as an economic and military power. Inönü’s Turkey was a small, peaceful, Western-oriented country in vast poverty and political violence. This particularly explains the style of the right-wing parties striving to make Turkey great again.

Inönü’s CHP was defeated by Süleyman Demirel’s Justice Party (AP) in 1965 general elections, when he decided to announce the CHP as a leftist party, which has been argued in political and academic circles so far. Inönü was also defeated as party chairman by his own protege Bülent Ecevit in a party congress in 1972, when he decided to resign from his duties as CHP chairman and as a member of Parliament.

Inönü died on Dec. 25, 1973. His grave is at Anıtkabir, the mausoleum of Atatürk, Ankara. Inönü had three children with Mevhibe Hanım, while Erdal Inönü, one of those three, entered politics in the 1980s, chaired the Social Democracy Party (SODEP) / Social Democratic Populist Party (SHP) (the replacements of his father’s CHP after its closure after the Sept. 12, 1980, military coup) and was the minister of foreign affairs, deputy prime minister and prime minister in the SHP- True Path Party (DYP) coalition from 1991 to 1995.