Midhat Pasha: A revolutionary or a murderer? 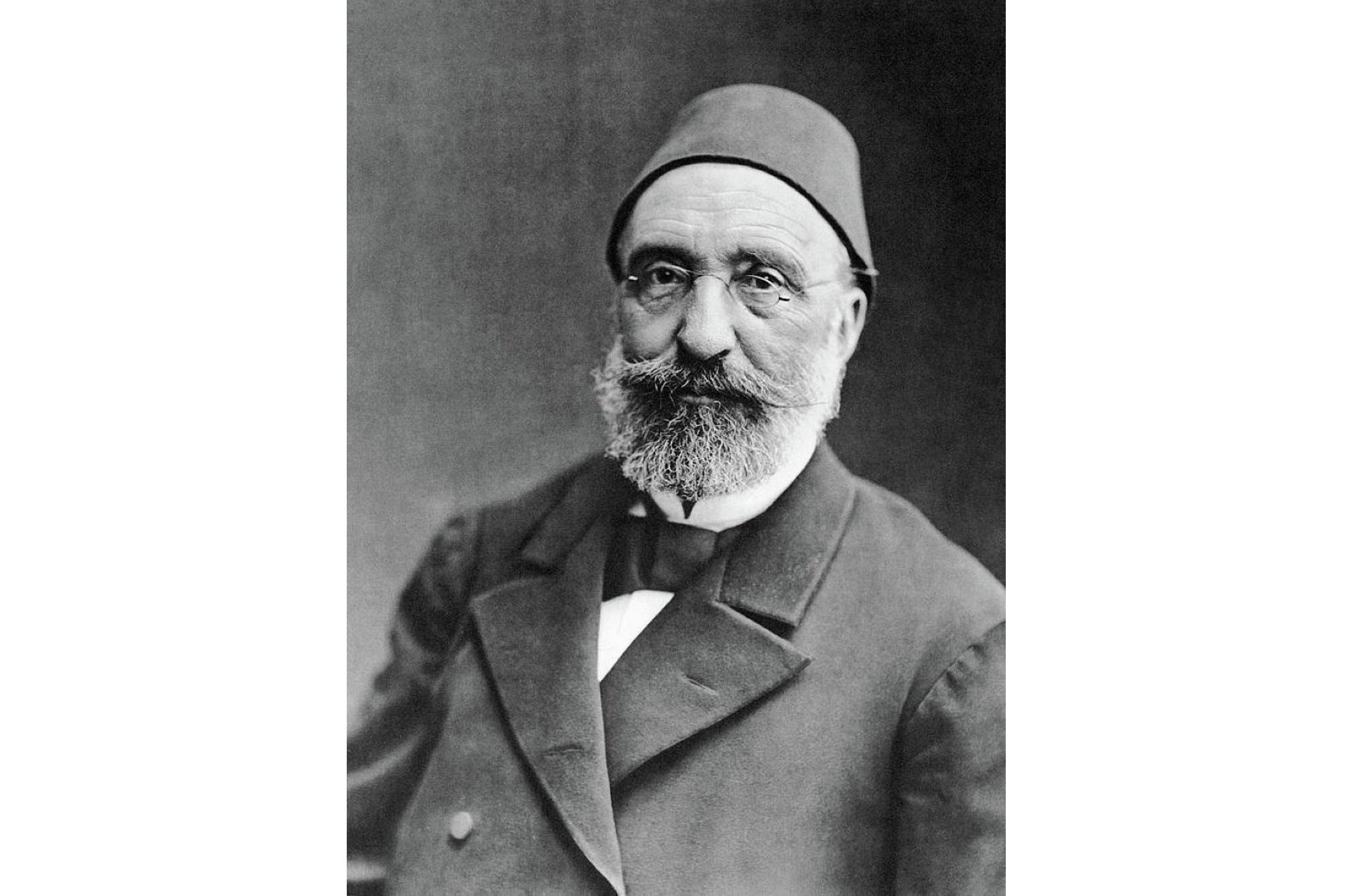 Midhat Pasha played a major role in the development of the eyalets to which he was appointed as a governor.
by Hakan Arslanbenzer
Nov 06, 2020 11:50 am

Midhat Pasha, a leading statesperson who advocated for reform in the Ottoman Empire, was a controversial figure whose liberal attitude and actions sparked debate

Constitutionalism arrived in Turkey from the West, from France to be precise. Although the constitutional monarchy of England and Scotland (establishing the U.K.) dates back to the late 17th century, the Ottomans did not pay attention to the British until the mid-19th century. The 1789 French Revolution had a greater impact on the Ottoman political system as the country was a good, old ally of the state. Reformist approaches emerged as early as the 17th century within Ottoman bureaucracy but had little or no connection with the rise of Western constitutionalism whether in the form of constitutional monarchy, as enacted in Britain in the late 17th century, or republicanism, which was the result of the 1789 Revolution in France. Ottoman wise men before the Tanzimat era offered a return to the classical Ottoman laws that governed their ancestors during the rule of Suleiman I, also known as Suleiman the Magnificent. The law and order of the time did not have a written constitution intended to limit the authority of the sultan.

These implications came two centuries later when a group of young revolutionaries, namely the Young Ottomans, established a secret organization called “Ittifak-ı Hamiyyet” in order to meet and discuss the future of the Ottoman state. The group was against Ali Pasha and Fuad Pasha, who were powerful grand viziers under Sultan Abdülaziz at the time. It was characteristically Ottoman that the young revolutionaries were themselves public servants who were practically part of the political system they were criticizing. What differentiated them from their colleagues in public office was that they had worked at the Translation Office, a branch of the Government of the Ottoman Empire that translated documents from one language to another, at various times. This experience exposed them to Western revolutionary ideas, particularly Italian liberal movements including the Giovine Italia (Young Italy). But who would be their Garibaldi?

The Young Ottomans had a leader of sorts, Mustafa Fazıl Pasha, who organized and sponsored the group, even suggesting constitutional reform to the sultan. He declared himself as a representative of the “Young Turkish party,” according to the European press, before leaving the revolutionary movement at some point to become a minister and member of the Meclis-i Ayan, the senate of the Ottoman Empire. He died before Sultan Abdülaziz was overthrown in favor of his brother Murad V, a mentally ill man who would be replaced with Abdülhamid II by the real leader of the Young Ottoman revolution, Midhat Pasha, a successful Ottoman bureaucrat. Midhat Pasha came from a more humble background than Mustafa Fazıl Pasha, a wealthy and famous heir of the Ottoman-Egyptian dynasty of Muhammad Ali Pasha.

Midhat Pasha was born “Ahmet Şefik” in Oct. 1822 in Istanbul to Ruscuklu Hacı Hafız Mehmet Eşref Efendi, an ordinary public servant. Ahmet Şefik was homeschooled and had memorized the Holy Quran by age 10. He visited the Eyalet of Vidin (now in Bulgaria) with his father for a year before he was admitted to public office at age 12, a common practice for Ottoman public offices until the end of the 19th century. Midhat Pasha could be considered a graduate of the Ottoman state itself.

Ahmet Şefik adopted his penname, “Midhat,” in the Office of Communications for the Imperial Council. He learned the “diwani” script, which was a very difficult style of writing, in a very short time as well as learning Arabic and Persian from private tutors. He also received private lessons on linguistics, logic, Islamic law and philosophy.

Midhat’s first eyalet (primary administrative division of the Ottoman Empire) post was in Damascus but would later work at other eyalets in places such as Konya and Kastamonu. Eyalet rotation was at the core of the Ottoman imperial bureaucratic tradition, which purported that its public servants should know everything about the Ottoman territories and their diverse characteristics. Midhat would soak up the experiences garnered from his eyalet posts and handle a customs issue between Damascus and Aleppo, helping him to quickly rise through the ranks. He was only 21 years old when he was sent to Damascus as a special investigator looking into the finances of the army headquarters in Arabia.

Midhat Pasha proved himself as a bureaucrat in a considerably short time. He worked in every region of the empire. However, he had some troubles, too, as any brilliant Ottoman bureaucrat would have. Once, as he was handling aid work after the Bursa earthquake in 1855, a senior bureaucrat sued him with the accusation of misconduct in public office, though he was acquitted after a trial before the Meclis-i Vala, Supreme Council for Judiciary.

After Mustafa Reşit Pasha’s death, he went under the patronage of grand viziers Ali and Fuat Pashas, whom the Young Ottoman revolution would target after 1865. Midhat Pasha visited European capitals including Paris, London, Brussels and Vienna, and he improved his French. This was just before he was appointed as the extraordinary governor of Nis Eyalet (now in Serbia), which was a very difficult territory at that time. He managed to provide security in the eyalet and had roads and bridges constructed. Thanks to his success in Nis, the Sanjak of Prizren was also given under his control. In 1864, Midhat Pasha was appointed as the governor of the newly established Vilayet of Danube, which included the previous Nis, Silistra and Vidin eyalets. He founded the first provincial official newspaper called “Tuna.” He also founded the grounds of the Ziraat Bank, the first Turkish bank. His accomplishments convinced the central government to apply the new provincial system to all Ottoman territories.

When Midhat Pasha returned to Istanbul in 1868, he was at a fascinating point in his career. He was assigned as the head of Şura-yı Devlet, the state council. This title was the highest advisory position, second to only the grand vizier and the sultan himself. Ali Pasha personally assisted Midhat in ascending the ranks, but the two disagreed early on and Ali sent Midhat back to the provinces – a common practice among Ottoman administrators in getting rid of troublemakers.

Midhat Pasha governed the Baghdad province and commanded the Sixth Army for three years before he returned to Istanbul. Ali Pasha was now dead and had been replaced with Mahmud Nedim Pasha, which was not good news for Midhat. As a result, Midhat resigned from office in 1872 and began to lead the opposition party, particularly the Young Ottomans and their allies.

In a very short period of time, Midhat Pasha became the enemy of the sultan, as it was known he was preparing a constitution aimed at limiting the sultan's authority and reestablishing the Ottoman administration. He was exiled in 1873 and fired from all of his duties in 1874. When he returned to Istanbul, he stayed at home and tended to his garden. Afterward Mahmud Nedim Pasha assigned Midhat as minister of justice, a post he resigned in order to protest the grand vizier in 1875. This lit the fire of the Young Ottoman revolution, which left Sultan Abdülaziz dead and throned the mentally ill Murad V.

It’s still a matter of controversy under what conditions Sultan Abdülaziz died. Was he murdered by Midhat Pasha and his collaborators as believed by Sultan Abdülhamid II, who replaced Murad V and was the nephew of both? Or did he simply commit suicide following a mental breakdown due to the political turmoil caused by the Young Ottoman revolutionary opposition? What we can say with certainty, based on concrete facts, is that the opposition dethroned Abdülaziz and instated his sick brother Murad V, which would have had a heavy psychological effect on him. Sultan Abdülhamid II was prosecuted following the suspicious death of his uncle and many people were tried, including Midhat Pasha. Courtroom photographs taken by photographer Vasilaki Kargopulo provide concrete evidence that the revolutionaries were disrespectful toward the ex-sultan. Many eyewitnesses also claimed to see the sultan being murdered.

Whatever the situation was, Abdülhamid II never trusted Midhat Pasha or the other revolutionaries and exiled them one by one. Although he did deliver on his promise of opening the first parliament and declaring a constitutional administration after he was throned under Midhat's sponsorship, the sultan shut parliament and annulled the constitution once Russia declared war against the Ottoman state and would rule the country until the Second Constitutional era or the 1908 revolution.

Midhat Pasha benefited from being at the top of the state for a short period following Abdülhamid II's coronation before Abdülhamid opted to use the Russian war as an accelerator for his plans against revolutionaries, who in his opinion killed his uncle and had enough power to do the same to him. Midhat was exiled to Europe and assigned as governor of the viyalets of Syria and then Aydın before being fired from the governor's office. Midhat was arrested, charged with conspiracy and murder, sentenced to death before being pardoned by the sultan and granted a life sentence, exiled and secretly executed in Taif, Arabia on the night of May 7, 1884. There have been countless legends surrounding his death, all of which include Abdülhamid’s vengeance.

Although Midhat Pasha was a convicted conspirator and murderer, historians believe he has much more to offer. In an obvious exaggeration, the Kemalist regime praised Midhat as a hero of liberty and progressiveness.

Midhat Pasha’s body was transferred to Istanbul decades later during the Democrat Party (DP) rule, and buried at the Monument of Liberty, where other significant Ottoman pashas who defended the Ottoman parliament against reactionary monarchist forces also lie. Many schools and streets were named after Midhat Pasha in the Republican era.