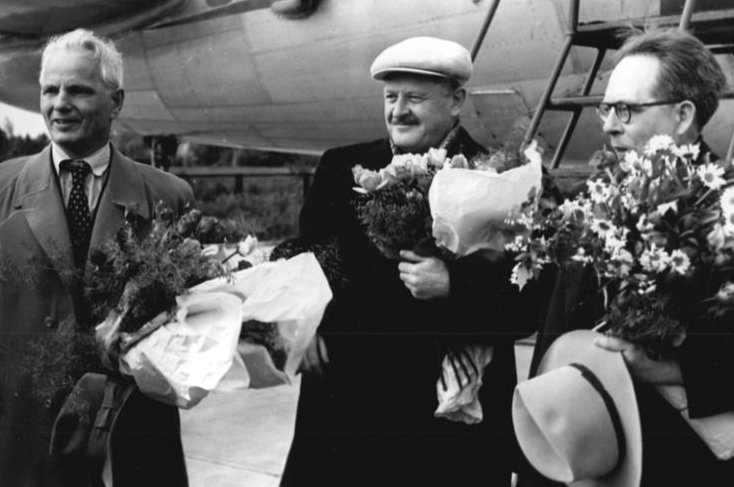 Hailed by many as the writer of hope, Turkish poet Nazım Hikmet, with his profound optimism, could be just what the world needs now in the face of the coronavirus pandemic.

"We will see beautiful days kids / sunny days / We will sail our boats to the blue seas kids / to the bright blue seas,” wrote Hikmet in the 1930s – with the Great Depression hanging over much of the globe – in a poem titled "Optimism."

Wednesday marks the 57th anniversary of the passing of the legendary Turkish poet.

At a glance, his biography may make his optimism even more significant: His books banned, he spent most of his life behind bars or in exile but continued to write.

In the early years of his career, Hikmet was loved, and there were even recordings of his poems on vinyl.

But "then Turkey hated him, he was declared a traitor,” Vassaf is quoted as saying by Haluk Oral in his 2019 book "The Journey of Nazım Hikmet."

Hikmet was born in 1902 into an elite family in Thessaloniki (Thessalonica), an Ottoman Empire territory in present-day Greece. He grew up in Anatolia, the Turkish heartland.

After studying economics and political science in Moscow, he came home a Marxist in 1924, a year after the new Turkish republic was founded following the collapse of the Ottoman Empire.

He spent most of his adult life in jail. During his time in prison, international intellectuals such as artist Pablo Picasso and philosopher Jean-Paul Sartre urged his release.

In 1951, Hikmet left Turkey forever to live in the Soviet Union, from which he traveled to Eastern Europe, Cuba and other places.

For this reason, when Turks travel across the world in Russia or Cuba or Eastern Europe, it is common to see Hikmet’s footprints in the cities where he lived, either in a museum, as in Chile, or in a cafe he used to frequent in Prague.

"Those few who knew his value were compelled to hide their love. Then he was rediscovered. This time we idolized him,” Vassaf was quoted as saying.

According to Vassaf, Turks are lucky to be able to read Hikmet in their native tongue, while those in the rest of the world are not as fortunate.

"If his mother language had been Spanish, French or English, Nazım Hikmet would be embraced (universally) like Shakespeare,” Vassaf said, adding: "Every condition of humanity is represented in his poetry.”

Vassaf also highlighted the way Hikmet uses the Turkish language in his poetry, with notable clarity, unlike many other writers from that time, which many Turks need to keep a dictionary on hand to be able to read.

He also detailed some of the international sources Hikmet drew upon to make him a true world poet:

"In his poems, he tells about Abyssinia (Ethiopia) after the Italian occupation."

"He goes to the Louvre, writes about China by looking at the Mona Lisa, and about Indian history with Benerci (Banerjee),” Vassaf said, referring to some of Hikmet’s best-known poems.

"He goes to Cuba and writes about the power of the resistance to American imperialism,” Vassaf wrote.

He writes about world history in his poems, Vassaf added.

UNESCO declared 2002 the Year of Nazım Hikmet to mark the 100th anniversary of his birthday.

After dying of a heart attack in 1963 in Moscow, Hikmet remains buried there, although there have been attempts to repatriate his remains to Turkey.