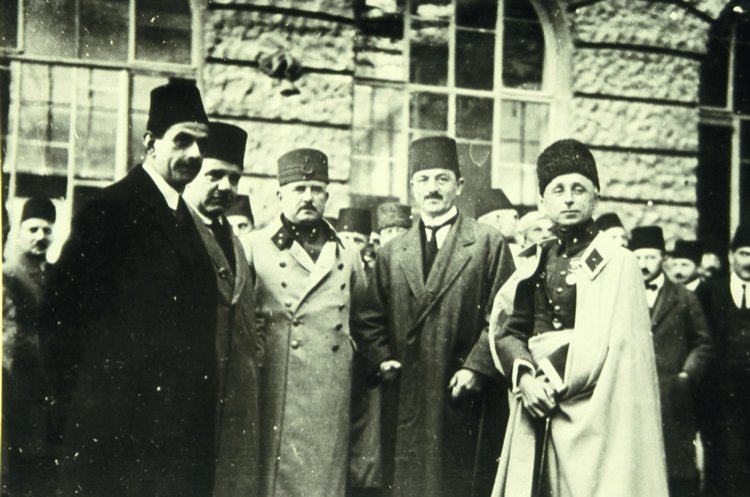 The Ottoman-born Turkish naval officer took his chances in politics as a statesman after leaving behind his military career, which led to dramatic ups and downs in his life

Turkey has never lacked ex-general politicians. There are various reasons for ex-military staff to enter politics. One is that the most prestigious state institution in Turkey is the military. Another is that soldiers are taught that they are the saviors of the country and the people and should sacrifice themselves when required. Perhaps, the most significant reason for ex-military members' involvement in statecraft is that Mustafa Kemal Atatürk, the founder of the republic, was an ex-general himself who resigned from the army to lead the national struggle for independence.

Atatürk, however, was not alone as an ex-soldier making the jump into politics either before or after the republic's founding. Many of his close friends and colleagues during the national struggle were previous war heroes of the Ottoman army. Due to the empire's defeat at the end of World War I, many officers resigned or retired. Yet, they could not accept staying outside the political arena. As a result, many moved to Anatolia and acted as lawmakers or commanders just like their new leader, Atatürk.

Among the most significant ex-military politicians, Ismet Inönü, Fethi Okyar and Hüseyin Rauf Orbay were especially outstanding because all three were old friends of Atatürk, whom they met either at military school or during the Turkish National Movement, which was a revolutionary group that helped the Committee of Union and Progress, a political organization and later a party, to overthrow Sultan Abdülhamid II. Inönü and Okyar kept their place in Atatürk's entourage while Orbay became their political opponent and lived the bitter consequences of his decision.

Orbay was born in 1881 in Istanbul to Mehmed Muzaffer Pasha, a frigate captain in the navy, a vice-admiral, a member of Ayan Meclisi (the Senate of the Ottoman Empire) and Tripoli governor of Abkhazian origin. Muzaffer escaped from Sokhumi, Abkhazia to Istanbul together with his twin sister and enrolled at a military school, graduating as an officer. Orbay once said: “My father left Caucasia to escape the Russian Empire’s pressures and to get freedom in Istanbul. He owed his free existence to the Ottomans. And I carry his blood.”

Orbay graduated from the Navy School in 1899 and began to work for the Ottoman navy as an officer. He obtained great fame after he made skilled maneuvers with the Hamidiye cruiser that was under his command during the Balkan Wars. Thanks to his reputation, he became the chief of naval staff during World War I.

At the end of the war, Orbay resigned from the navy and decided to take his chances in politics. He became the minister of the marine in Ahmed Izzet Pasha's Cabinet. Unfortunately, he was among the ministers who signed the Armistice of Mudros, the Ottoman's formal surrender to the Allies, and which was effectively a captivity agreement for Turkey. After seeing the misconduct of the British occupation force, however, Orbay made contact with Fethi Okyar and Atatürk to find out what they could do. After a while, he resigned from the ministry and navy to join Atatürk's national struggle in Ankara.

Orbay was welcomed in Ankara as he was a friend of Atatürk and a prominent figure in politics. He participated in Turkish Nation Movement congresses held in Erzurum and Sivas before the Grand National Assembly was reopened in Ankara. Orbay stayed in Istanbul even though he was aware that British occupation forces were imprisoning people who helped Turkey's national struggle. Eventually, he was arrested and exiled to Malta on March 16, 1920.

In 1921, he was released and moved to Ankara to join the Grand National Assembly as the Minister of Public Works. He acted as prime minister in 1922 and 1923. Yet, he quarreled with Atatürk and Ismet Pasha over the Treaty of Lausanne negotiations, which among other things outlined the Republic of Turkey's borders, and joined the opposition. He defeated Ismet Pasha and was elected the chairman of the Grand National Assembly in 1923, days before the announcement of the Turkish state. Some sources, including Atatürk, tell us that Orbay opposed the idea of creating a republic and defended the continuation of the sultanate and caliphate. However, he supported Atatürk’s decision after the Oct. 29 announcement.

Orbay later became involved with the so-called “Second Group” in the Grand National Assembly, which became the political party Terakkiperver Cumhuriyet Fırkası (Progressive Republican Party) in 1924, upon Atatürk’s decision to annul the sultanate and caliphate and found a republic. Orbay was among the founders of the new party and elected as its second chairman.

In 1926, Orbay was sentenced to 10 years of exile in absentia for conspiracy to assassinate Atatürk, which from the beginning was a hoax. He was pardoned in 1933 during the celebrations of the republic’s decennial but chose to stay in London. After Atatürk’s death, Orbay returned on the condition that the sentence against him be totally annulled. He became a member of Parliament for another term in 1939 and helped the government to keep Turkey out of World War II.

Orbay was commissioned as the Turkish ambassador to London in 1942, from which he resigned two years later. He lost his mid-term elections held in 1949 as an independent candidate. After that, he lived in silence, wrote his memoirs and died on July 16, 1964, in Istanbul. His autobiography was published in 1993 in two volumes, “Siyasi Hatıralarım” (“Political Memoirs") and “Cehennem Değirmeni” (“The Milli in Hell”).