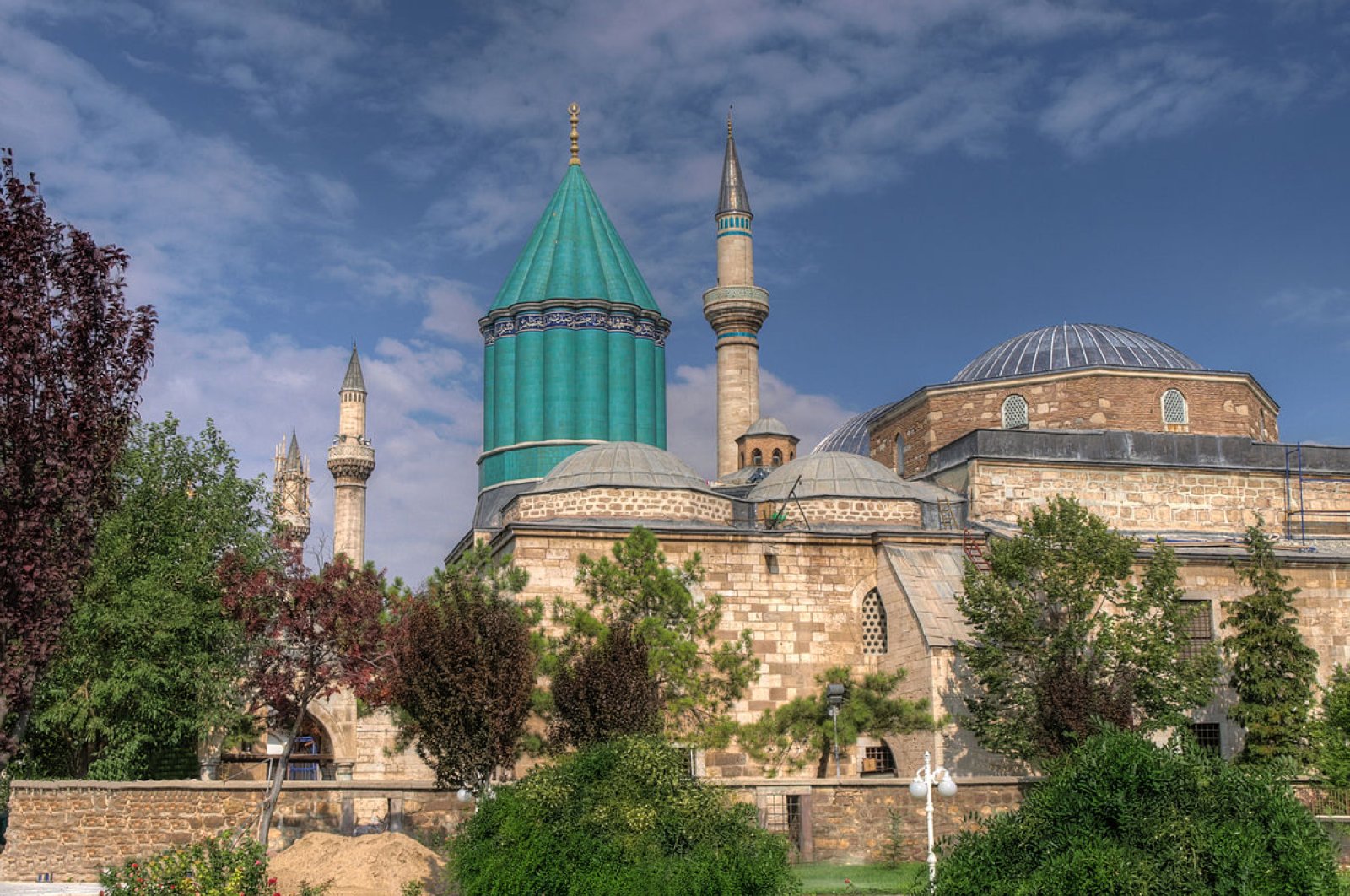 The shrine of Rumi in central Konya province comes to the forefront with its distinctive green-tiled cylindrical dome.
by Hakan Arslanbenzer Jun 05, 2020 1:00 pm
Edited By Irem Yaşar

The evolution of society following the conquest and Turkification of Anatolia has been much debated by historians over the last century. Academics in the field, both from Turkey and abroad, have tried to paint an image of the conquerors of Anatolia in line with their historical perspective, sociological evaluations of Anatolian civilization and typologies of Turks in history. For instance, according to Paul Wittek, an Austrian orientalist, Turks conquered Anatolia and other places depending on their ideology of "gaza," or holy war, which neglects the social transformation of Anatolia. Not all of the Turks moving to Anatolia were ghazis, which brings us to the thesis of Mehmet Fuat Köprülü suggesting that Turks mostly managed to conquer Anatolia owing to their social superiority as an ascending society in every regard. Köprülü portrays the Ottoman Turks as a full set of societal establishments, the initial Turkish social order having been based on a stratum of producers, warriors, administrators, scholars and mystics.

The latter of the social strata to proliferate in Anatolia after the Turkish conquests, the mystics – or Sufis, to be precise – were those who spread Islamic beliefs and thoughts most widely, especially to the illiterate populace. Ordinary Islamic scholars could only reach out to the hearts and minds of the literate, while Sufis could make connections with everyone, from the elite to the ignorant, relying on their verbal understanding of Islam and their imagery in communicating it. This sometimes led them to run into problems, even causing political unrest between madrasah scholars and the Sufis.

However, the distinction between Sufism and scholarly Islamic interpretation was not always an ontological clash. There had been many Sufis who drew from the madrasah tradition, including Al-Qushayri and Al-Ghazali, both great Sunni scholars of the Seljuk Empire and Sufi authors in their own time. As for Anatolia, besides “heterodox” Sufi orders – such as the rather more extreme Qalandariyya – the Sunni Sufi orders created a bridge between the heart and the mind, between Sunni orthodoxy and mysticism. The Mevlevi order is perhaps the best example of such a bridging. Based on both the Sunnism and Sufism of Mevlana Jalaluddin Rumi, the Mevlevis have for centuries continued their peaceful rituals, which never implied a deviation from the Sunni tradition, with Rumi becoming an icon of peace, love and faith all over the world.

Jalaladdin Muhammed Rumi was born in 1207 in the city of Balkh in Khorasan, now a province of Afghanistan. He is often referred to as Mevlana, which is his epithet and title, though some texts refer to him as Al-Balkhi, after his birthplace. The name Rumi, meanwhile, is most often used given he lived his entire life in Anatolia, which was historically known as Rum (Rome) – the heartland of the Byzantine Empire. Mevlana means “our beloved friend,” which shows Rumi’s authority and fame has not faded over centuries – not least among the Turks. He is also called “Molla Hünkar” (Mullah Sultan) and “Molla-yı Rum” (the Mullah of Anatolia).

Rumi's ethnic origins have been much debated due to the fact that he referred to himself as a Turk in one of his rubaiyat (a poem consisting of four lines). Whether or not he was of Turkish origin, Rumi undisputedly lived in what is now Turkey, though he wrote in Persian. In any event, during this period ethnic origin was not as significant as it is in our current era.

Rumi’s father Muhammad Bahaeddin Walad was a notable Sufi and scholar in Balkh, which was under Khwarazmi rule, yet had to flee the country because of a political dispute with Alaaddin Muhammad, the sultan. Rumi was only 5 years old when his father took his family from Balkh to Baghdad, and then to Hejaz for the hajj, the sacred Islamic pilgrimage. After some years in cities such as Damascus, Malatya, Erzincan and Larende (today’s Karaman province), Walad settled in Konya upon the invitation of Alaaddin Keykubat, the Seljuk sultan.

Rumi married Gowhar Khatun of Larende, having two sons named Sultan Walad and Alaaddin, reflecting his father’s and the sultan’s names. After Gowhar's death, he married Kara Khatun and had a son and a daughter from her, Amir Alim Chalabi and Malakeh Khatun.

Rumi’s mother Mumina Khatun died in Larende, while his father Bahaeddin Walad died in Konya after teaching for two years at the Konya Altınapa madrasah. Rumi was 24 years old at his father’s death.

Rumi replaced his father at the madrasah as a scholar of the Hanafi school. On the other hand, he was a disciple of Seyyid Burhaneddin, who was a disciple of Bahaeddin Walad. Jalaluddin served Burhaneddin for nine years before he received his “ijazah," or permission to scatter the teaching. Burhaneddin encouraged Rumi to visit the great madrasahs of Damascus and Aleppo in order to enhance his knowledge as a Sunni scholar. He gained a better knowledge of Arabic and poetry, lexicon, law, hermeneutics and hadith while in Syria. He also utilized the opportunity to make conversations with such great Sufis in Damascus as Ibn Arabi, Awhaduddin Kirmani and Sadreddin al-Qunawi.

Having received his “ijazah” from both the madrasah of Damascus and the Sufi order of Anatolia, Jalaladdin began to act and write on his own. Especially after his master’s death, he found a freer space prepared for him by his elders and peers in which he could better write, teach and think.

Rumi met Shams of Tabriz after Burhaneddin’s death, an incident that influenced him so much that he changed to an ascetic Sufi after so many years of learning and teaching at the madrasah. There are various versions of the story of their encounter, the main idea of which implies Rumi’s transformation from a scholar with a literary knowledge about mysticism to a proper ascetic mystic.

However, Rumi never left the path of Sharia. In his poems, he holds the Sharia as the basis of Sufism. One of his famous allegories suggests that knowledge has four gates, the first of which is Sharia and the last of which relates to marifa (Sufism). His teachings offer Sufism as a psychological improvement in understanding Islam. Since Rumi lived during a socially and politically chaotic environment brought about by the Mongol invasion, he emphasized peace and fraternity instead of fighting back, which some scholars and intellectuals have criticized, claiming that he should have supported the resistance of the Muslim Turks against the pagan Mongols.

Rumi died in 1273 and his tomb is in Konya, which is a place of visit for Sufis. His heritage includes his powerful poems and the Mevlevi order, a world-renowned mystical and aesthetic movement.