Sabuncuoğlu Şerefeddin: A progressive physician and pharmacologist of 15th century 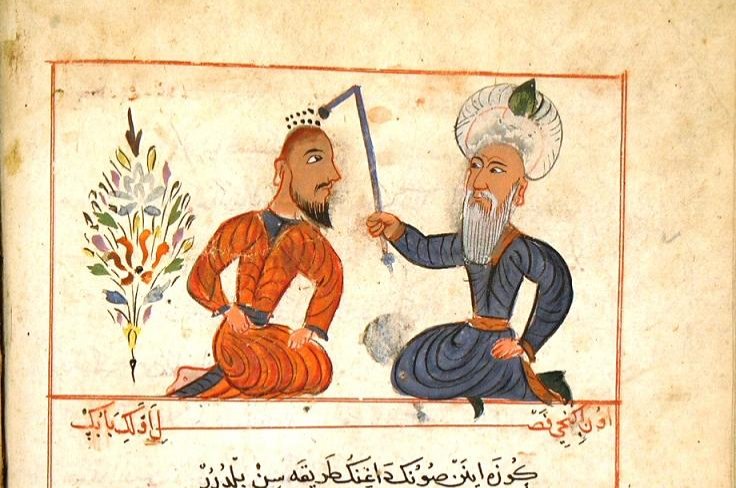 Medieval Ottoman physician Sabuncuoğlu Şerefeddin has guided the medicine world with his books of pharmacology and treatment methods, which he prepared from his own experiments

As the death toll from the coronavirus outbreak rises, more governments across the world have decided to lock down their countries to curb infections and prevent health care systems from becoming overwhelmed. National health systems equipped with ultramodern medical devices and armies of health care personnel who have been taught the highest knowledge of medicine and pharmacology are helpless against the invisible enemy, the fatal effects of which were first seen in China. For the Western world, now the epicenter of the contagion, the virus has presented a severe test for health systems and national solidarity.

The coronavirus is not the first contagion humanity has faced, however, and it seems it will not to be the last. Outbreaks of fatal viruses and diseases were part of daily life in medieval times. A handful of types of plague, smallpox, measles and the flu are believed to have killed hundreds of millions across the centuries.

On the other hand, diseases and infections also stimulated the development of medicine. As more people were infected and died, the literate members of society became more involved in the expansion of medical knowledge. Thus, the Middle Ages saw the birth of a process which would lead to the modern medicine we enjoy today.

However, the Islamic World did not undergo a renaissance in terms of many sciences, including medicine. After studying a wealth of old theories and contemporary practices in medicine and pharmacology, early Muslims combined and improved the medical traditions of the ancient Hellenistic and Persian worlds together with Syrian practices. Countless physicians were taught at madrasahs; many bimarhanes (literally: "sick houses," or hospitals) were established and new knowledge, techniques and drugs improved upon.

After the Turks converted to Islam, they came to learn every faculty of the Islamic civilization, including the science of medicine. Islamic history is dotted with many physicians of Turkish origin. However, the Seljuks in Anatolia initiated the study of medical literature in Turkish. By the time the Ottomans took over Anatolia, scientific medicine had been established as a widespread practice across the land.

One of Anatolia's most famous physicians was a certain Sabuncuoğlu Şerefeddin, who lived and practiced medicine in the Black Sea town of Amasya.

Şerefeddin was born sometime between 1485 and 1487 in Amasya, which was then occupied by the Mongols. When Şerefeddin was 8 years old, the Ottomans annexed Amasya to their land. His grandfather Mevlana el-Hac İlyas Çelebi was the chief-physician of Ottoman Sultan Mehmed I. Şerefeddin was taught medicine at Amasya Hospital by Burhaneddin Ahmed en-Nahcuvani, who was another prominent physician of the time.

Şerefeddin worked as a physician in Amasya for 14 years before moving to Kastamonu to work for the Candaroğlu Beylik (Principality), which was under the rule of İsfandiyar Bey. After a while, the physician headed to Istanbul in order to submit one of his medical works, “Cerrahiyye-i Haniyye” ("Imperial Surgery") to Mehmed II, aka Mehmed the Conqueror. Şerefeddin later returned to Amasya where he died sometime after 1568.

Three major works by Şerefeddin have survived to this day. The first is the Turkish translation of the “Akrabazin” (Pharmacology) section of the medical encyclopedia penned by Zayn al-Din Gorgani upon the request of Bayezid II, who was governor of Amasya at the time. Şerefeddin added two more chapters to the 31 included in the book. The work includes recipes for the preparation of drugs of varying complexity.

The second work by Şabuncuoğlu Şerefeddin is the “Cerrahiyye-i Haniyye,” which he submitted to Mehmed the Conqueror himself, in Istanbul. This is an illustrated textbook for medical students. The book includes miniatures showing surgical operations. Cerrahiyye-i Haniyye is also written in the early Turkish language, rather than Persian or Arabic, which were highly regarded for literature at the time, making the work a national treasure for Turkey. Şerefeddin explained why he wrote the book in Turkish, saying, “Many Greek physicians speak Turkish, too, and the small number of physicians who are literate generally can only read in Turkish. I wrote this book in Turkish in order to help them acquire the essence of every topic and to be able to manage the exact operation required.”

Three copies of the Cerrahiyye-i Haniyye exist, two of which are at the Millet Library in Istanbul's Fatih district, while the remaining one can be found at the Bibliotheque Nationale in Paris.

Şerefeddin’s third work to survive the ages is the “Mücerrebname” ("On Attemption"), a pharmacologic guide that offers special recipes for specific diseases. The interesting aspect of the Mücerrebname is that the book mentions Şerefeddin’s own experiments with drugs applied to himself, other human beings and even animals. Şerefeddin develops a sort of case presentation in the book to show his colleagues, who asked him to write a book on drugs and their effects.

Ottoman physicians followed his books as a guide for centuries. Sabuncuoğlu Şerefeddin became a prominent name in the history of medicine in Anatolia. The university hospital in Amasya carries his name today, while the neighborhood where he was born was later named after him.