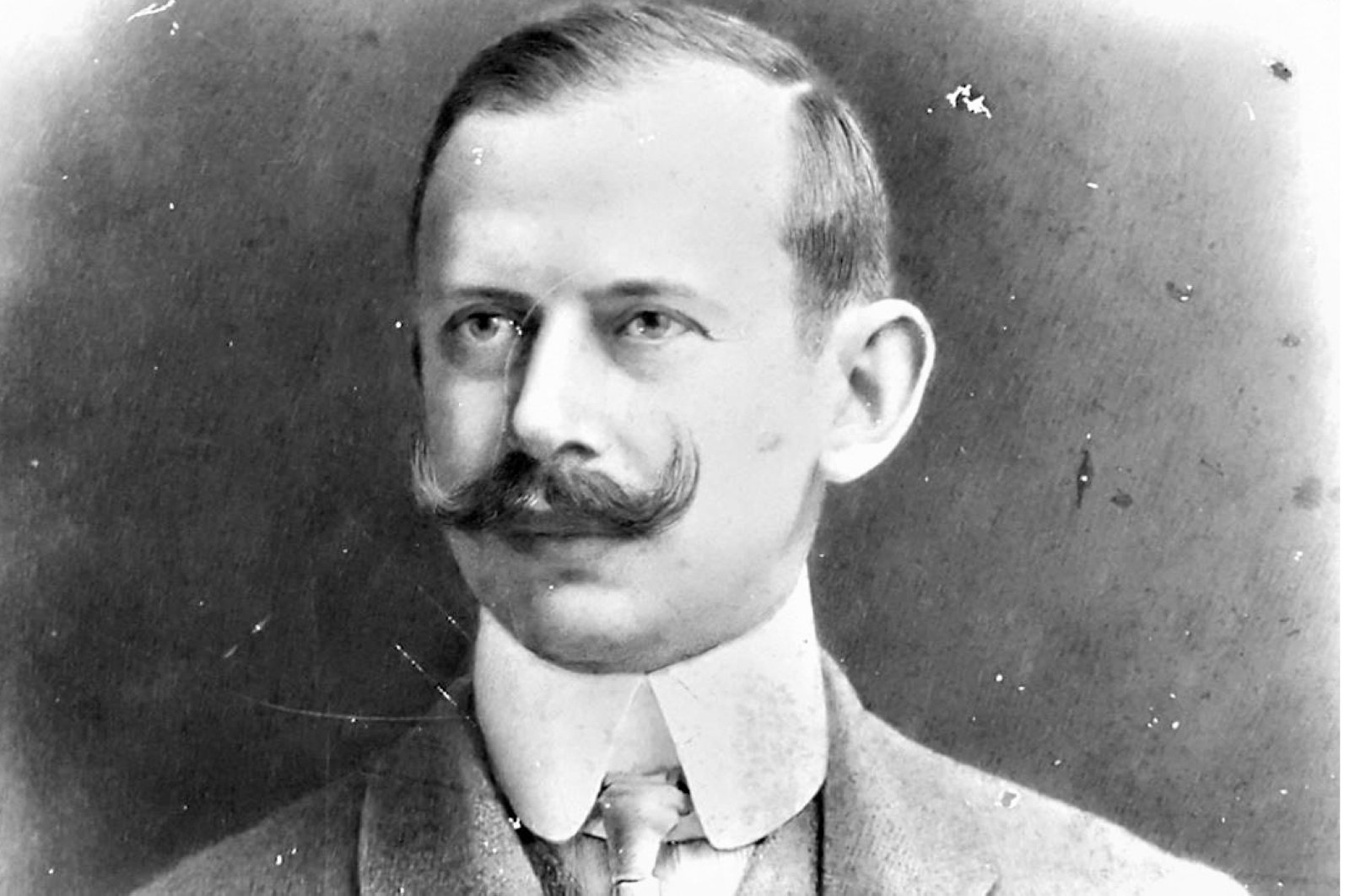 Sigmund Weinberg was one of the people who brought the technology of cinema to the Ottoman Empire. (Courtesy of Istanbul Modern)
by ALİ TÜFEKÇİ Jul 07, 2020 1:37 pm
Edited By Irem Yaşar

A member of a Jewish family of Polish descent but Romanian nationality, Sigmund Weinberg served as a photographer and director for both Sultan Abdülhamid II and Sultan Mehmed V Reşad a century ago during a period of constant transformations

Directed by professor Savaş Arslan, “Bir Sigmund Weinberg Belge-meseli” ("A Sigmund Weinberg Docu-commentary"), which tells the story of Sigmund Weinberg, one of the pioneers of Turkish cinema, had its world premiere on digital media last week. Released on the website of Istanbul Modern for two days, the film will be screened through other media channels in the following weeks.

Little was known about Weinberg, who was the official photographer and filmmaker of Sultan Abdülhamid II and Sultan Mehmed V Reşad. Therefore, this film by Arslan brings to light many dark details about the artist, who was a critical figure in the birth and spread of cinema in the Ottoman Empire.

While Arslan was working on his book “Cinema in Turkey: A New Critical History,” he encountered Weinberg's name in the dead of night. Who was he? The information available about him, although remaining somewhat unclear, showed that he was a member of a Jewish family of Polish descent but Romanian nationality. Born in 1867 or 1868, Weinberg came to Istanbul in 1885 and opened an optical and photographic material shop. Allegedly, he made the first film screenings in Turkey, opened the first movie theater in 1908 and is known for being the representative of the French Pathe film company in the Ottoman Empire.

Although this information roughly outlines who Weinberg is, his life, his family and what happened to him after the fall of the Ottoman Empire is a mystery. Arslan's research began with this brief information and developed into a film.

Cinema was not an invention by one person. The technology of photography developed in different hands over time and evolved into cinema. Photography and cinema entered the Ottoman territory when they first appeared on the world stage due to Sultan Abdülhamid II’s interest and attempts to bring them to the Ottoman Empire.

Weinberg was one of the photographers taken under the care of the palace. Sultan Abdülhamid II supported and directed all photographers in the country at the time. The earliest photographs of the Ottoman era date back to his reign. He had photographs taken of all the statesmen, including himself, the army and even inmates in prisons. The entire Ottoman territory, including Istanbul, Mecca and Medina, was also photographed upon his request.

Was Weinberg the one who brought cinema to the Ottomans? Yes, he was one of the people who brought this technology in his era, but he was not the only one. From the first quarter of the 1900s, cinema gradually became an important part of entertainment life in Istanbul, with longer and more extensive film screenings.

The organizers of film screenings in these years were Istanbul’s artisans, Ottoman merchants who followed the technologies of the period and businessmen from abroad. Among those who were instrumental in the introduction of cinema to the Ottomans were Weinberg, French painter Henri Delavallee, music hall and circus operator Ramirez, French palace illusionist Bertrand, engineer and film equipment manufacturer Pierre-Victor Continsouza and Yıldız Palace’s interpreter Sabuncuzade Louis Alberi.

The first film was screened in 1896 by a Frenchman named Bertrand who organized cultural and artistic activities at Yıldız Palace. Sultan Abdülhamid II watched the film with his family and took great interest in it.

In 1897, Weinberg started to show films to the people of Istanbul as the Istanbul representative of Pathe Film. These screenings were short but engaging pastimes attended by families, including children. From that year onward, film screenings continued to increase.

The machine used in this screening was brought by Weinberg from France. It was a projection machine that produced light through oxygen, used in early cinema technologies of the pre-electric era. He projected minute-long films on a 2-meter-wide screen.

After carrying out screenings in various places, Weinberg in 1908 opened the Pathe cinema, the first established cinema hall in Istanbul. He operated this hall until 1916.

Weinberg produced films of historical importance as well as operating the movie house and broadcasting and distributing films. In October 1899, he wrote a letter to the sultan in order to film the Ottoman army. He also presented the sultan with a catalog of cinematographers, which are motion picture film cameras also serving as film projectors and printers.

The French Pathe is one of the film companies that operated in the early years of cinema in the Ottoman Empire. As in many countries, they opened a representative office in Istanbul.

Nearly all of the films screened from 1902-1913 belonged to Pathe. The company was the sole dominator of the Ottoman market with its distribution network. It did not limit its investments to Istanbul and opened movie theaters in Izmir and Thessaloniki, two of the most cosmopolitan cities.

Weinberg also made records in the name of Pathe film that were watched in Ottoman territory. Thanks to him, many historical happenings were recorded on film. He filmed one of Sultan Abdülhamid II's Cuma Selamlığı, a tradition practiced by Ottoman sultans on their way to Friday prayers, in the Hamidiye Mosque in 1908. He also recorded other important events of the period, such as the election held in November 1908 and the opening of the Assembly in Istanbul.

Weinberg also filmed Sultan Mehmed V Reşad, who ascended to the throne after Sultan Abdülhamid II. He recorded the parade of the Ottoman navy at a ceremony at which Sultan Mehmed V Reşad was present in 1910. Documentary films, which he took by approaching the sultan as close as 5 meters away with special permission from the sultanate, were screened in various halls.

Additionally, he shot occupied Istanbul and filmed many current cases. These included sports competitions, the funeral of Greek Orthodox Patriarch Joachim of Constantinople and some large fires in Istanbul. He was documenting history with both films and photographs.

Weinberg was a figure with supreme commercial acumen, foreseeing the future of all kinds of innovation. Between 1885 and 1889, his shop both assumed representation of various foreign companies and imported photographic material.

By the time of World War I, the film industry had developed considerably. Thus, it was used as one of the most effective means of propaganda. The government of the Committee of Union and Progress (CUP), which dragged the Ottomans into the war, wanted to use it well.

During this period, Weinberg was appointed head of the Central Army Cinema Department (MOSD), which was established by the order of Enver Pasha, minister of war and acting commander-in-chief. He was ordered to film the Romanian and Galician fronts. These important images were shown in the Palas Cinema on June 9, 1917.

Although he always considered himself an Ottoman citizen, the concept of the nation-state of the new world prevailed after the war.

What did Weinberg do after the founding of the Republic of Turkey? Information about him is scarce as he was pacified during the war years. His wife Caroline moved to Tel Aviv in 1927, with her son-in-law Josef and daughter Regina. Weinberg continued to live in Istanbul after 1927.

He died in 1936, and at the initiative of his other daughter Elsa and son-in-law Harry, who lived in Romania at the time, his body was brought to Bucharest and was buried there.

Weinberg was not just someone who sold a variety of technological products in his shop, screened films and operated movie theaters. He was also a very important photographer and, more than that, the first filmmaker to have lived in Istanbul.

He not only brought cinema to the Ottoman Empire but also started filmmaking by establishing all of its infrastructures. While considering who was the first filmmaker, the names of Fuat Uzkınay or the Manaki brothers come to mind. However, we need to add Weinberg to the list and even put him in front of them, because Uzkınay, who is considered one of the pioneers of Turkish cinema, learned much technical information about film screening from Weinberg.