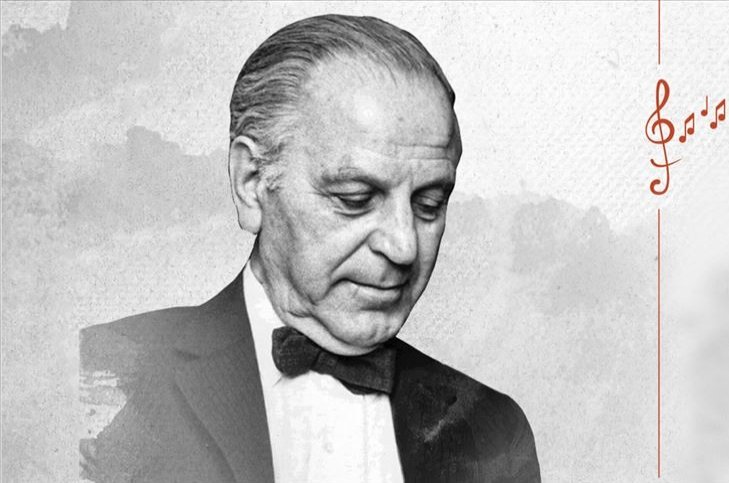 It has been 38 years since the death of Ulvi Cemal Erkin, who was one of the first-generation composers born in the early 1900s. In memory of the master composer, who was one of the "Turkish five" – the name used to identify five pioneers of Western classical music in Turkey – here is his life story in short.

Erkin, a musician, music teacher and conductor and one of the prominent composers to have led contemporary Turkish music, was born in Istanbul on March 14, 1906, to Mehmet Cemal Bey, a senior bureaucrat, and Nesibe Hanım. He became interested in music as a child while his mother was playing the piano and his older brother was taking violin lessons.

The artist received his first musical education from his mother at a young age and took piano lessons from Italian and French music teachers when he was 7. Erkin made great progress in a short time, proving his talent in this area.

After graduating from Galatasaray High School at the age of 19, he cleared the exam held by the Ministry of National Education (MEB) for overseas education and went to Paris in 1925. Erkin studied piano with French composers Isidor Philip and Camille Decreus at the Paris Conservatory, harmony with composer, choir conductor Jean Gallon. He also learned counterpoint from French composer and music educator Noel Gallon, as well as composition from composer, conductor, and teacher Nadia Boulanger at the Ecole Normale de Musique de Paris.

When Erkin returned to Turkey with his diploma in 1930, he was appointed as harmony and piano teacher at the Ankara Music Teachers School. When the school was reorganized as the State Conservatory in 1936, Erkin continued to teach piano lessons there. The famous composer served as principal from 1949 to 1951 at the state conservatory and as conductor of the piano department and piano teacher until his death.

The artist performed the first concert of his own compositions in 1946 and wrote his first work “Iki Dans” (“Two Dances”) for orchestra and “Ninni” ("Lullaby"), "Emprovizasyon" ("Improvisation") and "Zeybek" (folk heroes of western Anatolia) for violin and piano, in Paris.

After he was appointed as a teacher, Erkin took up important positions as a soloist with a piano concerto, and sometimes as a composer, commentator, teacher and conductor, and pioneered the popularity and dissemination of classical music.

In 1932, he married Ferhunde Remzi, who graduated from the Leipzig Conservatory and was appointed as a piano teacher at the Music Teachers School. The duo shared each other’s excitement, happiness and success at the concerts they performed at home and abroad in their lifelong union and dedicated themselves to educating young musicians and spreading polyphonic music with limited opportunities.

Erkin participated in the composition competition held by the Republican People's Party (CHP) in 1943 with "Köçekçe" (a musical genre) and “Piyano Konçertosu” (“Concerto for Piano”). The “Piyano Konçertosu” was awarded the prize at the competition and was interpreted by the Presidential Symphony Orchestra (CSO) and then by the Berlin City Orchestra with the performance of Ferhunde Erkin as the soloist in the same year.

Erkin was awarded the honor and merit insignia of the French and Italian states for his achievements in art life and granted the title of "national artist" in Turkey in 1971. In his memory, a stamp was printed in 1985.

While his works are often interpreted both at home and abroad, Erkin personally conducted concerts at the Czech Philharmonic Orchestra, the Colonne Orchestra and the Paris Radio Symphony Orchestra.

The successful artist died from a heart attack at the age of 62 in the capital Ankara on Sept. 15, 1972.