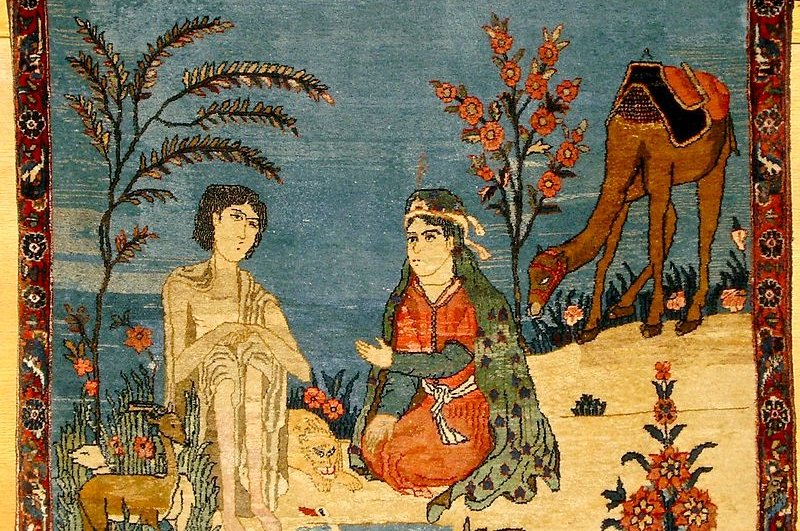 Among the famous love stories in world history and literature, the romances of couples from Turkish literature are perhaps some of the greatest ever told

In Turkish folk literature, anonymous stories told by storytellers known as aşık (bards) in public spaces are called folk stories. Revolving around real or real-like events, these stories were very popular among the Anatolian people in the 16th century. They filled many long nights by touching the listeners deeply and became a tradition.

The folk stories are separated into two groups in line with their themes. While the first group of stories tells the heroic events like in the “Epic of Köroğlu,” the second group of stories are about love. Let’s take a look at the most famous couples and their heartbreaking dramas.

Layla and Majnun (Leyla and Mecnun)

Layla and Qays (Kays) fall in love with each other at first sight in their childhood. Qays is so sure of this love and begins to write love poems for his lover. His fondness for Layla causes people who hear about their love to refer to him as “Majnun,” which means "crazy" in Arabic. As knowledge of their love spreads around the community, it becomes impossible to hide it from their parents. Upon this, Qays finds the courage to ask Layla’s father for her hand in marriage. However, the father refuses by informing the young man that his daughter cannot marry a guy named "crazy."

With imponderable grief, Majnun disappears in the deserts by living an isolated life among wild animals. In his time in the wilderness, Majnun replaces his material love for Leyla with divine love and becomes a hermit. Layla is also miserable and is forced to marry another guy. After her husband’s death some years later, Layla hopes to be with her only love again and goes to find Majnun. When she finds him, Majnun does not recognize her material being. It is then that Layla understands they will never meet again in this world. Finally, she passes away with a broken heart. Hearing her knell, Majnun comes to her grave and cries over it. Mourning to God to take him as well, Majnun also dies soon after.

One of the loyal friends of Majnun sees the couple in his dream later on. In the dream, they are in the garden of heaven together, symbolizing that the duo reunited outside the confines of time and the material world.

This story's tragedy mirrors Layla and Majnun. A shah living in Iran is without an heir for his wealth. Seeing his deep sadness, an old dervish gives him an apple for his wife. The next day when she eats it, the wife of a priest begs the shah’s wife to eat some as she cannot have a baby either. Sharing the apple, the two women make a deal that their children will marry in the future. The shah’s wife gives birth to a son; the priest's wife has a daughter. However, when the children grow up, the priest's family does not want their daughter to marry a Muslim. So, the family runs away to other cities but are followed by Kerem as he has already fallen in love with Aslı at first sight. The priest tries to marry his daughter to another man, which leads to Kerem and Aslı’s immediate marriage. Upon this, the priest gives a cursed shirt to Kerem saying it is a marriage gift. At night, Kerem tries to take off the shirt, but its buttons close back up. Finally, the shirt bursts into flames, burning him alive. When Aslı cries over the ashes of Kerem, her hair also catches fire and she joins her lover in death.

Shirin and Farhad (Şirin and Ferhat)

Another heartbreaking romance, the story of Shirin and Farhad features some superhuman elements. Living in Turkey’s Amasya province, Farhad falls in love with Shirin, the sultan’s daughter. When he asks the sultan for the daughter's hand, the sultan demands the completion of a difficult task before granting consent for the marriage. He says that they can marry only if Farhad brings the water behind the mountains to the town, which is impossible. However, Farhad, who is a handsome and strong man, makes a hole in the mountains and manages to build a canal to carry the water. Meanwhile, Shirin is told that Farhad is dead. The girl, who cannot bear the sorrow, kills herself. On his way back to the palace to meet his lover, Farhad also learns the fate of Shirin and kills himself. The lovers are buried side by side.

The story of Zühre and Tahir is similar to Aslı and Kerem’s adventure. A childless sultan and vizier disguise themselves and go to the bazaar. In the bazaar, a dervish sees the duo going on their way. When the sultan asks the dervish what his and the vizier’s wishes are, the dervish knows that the wish in their hearts is the desire to have a child. Upon this, the sultan asks him for help. The dervish takes an apple from his pocket and divides it into two by presenting one part to the sultan and the other to the vizier. The dervish tells them to eat the apples at night. He also says the sultan will have a daughter and the vizier will have a son. They should name the girl Zühre while naming the son Tahir and then marry them. He states that if they do not marry, their love will be a saga until the apocalypse. When Tahir and Zühre, who were born and grew up at similar times, reach the age of marriage, the words of the dervish are not followed when the sultan's wife opposes. The sultan's wife turns the sultan against Tahir with a special magic, and Tahir is sent to the dungeon. Since Tahir refuses to give up on Zühre, it is decided he will be executed. Tahir wants to pray before the execution and begs God to take his life right there. Tahir passes away, and Zühre cannot bear the pain of losing Tahir and loses her mind. When she visits the grave of Tahir, she also dies.