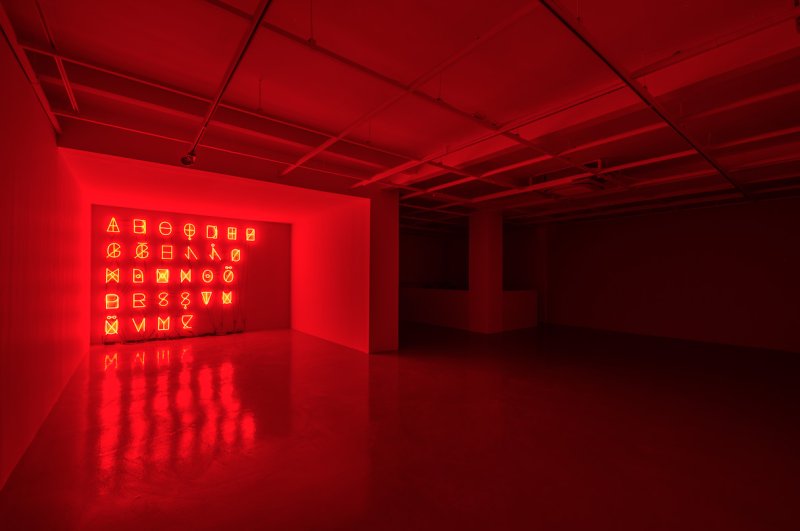 For her current show at Galeri Nev Istanbul, ‘Everything Interesting Takes Place in the Dark,’ contemporary artist Aslı Çavuşoğlu returns to Turkey with a neon exploration of language through her new font, ANNEX

It is dark on the fourth floor of the Mısır Apartment building on Istiklal Avenue, the home of multiple art spaces. A single spotlight reflects off one side of a hallway leading through to a dim, red haze. On one side, a text in Turkish explains certain details about the installation in a style familiar to art-goers. It is more obscure in expression, transcending the literal didactics of art-speak toward a holistic embrace of the visuality of language itself as integral and seamlessly subtextual to works of visual art.

The relationship between literal text and visual art has a history that spans the origins of both mediums, as separate and of a common source. Moderns often express their relativity as a merging of their forms, while their distinctions are still subject to overeducated exercises of verbose, abstruse argumentation and a wide variety of creative practices that have either yet to be categorized, or which have slipped through the cracks of critical definition. The interior, architectural design for “Everything Interesting Takes Place in the Dark” is vital to its concept.

On the ambitious road to confronting the prehistoric predicament that rages when differentiating the appreciation of visual art as both unique from language and intertwined with its manifestations, Aslı Çavuşoğlu is Turkey’s most promising emissary. With her works in the permanent collections of the prestigious Museum of Modern Art (MoMA) in New York and finalizing her solo exhibition at the New Museum in the Bowery of that island city last year, Çavuşoğlu is not only young, born in 1982, but indispensable. Simply, her voice matters.

And along one of the rowdiest streets in Istanbul, with the infamy and glory of Istiklal clamoring sleeplessly, she speaks in silence in a linguistic script yet to be seen but drawn from close documentation of street art, graffiti and its alternative tradition of counterattack additions, a conflict-ridden autonomous collective impulse that has antecedents as far back as the first cave painters whose fearful murals of big cats and stampeding herds are the results of tens of thousands of years of repainting and alteration.

The awakening of neon

But inside Galeri Nev Istanbul, the ambiance is more cutting edge, its crimson fade increasing in vibrancy approaching the work itself, which is around the corner in the basic cube-like frame of one of Turkey’s more seasoned commercial galleries. Out of immediate view, “Everything Interesting Takes Place in the Dark” has a psychodynamic allure. Mike Nelson executed an aesthetically similarly immersive light installation for his site-specific series of sculptures and videos, titled, PROJEKTÖR (Gürün Han).

Yet, where Nelson activated a decidedly unstylish nook in the old town within the walls of ancient Constantinople, what is now mostly known as the inner-city district of Fatih, Çavuşoğlu stepped aside – not exactly forward into a different vision of the future. Her art has the enveloping capacity to transport its viewers into an alternate present. The piece, despite exuding a lit charge, is entrancing, as the bewildering shapes of its fictive alphabet are as uncanny as they are comprehensible.

Evading complete opacity in the face of utter originality is the talent that Çavuşoğlu maintains as a world-class artist born of a Turkish milieu in which contemporaries are besieged by a largely chauvinistic culture sector. As language is a bastion of national affirmation, her art serves as an antidote against an air of monolithic toxicity. While reminiscent of Turkish letters and bearing the same number of them, 29, ANNEX adapts the Latinization of its script into an electric scheme of formal variations.

And still, a patient seer may gaze and discern the correlation of ANNEX to Turkish, reading the wall text side-by-side. That her font is practical, even legible, is her contribution to art’s potential to trigger the transformative nature of seeing. In a corner of the art world where explication, politics and history are essential keys to unlocking greater public awareness of new cultural expression, “Everything Interesting Takes Place in the Dark” is an anthem to deeper complexities, and the individual impulse to gain knowledge independent of popular account.

In the eye of the tongue

The retro trend to refocus the hyper-digital, post-realism of early 21st-century art back to the late 20th century is finding an apt channel of release in unbroken lines of neon artisans. For his contribution to the 16th Istanbul Biennial last summer, artist Glenn Ligon utilized neon as vessels through which to mark calendar dates. Ligon’s oeuvre is greatly indebted to the inventions of language, and his approach to the resonant character of neon was a welcome nuance within his pack of installations at the Mizzi Mansion on Büyükada island.

More recently, a young, British sculptor and light designer April Key participated in an all women's group show in Çukurcuma for which she researched and collaborated with a multigenerational neon-making workshop in Kadıköy. The organic contours of her neon tubing were to recreate the Art Deco wave of mid-20th century Miami, though when switched off, their sculptural platforms evoked a Neo-Bauhaus order of minimalist industrialism. Çavuşoğlu is also a pragmatist when it comes to her employment of neon beyond the look of their radiations.

“In each piece, the primary marks are rendered in a cooler tone, while the overlays are presented in a hotter one. Through this superimposition, the audience can differentiate the coded letters hidden beneath their attempted erasure,” wrote Adam Kleinman in an essay accompanying the show’s duration. “This paradox predicated on a word being both present and absent, provokes the reader to wrestle with the author to establish intention as well as to question the very nature of signification itself.”

Not far from Galeri Nev Istanbul, down the overburdened city’s European slopes to Dolapdere, the veteran Turkish contemporary artist Ayşe Erkmen launched her solo show at Arter with a piece, “Typed Text” (2019), playing with the fundamental concept of perception, framing her retrospective of works so that eyes may speak, and tongues see. But in her non-referential, standalone piece, “Everything Interesting Takes Place in the Dark”, Çavuşoğlu created the ANNEX font with designer Özer Yalçınkaya as an invitation.

To peer into the light that is “Everything Takes Place in the Dark” is to enter a nebulous nether realm of the international art world, a reality parallel to normalized, quotidian life, but not exactly bound to natural laws that might seem universal, for its cerebral, malleable environment of conceptual and plastic engineering, in which most knowledge and experience is remote, past, and scattered, particularly in Turkey, where exportation, exile and diaspora are mainstays of the current generation’s artistic character, of which Çavuşoğlu is exhibit A.