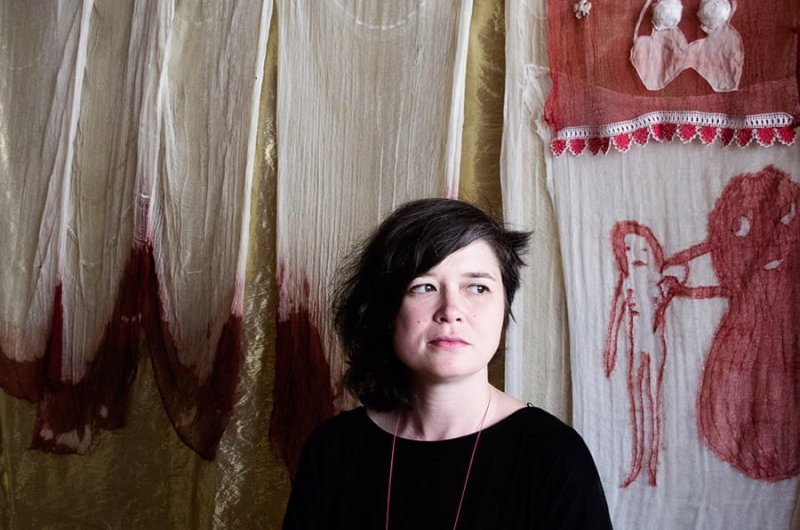 Güneş Terkol is presenting a selection of recent woodcut prints, silkscreens and lithographs in her latest solo exhibition at KRANK Art Gallery alongside works produced as part of the 16th Istanbul Biennial for an installation titled ‘Warlbmon,' produced in collaboration with Güçlü Öztekin.

In days of yore, the land was awash with studios where artists could receive training and support each other’s development and work. As a result of the coming and going of various movements, however, one has since observed the rise of individualism in art and among artists themselves. But no matter how impressive the solitary genius may be, the power of working and producing in unity cannot be ignored. To prove this, a number of collectives are still embracing the spirit of joint creations. Istanbul-based HaZaVuZu, founded by Güneş Terkol and Güçlü Öztekin, is one such collective. Focusing on the artforms of music, video, performance and design, the collective was selected among those to attend the 16th Istanbul Biennial, held between Sept. 14 and Nov. 10, 2019, and contributed with an installation at the Istanbul Museum of Painting and Sculpture. This temporary construction installation, named “Warlbmon,” is comprised of drawings, sculptures, stitchwork and woodcut prints.

“Çayka,” Terkol's work depicting two seagulls paired as a duo on separate fabrics, appeared together as part of the “Warlbmon” piece. Noting that these seagulls were real birds who actually arrived at their workshop on a daily basis, Terkol said she deliberately placed the work alongside more recent pieces in her latest solo exhibition “A Duo,” at KRANK Art Gallery, located in Istanbul’s bustling Beşiktaş district. Unveiled on Feb. 13, “A Duo” focuses on various types of duality. Hinting that she had built the exhibit around this concept after realizing she had seen many dualities in her milieu, Terkol said such dualities even started to form a place in her dreams as well. The artist first jotted down her dreams before later turning them into patterns. This is how “A Duo,” featuring dualities such as sunrise-sunset and togetherness-separation, came into existence.

Before delving into a show, it is always helpful to learn more about the creator to get a feel for their mindset. Güneş Terkol, who was always interested in painting as a child, naturally found herself going on to study fine arts in high school and university. Following her education, she involved herself in both solo and collective projects with HaZaVuZu. Since those days, the productive artist has been displaying her works at home and abroad.

Speaking to Daily Sabah, Terkol said she found it very entertaining to have a job that required one to always be searching and creating. “In the production process, you, as an artist, always come across new obstacles. But you have to try and find new ways to reveal your voice and words. The challenging part of being an artist is that this job becomes your life. If you are a type of person who wants to leave your job at the office, the art world is not for you.”

Terkol mostly focuses on issues of social gender and class through fabrics, stitchwork, patterns and vocal works. For example, she has been organizing collective workshops with women from different countries for 10 years. As part of these workshops, women of various sociological and economical backgrounds decorate fabrics by reflecting on their personal experiences and resisting stereotypes. However, the artist does not limit her artistic practice to one subject and constantly diversifies, as she is not married to the idea of offering art audiences a sole subject with a single perspective. It is to this end that Terkol has used the binary elements that she observes in her daily life for the latest show at the KRANK Art Gallery.

As part of her creative process, the thing that motivates and inspires Terkol can change accordingly. Just as it can form a story, a place or a fabric piece, it may potentially form an impressive sound. Thus, in her artworks, she transforms fabrics by embroidering figures and scenes inspired by personal and collective stories. Creating designs first, the artist then tries to find appropriate color shades by applying natural paints to fabrics. Generally a fan of transparent colors, she creates her own figures by then applying stitchwork to her works. Although she produces artworks influenced by the environment she lives in, her works in “A Duo” are also full of compositions that are surreal and symbol-laden.

Myths and fairy tales are the wisdom and aphorisms of the past that express themselves through the language of symbols. Myths, which are among the oldest creations of human history, and dreams, which are the products of our everyday experiences, display a surprising similarity to one another. Essentially, both are treasures of experience and memory. Furthermore, in the state of sleep, when we are free from all external pressures, we become more realistic and free than when we are awake. A lot of the things that we suppress and push away or don’t want to hear or see when we are conscious find a voice and confront us in our dreams. Güneş Terkol’s delicate and translucent works lead us into the world of dreams and myths and tell us fairy tales that are essentially real. These artworks, both temporary, yet as convincing like fairy tales, seem to belong to an enigma of riddles that pass through a realm of magic.

“A Duo” welcomes visitors with the following verses:

“A duo, one is mind, the other is heart

both smiling and frowning.”

Güneş Terkol reveals the balance that dualistic concepts, such as body-soul, mind-heart, happiness-grief create in an integrated state of existence in this show, resembling a film screen. Terkol explained that the exhibition is comprised of three parts: “The works in the interior of the gallery consist of intertwined stories and hang from the ceiling. These works are followed by others in the corridor of the gallery, and eventually the show ends with three site-specific works accompanied by the sounds of water in the back garden,” Terkol said.

The exhibition, which will be on display until March 20, will also be accompanied by the first-ever book published in the artist's career. In Terkol's words: “This book is the most exciting thing about this show for me.” The book, which is a kind of retrospective on the artist’s works and practice, was designed by Ece Eldek and includes texts by Ali Akay, Bige Öger and Sibel Erdamar. After embarking on a journey at the exhibition, be sure to check out the book, which reveals the cornerstones of the artist’s career in fascinating detail.