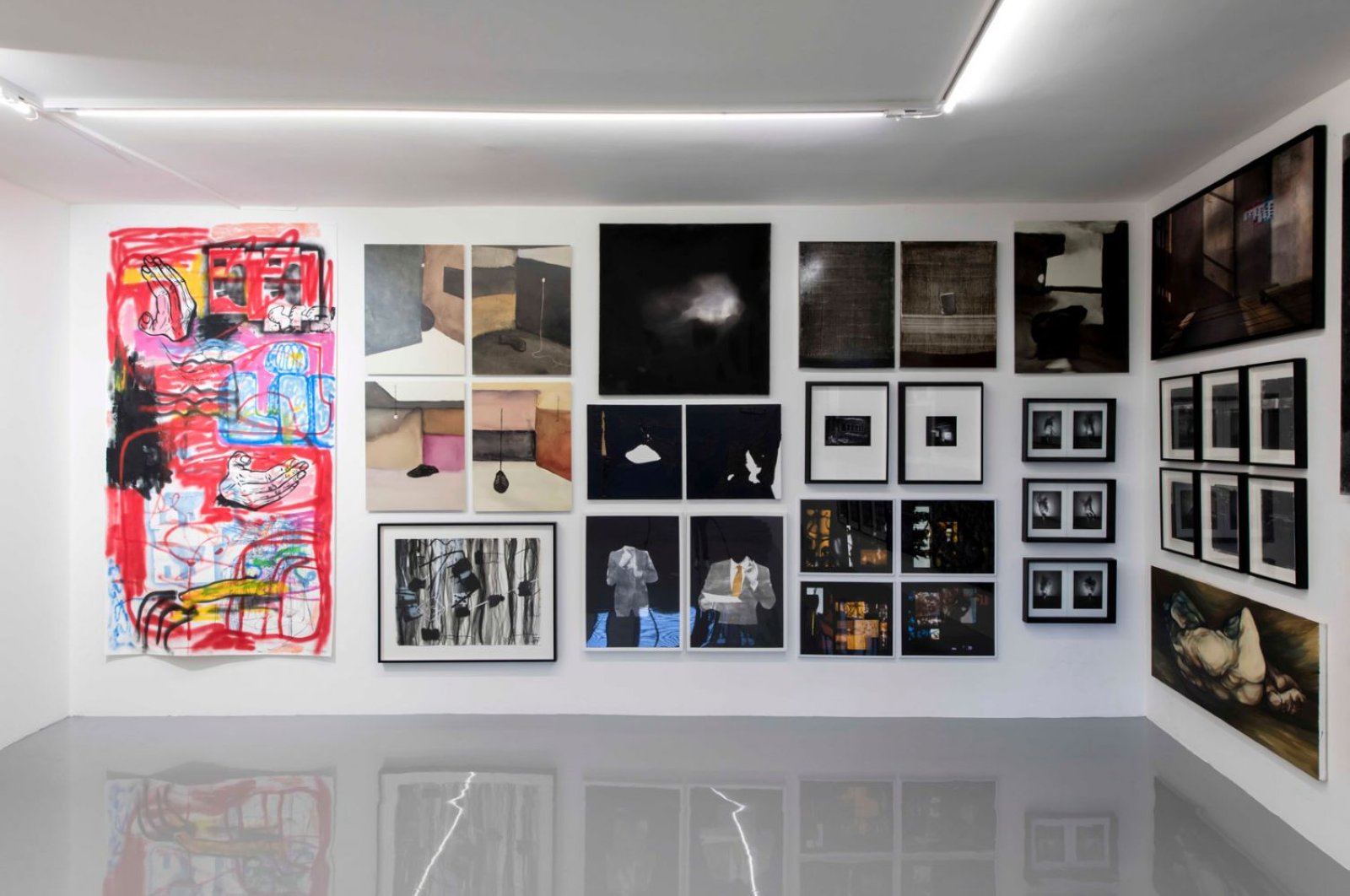 At the commercial gallery, ArtOn in Istanbul, located beside Pera Museum, works by 23 artists and one collective are splayed across the walls of the three-story loft in variations as infinite and fresh as the waves of the sea.

Is there rhyme or reason to the daedal salmagundi of artworks that, in the spirit of Jackson Pollock, will cover the cubistic interior of ArtOn for the hot season? Like the drips and smears of an action painter splattering to abandon, the current exhibition, “Eternal Summer," is a grab bag group show of figments of objects floating as on the eccentric stream of its intuitive, illogical curation. What might be gleaned out of its variegating motifs, its pairings and arrangements of rectangular hangings and sculptural textures?

To each their own, as the Romans said, doing as they did, whether being or not being. And isn’t that art’s primary question? To express one’s sheer existence, to live an examined life, from such inquisitive states of mind the creative impetus unfolds, ensorcelling those who would otherwise not know where to find it. Like magic, blown out into the air, ungraspable, by a single poof of fairy dust, the muse materializes into a burst of countless particles, spells and divinations of a paranormal, visual order.

Up, up and away, eyes wander toward the clouds. A vast, rolling saga of cumuli blanket the azure empyrean like the beginning of a long, deliberate story, the voice of the teller pausing frequently to let the spacious air ring with meaning. It is simultaneously the backdrop and foreground of an acrylic painting by Uluç Ali Kılıç, entitled, “Tollgates” (2013), for its outline of turnstiles seemingly cut out of a slice of everyone’s daily commute in Istanbul. The effect of contrasting quotidian mechanics with a common view of the sky is pacifying and elevating.

Placed on the upper floor, wherefrom the displays of ArtOn descend, “Tollgates” is immersed in an effulgent, urban environment, as glass-filtered natural light pours in from over the horizon of the Golden Horn. Into the hill-crested storefront facade, sights and simulacra of originality and invention peak, trained through self-guided spheres of color and form. But as the ancient adage of Buddhist philosophy popularly translates: “Form is emptiness and emptiness is form.” With that knowledge, Kılıç has imparted a familiar, yet transcendent vision.

Innumerable as the clouds, digital artist Erdal Inci coursed the human figure on repeat, cast like a glitch harmonic, spread over a post-industrial cityscape. In the Diasec print, a bleak intersection of streets is populated by an unnatural breed of technological being. By his twist of wit, Inci titled his piece after an insect, “Centipedes” (2015), for it resembles the segmented invertebrate covering ground space like the trill of a singer. The piece has an unsettling quality. After the dust of the apocalypse has settled, Inci watches anthropomorphic mutants emerge.

The tangled aesthetic of “Centipedes” has magically surreal urban motifs, like “Tollgates," but in terms of pure visual vocabulary, they are akin to a piece situated just above and besides these two works. “Ram Antler” (2019) by Olgu Ülkenciler might seem crude and even amateurish in its design, craft and coloration compared to the scintillating “Tollgates," or the technological wizardry of “Centipedes," but the oil on canvas is surprising in its poise, instilling a sense of painterly conviction steeped in the nodes of cyberspace and the subconscious.

On entering ArtOn, the curation of the upper right-hand corner of the gallery is pieced together with a random, but captivating sensibility. Besides the work by Kılıç, minor works by Mithat Şen and Burcu Erden grace the most compact section of wall in the bijou interior. Yet, it is arguably where the eye is least liable to focus and apprehend a sight where the most exciting potential for discovery lies. Şen is an abstract sculptor of an order all his own. It is questionable whether it is even possible to pigeonhole his plastic art of mounted parchment.

Lobster-shaped, his third edition from the series, “Istif IV” (2019) hangs cloud-like above “Tollgates," as a clawed sea creature, flying purple into the wilderness of the non-representational imagination. And white as the bursts of moisture that tickle the atmosphere in puffs and billows, Erden’s paper abstraction, “Untitled” (2020) is a hint of a whim leading to the visceral power of her sculptural oeuvre, mostly etched out of blocks of wood. Another untitled work by her, though in her main, arboreal medium, conveys her ingenious fantasy of humanoid configurations, embodied in raw timber, blacked at the edges of her proto-human effigies.

Wandering eyes are not lost

A hard light casts its beaming rays across Erden’s untitled wooden relief. The piece was part of her debut solo show, “Calling for the Mass,” in 2019 at ArtOn. Most of the works from that show grew up out of solid, raw blocks of wood, as her simian creations reached upward and into the ether out of some deep-rooted artistic spirituality, shedding the clunky embodiment of earthly form to behold the emptiness at work throughout nature and the cosmos. And beside Erden’s sylvan venture, the collective Oddviz produced a more metropolitan introspection.

As innovators in the burgeoning field of virtual installation, the three-man team at Oddviz continue to craft photogrammetric works that delve into the urbanized landscape with a keen mind for points of transition, dissolution and imposition. They effectively salvage the consciousness of city-dwellers and repackage it in tight-knit packages of visual dissonance. “Kadıköy I” (2018) is a melange of neighborhood nostalgia, featuring an Ottoman fountain, graffitied post office box, bygone street decorations and a much-missed junk car.

Oddviz has mastered the use of artificial light, a staple technique for artists of any age. Yet, their hyperreal technologically-infused collagist adaptations of street memory are akin in certain respects to the neon-shimmering experiments of Ahmet Elhan. His series from 2018, “Notes from the Underground” is an eclectic surge of multicolored flares, an overwhelming escalation of strobes and blurs. Its curation beside Oddviz and Erden further explores the chaos of disparate, clashing elements with Sencer Vardarman’s “Church” (2017).

One distinctively striking piece in “Eternal Summer” is a fine art print, “The Scene” (2018) by Begüm Yamanlar. Its careful schemes of shadow and light evoke the emptiness of city life, its abandoned zones, unpeopled and as futuristic as it is indicative of the forgotten past. As for standalone sculpture, the elegant works of Işıl Kapu, in pink travertine and marble elevate the urbanity of the show’s overall atmosphere to the realm of cultural sophistication, as from the prehistoric motifs of Erden, to an optimistic vision of eternity reminiscent of the ancient world.