Art at home: An online, winter show by Blue Rhino 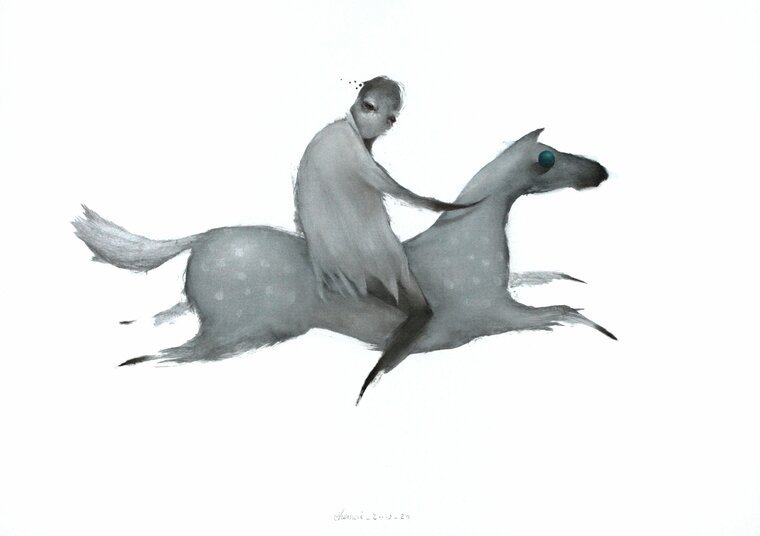 Blue Rhino, an arts consultancy by curator Tima Jam was fresh for Istanbul, hosting exhibitions with Turkish and Iranian artists side by side. Its latest installment, now based in London expands its vision to the moment

"Stay Art Home" is an exasperating play on the words, "art" and "at." As a preposition, the meaning of "at" demands context. Art also exists in direct relation to its conceptual and physical surroundings, oftentimes more acutely by its times, hence the perennial definition of modernism. Yet, during a winter of lockdowns, devoid of commercial and cultural life beyond the confines of domestic spaces and the occasional outdoor nook, the arts persevere, for their capacity to adapt to the newness and to pervade the zeitgeist of multimedia innovation.

In Istanbul, Blue Rhino programmed its engagements with artists, curators, collectors and culturati through a mobile framework that traveled between galleries, studios and networks across Iran and Turkey, from the floors of Pera to the lofts of Tehran. Now in the U.K., while farther afield from its roots, in what might be described as the Middle Eastern north, Blue Rhino continues to make a case for the introduction of Iranian, Turkish and other fringe artists, together as a force of aesthetic and historical reinvention against Western predominance.

As a digital show of affordable artworks, "Stay Art Home" is open for virtual visitation via the interactive "KunstMatrix" platform. And sliding within the computerized space, a piece by the Greek artist Angeliki Papageorgiou comes into focus. It is a wash of mixed media coloration on a board canvas. The title, "La Fiesta" (2020), speaks to its pale interfusion of abstractions that, together, form a landscape of soft forms, generously open to interpretation. There is a figure somehow against a horizon, entering an opening, but everything is unsure.

Born in Volos, Greece in 1978, Papageorgiou paints beyond the markers of national identity with her own, individual style, towards holistic human expression. It is an approach that other artists within the Blue Rhino collective approximate and advance, while with their own special vocabularies and relationships to the traditions of representational technique that preceded them within their various cultural milieus. An example is the Iranian artist Mehrdad Khataei, whose work of mixed media on cardboard, "Crib" (2020) is shown at "Stay Art Home."

There are wisps of Persian calligraphy in Khataei's work, which integrates a finely drawn figurative portrait within an otherwise unfinished sketch of a woman and a dog. Khataei hails from northwestern Iran's Tabriz and became legendary to Tehran's art scene as influenced by printmaking. And "Crib" is part of a series that ventures further into color. His use of red is striking amid bursts of scenery that emerge within the illusive optical experience of his multi-layered visions. A pair of plump men are doused in otherworldly biota, downcast, unsmiling, as bright clouds appear.

Having transplanted operations from Istanbul to London, Jam is encompassing an increasingly broader swath of artists from across Europe. And as curated beside Turkish and Iranian artists she is trailblazing a new order of appreciation, inclusive of fringe perspectives. Similarly exemplified by widely respected London galleries such as JD Malat, representing Turkish sculptor Hande Şekerciler, Jam is adding an independent momentum to the management of these outlying arts communities within and outside of the international market.

That said, Jam curated contemporary Norwegian painter Johan Söderström for the "Stay Art Home" show, particularly his piece, "296 Turned Table - Wishing Well" (2020). It is a mixed media work that looks to be an agglomeration of eyeball-like shapes that form indiscernible, fluid patterns. Söderström works like a handyman, using home improvement tools that would have a certain resonance with the overall theme of Jam's curation. But considering his technical ingenuity, and its effect, it seems that much is lost in its digital perception.

Söderström crafts his own type of variation on "kintsugi," or Japanese cracked pottery, so as to tease out the history of the materials he uses, emphasizing cracks and textures. It was a tradition that the artist Sarkis more explicitly referenced in his recent show at Dirimart, "Untitled," using broken stained glass. But Söderström might be seen to have a kindred spirit with Khataei, with respect to the roughness of his final piece and their mutual medium-focus. With cement wood, Söderström has produced many series based on philosophical concepts. The latest works of Söderström, two of which are at the "Stay Art Home" show bear resemblances to his earlier pieces, while proposing an indescribable novelty of the design.

Following his abstract, textural pieces are more traditionally figurative color paintings by the Turkish artist Orhan Umut. Born in 1972 in southeastern Diyarbakır province, his observational works are uncanny evocations of the social and architectural environments from which he emerged to become a world-renowned painter.

In his "Untitled" series of four paintings, Umut depicts raven-haired personages wearing black shoes, and plain, casual, though slightly formal clothes. The colors red, green and blue run throughout. The curation begins with a vision of three women standing outside of a short building painted a vibrant blue. One woman holds the hand of a girl dressed in what looks like a school uniform. Two of the women talk to each other. They both wear red top garments. Umut's choice of color, according to the figure, is as puzzling as Söderström's rustic abstraction.

A single work by the young artist Vahid Chamani, born in Tehran in 1984, hangs in the midst of "Stay Art Home" like a gothic mood out of Washington Irving's macabre short story, "The Legend of Sleepy Hollow," or a Tim Burton film. It is an oil painting on cardboard, titled, "Amino Acids" (2020), and centers an anthropomorphic figure on a horse. The steed is just shy of technically exact to life, as its legs fade into the white background as if it were submerged in pure white snow.

The handless humanoid of Chamani's imagination rides on its back, without a saddle, looking out from bulging eyes. Whether consciously or not, the Iranian artist evokes the visage of Janus, the Roman deity of January, who looks backward and forwards at once. It is a fitting point of meditation as 2021 begins utterly dependent on the affairs of the past year, while the planet's inhabitants gaze longingly, and perhaps fearfully, to a future that has never seemed less certain. But what artists affirm is that the world is subject to the whims of creativity.