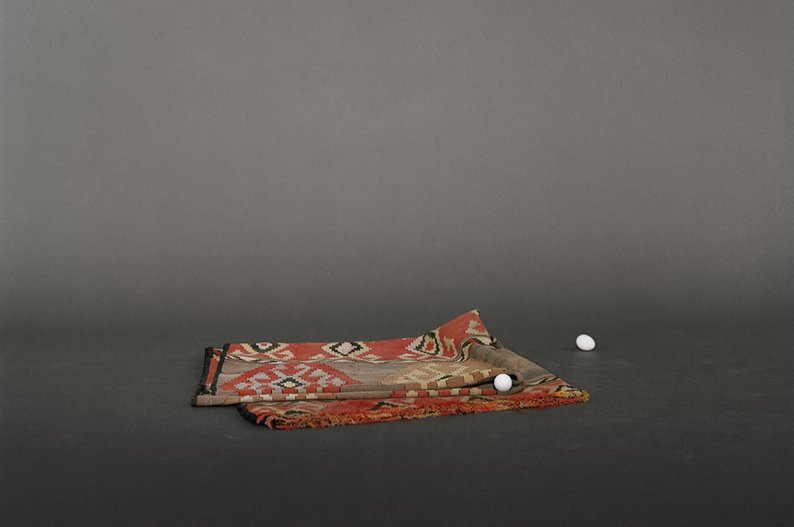 On March 20, Art Basel debuted its online viewing rooms, following suit with most of the art world which has largely gone remote amid the global pandemic. Istanbul galleries Pi Artworks and Dirimart are participating in its Hong Kong exhibition

A border is often conceived as peripheral. It connotes a frontier, the last gasp of pioneers out for a venture to see just how far they could go before confronting the other. But through the lens of Fatma Bucak, borders are exactly where connections are made and fostered, where new lands are seen and different peoples embraced. Still, her works are suffused with macabre moods, sharpened by her eye for pointing ever so directly at the greater context of an image, without picturing it.

In 2018, Bucak mounted a series of site-specific installations at Pi Artworks, a gallery in Istanbul with its headquarters in London. The show, titled, “A World of Ten Thousand Things,” referred to the Chinese dictum that touches on Taoist numerology. The essential idea is that there is only so much diversity issuing from the material world and that repetition comes in waves that, while imperceptible to most, adhere to certain patterns of creation. The artist is arguably one of the only roles in human work tasked with identifying these mythopoetic motifs.

“A World of Ten Thousand Things” brought Bucak to the border of Mexico and the United States, where she grappled with the themes of abandonment and survival common to human narratives along one of the most contested borderlands in the world due to the economic disparity between the divided sides. One work at the show leaped from her digitized videography and onto the terrace of the gallery, where she erected a broken column and stacked a pile of dead fish atop its severed figure, expressing a physical metaphor for Istanbul’s nostalgic port.

For the Hong Kong edition of Art Basel, online through March 25, a series of photographs titled, “A Study of Eight Landscapes” by Bucak is carefully curated via an online viewing room, eliciting much of the aesthete taste that she has grabbed and wrangled throughout her early but immensely successful career. Born in 1984, her artwork has flown around the world and appeared in flagship institutions throughout Turkey, including at Arter and Odunpazari Modern Museum.

“A Study of Eight Landscapes” traverses borderlines from the U.S. and Mexico back to the artist’s second home in Turkey, as she also splits her time in London. After finding discarded objects close to Armenia and Syria, her spirit of adventure for the easternmost extremities of Anatolia made for an otherworldly collection of sculpted and modeled figments of her far-flung observations, captured with deadpan sincerity. “A border view” (2015) might be near-homophonic with "a broader view," but it appears to internalize a deeply narrow pain.

The point and the line

“A border view” is grim. Its interior could have been shot at a detention center but for an animal skull that rests clean and presentably upright on dirty, cold flooring. There is an interplay of the blackness of night against hospital white between the fragment of a skeleton and a soiled garment hanging on the wall. Whether it is blood or dirt smeared through its light fabric remains a mystery, but the mortal truths behind its conveyance are clear. A border is also symbolic of that liminal space between life and what lies beyond the grave.

While simply photographed at her studio, the energy of the found objects that she has aestheticized through her extraordinary visual scope resonate with the polarizing environments from which they were extracted, where compromises born of resistance to authority and opposition to the norm breed unhindered. As for her 2018 show, Bucak returned to an artifact reminiscent of ancient architecture placed beside perishable food. “In incomplete history” (2014) has a smooth bowl carved into a block of marble next to a round loaf of bread.

And further cleverly adapting regional Turkish themes into a visual reconnaissance of traditional objects, she photographed “Promised Land” (2014) of a folded Anatolian carpet and two strikingly evocative eggs. The mental effect transcends reconciliation with verbal or logical thinking. But from a place of distinct first impressions, Bucak’s work “Fall” (2013) merges installation and model photography within a prepared setting outdoors, not inside the artist’s studio as with the other works but stretching from end to end of the frame.

“Fall” shows a redhead standing unsure in a Martian landscape of maroon-hued earth atop a pile of boulders. The erosion surrounding the human figure cuts through the extraterrestrial landscape. From a safe distance, through images of images – viewing scenes manufactured by the mind of a remote artist – the imagination has ample room to feel the first rumbles of an earthquake just beginning to stoke fear in the heart of the unclothed, abstracted interplanetary traveler under a cliff, touching down after a long journey among the stars.

To landscape another world

For its contribution to Art Basel, another Istanbul gallery, Dirimart, included two works by Ayşe Erkmen as part of its group show concept, “Deconstruction,” including Ebru Uygun and duo Özlem Günyol and Mustafa Kunt, among others. Erkmen has approximated the impact of Bucak’s photograph, “Fall,” with her painterly sculpture series, “not the color it is.” The piece “rosa” (2015) creates the ambiance of a hill on Mars, only lightened by a coral hue. Its slabs of hard paint stand up, amassing into an eruption of otherwise two-dimensional expressionism.

The phenomenon of passing over from pictorial flatness to structural verticality is similar to experiencing the world more digitally, prompted by the universal cause to self-isolate in the name of health, so as to prevent the runaway spread of disease. It incites an act of merging multiple forms of perception into a unified order of consciousness, something that Ebru Uygun practiced to create her mixed media work on canvas, “Light of Memory I” (2019), a paper-like flow of golden rivulets that course across the surface exterior and reflect back, gleamingly.

But perhaps the most intriguing piece exhibited by Dirimart, and by those representing the Turkish art world, is a painting by U.S.-based Hayal Pozanti. Her piece, “1993 (The year that Turkey first established a connection to the internet)” (2017), refers to a moment in history when the artist was 10 years old. Born in Istanbul, Pozanti made a name for herself following a prestigious education at Yale University.

The work, “1993 (The year that Turkey first established a connection to the internet)," buzzes with her finesse for integrating printmaking and digital art into the traditional medium of paint. And through semi-abstraction, she quotes the delicious heydays of Abstract Expressionism and Pop Art, when the likes of Keith Haring made the rounds with his voluptuous, graffiti-minded, almost calligraphic style. It is her musing on these visual concerns that reminds everyone with the power of sight that humanity as a whole has long gone down unusual paths, ever onward.