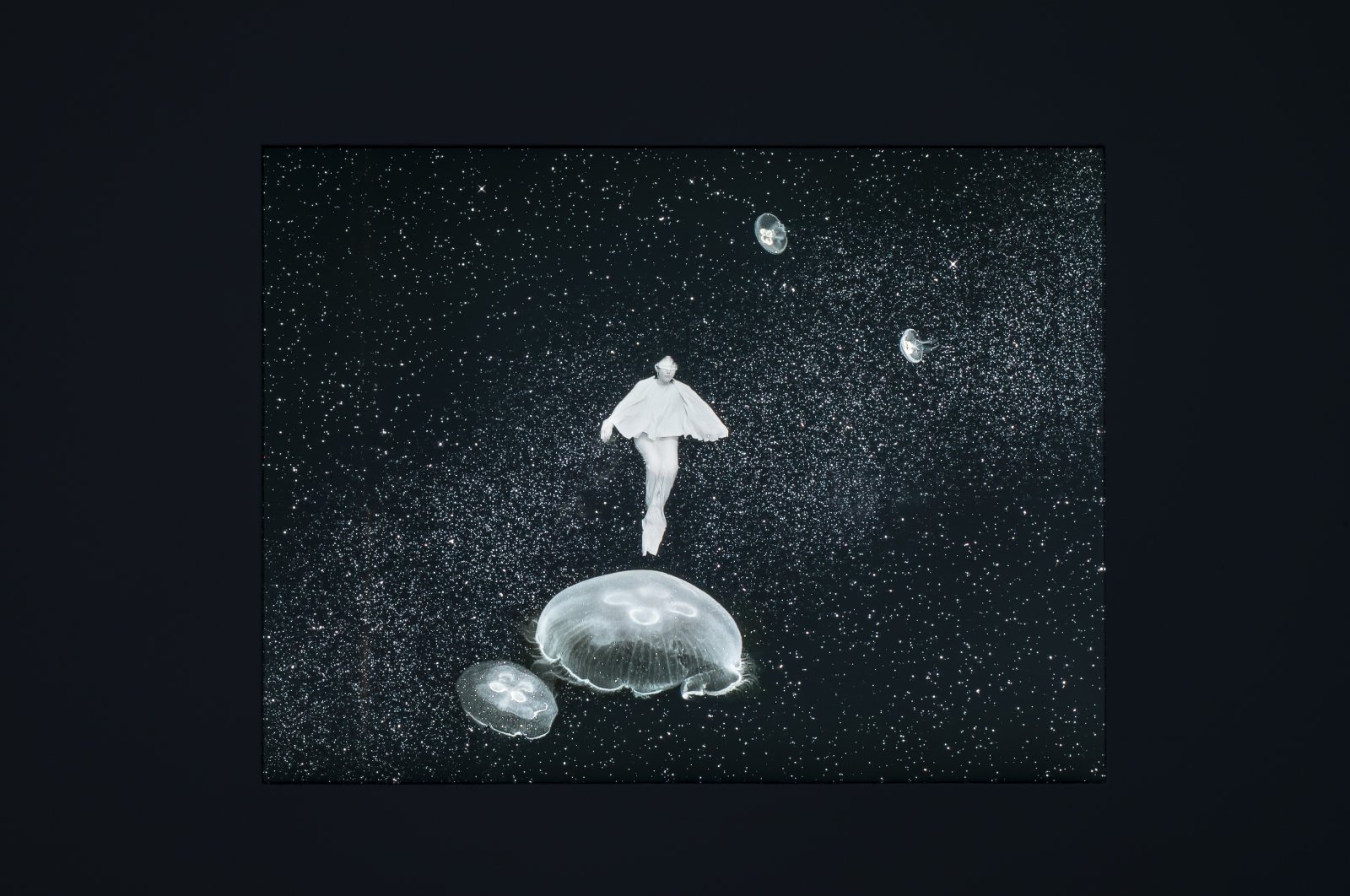 A resident of Paris and Brussels, the works of the former operatic singer have been curated by the cream of Francophone Europe’s art establishment. Her videography and stills are luminous in the Karaköy quarter

For her show at Sanatorium, a distinctly progressive gallery in Istanbul’s art world, Guillaume relayed the mystic beauty of introspection. “Let’s Escape,” the title of the exhibition, is a light touch, a graceful caress of insight into the ethereal realms of thought, night and nature, both earthly and universal. Hers is a voice that retains personality, yet remains poised at a quiet distance, somehow elegantly meek, reticent, like a thought that flits here and there in the mind, evading capture. The role of the artist in that sense could be not necessarily to possess thought, to transform it into a commodified product of experience, but to run away with it, even to oblivion.

On entering the cool space, uniquely suited to screenings, as its interior is obscured behind its long storefront window, the initial video “Four My’s - My Nights” (2014) is displayed, featuring the artist’s pale visage, of milk and starlight, basking in the placid air of a light opacity overlapped by doves in flight, their feathers photographed and rendered negative. The avian emblem of white peace is blackened, crow-like and eyeless. It flaps, at first singly, then increasingly, until her image is overrun, entirely, by an influx of fluttering winged bodies.

It was during her show "4My’s+" at the Royal Museum of Fine Arts of Belgium when Sanatorium decided to curate her works for a special solo exhibition in Istanbul. “Four My’s - My Nights” is very much a whitening aesthetic, softly focused, diminishing into a pleasant fog. Her face contrasts with that of the birds, perhaps symbolic of her mind, or personality, in relation to her body, or that of herself in relation to her thoughts. The sense of clarity is absent, but its absence is replaced by a levity, an unseeable beauty.

About halfway through “Four My’s - My Nights,” Guillaume, self-portrayed in the background of the birds in flight, opens her eyes. Toward the hyperactive, busy conclusion of the 5-minute piece, in which a flock of birds hovers in place over the image of her face, she has opened her eyes wide, and they are clear, flashing bright and piercing through the overwhelming chorus of black wings in motion. For her debut in Turkey, Guillaume has converged the European museum and Istanbul gallery worlds with a delicate harmony.

As an artist thinks

On the opposite side of the panel exhibiting “Four My’s - My Nights” is the accompanying piece “Four My’s - My Thoughts” (2016-2017). The interior of Sanatorium darkens all the more towards the back of the installation for “Let’s Escape” and its cavernous recesses amplify the effect of “Four My’s - My Thoughts,” which conveys a spatial levity that borders on a kind of magical realism. The artist is again part of the work, only full-body, photographed in an aquarium, transposed against a background of outer space.

“Four My’s - My Thoughts” emanates a fluorescent lightness, so as to impart, whether intentionally or not, a quiet sense of humor. The artist is blindfolded, and leaping, in slow-motion off of the backs of jellyfish, floating in a cosmic pool of sense-deprived contemplation. Guillaume enacts a serious playfulness, as the degree of quality in the production of her videos accentuates the heights of frivolity. A jellyfish appears, suddenly, out of the inky mist, and another moment, she emerges from its suction-cup anatomy, materialized of mystery.

Beside her second video work for “Let’s Escape” are six stills, gleaned from “Four My’s - My Thoughts.” They are double-printed on Japanese paper, visibly luminous within walnut-framed, dimmed lightboxes. The starkness of black and white defines the minimal aesthetic of her videography, so as to accentuate the vibrancy of their contrast. Her whites glow, alive with fluid wonder, and her blacks are awe-inspiring chasms, abundances of space, all-embracing. And in her stills, “Thoughts #1 - #2 - #3 - #4 - #7 - #8,” she assumes the shape of a bird.

And to conclude the light touch of “Let’s Escape,” a whisper in the dark of the art world, rightfully timed as the long-anticipated summer approaches following another year eclipsed by the summons of pandemic, a 9-channel video, "Mineralités #1-9” (2020), encloses the show in an ecological meditation on the independence of nature, its surprising potential to catapult its admirers into worlds previously unknown, unseen, unthought. Each screen loops endlessly, yet there are only the slightest of movements in their subjects, which rock-like merely vibrate.

From the bottom left, and going around to the middle, the video's screen points of semi-abstraction, hints of perspective that blend into a grander environmental milieu, although obscured by colorations of photographic limitation. With “Mineralites,” Guillaume has adopted a nonfigurative, while still representational approach to landscape, as a microcosm of anthropocentric myopia, the limits of human perception. Yet, a seer might wonder, if, in fact, Guillaume attempted to portray the way stones might see, unfiltered, including obstructions.

To face the mind

Submerged in surrealist impressions of naturalist videography, earthly and celestial, Guillaume has posed a singular variety of artworks to reflect the mutual sources of influence that exist within the round of relationships between human life, particularly its mental interiority, and that of other forms of life, entangled in seemingly unrelated, or uncommunicable networks. Nature, to Guillaume, perhaps, is not a gross, physical web of bodily acts, but is more like the involuntary expression of thoughts, that spring from the bewildering course of brain activity.

Whether of a dove, jellyfish or mineral, in water, space, on land, Guillaume has traversed surface consciousness with “Let’s Escape,” asking seers if it is even possible to open the windows of personal thought in the language of images alone. But as the art historian and writer Paul Ardenne has written about her works, “Guillaume speaks only of us, humans.” Ardenne refers to Nietzsche to pose art as a tonic in the midst of runaway modernism, in which “art is an idiom that demands and deserves attention.”