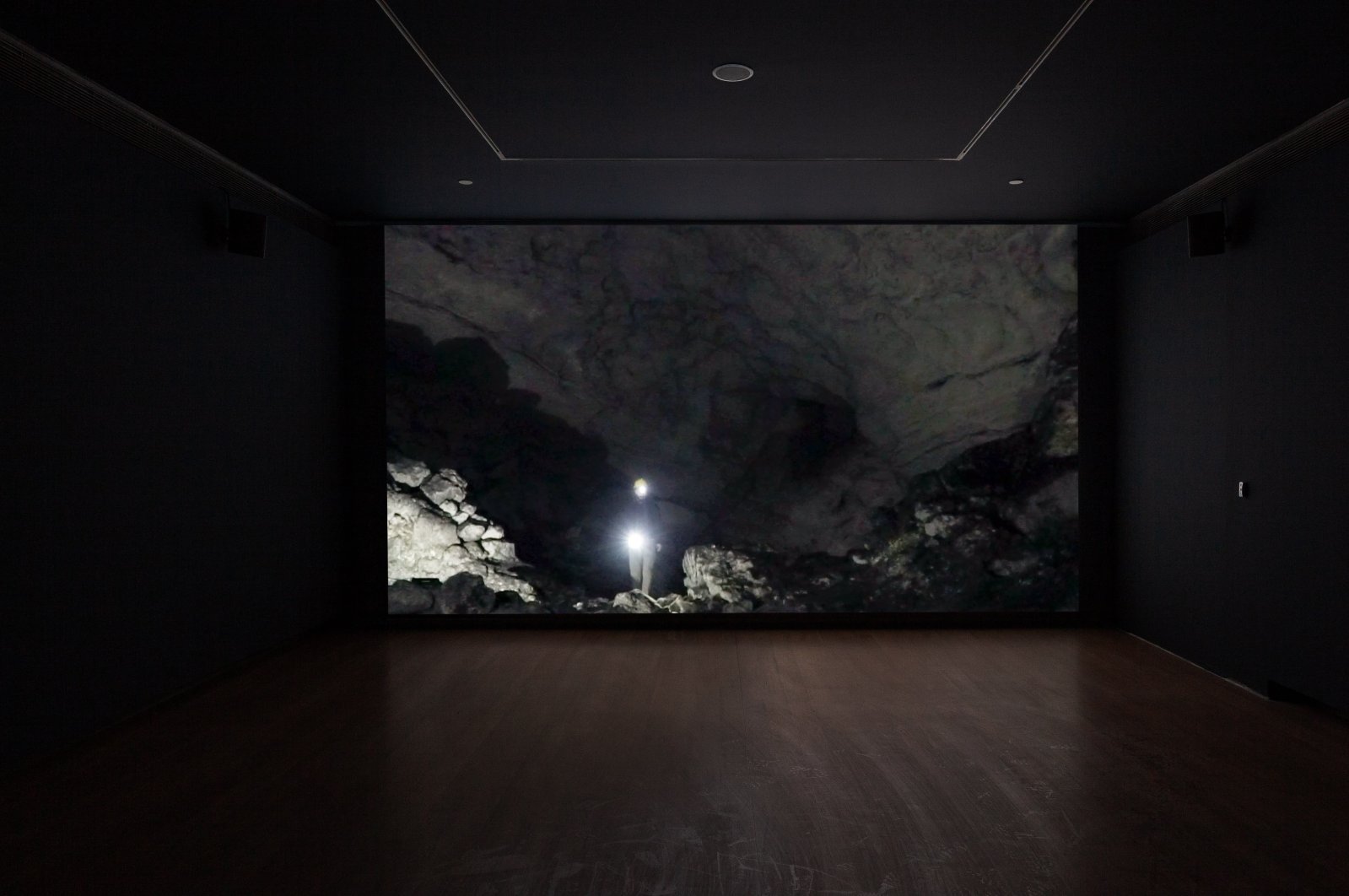 For the first full week of July, as the IKSV Biennial online film series continues, films by artists Işıl Eğrikavuk and Phillip Zach reflect on the ties that bind humanity, such as pandemics and prehistory, from a fragmented contemporary perspective

In 2008, when 11 outbreaks of bird flu, otherwise known as H5N1, spread across five countries from Indonesia to Egypt, the scientific community and political establishment were preparing for the worse. Experts forecast a global pandemic, and the U.S., with its notoriously broken health care system, was on high alert. Then the unexpected happened. The curve flattened, leading to stockpiles of tested vaccines and emergency equipment going unused.

While the World Health Organization (WHO) has reported 445 total deaths from bird flu since it first emerged in 2003, by May, COVID-19 had already claimed over 350,000 lives (and that number has topped well over 500,000 as I write this). The threats posed by bird flu have become the new normal. While the latter contagion had nowhere near the impact on public life of COVID-19, researchers awaited a deadlier blight than the 1918 flu pandemic, which killed an estimated 50 million.

The chasm between the status quo understanding of the disease and the one backed up by medical professionals widens with gaping opacity in the event of worldwide pandemics. Health crises that test the limits of the international medical industry’s capacity stoke superstition and ignorance, which breed fear of others. The seven-minute film, “The Interview,” by Işıl Eğrikavuk addresses these themes in the context of Iraqi-American relations.

Anmaar Abdul-Nabi has a thick Arabic accent. He sometimes stops himself in the middle of his sentences to ask for the right word in English. But in the medical field, he is a wunderkind at 27, answering the desperate call of the U.S. government to save their ailing country, as he is 99% sure of a cure. The 2008 video is based on a real Iraqi doctor named Anmaar Abdul-Nabi who the U.S. invited to help it face the bird flu epidemic of 2003.

When political gets personal

“The Interview” features a pairing of interviews, both of which instill the mood of a tragic mockumentary. On the one hand, local TV reporter Anne Marie Berger speaks with Abdul-Nabi with the deadpan, serious tone of a newscaster on an official broadcast. In the other, the voice of artist Eğrikavuk is heard offscreen rehearsing with Abdul-Nabi in an informal setting for his televised appearance.

In both interviews, “The Interview” shifts the universal issue of pandemic awareness to that of Abdul-Nabi’s immigration story. Abdul-Nabi himself discusses the regional origins of bird flu and its spread from Asia into the Middle East. The doctor is taken aback yet fields all questions with tactful gentility when asked to contextualize his displacement from war-torn Iraq to imperialistic America, whose conflict lingers like an open wound.

Eğrikavuk asks Abdul-Nabi how he feels as an Iraqi immigrant treating a caseload consisting mainly of immigrants from Latin America and the Middle East. His brow furrows like a scientist's might as their personal life is irrelevant to their research. With respect to the shared human vulnerability to infectious diseases, Abdul-Nabi respectfully declines to partake in the politicized distraction.

The country-specific usage of “Spanish flu” to label the 1918 flu pandemic came as journalists were relatively freer to report on the disease in Spain under King Alfonso XIII. This has similarities to the geopolitical fear-mongering that brought about the perception of Asians as spreaders of SARS disease, exacerbated when U.S. President Donald Trump called COVID-19 the “Chinese virus” and inadvertently demonstrated his administration’s diplomatic failings with China.

In other words, what Eğrikavuk has shown in her piece, “The Interview,” with an utterly prescient focus that concerns the present moment, is that it is not enough for America, or the world, to have a cure for a virus. Berger, representing the media spin, stresses how the origins of the doctor called by the U.S. government to save Americans from the epidemic becomes unnecessarily political due to his being an Iraqi immigrant.

An underworld of opportunity

In the dark of a cave, metaphors of the human experience abound and have been the cornerstone of perennial teaching since time immemorial. From the modern psychology of the collective subconscious to the philosophy of Plato, the underground has signified the stark contrast between life’s mysteries and the limits of knowledge. Phillip Zach’s 2019 video “Double Mouthed: Yarımburgaz Cave” is a three-hour-long minimalist epic.

Located on the outskirts of Istanbul, Yarımburgaz Cave is an impressive discovery of unrivaled importance for archaeologists, as its geological formations and human remains span over 1 million years. “Double Mouthed” is a two-part video installation marked by Zach's subtle way of enclosing literary analysis and pop culture into his exploration of prehistory’s overlap with the contemporary, evoking the cognitive dissonance of a graffitied petroglyph.

By appreciating such a broad sample of earthly development, Zach’s art forwards a keen eye for irrational phenomena as a prime mover in the historical process. As with the adage that the first casualty in war is truth, so too when a pandemic arises, reason takes a backseat to allow social cohesion and business, as usual, to go on despite the new primacy of mortality that renders every social interaction potentially deadly.

From the cavernous depths to cityscape panoramas of Istanbul, Zach shifts his focus to professor Mehmet Özdoğan, an archaeologist whose sense of humor is as clear and fresh as his conversational grasp of millennia of a prehistoric civilization and its portrayal inside Yarımburgaz. Premodern artists drew scenes of their ancient world on the cave walls, including details of ships that identify the time period as no earlier than 5,000 years ago.

In a twist of tone, Özdoğan is lightly sarcastic when speaking of his contemporaries, the youngest generation of artists, to add visual evidence of human life to the interior of Yarımburgaz. They have painted over an invaluable source of archeological knowledge and of humanity’s tangible heritage. But smiling, Özdoğan also sees it positively. “It stimulated other talented artists of our time period to continue painting on the walls,” he said.

Zach’s depiction of Yarımburgaz reveals a massive subterranean lair. Oscillating and spinning under the bulbous, smooth stone that takes on amorphous, water-like shapes, Zach fishes in the unlit reaches as stalactites drip slowly in time to the coursing of geological eons. His breath is audible, as we witness a spelunker, lone and wayward, before returning to Earth’s surface. He is tracing the coexistence and merging of eras.

Professor Mihriban Özbaşaran reminisced about the “double-mouthed” nature of joining excavations from 1988 to 1990 at Yarımburgaz after Özdoğan discovered Paleolithic layers beneath a small Byzantine chapel in the upper chamber of the cave. Özbaşaran's professor, Güven Arsebük of Istanbul University, left much of the excavation for the next generation, only to lose all progress made to illegal excavators. Now, nowhere in the cave is as it was.