Conquest of Istanbul: How is it depicted in visual and written media? 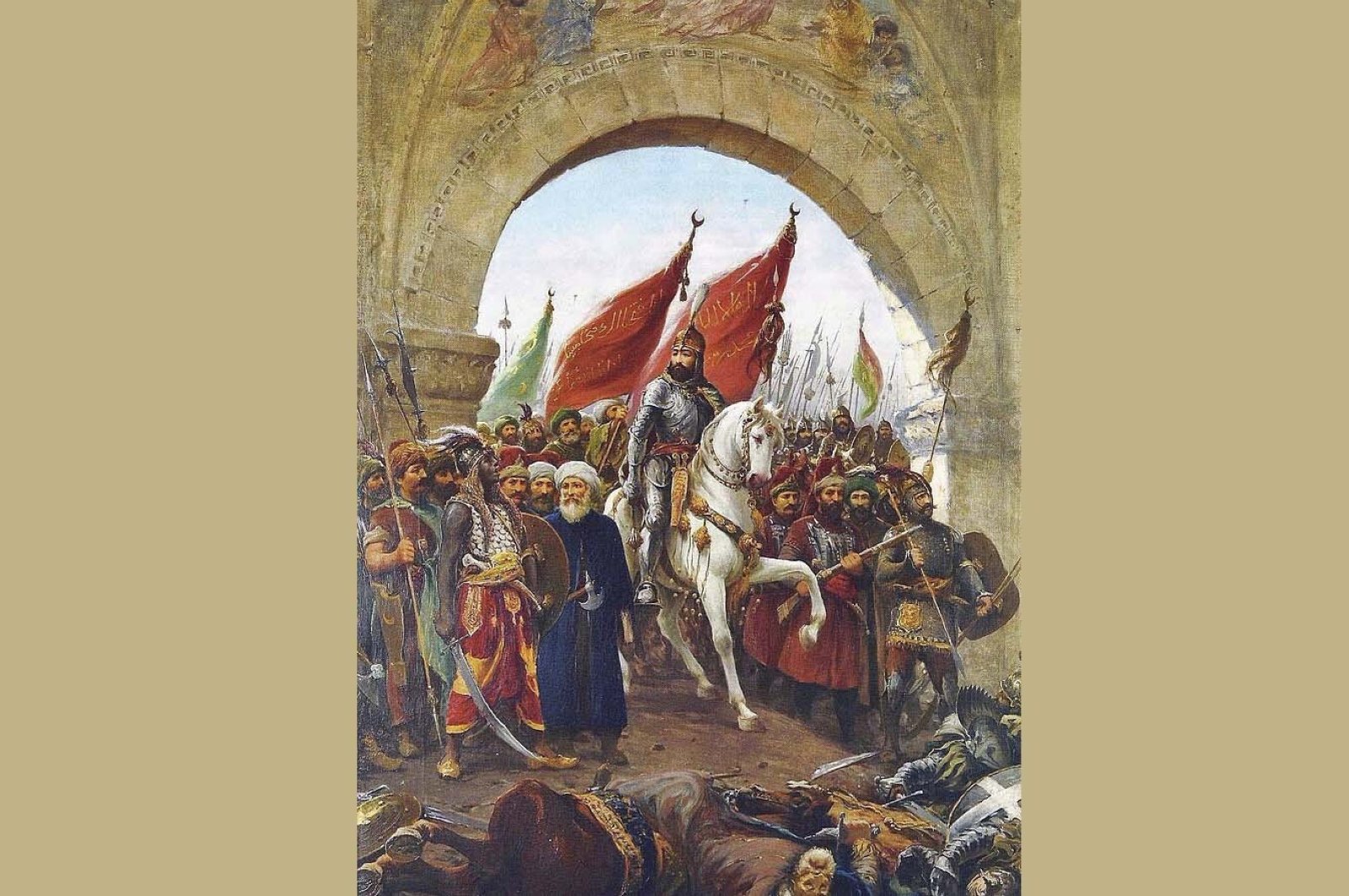 As the anniversary of Istanbul’s Conquest on May 29, 1453, approaches, let’s explore how this event was interpreted through various works of literature, music and cinema

The Conquest of Istanbul in 1453 by the Ottomans is one of the turning points in world history. It has been regarded as the beginning of a new era due to its huge influence, especially on the course of world history, and became an example to the rulers who came in the following centuries.

Even though Europeans embarked on a relentless fight against Sultan Mehmed II, aka Mehmed the Conqueror, with all their forces, they failed to defeat him. French historian and curator, Rene Grousset, sums up the reasons for Mehmed's success as: "The scientific strength and robustness of the Ottomans, the excellence of the monarchic institutions, and the fact that they had an exceptional dynasty pursuing successive conquests provided the Turks with a double advantage and ensured their superiority. The Ottomans revived the holy purpose in the expeditions of the Prophet centuries later."

The conquest of Istanbul was also a source of motivation for the Papacy. It would further strengthen the church authority with the image of "Turkish fear." If this image had not affected Europe to an adequate extent, the Renaissance and reform movements could have started earlier. Indeed, French historian Emile Bourgeois begins his book "Manuel Historique de Politique Etrangére" with the following sentence, "If the French had abandoned the Crusades and condoned the settlement of the Turks in Istanbul, the European medieval age would have ended earlier and the modern ages would have started earlier."

The works based on Sultan Mehmed II and the conquest of Istanbul, celebrating its 567th anniversary on May 29, are mostly within the field of history. However, we see that various works have also been produced in literature, painting, opera, theater and cinema. Let's see if this historical event has been depicted fairly.

The life and personality of the conqueror of Istanbul have always been a subject of inspiration for many artists. For example, Italian painter Fausto Zonaro, who was nominated as the court painter in 1896 in the Ottoman Empire, depicted Sultan Mehmed II’s conquest of Constantinople in some of his paintings commissioned by Sultan Abdülhamid. These paintings of Zonaro became very popular and his salary was increased.

Italian composer Gioachino Rossini’s “Maometto II" (or Maometto secondo), an 1820 opera in two acts, was first staged in 1820. Rossini composed this work at the age of 28. Seen as one of his masterpieces, the opera had a huge impact on Rossini's professional career and the piece was staged for a long time. It returned for the Rossini Opera Festival (ROF), an international music festival held in August every year in Pesaro, Italy, in 1985, after almost 200 years. In 2010, it was staged as the opening opera at the International Istanbul Opera Festival.

The opera centers around the Ottoman-Venetian Wars as Sultan Mehmed II scouts the island of Euboea disguised as a Venetian named, Uberto. Here he meets Anna, the daughter of the governor of Venice, and love blooms between them. However, Anna eventually learns that Uberto is the Ottoman sultan. On the one hand, the opera covers the Siege of Negroponte and shows Anna's story on the other.

When we go from the present to the past, we first encounter "Rise of Empires: Ottoman," the docu-drama series jointly produced by Netflix and Karga Seven Pictures. The series, which aired on Jan. 24, 2020, the conquest of Istanbul is shown throughout six episodes. Written by Kelly McPherson, the historical series encouraged discussions.

The main reason behind the discussions was that some famous historical characters, involved in the war and life of the sultan, were never shown in the series, while some of them were portrayed incorrectly or exaggeratedly. The production, which draws attention with its brilliant setting, intended to catch the attention of a global audience, significantly increased the interest in the life of Sultan Mehmed II.

The Turkish production "Fetih 1453" (The Conquest 1453), which hit the big screen in 2012, centers around Hasan of Ulubat, a legendary figure of the conquest. The movie was a big hit after release. It quickly broke the audience record of 6 million, becoming the most-watched movie of all time in Turkey.

Released in 18 other countries, the film also reached a wider audience internationally and surely caused a stir in Greek media and websites. It was protested by various Christian groups, calling for a boycott. "Turks should be ashamed of the damage they caused to Christians instead of celebrating the Conquest of Istanbul," they said.

It is an undeniable fact that "Fetih 1453" was quite successful in terms of battle scenes and visuals. However, the excessive coverage of a love story prevented many aspects of this historical event from being told. Therefore, over time, the view that the conquest was not fully presented has gained traction. One reason behind the interest in the "Rise of Empires: Ottoman" is that "Fetih 1453" remained unsatisfactory and maintained the gap in the subject.

Although the movie has reached a wider audience in Turkey, it has failed to create the expected effect. It attracted criticism from many historians in Turkey. For example, Yılmaz Kurt, Head of the History Department at Ankara University, said in an interview that the film crew sacrificed facts for marketing concerns.

The film, which was supported by the Turkish Armed Forces with extras, was shot at a time when exaggerated and ultra-nationalist heroic stories had yet to invade the Turkish cinema. For this reason, historical facts were preserved with the precision of a documentary.

The novel to be adapted

"Dünyanın İlk Günü" by Beyazıt Akman is one of the novels that focus on the conquest in Turkish literature. The book was also translated into English as "1453 The Conquest" by Kopernik Publishing. As an academician and a writer, Akman lectured on World Literature and Islam, East-West Relations and the Ottomans and the West at The State University of New York, College at Geneseo, also known as SUNY Geneseo, between 2012 and 2014.

The book, which is constructed from three different perspectives – a janissary in pursuit of your love, an Italian traveler looking for his identity and a young sultan who is about to change the fate of the world. It is the result of some extremely comprehensive work. It manages to provide and explain information through a historical lens while describing the era through these three characters in an objective narrative.

With the successful adaptation of the best-selling novel into a film, it can fill a huge gap of information regarding the Conquest of Istanbul. The author did not make the same mistakes as in "Fetih 1453" and "Rise of Empires: Ottoman," by succeeding in making a fluent narrative without compromising historical information. The author's other books on Ottoman history are also quite popular among the readers, and they continue to be translated into various other languages.

Finnish writer Mika Waltari's "The Dark Angel" is a globally acclaimed novel on the conquest. It is the most remarkable work of the author in terms of both the fiction and subject.

The book, originally named "Johannes Angelos," was translated into Turkish for the first time in 1957 under the title of "İstanbul’un Muhasarası Günlerinin Romanı" (Novel of Istanbul's Conquest Days). Over time, five different translations have been made under the title "The Dark Angel."

The protagonist of the novel, Johannes Angelos, is an adventurer and a traveler who took part in the Crusades. During the Battle of Varna, he is taken prisoner by the Ottomans.

Angelos, who is fluent in French, Latin and Italian, serves Sultan Murad I and then Sultan Mehmed II for seven years. While Sultan Mehmed II finishes the construction of Rumelihisarı and returns to Edirne, Angelos escapes from the Sultan and goes to Constantinople. The actual events in the novel also begin at this point.

Angelos, who, in his own words, is in the last spring of his life in his 40s, falls in love with Anna Notaras when he sees her in the crowd after the Churches Union communion. Anna Notaras is the daughter of Byzantine’s Grand Duke Lukas Notaras.

Anna Notaras and Angelos, who meet several times, love each other passionately. However, Constantinople is besieged. In this environment, both Greeks and Latinos regard Johannes as an "Ottoman spy."

The events in the novel, written in the form of a diary, take place between Dec. 12, 1452, and May 30, 1453. Along with the love between Johannes Angelos and Anna Notoras. Waltari focuses on the pre-conquest state of Istanbul and the depressing atmosphere of the conquest days.

In the entire novel, Waltari, a Christian himself, maintains a non-objective attitude toward the conquest of Istanbul and Sultan Mehmed II, as he explains it from the perspective of a Byzantine hero.