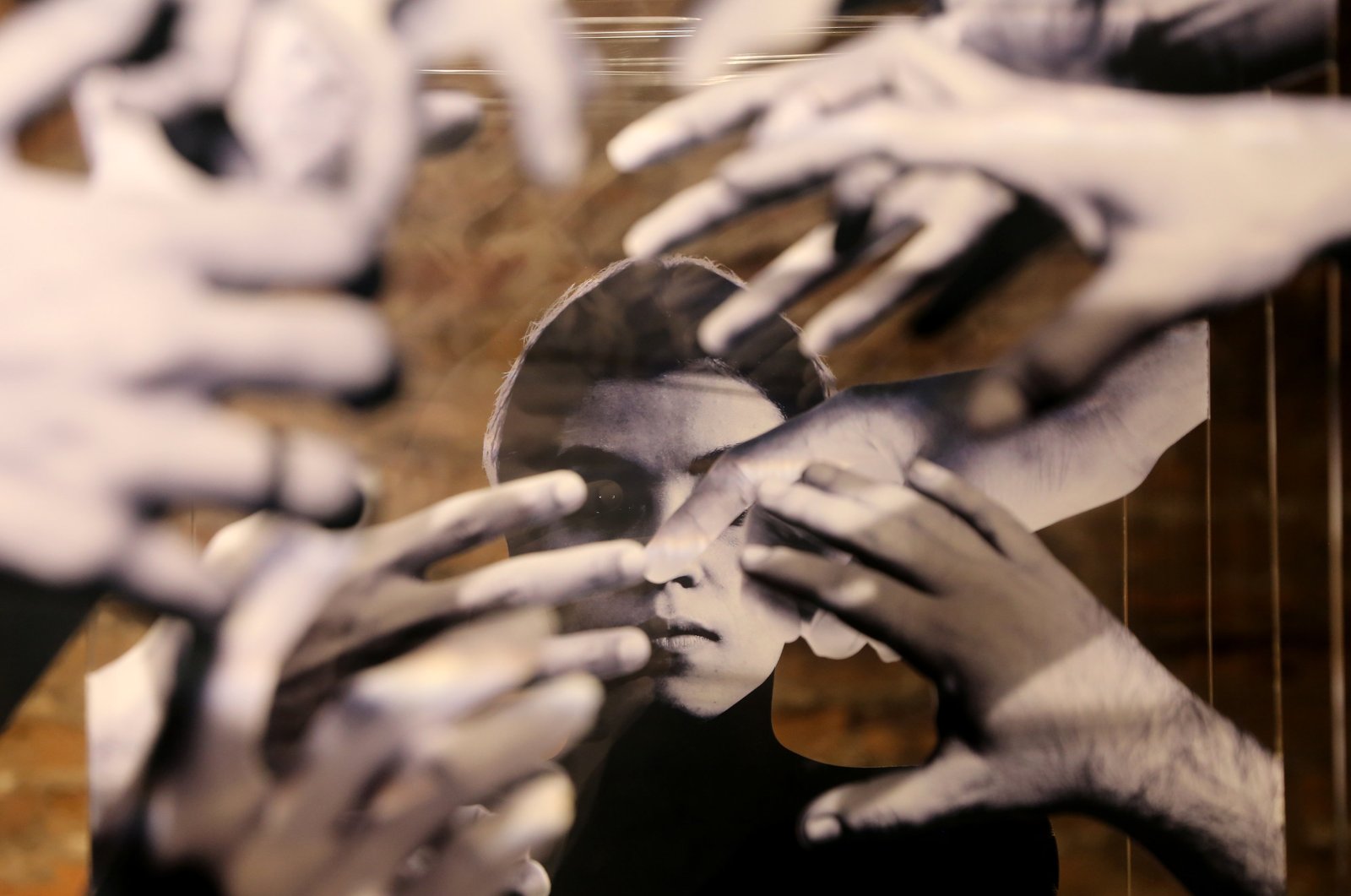 ‘You Are Prettier This Way’ exhibition at Istanbul’s historical landmark Darphane-i Amire explores the period when Turkey enforced a ban on the hijab, inviting the visitor to explore the various strains on women the ban ushered in

The first time I went to Istanbul's Darphane-i Amire for an art exhibition must have been in the early '90s. It was an exhibition on the history of the city and it made me understand, for the first time, what kind of a palimpsest I lived in. The graphics were excellent, the models of Byzantine streets very evocative. It was a revelation to me what you could do with the plastic arts and in many ways initiated me into the world of contemporary art, where if the medium is mastered, the message will flow seamlessly. The latest contemporary art exhibition at Darphane-i Amire, titled “You Are Prettier This Way,” tackles a particular time in Turkish, and indeed Istanbul, history and reminds us of the power various media can have when the artist has engaged with them in-depth.

“You Are Prettier This Way” takes its name from a phrase repeated by university staff and lecturers to the young women who were forced to remove their headscarves in order to enter universities. The ban was at its peak during the '90s and slowly started to be relaxed in the 2010s. A generation of women tried to come to terms with this ban in different ways: Some wore wigs, some left school and got married, some went abroad to study. No hijabi who tried to get an education in that period was left unscathed. It is interesting that for such a far-reaching, prolonged and collective trauma, relatively few works of art have been produced. I put this down to the immediacy of the trauma. Barely 10 years have passed since young women were turned away from schools’ doors. In 2011, Gülnur Güner opened her pioneering exhibition "Kod 333," photographs with women’s faces obscured by what looks like a police sketch.

As you enter the Darphane, the first work you encounter in the yard is “Scar” by Melek Zeynep Bulut, a metal mound composed of strips, crenelated and looking like the mountain symbols in maps. It is high enough for you to go in, it lets in light, and on some of its “steps,” greenery is growing. Bulut confronts the visitor with the difficult question of whether we want to scratch this scar, to maybe let it bleed again. Steeling myself, I enter the main exhibition space and look at one of the first installations. It’s white sheets crumbled and placed in huge net bags, hung from the ceiling. As such, it doesn’t speak to me much. But then I read the title “Diploma” and break into tears. These fragments we have shored against our ruins. These white crumpled pieces of paper that can fit in a fist, over which so much energy, time and heartbreak has been spent. A handful of dust. Diplomas gained at the price of mental health – and not just because of education bans, but all other kinds of disprivilege. This piece by Merve Güçlü and Afra Bedriye Öztürk reminds us of the fragility of all our endeavors and how easily they can be written off.

The emotional experience at the exhibition is indeed very heavy, and I hardly know where to turn. There is piano music coming from the back, and I instinctively make my way toward it. There is a piano, and behind it, a projector is showing the hands of a piano player playing the music. The music is moody, soundtrack-like and soothingly repetitive. There is a sense of disembodiment. The right hand seems to be playing only a few notes, and the left hand is all over the place, playing variations. And then I read the title, "Article 42." I do not know what article it is; it must be one of those that were instrumentalized for the ban. And then I read the artist’s exposition. The right hand symbolizes the ban, and the left the hijabi women. And I’m mesmerized. The right hand sits on the same notes over and over again and the left one approaches it, goes away from it, stumbles on it, sometimes manages to get to the other side of it. I can’t quite register how appropriate a metaphor these piano-playing fingers are for what women experienced during the ban – and how universal this “trying to keep in line” is for many people who are not allowed to express their identities. Rapprochement, appeasement, confrontation. It’s all there.

Slightly dizzy I try to look at other the artworks at the exhibition. I go to Elif Eda’s virtual reality (VR) chamber. VR is an art form that I am very much interested in. This time I approach the work knowing its name “The Thing Between Us.” We are in a white room, as we expect to be. It is in white rooms in cinematic and photographic history that we have been given the truth. The artist sits on a chair, in a very orange scarf and looks at us. Then the voice-over comes. She is not talking about diplomas or educational obstacles, but a traumatic childhood memory, in which she felt cut off from her mother’s affections. As she does so, she peels her scarf layer by layer, as she delves deeper into the story, and with this visual prompt invites us to delve into our memories of being shut out of something we value. Then people start entering her room, looking at her, sizing her up, and before we know it, it is these people’s bodies and not hers that we can see on the screen. Having cowered into my own subconscious, I remember that this is a VR and lift my head, to see the same people sizing me up this time. I want to tell them: “It is not me you’re interested in: Remember that woman in the orange headscarf; it is her! Look at her!” Then they file past me, leave the room. The chair is empty save for the orange scarf. Only the prejudiced gaze remains, the initial object of derision is gone, and now I’m in its place. I feel a bit cheated that the artist has so smoothly disappeared and has left me in her place to deal with the gaze.

The pain of not being accepted as you are is also at the heart of the installation of “Dead Pixel” by Güzin Fuat Tever, an installation of analog photographs where the face of one of the happy-go-lucky girls is always scratched. These are photographs of university life, classes, coffee breaks, picnics, and one of the girls is only a ghostly presence. Sometimes wearing a wig, sometimes hair showing. Never the face. The years spent at university having to pretend to be someone else will sadly be familiar to many. Under “normal” circumstances, it should be where you find your voice, your very face. But for hijabis, it was where they lost face, some giving into pressures, and this collection of photographs expresses that deep feeling of uncanny. It also beautifully gives the lie to the statement: “You are prettier this way.” This undergrad, years later, is letting authorities know she didn’t feel prettier when she had to take off her scarf: She felt she didn’t even have her own face anymore.

Having gone through a maelstrom of emotions with just these four works, I feel drained and spend less time with the others which deserve as much interaction as these. In these pandemic-ridden times, it will be hard to tour the show, so I hope that soon they will be carried over to a digital platform, where people who experienced this period elsewhere in Turkey or indeed have been shut out from society, can easily access these works and it becomes a ready archive for other artists to build on.