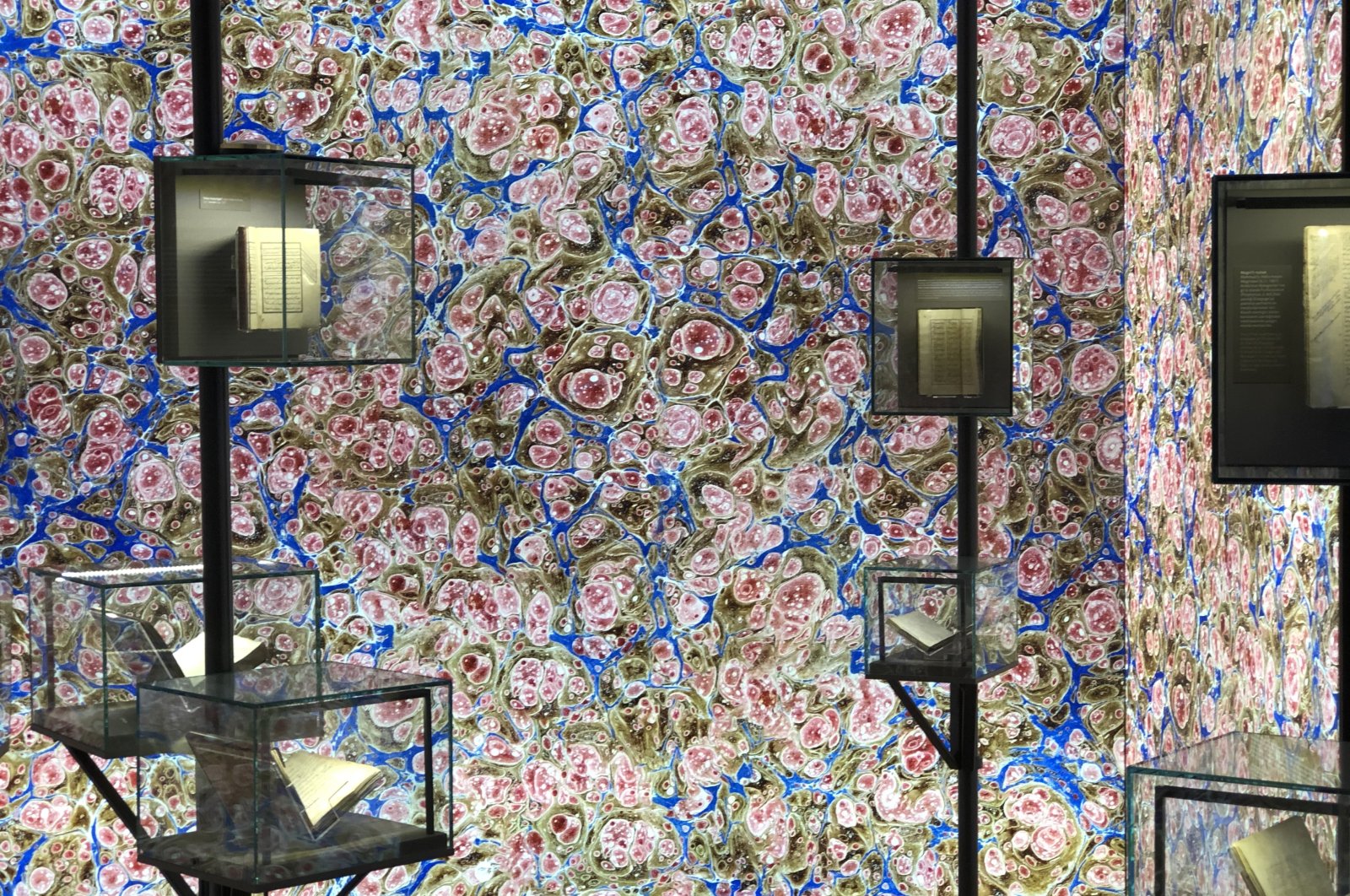 The room with the design of the pinkish-blue marbled paper at the Istanbul Research Institute. (Photo by Matt Hanson)
by Matt Hanson Oct 12, 2020 10:05 am

The current exhibition at the Istanbul Research Institute in Pera, “Memories of Humankind,” displays impressive, comprehensive analyses of Ottoman manuscript illumination and its intellectual and material culture

The writing and publication of books, in all of their multivalent forms, reflect the broader media context out of which they have been produced. The written word is, like music or painting, a medium through which people convey images, tell stories and imprint their cultural milieu toward a social advancement of ideas. From readership to the collection, however, the history of writing is also a tale of sequential obsolescence. Engravings on clay, later ink on leaves and scrolls of parchment, led to paperbacks and now, ebooks.

The ancient practice of inscribing, disseminating and preserving records through the visual symbolization of spoken language, developed to encompass the span of human creativity, beyond tangible accounting and practical communication. Drawing from a vast regional source in which languages merged, in writing and speech, for millennia, the Ottoman Empire came to encircle and absorb the storytelling traditions of Persia, Arabia, the Islamic world and the Turkic origins of its ruling dynasty, increasingly influenced by outsiders from all directions.

In Pera district, the Istanbul Research Institute has mounted a state-of-the-art multimedia exhibition including some rare and invaluable specimens of illuminated manuscript art from the Ottoman Empire. The theoretical focus of the show examines how creative expressions of its bygone civilization came to change. The first rumors of modernization could be said to have surfaced when books began to be printed in mass quantities mechanically following the spread of the movable type, initially invented by Johannes Gutenberg in the 15th century.

The print revolution prompted by Gutenberg essentially coincided with the rise of Ottoman literacy. Yet, on the edges of Europe, Ottoman lands held fast to eastward trends. Books or manuscripts, even those illuminated with stunning artistic embellishment, were to premodern, non-Western readers, like extended conversations. In that way, “Memories of Humankind” has uniquely curated a vision of Ottoman manuscripts as the accumulated thought of their readers.

Of ink and coffee

For many centuries, the streets of Istanbul hummed with literary minds who delighted in the prestige of their words glorified, meticulously, by the painstaking crafts of copyists, binders, frame ruling artists and illuminators. When not working, they might have spent their time, much as people do today, adrift between coffees at a local shop where freewheeling discourse echoed across the din above the bowed heads of some who, with their nose in a book, waited for their moment to raise a point that will change someone’s mind.

With a comparative sensibility, these Ottoman manuscripts can be appreciated in certain ways like that of the paintings in the Chauvet Cave in France, in which prehistoric artists worked collaboratively, and not entirely conscious of their mutual efforts, over the course of tens of thousands of years to create masterpieces of figurative murals. Through both digital renderings and primary specimens, the curation by K. Mehmet Kentel relays countless examples of readers inscribing manuscripts with editorial remarks, opinions and proposals.

Literacy implied the skill of a copyist for educated Ottoman subjects who enjoyed a different degree of freedom than their European counterparts when it came to the production of literary, religious or ephemeral printed material. Unlike the monastic custom of copying texts remote from urban society, particularly that of Istanbul, independent Ottoman scholars were not overshadowed by the monopolization of scribes and freely wrote and expressed themselves alongside the texts they copied.

There is a richness to the textual placards throughout “Memories of Humankind,” together instilling apt regard for the history of the items shown. The verity of the texts is reinforced by the world-class erudition of the Istanbul Research Institute, as well known for its Roman, Byzantine and Republican studies. In lucid layouts, typical illuminated manuscripts from Ottoman times are dissected, highlighting the symbiosis of craft, authorship and reading. Below the model clarifications are carefully hand-picked samples.

While much of Ottoman literature was derived from the religious heritage of Islam, so as to publicize knowledge of the Quran by all means, many writers, especially poets, earned the privilege of seeing their works copied many times over in their lifetime. One such Ottoman bard was the 16th-century poet Baki, also known as the “sultan of poets.” Though low-born, he saw his words carry the spirit of his age to unsurpassed renown, penning such lines as, “All faces gleam for us, the Ottoman world's awe, my dear," translated by A.Z. Foreman.

At the Istanbul Research Institute, a manuscript dated 1588-1589 is attributed to a copyist named Yusuf. The copy, under glass at the entry-floor Pera exhibition hall, is relatively spare, unelaborated with gilded geometries or the fiery floral wisps that have given manuscript art its place in art history, perhaps owing to classical austerity. Another manuscript by historian Mustafa Ali of Gallipoli, who also died the same year as Baki, in 1600, is saturated with the frame ruling art that partitions its text in a peculiarly visual, interactive light.

“Memories of Humankind” is a multimedia venture, not only into manuscripts but also the artful making of its instruments. A pen case, sharpener or writing set box is shown to have all of the glamorous regards for beautification as prepared for the copy of the text, lavishing in carved and bejeweled mother-of-pearl, ivory and ebony holders colored with vibrant dyes. These objects would have inspired readers, as copyists, to venture into the manuscript with a sense of pride, class and honor.

Baki reappears in another volume, copied by Mahmud b. Şeyh Ömer in 1580, accompanied by pages of quotations and corrections by the 20th-century statesman and anthologist Fuad Köprülü, whose work on divan poetry is canonical. In the earlier manuscript, Baki edited the manuscript himself. Others like Köprülü included collector Şevket Rado, who would go around to secondhand booksellers to publish, in serial and book form, 19th-century Ottoman manuscripts, such as the popular travelogue of an ambassador to France.

If it were not for the lack of seating by which to appreciate the manuscripts, or copies, like a bygone reader might, armed with a fancy pen and an intellectual ego to match the author, “Memories of Humankind” is showing printed, visual and textual material enough to last any curious bookworm a day’s worth of wonder. One room flows out from its walls with the design of Ebru, the pinkish-blue marbled paper iconic to the Turkish publishing aesthetic. There are books encased in soft lighting, among them works by Sufis, philosophers and storytellers.