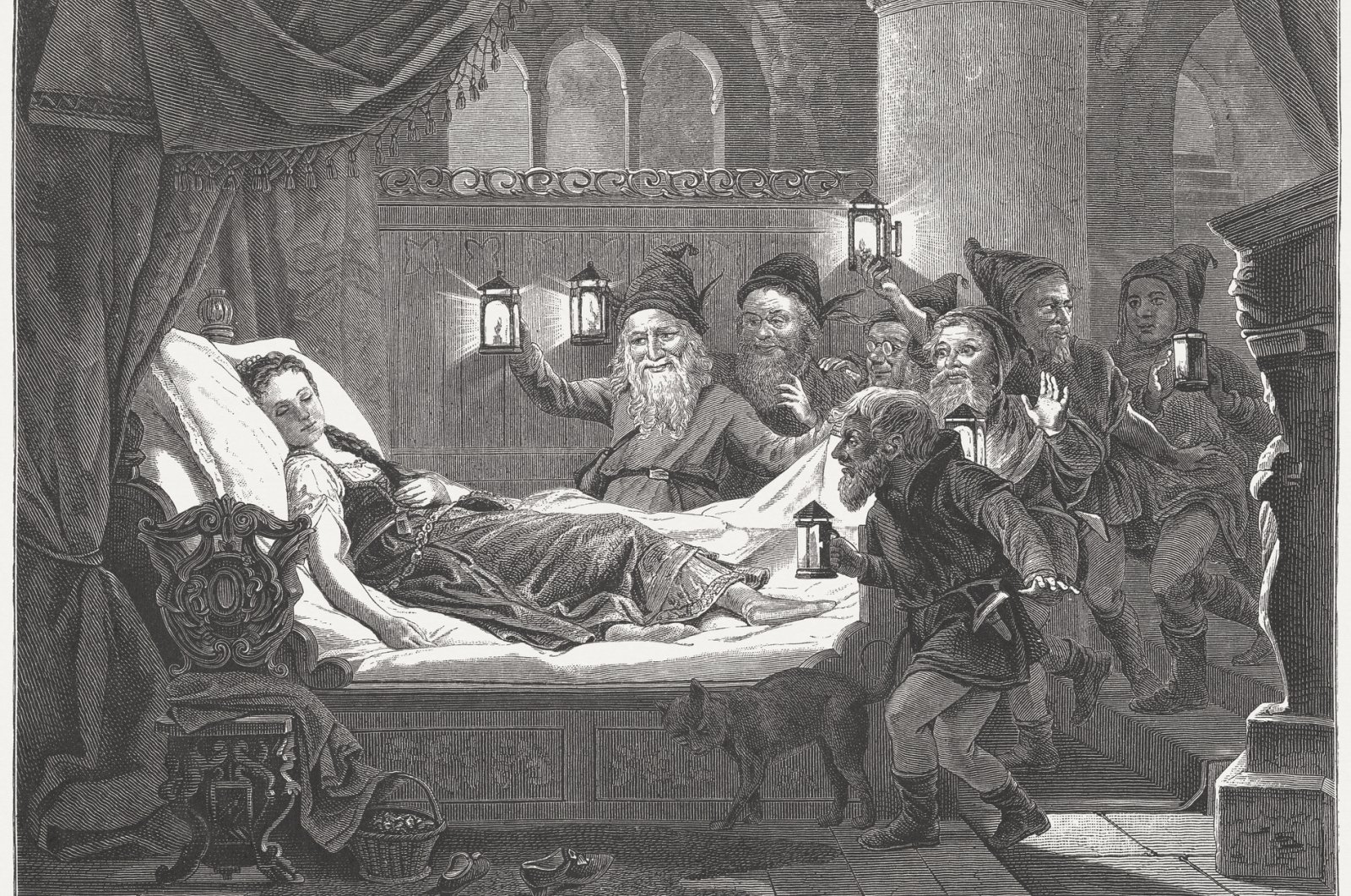 Wood engraving showing a scene from the “Snow White and the Seven Dwarfs” fairy tale by the Brothers Grimm in the “Tales of Children and the Home”, eight stories of which were inspired by “One Thousand and One Nights”. (iStock Photo)
by ALİ TÜFEKÇİ
Oct 21, 2020 1:40 pm

After the misinformation of European travelers and ambassadors on Eastern culture was recognized as such, Orientalists directly examined Eastern works, which led to the improvement of Western literature

The emergence of Orientalism is based on many political, commercial, military, religious, scientific and scholarly factors. The basis of all of them comes from two sources of motivation: colonialism and the scientific goals of academia.

The Western world needed to understand the religious, cultural and social characteristics of the Eastern people in order to dominate them easier as part of colonialism, making in-depth research necessary. However, the most important detail that deepened this scholarly research was the false information conveyed by travelers and ambassadors. It was necessary to correct the wrongs and learn the truth.

While some of this wrong information was deliberate, some of it stemmed from ignorance. For example, the Turquerie movement – the 17th-century European trend of following Turkish fashion – was so popular that Orientalist paintings by artists who had never come to the Ottoman Empire were of interest, and the information provided by travelers who had never traveled to these lands was considered true. Some either generalized what they saw in one place or covered up the truth with exaggerated statements. In a sense, they were taking revenge on the East with these fabricated studies.

Among them was English traveler William Lithgow (1582-1645). He described Muslim dervishes as those who scratched their eyes out while returning from their holy pilgrimage and lived blind in an effort to avoid seeing the evils of the world. However, such a practice is mentioned neither in Sufi books nor in any other religious source.

French traveler Nicolas de Nicolay's extensive travel book is also full of such exaggerated generalizations. Since his book was translated into many languages – English, German and Italian particularly – it became the source of many false facts. For instance, he portrayed some Qalandari dervishes – a marginal group – as “pious Turks,” but the Qalandariyya were corrupt during those years and did not represent general society.

Such misinformation, however, drew reactions among some Europeans. For example, English aristocrat, writer and poet Lady Mary Montagu often complained about the false reflections of women in the Ottoman harem through her letters from travels to the Ottoman Empire as the wife to the then-British ambassador to Turkey Edward Wortley Montagu. Because she knew that travelers of the period were not Muslim and were men, she knew that they did not learn enough information about women in public and the palaces in the Ottoman region. Consequently, one of the things that inspired widespread curiosity was Ottoman harem life in Europe, which resulted in inappropriate depictions of women by these travelers. Their narratives were reflected in Orientalist paintings of exaggerated nude figures. In another example, those who did not tour the Eastern world were not accepted as a member of the Divan Club, a short-lived club that imitated the Ottoman assembly and held intellectual meetings to prevent misinformation about the East.

The first Orientalist researchers in the 17th century also noticed this situation and highlighted the studies of Eastern languages rather than personal narratives in order to obtain more reliable information. Scholars William Bedwell (1561-1632), Edmund Castell (1606-1685) and Edward Pococke (1604-1691) published articles on the importance and necessity of Arabic and Persian in order to conduct serious research.

After the increase of studies on these languages, the translation of texts that are considered Oriental classics began. Thus, Western culture began to feed on many literary, religious and philosophical texts of the East. These literary texts were the source of religious, intellectual and scholarly research, in addition to the aesthetic, poetic and romantic aspects that they contained. “One Thousand and One Nights,” a collection of Middle Eastern folk tales compiled in Arabic, was the most obvious example of this effect.

In France, where these tales were first published, French writer Voltaire (1694-1778) was fascinated by them. They affected almost all of the writer's work, who was regarded as the forerunner of the French Revolution. He said that he could write his stories only after reading “One Thousand and One Nights” 14 times.

Moreover, Jacob Grimm (1785-1863) and Wilhelm Grimm (1786-1856), known as the Brothers Grimm, confessed to making use of “One Thousand and One Nights” when writing eight stories in the series “Kinder-und Hausmärchen” (“Tales of Children and the Home”).

Famous French novelist Marie-Henri Beyle (1783-1842), better known by his pen name Stendhal, said that one of the two books that he could not stop reading with joy was “One Thousand and One Nights.” For him, the other was “Don Quixote” by Spanish writer Miguel de Cervantes (1547-1616). Besides, French judge and man of letters Montesquieu (1689-1755) got the main idea of his view defending the fact that laws and social institutions differ by time, countries and climates from “One Thousand and One Nights.”

In the 18th century, Anglo-Welsh philologist Sir William Jones (1746-1794) was a pioneering figure in understanding and analyzing the Eastern world as the head of Orientalist studies. He published and promoted classic works such as the popular Eastern love story "Layla and Majnun." He made attributions to figures who produced works in the Persian language particularly, such as poets Hafez-e Shirazi, Abd al-Rahman Jami, Ibn Arabi and Sufi philosopher Mevlana Jalaluddin Rumi. He also paved the way for many publishing activities to understand these scholars’ works.

Jones’ works, especially his literary translations, allowed the symbols and allegories of Sufi literature to find their way into the English language. The most important aspect of him is that he combined the individual Orientalist works done before him under an organized structure. Thus, research and translation activities were now progressing in a more systematic way.

All this has given the West a kind of depth beyond the superficial narratives of travelers. They inspired many works, theater, cinema, painting and other branches of art that shaped world literature. They left a stronger influence on Romantic artists in particular. Thus, they enabled Europe to be dominant not only in the political or commercial area but also in culture and arts.