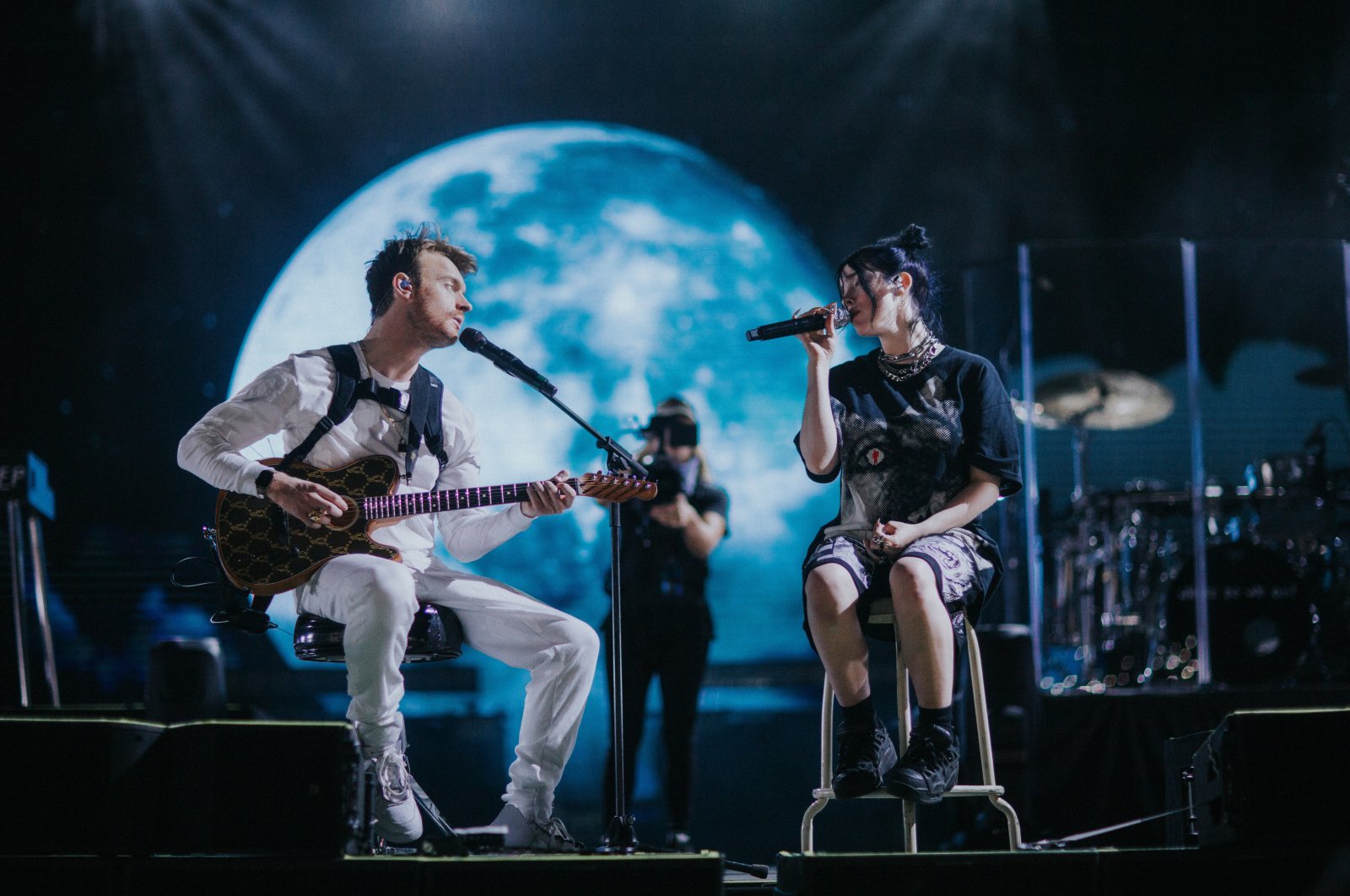 This image released by Apple TV shows Billie Eilish (R) and her brother Finneas O’Connell in a scene from "Billie Eilish: The World’s A Little Blurry." (AP Photo)
by ASSOCIATED PRESS Feb 26, 2021 2:15 pm

Director R.J. Cutler's two-hour and 20-minute documentary on Billie Eilish plunges into the life of the famous singer-songwriter, giving glimpses into her home, concerts and Tourettes syndrome. The documentary even explores her brother Finneas Baird O'Connell's bedroom where the pair famously write all their songs. Straying from the usual biopic, “Billie Eilish: The World’s a Little Blurry” is raw.

The production is filled with music – over 20 of her songs are played over the course of the film, including live performances, like her extraordinary Coachella showing in 2019. Some are shown in full. It is also very, very long. Cutler, who also did “The September Issue” and “Belushi,” cited seminal rock docs “Gimme Shelter” and “Don't Look Back” as inspiration.

Eilish’s ascent is extraordinary and yet she is still in the early part of her artistic and actual life. Fans will certainly disagree, as is their right, but it is an enormous amount of unfiltered space to give to an artist who is still getting started. There's no right or wrong way to make a documentary like this, but for the Eilish curious and not the Eilish die-hards, it's an initiation by fire without any context.

Clearly, someone in Eilish’s camp had an eye toward legacy when they invited Cutler to her family home to see if he wanted to follow the then-16-year-old during her breakout year, during which she and her brother Finneas wrote, recorded and released her debut album “When We All Fall Asleep, Where Do We Go?,” with which they bagged awards at the 2020 Grammy Awards.

Eilish is funny and sullen and charismatic and moody, just as you’d want and expect a teenage artist to be. She gets dreamy and protective of her followers, saying “they’re not my fans, they’re like part of me” and complains that for her, writing songs is “torture.” And she breaks the fourth wall occasionally (she’d told Cutler that she wanted it to be like “The Office”) to let the audience knows that she knows they’re there.

Her brother is the driving force a lot of the productivity in their cozy family home in the Highland Park neighborhood of Los Angeles (he’s since moved out). Their parents homeschooled them and music was always part of their life, with mom, Maggie Baird, teaching them how to write songs and dad, Patrick O’Connell, teaching instruments.

It is interesting to see her and Finneas riff about lyrics and test things out – he has anxiety about having to produce a hit and she couldn’t care less – and the juxtaposition of her glamorous appearances and performances with the modest normalcy of their home life.

There are some terrific moments that Cutler caught out on the road: In one instance, she meets Katy Perry who introduces Eilish to her fiance – “a big fan.” It’s only later that Eilish realizes that was Orlando Bloom. Her brother reminds her he is “Will Turner from the ‘Pirates of the Caribbean' movies.” She wants a redo. “I thought he was just some dude,” she says.

Another is her first meeting with Justin Bieber. She talks about her longstanding obsession in an interview, he gets in touch three days before her album release about wanting to collaborate. (She tells her manager that “he could ask me to kill my dog and I would.”) Then at Coachella, he appears as she’s greeting a hoard of her fans. She freezes and becomes a fan herself. Later she’ll sob over a heartfelt message he sends her.

And there are some incredibly vulnerable moments too, showing the performer exhausted and annoyed. Eilish remains as unique and enigmatic as she seems from a distance, but also is presented very much like a normal Los Angeles teenager, getting her driver's license, dreaming of a matte black Dodge Challenger and texting with a largely absent boyfriend.

Fans will eat up every morsel of this documentary and wish for more. Newcomers, however, might benefit from watching it in installments, which is one of the benefits of the film debuting on Apple TV+. There’s even an intermission to help take the guesswork out of where to hit pause.

This does not come across as a vanity project that’s been intensely controlled by the star or the machinery around her, either. It’s refreshing. It's also probably one of the last times we’ll all be invited into her life in this way.