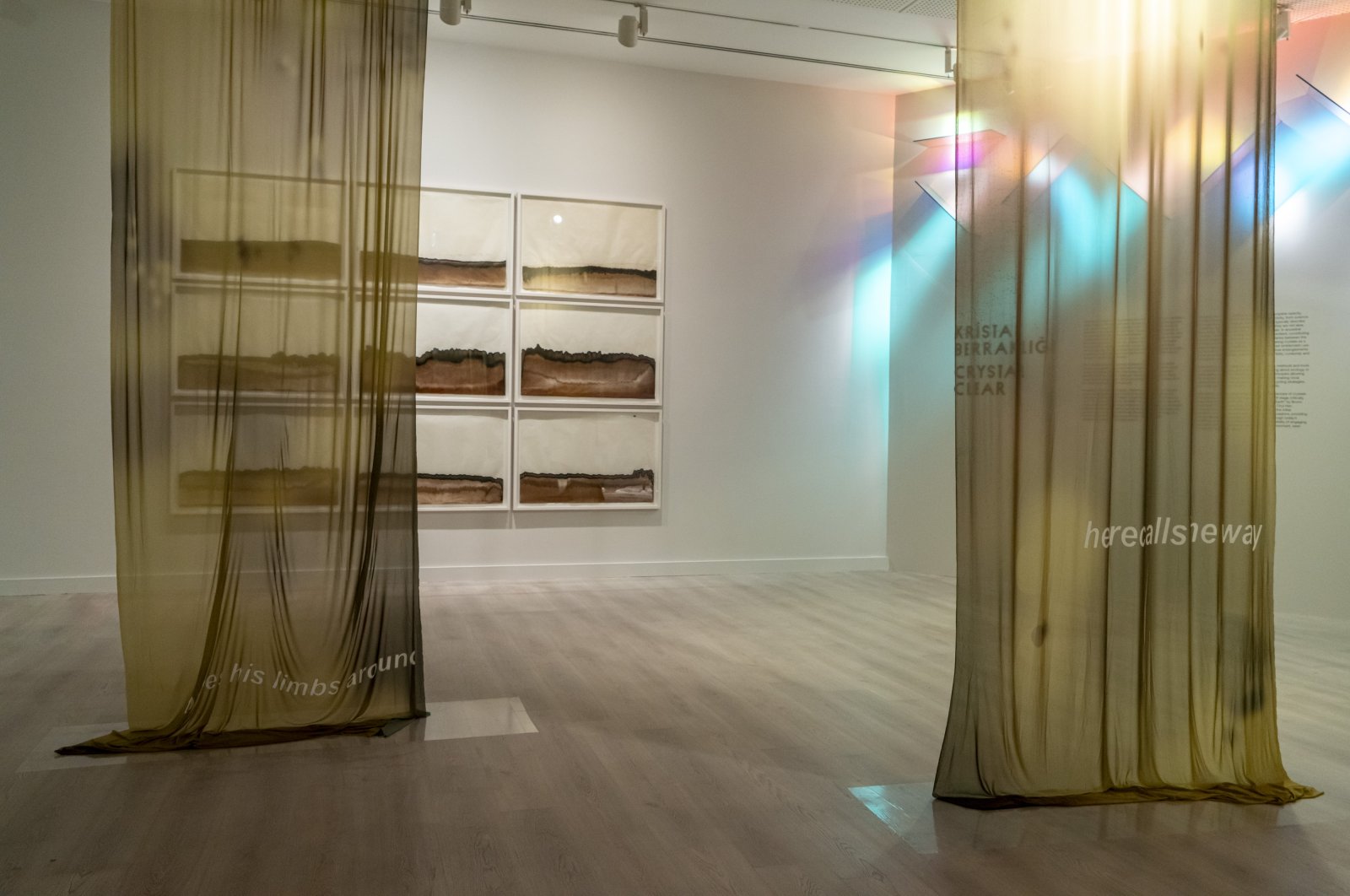 ‘Crystal Clear’ is a broad exploration of how we orient the world trapped between ever-more-complex dichotomies, gleaned through the alluring but fragmented crystal lens

Animate and inanimate, organic and inorganic, transparent and opaque: By their very nature, crystals constitute a physical manifestation of the juxtapositions artists are endlessly fond of exploring.

It thus follows that the Pera Museum’s “Crystal Clear” exhibition is both long overdue and – true to theme – simultaneously, right on time.

The showcase, which features the works of 21 Turkish and international artists, originally set out to explore the opposing binaries that crystals represent and to investigate how the pressure vital to their formation chimes with our own growth.

However, with the onset of 2020 and the unique pressure at once plied onto daily existence, issues such as that of the ersatz proximity offered by digital communications were at once thrown into the mix, making for one of the year’s most touchingly pertinent real-life exhibits.

The all-pervasive role played by dimension and proximity in this series is clear upon arrival on the third floor of the Pera. One first remarks on the massive flows of poetry-inscribed gauze hanging from the ceilings, obscuring the title text of the exhibit itself, which one is nudged toward by a draping of thicker fabrics from another piece flanking the side.

The former marks Paul Maheke’s “The River Asked for a Kiss” and deals with the suicide of a Gambian immigrant, who jumped from Venice’s Rialto Bridge. The reaction of the crowd, who did little more than document the event on their cellphones, shocked the artist with its warped dissonance.

Adrien Vescovi, meanwhile, obscures the visitor’s initial view of the true expanse of the exhibit with a thick layer of earthen, sewn-together blocks of color, cuts of which form his “Book of Alchemy.”

One of the principles first laid down by these mystical practitioners of science and other magic is that all objects can be melted down if treated to enough pressure. It is only fitting, then, that one is from here, led to Güneş Terkol’s own binding, which blends together the molten themes of warped mental distance and physical proximity.

Terkol’s “Dictionary of Distance” takes a direct look at some of the mental strain brought about over the last year, using 21 hanging pages of gauze to depict scenes of masks, mental strain, monotony and the veiled transparency of individuals at once hidden behind closed doors and connected for all to see.

This theme is given a wonderful boost presented alongside Berkay Tuncay’s “Poems from Relaxation Videos,” which takes the most common phrases used by YouTube’s endless supply of relaxation experts, weaving them together with verses scrawled in CAPTCHA style. The layers of irony in the poems scrawled on the walls below Terkol’s dictionary are too many to list – but the source of anxiety implied by the action of having to prove we are “not a robot” heavily underscores another theme that threads throughout this exhibit.

Byung-Chul Han is a philosopher whose prolific works have only relatively recently come to prominence – possibly due to the staggering pertinence of his observation, vis-a-vis bidirectional digital communication, that: “Lack of distance is not proximity. If anything, it destroys it. Proximity is rich in space, whereas distancelessness annihilates space.”

This is exactly how one self-isolating, or holed-up working from home, can feel – at once alone and connected, near and far from loved ones. But Han’s writings also point to an even grimmer development accelerated by the pandemic in the biopolitical sphere.

Facial recognition technology has been redeveloped to recognize individuals even beneath their masks as part of the campaign to trace virus carriers. This unprecedented level of invasiveness of the state over the individual is contrasted by the drive to encourage social (read: “physical”) distance between individuals. Technological developments such as these seem to occur and spread unguided and sprawling, not unlike the virus they are ostensibly magicked up to fight.

In “Crystal Clear,” this is best explored in Yazan Khalili’s “Medusa: Don’t be a stranger.” The video installation sees layers of battered cellphones pointed toward a mask of Medusa being touched softly by human hands. Other screens show footage touring a museum of ancient myths.

The addition of the mythic Gorgon, whose snaking locks could turn one to stone at a glance, is suggestive of the steady and snakish encroachment of tech in our lives and the removal of the very notion of anonymity.

Iz Öztat’s short video installation brings all these threads together in a most comprehensive way. Her work takes the word associations we can all make with crystals – namely: “dense, perfect, pure, rigid, transparent, opaque” and remarks on how such terms have all been used to describe state systems – which in our current age, seem to grow inward and outward in density and scope.

This density is shown most starkly by the pitch-black circle that centers Minia Biabiary’s psychogeographical work “Hearing Water,” representing silence in the face of her native island’s colonialist past – the effect of history almost too heavy to challenge like the blanket of the security state that blankets us all.

Yet, in the face of the powers that be, hope springs eternal through the clamps of iron fencing, glass and heavy frames that seal Gaelle Choisne’s “Paintings of Disavowal,” which highlights the development of voodoo under slavery as a form of resistance, a forging of new bonds below the radar of the powers that be.

“Crystal Clear” is both broad enough to allow thought-trains and flights of fancy to flourish as they will while offering nuanced but informed nudges in the direction of philosophical intrigues pertinent to the day – all with the vivid color, texture and life needed to ensure a sensorially nourishing visit. The exhibit can be seen until March 7.