How accurate are estimations on original portrait of Mehmed the Conqueror? 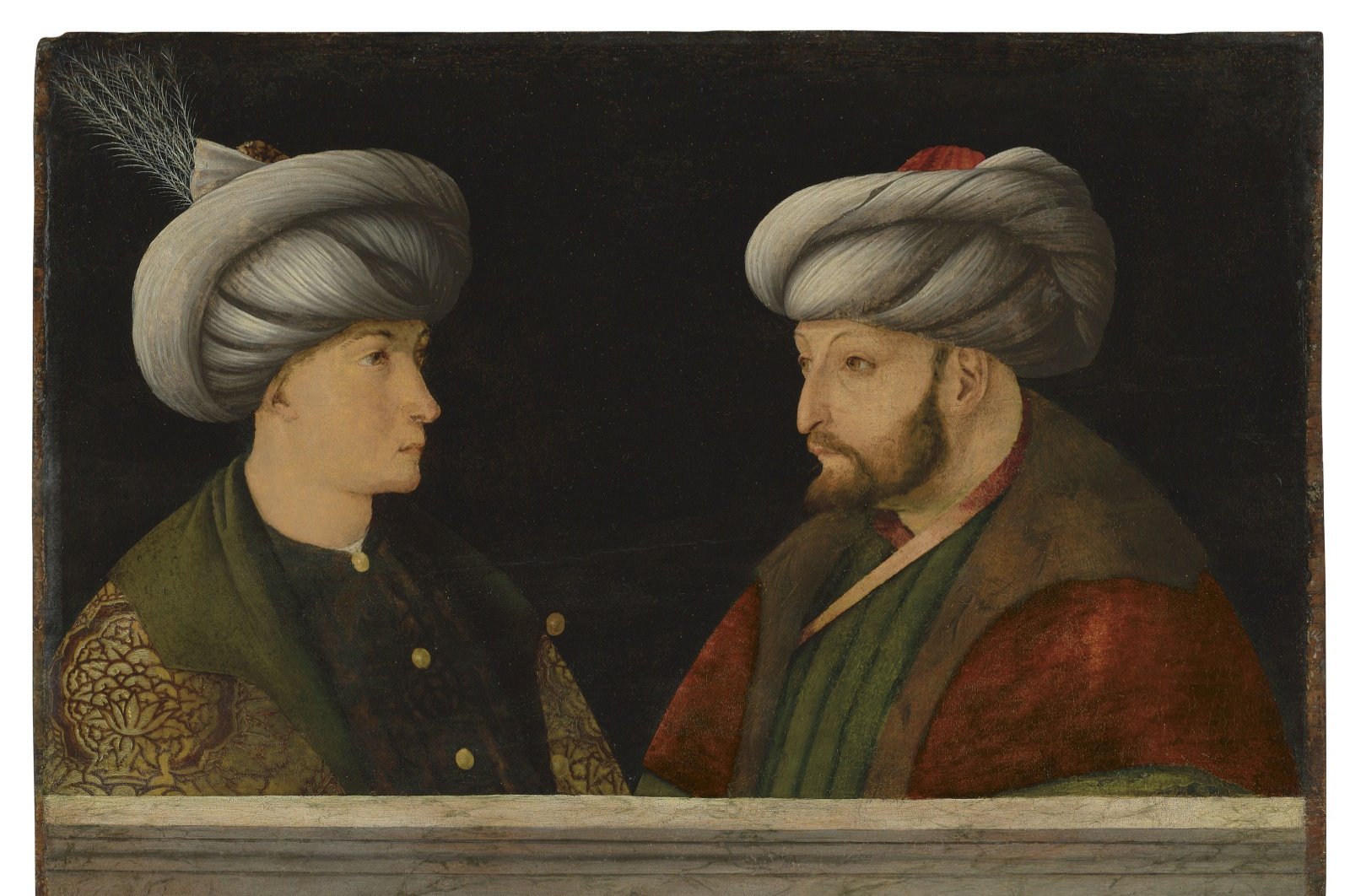 Turkey's commercial capital Istanbul bought a portrait of Sultan Mehmed II recently. Was it drawn by Gentile Bellini? Who is the other person depicted in it?

Most of the paintings and medals ordered by Ottoman Sultan Mehmed II, aka Mehmed the Conqueror, did not survive until the present day. One of his portraits whose painter is thought to be Italian painter Gentile Bellini recently entered the spotlight when the Istanbul Metropolitan Municipality (IBB) bought it for 770,000 pounds ($955,000) at an auction held by London's world-famous auction house, Christie's. It was the only portrait of Mehmed II with another person near him. It is said that the young person in the painting is Mehmed II’s younger son Cem Sultan. However, this claim is based on a groundless prediction.

Sultan Mehmed II invited many painters, sculptors, artists and scientists from Europe to the Ottoman palace during his reign (1451-1481). Maybe, the most famous one among these figures was Bellini, who was in the palace between 1479 and 1481 and made various medals and portraits of the sultan. In the last two years of Mehmed II's reign, a significant number of Europeans had a workshop in Istanbul. However, it is not clear how many artists came from Europe. Bellini, Costanzo da Ferrara and Bertoldo di Giovanni are the foreign artists whose works we still have. Besides, Franz Babinger, Louis Thuasne, Nurullah Berk, Semavi Eyice and Ahmed Refik Altınay are the ones who searched for Bellini’s works relating to Turkey.

Mehmed II wanted to have a portrait of himself by bringing a painter from Italy since 1461, but the war that started with Venice prevented this from happening. This war, which broke out in 1463, ended after 16 years with the victory of the Ottoman State in 1479. On Jan. 25, 1479, a treaty was signed between the two states. A Jew sent by Mehmed II as a semi-official ambassador arrived in Venice on Aug. 1 in the same year. The ambassador invited the Venetian Doge (Duke) Giovanni Mocenigo to the circumcision feast of the grandchildren of the Sultan Mehmed II and reported a request from him. He asked the Venetian doge to send a master painter, a sculptor and a bronze caster to his palace. In the previous years, Rimini ruler Sigismondo Pandolfo Malatesta sent medalist Matteo di Pasti to the sultan while Alfons of Aragon, the King of Naples, sent medalist Constanzo di Ferrera to him.

Mocenigo gave importance to the sultan’s request as a friendship was established between the two states with the treaty. The situation was discussed in the senate. Bellini, the master painter of the city who was fixing the murals of the Great Meeting Hall in the Mocenigo’s Palace at that time, was chosen to serve the sultan.

After the death of Mehmed II, his son Bayezid II sold these paintings in the markets. Therefore, we do not know how many paintings and medals Bellini made. Only the portraits of Sultan Mehmed, a medal and seven drawings left from the works that Bellini made in Istanbul for about 16 months. When Bellini returned to his country, he was now called "Il Turco" (The Turk) and used motifs from the Orient in his works.

Bellini’s famous portrait of Mehmed with his aquiline nose, which is known by almost everyone, was completed on Nov. 25, 1480. The portrait fell into the hands of a Venetian merchant in Istanbul’s Galata town and was taken to Venice. It was purchased by Henry Layard, who served as the English embassy to Istanbul between 1877 and 1880 and plundered Nineveh, the ancient Assyrian city of Upper Mesopotamia, located on the outskirts of Mosul in modern-day northern Iraq, with his expeditions. The ambassador's wife donated the painting to the National Gallery in London in 1917, 23 years after her husband's death.

A second portrait of the sultan by Bellini or his team was found in 1933. The portrait, which was bought by a Russian merchant in Russia and sold to an American collector in Paris, is quite small. It is believed that this painting was made later, not when the artist and his team were in Istanbul.

Swiss Orientalist Rudolf Tschudi, who studied “Asafname,” a booklet written by Ottoman Grand Vizier Lütfi Pasha about Ottoman state organization, as his doctoral thesis, found a third portrait in a private collection in Basel in 1959. Franz Babinger, who is famous for his research on Mehmed II, learned about the situation from Tschudi. He examined the issue, but he could not fully solve it.

In the painting purchased recently by IBB, Mehmed the Conqueror and a young man in his twenties are seen looking at each other. On the wooden slab behind the painting, there is the sign "Maometto Secondo i suo Figlio," which means “Mehmed II and His Son,” as well as the name of Bellini. We do not know when this was written. Whether or not the painting was made by Bellini has not been exactly determined until now. Nor has the identity of the person opposite the sultan been detected.

In this regard, various comments pointed out that the painting may be featuring the youth of Mehmed the Conqueror or the other figure may be one of his sons, Şehzade Mustafa or Cem. However, Şehzade Mustafa, one of the very beloved sons of Mehmed II, died in 1474, while Şehzade Bayezid and Şehzade Cem were serving as sanjak bey (district commander) in Amasya and Konya, respectively. In addition, Şehzade Bayezid was 32 years old. The claim that the person opposite Mehmed II was Cem Sultan is frivolous and is not based on any concrete information. This is purely a guess.

It is claimed that Mehmed II regarded Cem Sultan as the crown prince. The estimation that the person in the painting may be Cem Sultan is based on this idea. Due to the use of Cem Sultan's nicknames in the “Fatih Kanunnamesi” (Mehmed the Conqueror’s Codes of Law), the prince is considered the crown prince. However, the fact that Grand Vizier Karamani Mehmed Pasha, who wrote the codes of law, might have preferred to use these nicknames because he was a supporter of Cem Sultan is not taken into consideration. There is no concrete indication that Mehmed II considered Cem as the crown prince, and such a position was contrary to the idea of the Ottoman succession system in the 15th and 16th centuries.

The allegation that the young man is Mehmed the Conqueror himself turns out to be incoherent when compared to the portrait of the sultan. This is because the young man in the painting does not have an aquiline nose as opposed to that of Mehmed II. Babinger suggests that the person in the painting may have been Ishak Bey Kraloğlu (Sigismund Tomasevic), the son of the King of Bosnia and Herzegovina, who liked Mehmed II’s conversations. However, that is also just a guess.

Ishak Bey, son of King Stephen Thomas of Bosnia, was the last member of the Kotromanic dynasty. When his father died in 1461, his half-brother Stephen Tomasevic succeded to the Bosnian throne. During the Ottomans’ conquest of Bosnia in May 1463, Stephen was killed, while Tomasevic was captured in Zvecaj, near Jajce in Bosnia, along with his sister. His mother Katerina, who managed to escape, left her husband's silver sword in Dubrovnik and ordered that it shall be given to her son if he was freed from captivity. She tried to ransom her son, but she went away empty-handed. Tomasevic converted to Islam and was named Ishak and was now in the immediate circle of Mehmed the Conqueror. During the Battle of Otlukbeli in 1473, he had a conversation and meal with Mehmed II. His uncle was Hersekzade Ahmed Pasha, who had previously been a Muslim and served in senior positions. Ishak served in company with Pasha and his promotion continued during the reign of Bayezid II, the son of Mehmed the Conqueror. He was captured during the Ottoman-Mamluk War. Freed from captivity, he was put on trial for leaving the battlefield early and acquitted. The most recent information about him is his participation in the Battle of Krbava Field on Sept. 9, 1493, in which the Ottoman army defeated the Croats.