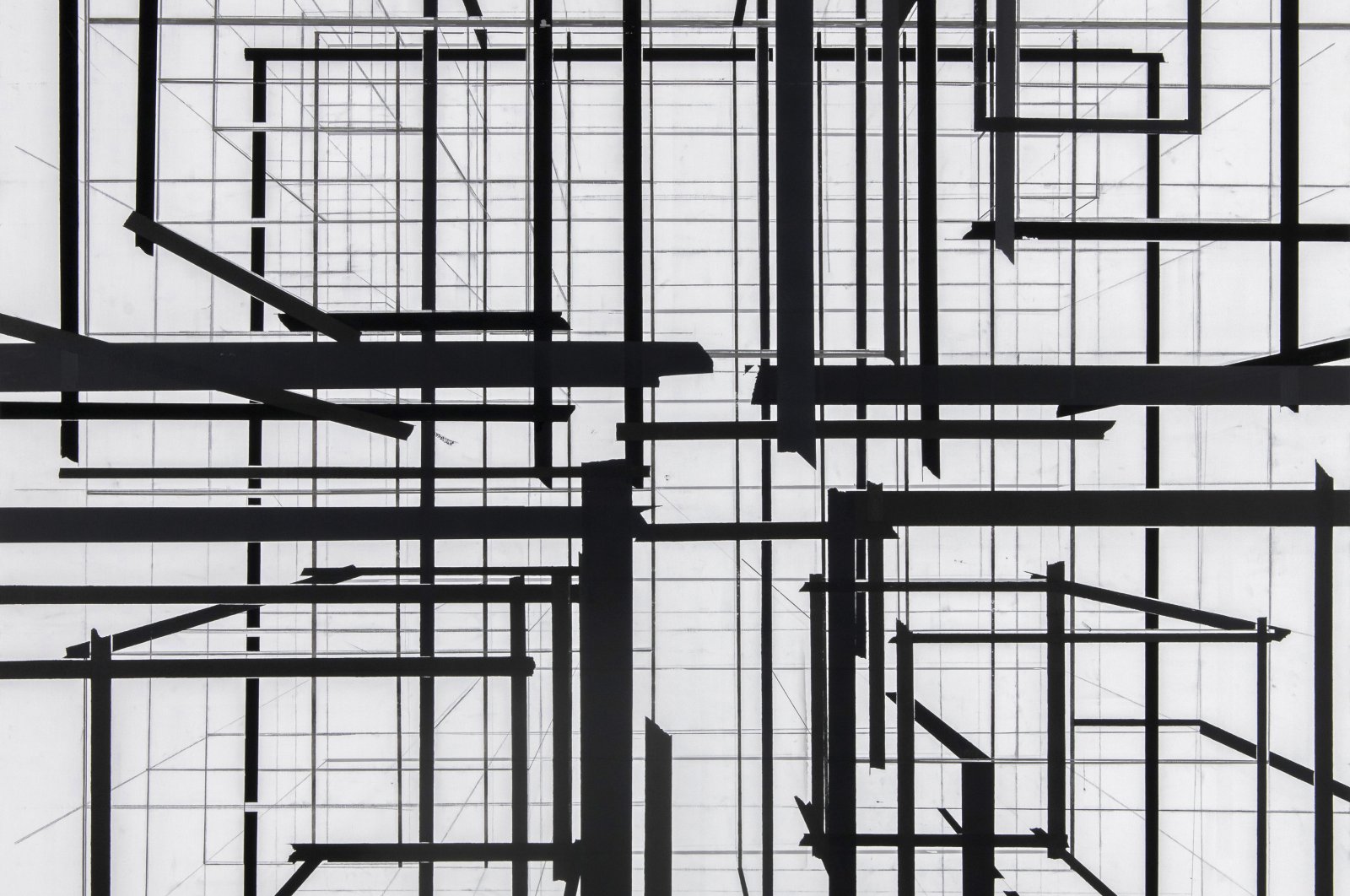 Like architecture turned inside out, into a hyper-conscious experience of interior space, the works of Nuri Kuzucan have a way of reflecting the subtextual blueprints of rooms and hallways such as at Galerist. In the historical building, where a contemporary art gallery has renovated the airs and contours of structural thought from a century past in continuity with present taste, doorframes and ceiling light come to embody principles of the aesthetic display.

On entering the second floor, which, as through an underground tunnel, winds through closed, musty confines, artificial bulbs extend along the upper perimeters, accentuated by the off-white painted walls. An almost perfectly squared work of acrylic on canvas by Kuzucan stuns with its scale, and by the span of its variation on a rectangular motif, adapting mute tones from pale to opaque, however with a greenish-brown tinge.

The distinctive quality of "Re-construction" (2020) is, by force of repetition, an evocation of Kuzucan's visual vocabulary. With the mind of an installation artist, and peculiarly fitting for Galerist, Kuzucan's works are intimate captures of the curatorial area in which they are shown, as in silent dialogue with their surroundings, reflexive, perhaps subjective. The effect is enveloping in a political moment when the white cube has come under fire in the art world.

Instead of prompting uppish remoteness, however, the art of Kuzucan is inviting, offering a window of windows into another world, that, simply by the act of looking, opens to receive even its most naive and skeptical seers. And yet, for all of its technical precision and exploration of logic made visible, "Re-construction" is not entirely exacting, retaining elements of the organic, following through to the nature of illusion.

Across from "Re-construction," though curiously out of sight beside the entranceway before the main gallery halls of Galerist and practically invisible for its white-on-white scheme, are a pair of works, "Model 1" (2020) and "Model 2" (2020). They are minimalistic by impression, but not by design, as they integrate, wood, glass and paper media, and utilize the subtle phenomena of shadow as innate to their physical and theoretical expressions.

The effect of diagonal over straight lines, of glass as material over a shape manifest, reconfigures the notion of the abstract and the practical. In an anthropocentric world in which unnatural figments of formality, such as right angles, are employed to abandon, and have become necessary to the manufacture and maintenance of modern civilization, nature itself is relegated to unworkable abstraction, when it would otherwise be the opposite.

With a similar approach, or at least in consequence, "Open Space 2" curated a work by Seçkin Pirim, titled "The Resulting Process #1" (2020). Fashioned like the remains of a handcraft workshop out of layers of Bristol paper cut-outs, the piece contrasts sharp linearity against curves and wisps. Again, through repetition, in this case overlapped paper, the work makes non-ordinary sources of perception comprehensible, and even part of a visual language.

Everywhere in "Open Space 2" there is a sense of floatation, of human construction suspended in spaces that are open, and by that meaning free of fixed perspective, as a hypothetical place where experimentation and interpretation are not bound to the pressures of canonization and permanence. "Diptych Space" (2020), in contrast, is more composed than "Re-construction," instilling a simulacrum of absolute dimensionality.

As a recreation of digital virtuality, "Diptych Space" has that fragmented appearance of computerized figuration, like an outline. In his body of work, particularly in "Diptych Space," Kuzucan excels when conveying depth. With lines of shadow and scale and a focus on the emptiness that defines form, the acrylic canvas is a multivalent demonstration of op-art beyond genre pretense, as the sheer craft of a meticulous, conceptual painter.

The floor plan at Galerist has kept, in many ways, the antique spirit and constitution of its past, resembling the classy residential blocks of Beyoğlu district that were once the toast of Istanbul's multicultural, international elite around Istiklal Avenue. One work at "Open Space 2" retains that homely atmosphere, only rendered to the underlying theme of the show's curation. It is "Untitled" (2006-2020) by Suat Akdemir, consisting of frames torn of their painted canvases.

The materials are described as "7 aligned frames, interfered pieces of canvas" and together relay the deepening of spatial echo that Akdemir and Kuzucan executes with such originality as that which grace his scratched starts. The idea of interference could be synonymous with emptying, an essential aspect towards the discovery, or articulation, of openness. Beside it, a framed, inked piece of paper by Canan Tolon, "Datça" (1997) has the show's recurring, noetic interiority.

As from below the city grid, Kuzucan's deft work, "Black Cubes, White Gaps" (2020) is reminiscent of how the blocks and lots of Istanbul might appear underground, as their foundations drag across the temporal plane, shifting, vulnerable to dislodgment. "Black Cubes, White Gaps" is slight on the whiteness that would slip between the utter existence of concretized construction. For visual emphasis, Kuzucan exaggerates its basic pattern.

Befitting the cubic design, a new work by Sinan Logie titled "Fluid Structures — Phase 20" (2020) is ultramodern in its presentation of plastic boxes, variously filled with water and ink. There is something about the gleaming, polymeric surface, resinous, containing liquid, that exudes texture. "Black Cubes, White Gaps" adds a mystical, illusive touch, feeling by its sight alone like that of smooth ebony, or a polished magnet, despite being two-dimensional.

There is a concerted harmony of successive associations that could be drawn from the works of Kuzucan as a whole. "Black Cubes, White Gaps" is related to "Black and White Line," essentially a simpler version of certain aspects of the former. Then developed further, his larger-scale work, "Blacks, Greys and Whites" (2019) bears aesthetic connectivity in the oblong, sideways collectivism of elements at play in "Re-construction."

Departing from filled shapes to that of thick, intersecting lines, Kuzucan's piece "Perspective" (2020) lures the eye into its contiguous web, approaching with boldness, at times distantly faint, and it would seem mathematically precise in its representation of dimension, scale, proportion. Still, what it arguably conveys most potently is a visual agent by which to imagine open space. In the urban jungle around Galerist, "Open Space 2" is a welcome tonic.