In the arms of art: 'Spinning the Cocoon' by Contemporary Istanbul Foundation 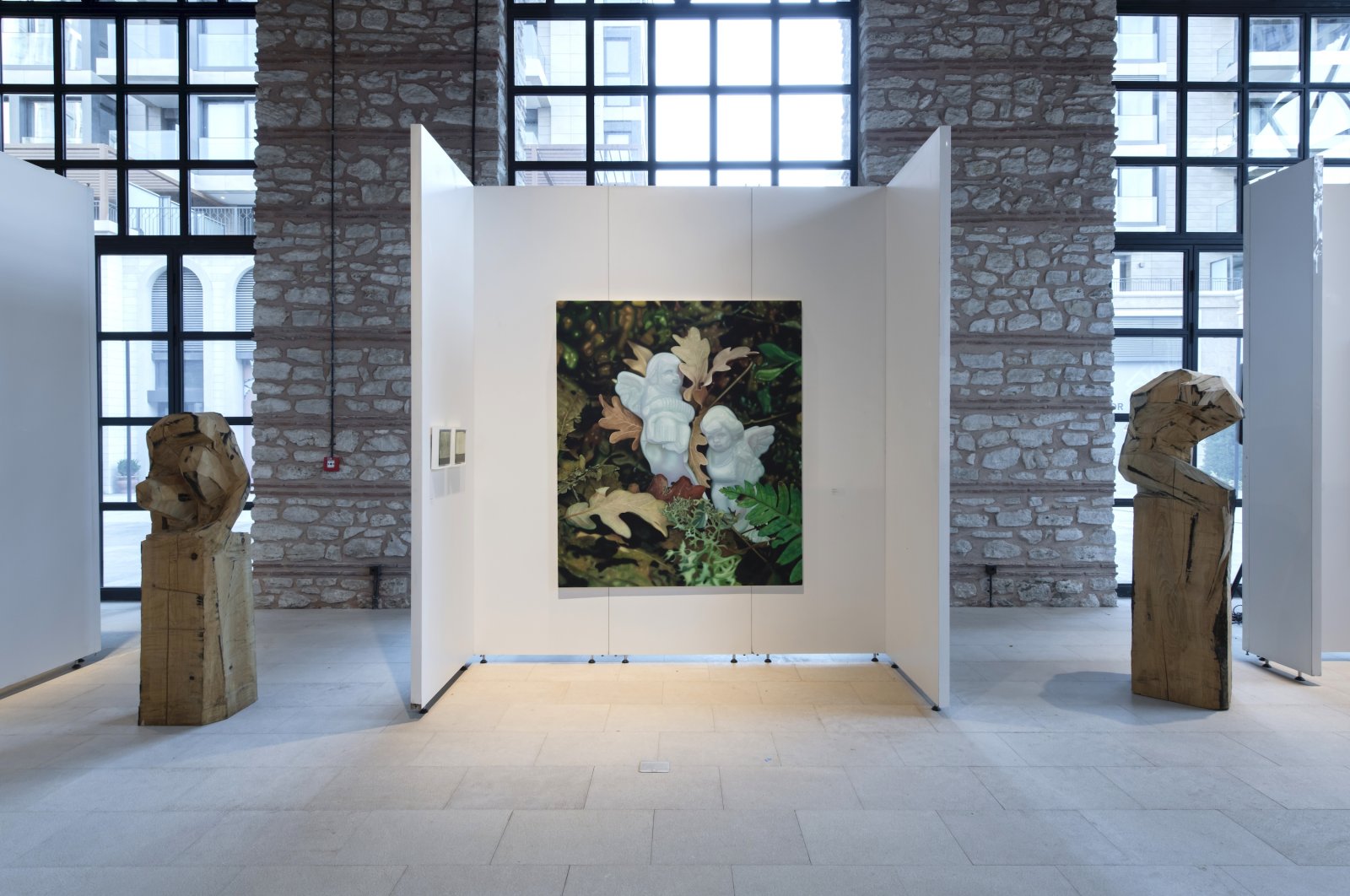 "Spinning the Cocoon," installation views of works by Burcu Erden and Onur Mansız. (Photo by Kayhan Kaygusuz)
by Matt Hanson Jul 27, 2020 11:26 am

Akin to Tophane-i Amire in Karaköy, another restored Ottoman ammunition factory has become an arts venue. Contemporary Istanbul Foundation launched its inaugural show at Fişekhane in Zeytinburnu with 'Spinning the Cocoon'

The towers are empty, and so is the old ammunition factory. But its Byzantine aesthetic, with thin rectangular maroon slabs fixed along sandy arches, is refreshed with an aerated grandeur. Between faded imperial glory and glimmering residential envy, it appears there is always space for new art by the Sea of Marmara, even along its sparser coastlines. As the dust settles about Fişekhane, a restoration project befitting a time-traveling movie set, the gallery ArtOn lent its vibrant roster of artists to Contemporary Istanbul for the show, "Spinning the Cocoon."

Inside, there are collectors, critics, dealers and artists. Behind them, a stunning assemblage of painting, sculpture, photography and varying mixed media works are suspended along the storied, renovated walls of the historic war room. Instead of looking at the works of art, however, everyone stares. They have stopped in their tracks. No one sips a drink. Cameras do not flash. There is complete silence. What ensues, nightmarish, is the thought of a seer who, alone, espies the soul, the metaphor, the passion of creation.

Most immediate are the cloud-like parchment works of Mithat Şen, whose “Istif” series entices with abstract forms colored vibrantly like a naturalist drop in the ocean of modernism. As the bubbles of cold libations tossed and turned, swashing over tongues that wagged and waved into the eyeless tundra of society, there emerged “Two Angels” (2019), enlightening the bleak ambiance, mobbed by the heady commotion of personality talk. The oil on canvas by Onur Mansız is a scintillating, painterly vision of garden mysticism.

With a perfectionist touch, the autumn leaves of a forest interior come into lucid focus by the hands of Mansız, whose craft exudes masterful discipline. And centered within the pile of leaves, shot through with lichens and evergreens, are a pair of gleaming, porcelain figurines. The use of white paint is almost hyperreal as the texture of the polished, artificial objects is juxtaposed with the rustic earthiness of the plant matter surrounding them. The piece has a gravitational pull, a transcendent calling that reflects the process of artistic creativity.

Flanking the oils of Mansız are two untitled works by wood sculptor Burcu Erden, from her 2019 solo show, "Calling for the Mass," at ArtOn. In contrast to the light, atmospheric poise of Mansız, Erden’s capture of naturalism is rough, edgy, hard and raw. Anthropomorphic figures rise from solid blocks, headless and animal. They have a more contemporary cousin in a canvas of acrylic and spray paint by Olcay Kuş, “Untitled” (2016), portraying a stencil-like suit-and-tie workaday sort out for a fist-pumping romp.

The curation, a collaborative effort by ArtOn and Contemporary Istanbul, placed two other works by Kuş across from those of Mansız and Erden. From 2018, they are mixed media exercises in the drawing of hands, an otherwise gentle part of the body rendered mad with visceral intensity by its street art aesthetic, and saturated candy pinks and electric blues. Clasped like a waiter taking an order, and draped with a semi-abstract serving towel, Kuş's hands exhibit the power to give, and to take, beside another gripping, crumpled paper.

One of the most jolting and massive artists in Spinning the Cocoon is Evren Sungur, whose large-scale canvas of charcoal and oil on paper, “The Train of Madness IV” (2018) bears the strength of a civilization and its visual motifs, spanning some imagined epic of muralist-inspired surreality. From the seat of a wooden cart, from which a leafless trunk extends upward and branches out with cartoonish and skeletal arms, an entourage of humanoids and beasts are caught in a rare moment of stillness.

“The Train of Madness IV” has an impressive sweep of depth. Its plurality of perspective draws perception inward. Theatrical in its scenography, the charcoal drawings are reminiscent of unfinished artworks, popular during the Renaissance, and there is a late medieval, Rabelasian feel to its potpourri of unseemly characters. About the monochromatic majority, steely, lidless eyes are ever-open, flagged right angles of jaundiced and flushed hues. And from the arboreal core, white lines mock that of an architectural blueprint, giving definition and concept to the bewilderingly complex pastiche.

Such shows as "Spinning the Cocoon" offer exclusive peeks into the art world and its less visible, emerging spheres of influence. The unexpected presence of fine art prints by art photographer Elif Kahveci spiked the party punch with a healthy dose of ambient naivety. Her works are curious reappraisals of the faculty of sight and its potential to pierce the veil of landscape. Whether of mountains or sea, her lens glides carefully over that fluctuating realm of mythopoetic wonder in which the planet overwhelms human life.

Kahveci’s photographs definitively express the very meaning of the environment as that which surrounds and envelops, but not for mere aesthetic pleasure. Her piece set in the verdant hills of some exotic locale pictures a single grave immersed in vegetal overgrowth. There is an unmistakable sense of the post-apocalyptic through her sight, which she frames so that viewers can look through and experience, simultaneously, her unique vantage point. Her second piece is of a beach, unpopulated yet marked with empty chairs. The sky looms large above all.

Toward an even more nihilist bent, Olgu Ülkenciler’s 2017 mixed media piece, “Fathers and Sons (Turgenyev),” invokes a literary quandary over the dissolution of the self in light of human nature, and how biological reproduction might translate into a philosophy of worldly disillusionment. With a visual palette similar in certain respects of color and form to the graffiti-like strokes of Kuş, and with a bold visionary scope such as that which Sungur conveys, Ülkenciler’s work ingathers the feeling of filial identity and its transmutations of coalescence.

Finally, returning to the urban field out of which "Spinning the Cocoon" spins are representations of Istanbul, particularly in a strong work by the three-man artist collective, Oddviz, whose photogrammetric virtual installation “Kadıköy I” (2018) amalgamates fragments and icons from Istanbul’s trendiest, pro-youth Anatolian neighborhood. A twist of current commentary from the show’s curators, perchance, might be found in one work on display by Ahmet Elhan, “Places – Hagia Sophia 6” (2011), a unique C-print. Elhan, a craftsman of light and its repetition, has created a symphonic geometry of interior design after the religious site.