In the shops: Two installations of 'Part One' 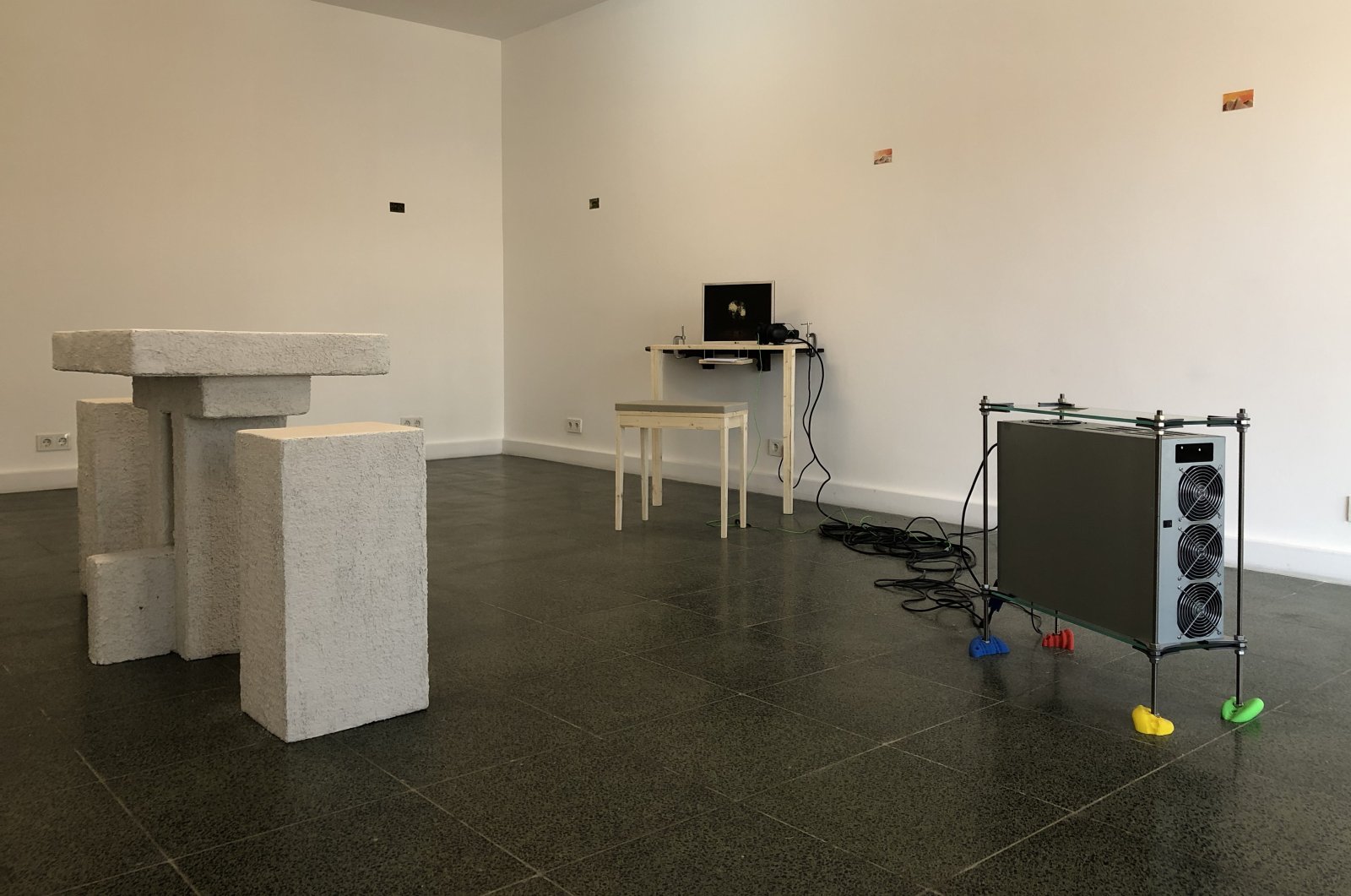 The new contemporary arts initiative 5533, founded by Nancy Atakan and Volkan Aslan in 2007, has produced a two-part series of installations at the Istanbul Drapers Market, featuring works by Ayçesu Duran and Cem Örgen

Downwind from the Aqueduct of Valens, built in the fourth century of the common era, there is a complex of breezy, multistory storefronts that make up one of the first experiments in strip mall architecture in Istanbul. Now flanked by swirling freeways, the capitalist optimism that ended 20th-century globalization with Americanized free market rule has been reduced to a whimper, as so many glass storefronts at the “Istanbul Drapers Market” (IMÇ) are blank with the smudge of tape detailing their abrupt closure, or slow reopening.

At the fifth block of IMÇ, a trio of young artists is sitting in conversation. Among them is Can Küçük, who is tasked with overseeing operations at 5533 for the first half of the year. Titled after the block number of the shop room where it is based, 5533 has the ambiance of a warehouse factory. Cem Örgen, who studied industrial product design, produced a diverse and ultramodern installation, “You Can’t Hide in the Sky,” incorporating computer games, camouflage painting and sculptural elements.

Küçük, whose works play on the histories and manufacturing of readymade art and decorative furniture, examines elements of the industrial environment in his practice. As a point of site-specific consciousness, he made a door ringer out of a hard-coiled metal spring which hangs from the ceiling behind the door to 5533, as it swings open to the sound of a spoon clanking out of an empty rectangle. The cold, metallic assemblage is prefatory to the works of “You Can’t Hide in the Sky,” which includes window blinds that resemble flat, model swords.

For the piece, “Weapon for Ephemeral Eyes,” Örgen laser-cut stainless steel into the shape of a body-length medieval saber, which inconspicuously functions as vertical blinds and stands in direct, visual dialogue with a variegated work, “Case, Keyboard, Winter,” in which a single-channel video plays on loop from a computer monitor, projecting the artist’s character from the gameplay “Demon’s Souls.” Örgen, born in 1996, is a gothic postmodernist with a weakness for good graphics.

As a designer, Örgen has a distant appreciation of objects, as the media through which styles and usages are pronounced, exchanged and transformed. As part of the art world and its interdisciplinary inclusivity, his installation for 5533 quietly pulses with the aesthetic and conceptual fascinations of the cultural moment, considering such concurrent shows like “Elektroizolasyon” at Arter. But Örgen does not seem to be trying to fit in, quite the opposite, his individuality is as genuine and eccentric as his reasons for doing what he does.

There's a whole and complete contiguity of ideas that run through Örgen's installation, “You Can’t Hide in the Sky,” which speaks to the contrasts between movement and stillness. The use of camouflage paint, in particular, is associated with that middle ground of rest potent with a sense of anticipated compulsion. It is a fixture, and settlement, in all of its modes and expressions which defines domestic life. Yet, spun within the frame of a mind that is unable to stop floating and spinning, in search of action, Örgen’s is the voice of youth, self-objectified.

One aspect of “Case, Keyboard, Winter” is a central processing unit (CPU) mainframe with mountain climbing handles affixed to the end of its legs. Every unit of the piece is handmade. The bench and table on which the monitor rests are jigsaw cut spruce, and topped with a sponge cushion, the work has an unfinished look. Room 5533 is essentially a white cube. In the center of his installation, Örgen manufactured a table out of aerated concrete. It is sculpted with a depression into the core of its surface, which makes for a medievalist, ceremonial air.

Functionality is turned on its head throughout, “You Can’t Hide in the Sky,” such as where Örgen sliced an Adidas tracksuit and represented its vintage color and form in the keys of a piano. The conversion of materials into likenesses other than that normally ascribed to their original contexts is an apt motif in Örgen’s installation from the beginning. Over the door, Örgen cut out a car cover, and fitted it with transport wheels. The paper-thin resemblance of the piece, “Folded Skin” requires a stretch of the mechanical imagination.

Across the selling floor of the compact shop room, Örgen applied silicone to the construction of a cable management spine so as to convey the shape of a backbone connecting the wall to the tiles. The work, titled, “Sweaty Bone,” has unassuming visibility, yet holds to the vision of its idea with certain confidence. And wrapping the ceiling lamps in medical gauze, softening their illumination, "You Can't Hide in the Sky” encompasses the commercial interior with the double-sided, mutual nature of concealment and exposure.

Örgen littered texts around his installation, which winds down a hallway under a course of polypropylene plastic sheets for the piece, “Water and Bad,” set within an aluminum profile and pockmarked with screw nuts. At the very farthest corner from the entrance to 5533, there is a stack of pages. On it, Örgen has divulged some of the psychological genesis of his artwork as an artificial, environmental metaphor for his dark relationship to the source of natural light, as reflected in how conscious he had become of the narrowness of sight, as limited by the eye.

When a seed falls

While Örgen could be said to have amplified and exaggerated the effect of industrialization on the life of the individual, Ayçesu Duran took a different approach when producing her installation for the ongoing, two-part show at 5533, simply called, “Part One.” Many of the shops at the Istanbul Drapers Market sell and repair musical instruments, which Duran merges with in a creative light, placing her off-site piece, “Rast” at the end of a hallway. The term, “Rast” is a concept, often used in Turkish and Persian music, which is also the synonym for the root word of “coincidence."

The immediate work, “Feeding Instrument” (2021) is performative. Once a day an automatic fish feeder releases bird seed that falls atop a bottom high-hat cymbal. There is a window beside the colorful display. Although there are birds that come and in out through an interlocking pattern of spaces in the wall, many red and brown seeds lie uneaten. And facing it is a wood canvas frame titled, “Gamma” (2021), which Duran gleaned from a shopkeeper at the Istanbul Draper’s Market, the former mall that has become a textile trader’s market.

Unlike alternative fringe outfits that oppose and contradict the cultural establishment with shock value and brash naivety, “Part One” at 5533 extends an order of business in the cultural sector that seeks to grasp and expand on both subtle and overt overlaps between industrial manufacturing and personal invention, between economic obligation and individual self-exploration. The unapologetically abstract gestures of Örgen and Duran are not altogether divorced from aesthetic art. The art initiative 5533 frames its appreciation with respect to professional makers in mainstream industries whose work is as subject to artistic interpretation.