In the spirit of portraiture: The many faces of Fahrelnissa Zeid 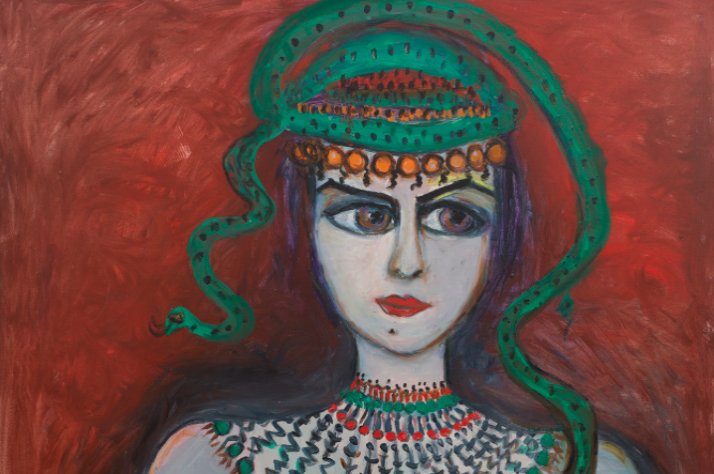 For its current exhibition, 'A Three-Character Play,' the Dolapdere gallery Dirimart mounted a stunning variety of portraits by Turkish painter Fahrelnissa Zeid, largely known as an abstractionist of peerless renown

Of the many muses of Henri Matisse, one was a Moldovan Jewish refugee who also modeled for painters Aristide Maillol and Pierre Bonnard. More akin to the bold, rotund lines of Maillol’s female figures sculpted into polished stone and metal, than the exotic colorations of Bonnard, Matisse drew the immortal beauty of Dina Vierny with a singular sweep of his pointed sketches, fading off the page like an echo, or a wisp of smoke.

In the oils of Fahrelnissa Zeid, who won perennial admiration among art circles in Paris with large-scale canvases stylizing Byzantine and Islamic geometries with the Eastern mystique of her elite Ottoman upbringing, Olivier Lorquin, the son of Vierny, is the subject of the first of 27 portraits on display for the Zeid show at Dirimart, an Istanbul-based contemporary art gallery established in 2002. Her aesthetics are decidedly more akin to that of Bonnard, as the boy’s features have a pellucid vibrancy.

“Portrait of Olivier Lorquin” (1959) is a fitting open to “A Three-Character Play,” as many of the works are of child figures, with the inclusion of Vierny herself in muted colors, looking out through the signature big eyes of Zeid’s soul-searching portraiture, almost reminiscent of Margaret Keane. Finally, the clinching piece is a documentary by Lorquin, commissioned by Zeid in 1974. As it was never broadcasted, the screening of it at Dirimart is a rare window into her art.

“Naturally, of course, art is an extension of the artist, an extension of the artist’s inner life. We see the inner life of the artist reflected in her works of art,” said Zeid’s daughter Shirin Devrim in Lorquin’s film, “Fahrelnissa Zeid à Paris 1949-1975,” elaborating high-mindedly like the actress she was, and author of “A Turkish Tapestry,” based on conversations with her mother. “Although Fahrelnissa is my mother, I can only really know her by knowing her works.”

By the creative logic of her intellectually elegant daughter, Zeid’s self-portraiture indicates the artist’s insatiable hunger to learn more about herself by painting. The show has technically two self-portraits, with pencil on paper from the 1930s and with pen in 1951. Zeid painted “Fahrelnissa” (1983) in her 80s, although it is of herself as a child. By the mirror of age, to conceive the self at the beginning of life at the end of life draws infinite kinesis.

The two Zeid self-portraits curated for display at Dirimart show the artist’s face at a semi-profile, looking back, as it were, from elsewhere, toward her work, herself. It would appear that she was not entirely self-conscious in the same light as she was with her more objective pieces, of others and of mythical figures, like “Woman with a Snake” (1985), or of the many untitled portraits.

“Self-portrait” (1930s) is exacting in its realism, a highly disciplined, naturalist study of the lines of the artist’s own face, her uncompromising beauty which won her marriage into Hashemite royalty. But short-haired, and with an upraised eyebrow that reveals her intellectual eccentricity, Zeid was as ambitious as she was ravishing. Some 20 years later, “Moi” (1951) is less flattering, both artistically and in her self-representation as an entangled fray of scribble.

Perhaps owing to her immersion in family life, as a devoted mother, wife and daughter, Zeid painted the closest people to her differently than she would others, or her more adventurous imaginings. It is evident in the pair of portraits made of her niece, Füreya Koral, one of which could be excavated from the site of Roman antiquity, as it has the young Füreya watercolored in profile within a circular frame, adorned with a blue headband and cropped hair.

Both works, “Portrait of Füreya Koral,” from 1926 and 1945, detail the inner harmony and creative passion that carried Koral into fame herself, as Turkey’s preeminent early modern ceramicist of note, bringing the traditional plastic art from the soil of Anatolia into the modern worlds of art and business. Although the 1945 piece is a pencil drawing, Zeid’s portraiture of her niece is some of her finest works, demonstrating her art as the transmission of kindred love.

Yet, it is in the seven untitled works at “A Three-Character Play” that impress the force of visionary originality that possessed Zeid throughout her life. The first numbered is an undated oil on canvas of an androgynous person in a green top. The sideways glance of their blue eyes, the puff of hair that fades into a black background and the redness of their pouting lips make for a lively, entrancing figure that is as real as it is perceived.

With all of her being

Her other untitled works appear like fiction that gives the reader the sensation that the words they are hearing in their minds must be telling them a true story, for it cannot be that they are fancied by a remote individual, just picking out thoughts like old, stray hairs. An oil painting in 1979, of a child in a yellow turtleneck, has that mesmerizing documentary quality.

But it was Zeid herself who said that she strayed away from painting a person as a photograph captures an image. There is only so much realism behind her portraiture, only so much naturalism in her paintings. With a sturdier gaze, its strokes are animated with their own soul. Dirimart reasserted her point with a wall text beside her portrait of Sara Koral, her grandniece.

“This is not a photo,” her words translate, with poetic gravity, beside her undated oil, “Portrait of Sara Koral,” which shows the exquisitely dressed young lady in a red gown up to the waist, bejeweled in pearls with a dazzling air befitting her family culture. “It is the picture of the soul of the person I have made. All the inner life, the past, all civilizations that have come and gone appear at that moment in front of me.”

It is safe to say that Zeid had a way with women. Her gleaming oil, “Femininity” (1981), painted just a decade before the artist’s passing, is a reminder that age could not diminish the profundity of female expression that she exuded in person and in her work in her golden years. Although its title is after a concept, the piece is anything but conceptual, showing a woman dolled up with all of the specific charms that would distinguish her as a guest to admire.

Zeid is an unstoppable heartbeat in the luring realm of posthumous Turkish art. While it is unfortunate and while of slight importance to prevailing concerns that “A Three-Character Play” will receive fewer visitors than expected due to the global pandemic, art-goers in Istanbul and abroad can be sure that Zeid will return, in full regalia, as always, a painter of universal spirit who treated herself and others as equal subjects on one grand voyage of earthly creation.