On language and food: Love of hors d’oeuvres at 'Salad Cake' 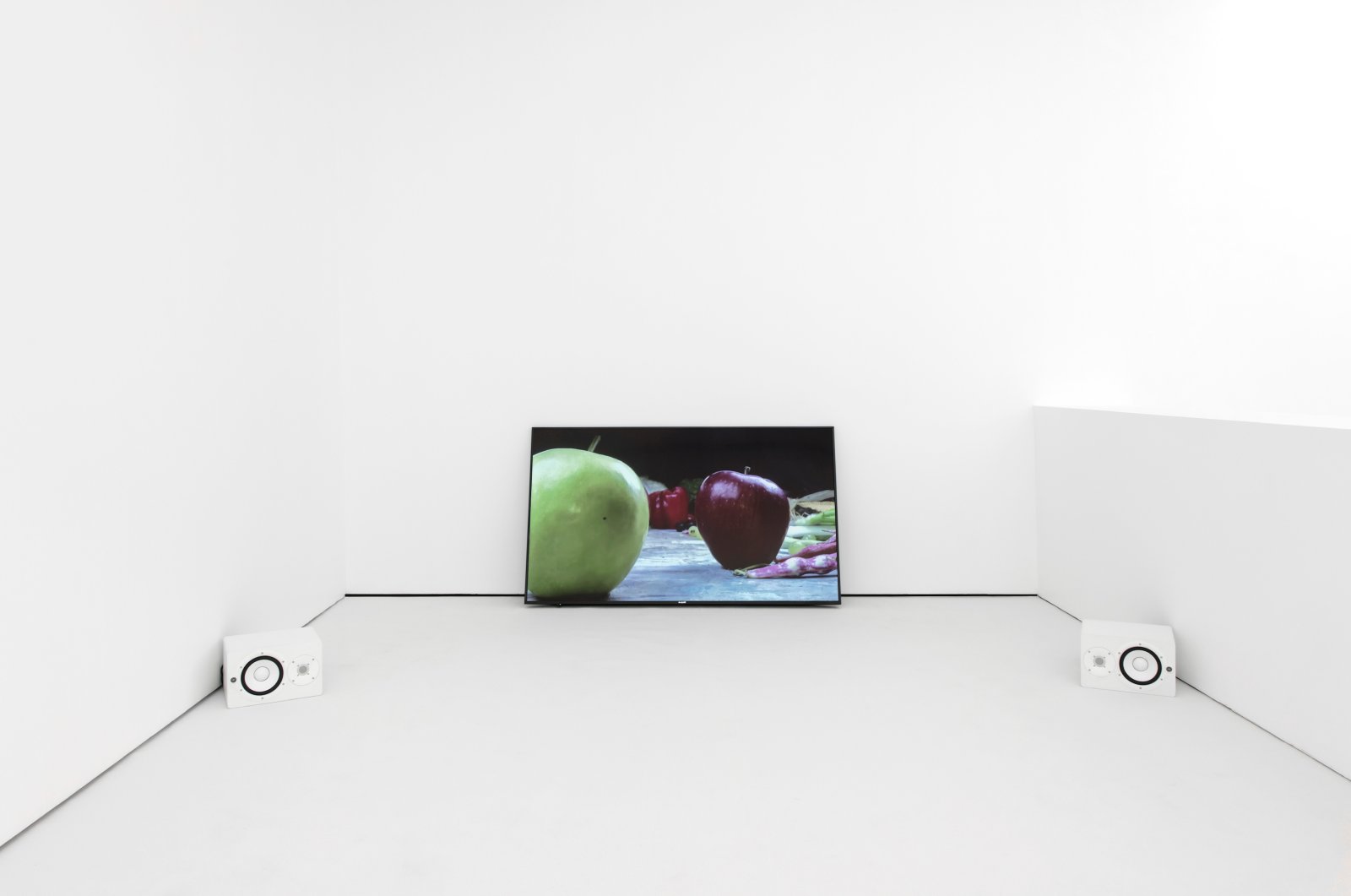 In Balat, the contemporary art gallery, The Pill, is exhibiting a series of works by Irem Günaydın an artist who places writing at the heart of her creative practice. The show, “Salad Cake” is a love letter to edible enigmas

The shadow of a green rabbit is cast over the entrance to The Pill, an otherwise nondescript storefront of a pale, semi-transparent whitewash, its entrance only steps away from the bustling inner-city traffic along the Golden Horn inlet. With reference to pop culture as televised via America, the rabbit conjures child cartoon nostalgia for the wily voice of Mel Blanc over the elusive character by Tex Avery.

Yet, the curious silhouette of the bunny as it stands incarnate at The Pill in Istanbul is not chewing on an orange carrot stick down to its green shoots. Its body leans against the exterior wall in a nonchalant fashion, rather hospitably, as to say, welcome, let’s sit and dine like civilized human beings for once. What the works of artist Irem Günaydın offer as curated inside The Pill, is an eccentric play on the inherent variety and plain materiality of rabbit food.

Most immediate, the entryway foyer before the main gallery at The Pill is standard white as is customary for the majority of shows at the small institution that uniquely exhibits Francophone and Latin American artists from Paris and Mexico City for art lovers in Istanbul, certainly an invaluable exploit. Günaydın is local, however, from Istanbul, that is, despite its aversion to the prescriptions of exclusivity on the urban chain of neoliberal globalization.

And it might be argued that there is no other commodity quite like agricultural products to design and influence the economic ties and multicultural sways of international relations within the zeitgeists of old, and of today. Günaydın, however, does not treat food as such, but approaches the methods of its culinary preparation as philosophical metaphors, putting such elements as Newtonian physics, Grecian classicism, “The Matrix,” and art history into a blender.

The opening of “Salad Cake” spans a peculiar, autobiographical literary treatise, sprawled over a limited-edition poster. The outline of the recurring green rabbit stands under a titular text, “I owe you the truth in painting and I will tell it to you.” The font is elegant, old-fashioned, befitting the curtains of Ionic column imprints that hang before the core exhibition space. It has a contrasting effect, tricksy, rabbit-like.

In her conversational writing voice, Günaydın introduces herself as a “rather young person” penning a letter to the reader “as an artist” and stipulates that the letter need not be answered. In fact, if the reader might try, they’d likely not find its author by her supposed name. She goes on to reveal that there are two Irems, in fact – one who makes art and the other who makes a living in a foreign exchange office.

Almost right away, she breaks from her humdrum professional confessional to thoughts on the ancient Greek pantheon, specifically the beauty contest, hosted by Paris of Troy, between Hera, Athena and Aphrodite over the golden apple. Under the heading, “Maceration,” which essentially means chewing, Günaydın goes from Newton’s gravitational apple to a spinning DJ whose record choices mirror Paris of Troy deliberating over the three goddesses.

Günaydın relates the force of gravity to her writing practice, and to the upward and downward motions required when cooking with a knife. And then, in her characteristic manner of flitting across subjects, she refers to the pill scene in the Matrix, which has curious parallels with the gallery in Balat showing her work, and with that of the rabbit, although green instead of white. Irem is like Alice, traveling to wonderland and back through her imagination.

By way of color

If there is a relationship to the apples of French artist Paul Cezanne and the golden apple of Greek myth, Günaydın has inferred that it might be found by also relating the works of two other painters, gifted with historic insight into the nature of reality. Since Cezanne painted a basket of apples and transformed the representation and perception of art from Cubism to impressionism, Günaydın reflects on Rene Magritte, Nicolas Poussin and Cornelis Norbertus Gijsbrechts.

Magritte is famed for the phrase, “This is Not A Pipe,” a subtitle to his 1929 painting, “The Treachery of Images.” Günaydın imagined him in his signature bowler hat, presented with a pill, like that which Neo took in “The Matrix” but also, in her fancy, posed before Cezanne. Embarking from the surrealistic interpretation a la Magritte, Günaydın turns “The Matrix” dialectic on its head, stating that there is no pill.

Readapting the 1999 script of the Wachowski sisters into the mouth of Magritte, Günaydın performed a dramatic stunt, interlocking narrative motifs in popular culture and making them her own. Her invented Magritte is quoted: “Then you will see that it is not the pill that changes the state of Matrix, it is yourself.” And following his materialization of a bird who eats the pills anyway, Günaydın goes on to announce the presence of Gijsbrechts.

The 17th-century Flemish painter Gijsbrechts was, according to Günaydın’s whims, “from two-point-five dimensions.” She first describes him as an artist who “makes things that do not exist appear to exist.” And the kaleidoscope of sources runs deeper as Gijsbrechts, under the pen of Günaydın, speaks of a pair of ancient Greek painters from the fifth century B.C., Zeuxis of Heraclea, whose realism fools birds, before Parrhasios of Ephesus, fools Zeuxis.

From words to vegetables

In the concluding passages of her prefatory text work, Günaydın writes reflexively, with a self-conscious forbearance, so as to take the reader along gently into her otherwise dense escapades of surreal fiction. She explains: “Dear reader consider the following passages as a series of zig-zag and curve pathways that gradually lead the eye from foreground to middle ground to background.”

There is a persistent and intriguing accord between visual art and creative fiction in terms of framing subjects of imagined perception. Both are conceptual contexts in which the existence of objects is suspect, the former often defined more in terms of space, as in a gallery, museum or installation, and the latter in terms of time, with respect to the durational length of the storytelling.

“Salad Cake” progresses through into The Pill with a series of rectangular pieces of a wooden aesthetic. Each background is exactly identical, only their variation proceeds with the tacking of transparent sheets on which capitalized texts are printed. They are the idiosyncratic enunciations of Günaydın, whose attention sways between culinary processes and philosophical axioms.

Some are a bizarre mixture of the two: “The fruit on the table / The dishes and the bottles / Are never set for a meal.” Beside a video that finishes the show with the extravagant voice of the artist, a piece of photogrammetry and Multi Jet Fusion three-dimensional print, “Decimal Fraction” (2020) offers an unadorned arrangement of salad ingredients, which, considering her anecdotes from classical Greece to surrealist Paris, make art history.