Pictures at an exhibition: Forum show at SALT Beyoğlu 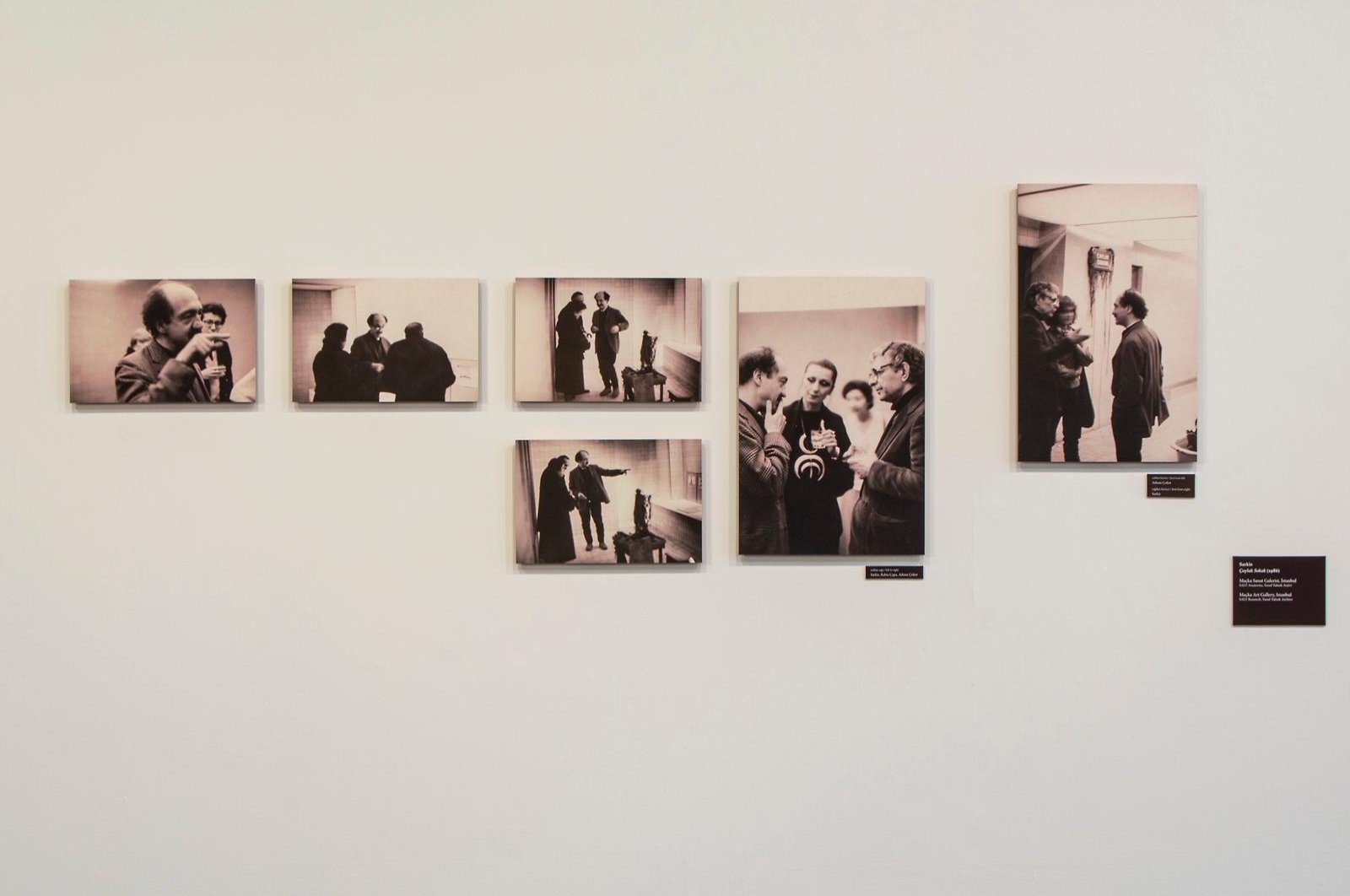 An exhibition view in Forum at SALT Beyoğlu, Istanbul. (PHOTO COURTESY OF SALT Research)
by Matt Hanson Aug 24, 2020 10:39 am

SALT Research’s Art Archive is showcasing a collection of photographs of exhibitions that have taken place between 1950 and 1995. In the Forum at SALT Beyoğlu, one assemblage highlights Turkey’s art history with an added touch of nostalgia given the recent closure of art venues amid pandemic

It is a simple, understated curation, but in that way familiar and comforting, almost like stepping into the family home for an informal teatime roundtable with relatives and neighbors, poring over black-and-white photographs to reminisce about times at once older, and somehow younger.

Ahmet Müderrisoğlu is in mid-pose. He could be playing air guitar, clenching one fist at his hip as he raises his left hand to the sky under the punk mop locks that cover his face entirely. The other seven in the picture appear as out of an interior winter scene in Istanbul among the heady airs of its mid-1990s art world heyday.

Müderrisoğlu is an abstract painter with a pop edge, employing vibrant, artificial colors as if out of an advertising scheme for the uncultured swayed by flashes of instantly gratifying, common images on repeat, however, bent out of shape. In the photo on display at the Forum in SALT Beyoğlu, from the opening night of a show at Devlet Han, he stands next to a stoic, thick-jacketed and long-haired Ismet Doğan.

Doğan is as emotionless as he seems in more recent profiles, where he is often standing beside his mixed media canvases of semi-abstract naturalist representationalism. He is the only one in the photo not smiling or even animated. He must be taking himself very seriously. But the others do not. A youthful, smiling Ali Akay places his hand on the shoulder of a warmly grinning Gülsün Karamustafa. Akay had just become an associate professor and would go on to head the Mimar Sinan University's sociology department. Through her practices as an artist and filmmaker, Karamustafa also tackled social themes, such as gender and ethnicity.

Müşerref Zeytinoğlu laid down on her side, and with her head in her hand, looked up and smiled for the camera. Her research has focused on the skin and the body as the head of the fashion and textile design department at Yeditepe University in Istanbul where she teaches courses on drawing techniques and color analysis. Her blonde hair matched with the casual sweater worn by Hüseyin Bahri Alptekin, a slightly rotund sort who tilted his head upward for the lens like a Shakespearian actor about to pontificate on the muses of the universe. Alptekin had a global mind for the eccentrically hyperreal nexus of installation art and aesthetic philosophies.

With a cool sideways stance, the prolific ceramicist and theorist Emre Zeytinoğlu wraps his palm around a glass and eyes his colleagues, all in the prime of their lives, as their lives are frozen for a passing moment in which they may or may not have been reflecting on the nature of time and its ephemerality. Zeytinoğlu and Akay had just published a book together a year prior to the photograph, “A Deconstruction of the Urinal” (1994), in reference to the classic found object installation by Marcel Duchamp.

And interestingly, the book that Zeytinoğlu and Akay published was released for the opening of Istanbul’s Urart Art Gallery, where photographer and installation artist Bülent Şangar had his first exhibition. Şangar stood as the rightmost persona in the group photo at the Forum in the entranceway foyer of the SALT Beyoğlu. While relatively unimportant in passing, the image is a treasure trove of references to the early career collaborative spirit that would define life in the contemporary art world when Istanbul’s culture sector was bubbling with the unprecedented and as yet unparalleled invention.

A thousand and one words

Another trio of photographs features a stern, middle-aged Cengiz Çekil in all three. Either with his hands behind his back, or crossed in front of him, he is stone-faced and still, but maintains a solid posture. Standing with colleagues for the 1995 exhibition of Canan Beykal at Şantiye Gallery in Izmir, he is mustachioed, wearing a grey suit jacket with downtrodden eyes that might indicate some exhausted tragedy. It is coincidental to note that the SALT has just released a major book publication surveying the extent of Çekil’s oeuvre.

The book, titled “Cengiz Çekil: 21.08.1945-10.11.2015,” was edited by SALT co-founder Vasıf Kortun, who also contributed to the volume’s original texts. Inside its pages, interviews include Vahap Avşar, who appears in the Forum photo series in the same frame as Çekil. Avşar can also be seen joined by artist and professor Selim Birsel, who remains active at such galleries as Riverrun and Öktem Aykut. Avşar has a brighter countenance in his stance, as he dons a white getup, and under close-cropped hair appears as a young and determined man of the cultural scene. By the time of the photo in 1995, Avşar had become a critical artist in Turkey and moved to New York.

Canan Beykal makes another welcome appearance in the next series of three photos at the Forum, which chronicle the 1993 exhibition, “Female Artists from the Republic to Present,” held at Istanbul Archaeology Museums. She stands in heavy clothes of warm autumnal colors besides the Turkish painter Tomur Atagök, who has lately taken on a more polychromatic character in recent pictures, compared to her relatively muted attire nearly three decades past. Her archive at SALT Research is the source for these photos in which Beykal stands across from painters Neşe Erdok, famous for disproportional figures and artist Nur Koçak.

These powerful women changed the face of Turkish art, and in the process, redefined male-dominated stereotypes of regional cultural leadership through creativity, touching on the world of business. A harmonious note of historical relativity between when the photos were taken at the Istanbul Archaeology Museum and now is in the portrayal of İnci Eviner, who watched as former Prime Minister Tansu Çiller, Turkey’s first and only female prime minister, and former Culture Minister Fikri Sağlar eyed a spastic work of multimedia two-dimensional sculpture excavating prehistoric motifs and semi-representational figures.

Eviner is currently showing a new series of works, titled, “What Remains, What Returns, Implications,” only a few steps away from the SALT Beyoğlu at Galeri Nev Istanbul. Her style is deeply informed by studies of the subconscious imagination, with historical references and trains of thought that fleck and spray to abandon across the ink-black empyrean of nightmares and daydreams. And as an innovator whose works continue to influence contemporary art in Turkey, she is in good company at the Forum show of vintage photographs.