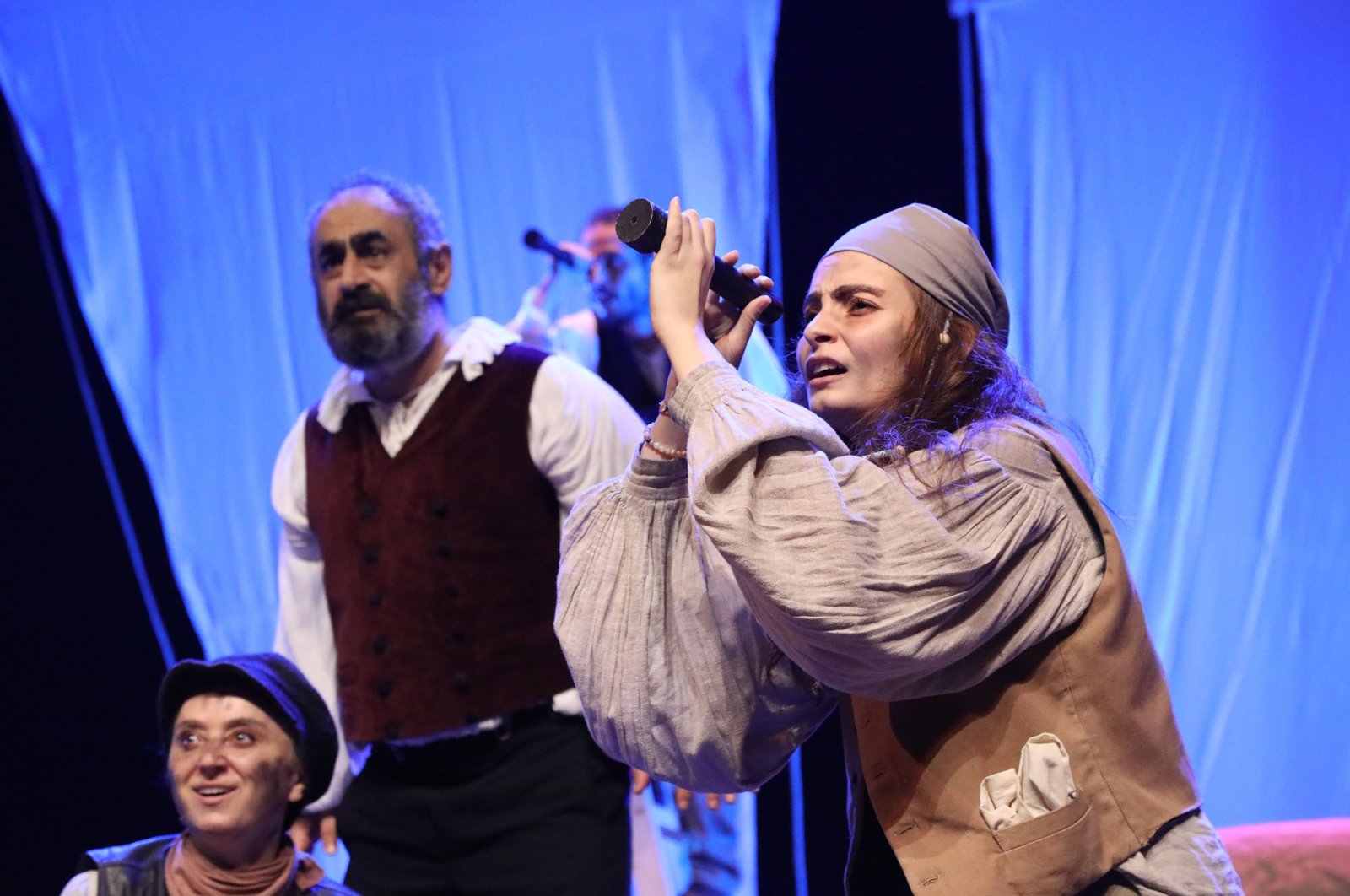 Herman Melville’s "Moby Dick" is one of those thick novels you approach with trepidation because of the commitment it requires. Those who brave the first few waves – you will have to excuse the sea metaphors – will stay for the whole mad ride. There have been a few attempts to adapt the work to other genres and this fall Istanbul City Theaters – or the Istanbul Metropolitan Municipality City Theater to give it its full name – offered us a stage version that manages to convey the essence of the book.

The play opens with the actor playing Ishmael addressing the audience out of character, saying that "Moby Dick" is one of those novels people lie about having read – I doubt the veracity of this statistic, if I’m honest – and that the theater company read it for us so that we do not have to. Actors speaking to the audience out of character has been a trend this season, and this device teeters just on the edge of patronizing the audience, but before I weighed the pros and cons of this tactic, Ishmael turned his back to us, and we were in an inn in Nantucket.

I was very much relieved because I feared that this being an abridged version – a one-hour play with no intermission, this seems to be the standard in this pandemic season – they could have done away with the Nantucket section altogether. In this production, we get a fair bit of the conversation about ships and whales, Melville’s encyclopedic knowledge about the seas distributed among the sailors who are drinking at the inn. The author’s voice is transposed to characters pretty seamlessly.

Another convention the municipal theaters have taken up this season is gender blind casting, which also works to pretty good effect in this production of "Moby Dick." The stage turned very organically from the inn to the ship, with masts and huge sails at the back. When the crew spotted a whale, they got on the whaling boat – on stage, the actors hop on swivel chairs close to the edge of the stage and tug, and the motion does mimic the movement of a small boat. They heaved and threw imaginary harpoons, and even at times managed a slow-motion sequence. The device was also used when Ishmael walked around the deck, and when he passed a particular character everyone but him went into slow motion as he gave us the back story.

Though we did not get the priest breathing fire and brimstone, we did get the evening when Ishmael meets Queequeg. He was cast, as expected, as a big, strong man, with very visible Maori tattoos. He also gave us what looked like a haka dance, but unfortunately, I do not have the cultural capital to verify whether it is anything like the original. However, his difference was not heavily played as he becomes one of the crew.

At the pub, there was much conversation about men risking their lives for oil, and it is always sobering to remember that at the time "Moby Dick" was written, whale oil was as much in demand as fossil fuel is today, illuminating homes and cities. When the uses of oil are explained – again through putting Melville’s words into the characters’ mouths – Ahab’s mania and his crew standing by him as he gets more and more obsessed by catching the oil reserve that is Moby Dick becomes clearer to the audience. In this production, Ahab does not come across quite as dark as I would have wanted him to be. The prosthesis for his missing leg is a shiny white long boot, which doesn’t look quite as menacing as a wooden stump.

The one character that this production made me more aware of was Starbuck, who tries to curb Ahab’s mania. Starbuck was portrayed as a family man who wanted to earn his wages and then go home, and who was willing to stand up to Ahab as much as the circumstances will allow. The adaptation has room for two instances of Ahab’s ship Pequod crossing paths with other ships. The captain of the ship Rachel, Gardiner, asking Ahab to look for his son who has been lost on a whaleboat is a detail I had forgotten and was cleverly chosen here to show Ahab’s determination to stay on his course. There was a bittersweet moment when the disconsolate father Gardiner and Starbuck look like they may have won him over for a rescue mission, but he quickly changes his mind when he heard news of Moby Dick.

The production also paid good attention to the soundscape, treating us to whale sounds, and when their image was not present to connect to, one realized how many monstrous sounds in sci-fi films have sampled these creatures’ voices to create fictive ones. I also found myself checking to see who is moving irritably in their seat because there was a constant sound of wood creaking – which I realized seconds later, was the soundtrack of the creaking of the ship. We were all in it together – with one empty seat between each member of the audience as per COVID-19 measures.

But the soundscape that put us on the ship also brought to mind ships carrying festering diseases. There was a slight mention of spreading disease in the playscript, which the production does not embellish on. I can’t remember if Melville gives us a litany of diseases that spread on ships in the novel – I’d be disappointed if he hasn’t – but I’m glad that this production doesn’t overplay it. And so the production draws to a close before we start to get seasick, having given the audience a selection of important plotlines and also a sense of the digressions that Melville indulges in.