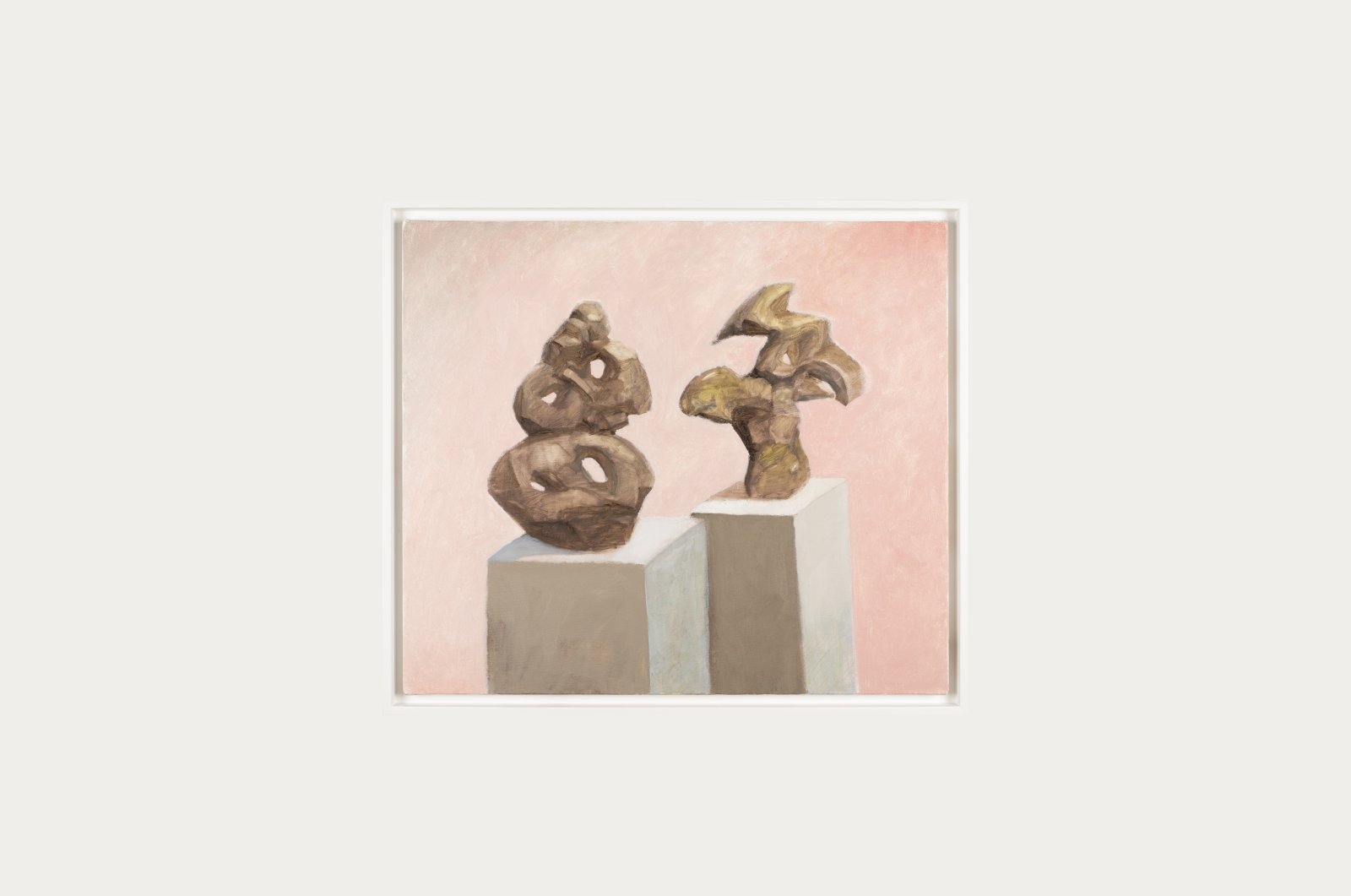 The singular, third solo show of artist Bora Başkan at Öktem Aykut, a small contemporary art gallery in the district of Beyoğlu, traces the visual lineage between sculpture and painting with an alchemical gaze

The title is a sequence of symbols. A dotted circle is greater than a continuous circle, so Bora Başkan asserts, which, although abstract in its significance is perhaps a nod to the concept of the unfinished, or the transparent, as more expansive than that which is, by appearances, complete or solid. The suspicion of solidity, then, is a recurrent motif in the work of Başkan, who seems to ask burning, ancient questions with his latest series of painterly sculptures and sculptural paintings. These queries investigate the origin of matter and its imagination.

Did stones emerge from mountains or mountains from stones? Can natural formations be seen as a kind of sculpture, or at once, of earthen image-making? As painting was initially conceived in caves, on broad mineral surfaces, at what point did prehistoric artists take stone itself as their subject? If these first human artists attempted to visualize reflection, as by the images of nature, painting the medium itself on their medium’s surface, at what point can images be seen as distinct from their source, or as a unitary manifestation?

Such interrogations into the heart of earth, creation, perception and artificiality continue to haunt contemporary artists, as they have since time immemorial. Painting goes back some 40,000 years. For example, murals in the El Castillo Cave in Spain are said to predate the earliest sculptures, Venus figurines found in Germany, by about 5,000 years. Başkan paints, and sculpts, with an intuitive eye for geological time, crafting eruptions of planetary genesis. With its balanced curation at Öktem Aykut, his multidimensional works are visions of texture.

The spare interior of the two-story white cube in Istanbul is host to an eccentric band of represented artists, among which Başkan earns his keep. Left untitled, suspending across the rough, bleached interior, the naturalistic canvases and non-representational statuettes hang over raw shale flooring. The molds defy figurative definition yet have an aesthetically pleasing charm for their apparent sense of completion. And held up to the soft light of the paintings, whose contours and facets are utterly related, the eye sees them as visual art, as images.

Başkan’s show at Öktem Aykut could, from a critical perspective, be described as one of the most successful, or at least impressive, ventures in teasing out sight-based appreciation for abstract, contemporary sculpture. By creating a parallel, a multimedia corollary, between the traditional arts, the rebound effect instills consciousness and identity, toward a musing on the embodiment of the imagination as a reflection of form, like that of water’s innate mirroring in relation to the moon, a leaf or an incarnation of Narcissus.

They are like pedestals at the base of the isolated hills that rise sharply, thinning out toward their plateauing summits. Light white paint traces their edges, an agglomeration of blocks that ascend atop each other, patterned with geometric intimacy. A rock formation below swirls across its face, as a bunch of ruddy boulders lean, darkly at its posterior. But the ground is vague, and although it might come across as being of Earth, there is an otherworldly air about its artistry.

An abstract, egg-white sculpture stands on an off-white, rectangular column. It begins arboreal as a trunk pocked with slight depressions, curving narrowly down, upright and flat at its bottom. About halfway up its bent spine, there are indents that fan out in knotty protrusions. And then it thins, and extends, ascending with exacting detail so as to flesh out its dynamic exploration of concavities and convexities, a wealth of formal changes enough to allow the eye ample space over which to rove, appreciate and move through its contiguous invention.

The pair of works, two- and three-dimensional, chart a path of perceptibility that is mutually animating, almost liquid. And intriguing in relation to the art history precedence of painting before sculpture, Başkan’s canvases execute stone-like forms with sharper lines, which are further defined and arguably earthlier than his effigies of abstraction. He deepens these exercises in visualizing feeling like the sense of touch with paintings of his flowing sculptural aesthetic set on pedestals.

Beside signature degrees of gray that illumine into ethereal threads of light, Başkan is a skilled colorist, employing vibrant reds and muted greens against his otherwise subdued palette of pale black and misty ash. The piece within the piece takes shape toward its uppermost reaches, coming to a point. Its rose-hued base is reflecting throughout, also in the hazy background so as to affect the ambiance of its tonal mixture. It is interesting to also see how the paintings of Başkan are more diverse than their sculptural counterparts.

One such piece includes a succession of interiors, the piece-within-the-piece effect, as five works are erected on pedestals, two of which are pedestals themselves, painting as a psychological construction zone of impractical structures. However, one object-like figment is reminiscent of a prehistoric animal figurine, especially as it is placed beside an antler-shaped bone fragment. Beside the two semi-representational compositions are building blocks characteristic to Başkan’s highland oeuvre of glacial cliffs and swirling mineralized ovals.

In the beginning, there was art

There is a subtle primordial atmosphere to Başkan’s show, as its preliterate, pictographic title might imply. One shelf of eight small statuettes relates a visual equivalent of that which may have come before the 35,000-year-old Venus of Hohle Fels but which have yet to be recognized as part of art history, for abstraction is generally identified within the realm of modernism. But what Başkan’s work provokes is the idea that figurative art would have followed in the same manner that an infant utters nonsense words before learning phonetics.

The many works in the show at Öktem Aykut offer a tantalizing variation on the themes that pertain to how sculpture and painting are related, with an eye for art history. But the boutique gallery is also a world unto itself and like the art of Başkan, aligns with its own history, traditions, techniques and crafts. The curation is unique, such as when paintings extend out sculpturally, attached to walls, as on the second floor of the space, a reprieve from the city, silent as stone.

It is a sample of how Istanbul still retains some of the precious elements of artwork produced on the institutional fringe, independent of the hypercritical Westward establishment and the consumer status quo. The works are not entirely virtuosic and even have quiet minimalism, like finding a special rock half-covered in sand on a remote beach. But there are aspects that trigger wonder, magic and thought, an apt source of meditation on the power of perception to break through the mold of the imagination and its origination in materiality.