The brevity of solitude: 'Home Alone' with Pera Museum 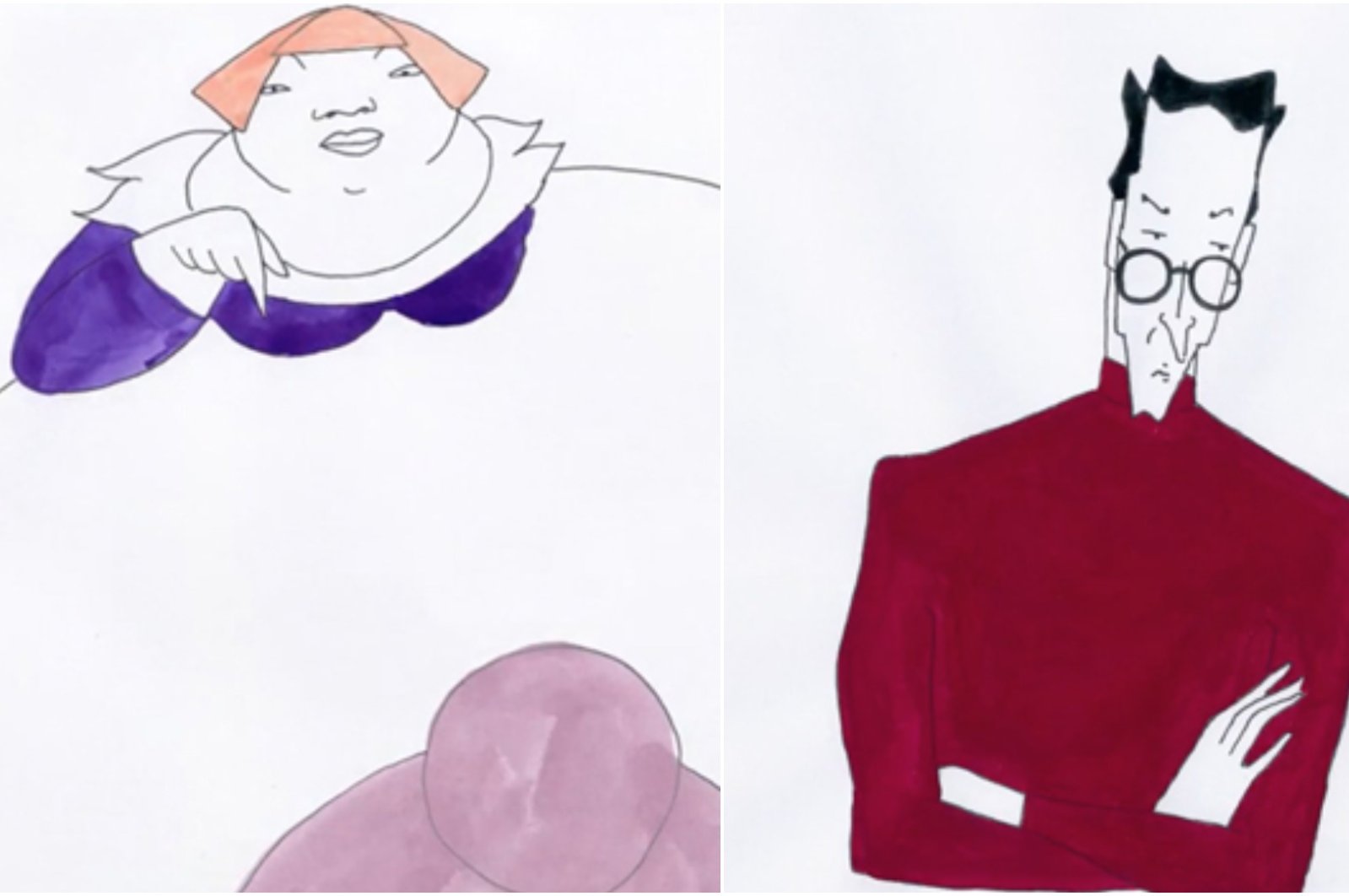 As part of its online programming curated for mass quarantine, Pera Museum is screening seven films on its website under the title, 'Home Alone,' addressing themes such as art criticism and the power of animation

The film "Merkür" (Mercury) refers to a fictive restaurant and spell of planetary dysphoria, when a neckless art world diva pronounces that she is suffering from a sudden bout of mercurial retrograde. The scene, meticulously crafted by directors Melis Balcı and Ege Okal, likely occurred in countless variations at the lobby cafe of Pera Museum, where a piano once owned by Maria Callas sets a prominently elitist tone.

The one-act animation begins with a young gallery assistant and aspiring artist kindly asking her boss if she might notice one of her original sculptures. The exchange is excruciating in its familiarity but adds a tinge of sympathy. It is the first of a barrage of anxious moments in which she is shunted. The young woman sits prim enduring total moral degradation before a trio of stereotypical proportions.

In a little over five minutes, "Merkür" overlaps a distended series of conversations that critique the art world and its highfalutin social norms. It is an apt point of reflection during a time when everyone in that field must scale back and reconsider new angles within the current saga of forced domesticity and social distancing. It might come as a windfall to those who were already inundated with the long-winded close talkers of art-speak logorrhea.

Instead of recognizing her as a potential talent, the people at the table merely pontificate to abandon, venting their egos peppered with Italian greetings, a tribute to their frequent appearances at staple art events like the Venice Biennial. But in "Merkür," they revolve around a fair. A man at the table shows an art object he purchased for 7,000 (no currency), and the loud Anglophone who has just been bestowed with the title of director admonishes him.

The gallery director pipes up as a waiter slides a lobster under her face. She stretches to compliment the man, for curating what she identifies as an “elaborate” show by a sculptor whose works are spliced into the film as a bleakly minimalist column beside two spheres. It is clarified that the assistant is not an artist, as she foregoes speaking for herself. They continue to lionize the sculptor, named Daniel, for expressing “self-reflexivity” and his “sociopolitical identity.”

In her one attempt to express her opinion at the table, which is increasingly muddled by overlapping voices, she denounces the artist of their affections as “self-indulgent” and declares that “artists hide behind those propositions,” which is “not saying anything new.” Her cogent argument is quickly brushed aside by both her boss and their company, who abruptly prioritize the topic of their astrological signs.

To prevent a full-swing panic attack, the aspiring artist and gallery assistant excuses herself to the bathroom as the gossip swirls out of focus. The simple, though effective animation follows suit, as lines thin and figures warp. As the party leaves the restaurant, she is not invited to join them further into the evening. And surprisingly, she even compliments the man’s purchase from the art fair but is met with the silence of invisibility, voiceless and alone.

In the opening scene of “Oh Willy...,” a stop-motion animation film by Emma da Swaef and Marc James Roels, the protagonist’s mother faints at home after serving herself a tray of refreshments. She is bare, her soft woolen frame a textural opposite to the glassware that shatters under her as she lumbers through the kitchen. The homey environment is juxtaposed with a sharp cliff, over which a goat plummets to the ground.

Willy, a rotund, balding chap, then comes to visit his bedridden mother in a closed, naturist community. There is a comic touch to the whole mood of the film, which is interspersed with flashbacks. Willy remembers growing up immersed in the harmonious hippiedom of his mother’s alternative lifestyle. When she dies, he remains dressed at all of the appropriate funereal ceremonies in her memory.

The textile materials that define the world of “Oh Willy...” are remarkable in their accurate reflections of household goods and fixtures. The outdoor settings are equally inspired. It is with painstaking detail and a lush soundscape that the directors have created an authentic representation of human experience, with all of its magic and mystery intact. Without a word of dialogue, by contrasting beauty with the grotesque, “Oh Willy...” is an existentialist fantasy.

The recurring appearance of a goat prompts Willy to face his childhood, and a curious encounter with a mammoth-like creature brings him closer to his death. Beyond fear, he grows a beard and befriends the monster. The rousing music and sound design by Bram Meindersma, featuring the Wagner composition, “Vorspiel” and otherworldly weirdness of the film culminate in Willy’s prodigal return to the nurturing of his mother in nature and the freedom of his origins.

As part of its curatorial text, Pera Museum explained that “Oh Willy...” is an animation that has the power to “transform inanimate things into feelings.” In like fashion, the two-minute short by Alex Moy, titled, “Idle, Torrent,” explores “personal growth in tumultuous times,” so as to convey the potential of stillness and discomfort to catalyze inner development. And truly, when the world must sit on its hands and stand behind closed doors, it is an opportune note.

Fading in to show a series of five sketches, “Idle, Torrent” is buoyed by its electronic soundscape by Bryan “The Bee” Natalio. At first uncolored lines wave slightly against rudimentary shapes, varying on motifs that resemble architectural blueprints or a floor plan. As new forms and vibrant hues issue forth, molding and merging to drops of water or off-key synthesizers, there is an overwhelming sense that transformation is immanent in all things.

In defense of the short

Pera Museum’s online film series "Home Alone" also includes strong, original works of live-action cinema. Like short stories, short films are a distinctive genre and form of storytelling, which director Ezgi Kaplan explores masterfully in her piece, “Fish Pond.” When four friends arrive at a summer house to spend a few days away from work in the city, they are met by an unexpected inhabitant.

The realism of “Fish Pond” is as unsettling as it is believable. But more, the mood that Kaplan creates is the art of her work. Frustrated by lost items, frustration over jobs and relationship drama, the quartet navigates the emptiness and ennui of getting away. But not even they realize their impacts on the remote terrain and new acquaintance, having previously determined to partake in a recreational diversion.

By the end of “Fish Pond,” the viewer has the privilege to see with an omnipotent eye, like an author who may survey their characters from all sides and assess their humanity. It is that agency of creative vision that Kaplan gives to her audience. The artist, like the storyteller, demonstrates empathy for the human condition by encompassing and even emphasizing personal faults in a world where experience is the result of conscious choices.