To a synesthete: Arter’s visualization of sound 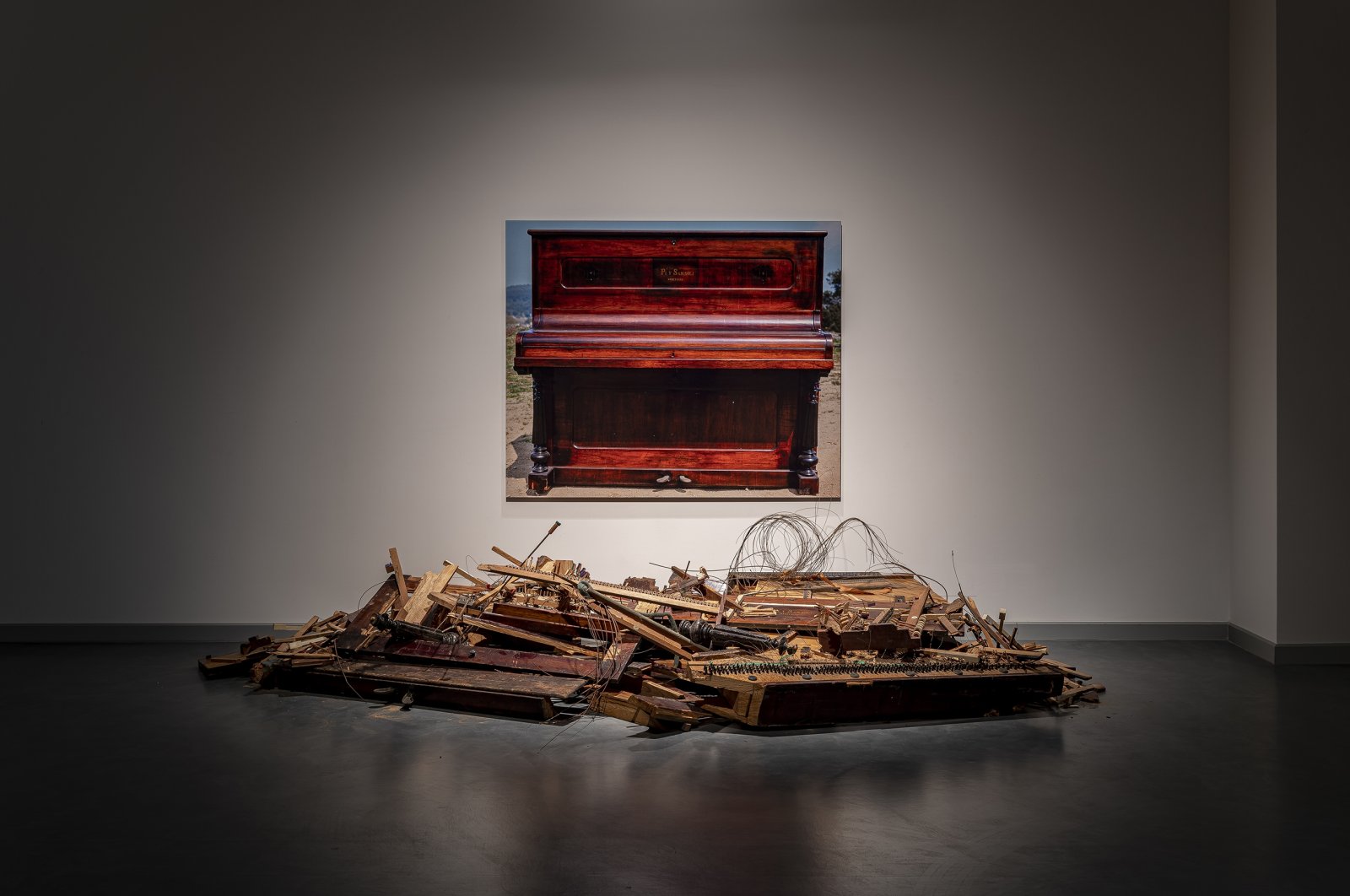 For the current exhibition at Arter, ‘For Eyes That Listen,’ curator Melih Fereli explored an array of ventures from late 20th-century art history to the present in which the senses of sight and hearing overlap

The concept of silence could be said to be a Platonic ideal, a form, not unlike that of eternity, freedom or right, through which the sensual reality of the world passes, and is shaped, ultimately perceived as an imperfect reflection of that everlasting, underlying nature of its essence. It was a career-long point of meditation for the American composer John Cage, whose late works particularly continue to confound not only the music establishment but that of art and culture itself.

As a critique of Western compartmentalization, the art world houses apparently almost every work of cultural import that would otherwise be homeless elsewhere, within the brackets of a society bent on anthropocentric, self-entertainment. Music equally encompasses the realms of fashion and theater, fame and technology, architecture and dance. Yet, in defense of art institutions, and even of Western naivety before the awe-inspiring complexity of the human invention, the nebulousness of art’s real estate remains pertinent.

The double jeopardy of categorization in the face of cultural work expressed at the seam and periphery, emergence and resolution of formal production introduce a peculiar challenge when it comes to public engagement. And under the extraordinary conditions of lockdown society, the presence of music as part of concrete object-based appreciation maintains a special, if nostalgic value. “For Eyes That Listen,” in the winter of early 2021, teases its seeing-listeners with a puzzling course of musical ganders, glimpses and clips.

In November of 2013, Melih Fereli, the curator of “For Eyes That Listen,” supervised a live performance to accompany an exhibition of the artist Sarkis adapting the avant-garde compositions of John Cage. The result was a collaboration between the ney of Kudsi Ergüner and the shakuhachi of Jean-François Lagrost. These musicians were performing music based on 96 watercolors after a flute score by John Cage. In 1983, the piece was known as a “composition-in-progress” and its circular sketches were reminiscent of ethereal ink painting.

In the opening hall of “For Eyes That Listen,” two compositions by John Cage grace the long, centerpiece wall. “Score Without Parts (40 Drawings by Thoreau): Twelve Haiku” (1978) and “Dereau #31” (1982). These are inspired by Cage’s studies of Henry David Thoreau, whose writings on Walden Pond fired the 19th-century Transcendentalist movement in the U.S. during a time when civil rights were beginning to crystallize at the forefront of national consciousness. These special prints of engraving and etching can be seen as avant-garde musical notation.

Cage was also a student of the Zen teacher Daisetsu Teitaro Suzuki and combined his appreciation for the political philosophy of the New England hermit Thoreau with a healthy dose of contemplative, Japanese stoicism. Cage, whose early piano works showed a gift for beauty and symmetry, expanded outward into atonal and serialism with meticulous attention to detail so as to provoke listeners to observe their surroundings, with all of their senses. One of the superlative qualities of art is that it deepens the holism of direct experience.

Beside the notational sketches of Cage is a triptych of pigmented ink prints affixed to nine small loudspeakers. The effect of the piece, “vergnügt und froh” (“joyful and happy”) by Hans Peter Kuhn is of aural space, both by the suspension of imagination required to inhabit the frame of the work in and of itself and as a projection of sound intermingling with the ambient environment. Despite the generally cold, lifeless museum air in which it is situated, there is a lightness to the lengthy interplay of image and sound, drawing seer-listeners close.

And in the middle of the prefatory room is a work by a name that has become synonymous with video art and the intervention of multimedia into the art world since the 1960s, namely Nam June Paik. His piece, “Random Access” (1963/1979) is what is known as a “silent sound sculpture,” the key ingredient being silence, as a conceptual presence juxtaposed with the materiality of musical equipment, in this case, a tower of vinyl on a skewer hovering over a now-vintage record player.

Among the more legendary of the Fluxus artists, a wave of radicalism in the performance and installation of sound, Paik broke into the scene after his concert of Frederic Chopin in Cologne of 1960, during which he leaped from his chair and charged into the audience, targeting John Cage and David Tudor with scissors and shampoo. It was all part of the act, however, they are said to have advised that he take up at least a modicum of the theory that they were then gleaning from exotic philosophies traditional to Paik’s homeland in the Far East.

Tudor, as it were, along with Cage, is a prevalent name at Arter, particularly as the exhibitions of “For Eyes That Listen,” and “Rainforest V (variation 3).” In the acoustical Karbon space floors below “For Eyes That Listen,” Arter premiered “Rainforest V (variation 3),” adapting Tudor’s initial vision as a composer in collaboration with dancer Merce Cunningham on his modern ballet, “Rainforest” (1968). In 1973, as remounts of "Rainforest" invited other kindred creatives, the composer John Driscoll found mutual inspiration in its productions.

Driscoll donated his work, “Driscollage” (1973 [2020]) to Arter, for the express purpose of connecting the two shows, running parallel, between “For Eyes That Listen,” and “Rainforest V (variation 3).” In like manner as that of Paik’s spacey vinyl levitating upward in ascending order, decreasing in size, for “Random Access,” so the copper floats of “Driscollage” hang freely in a dedicated room. The novel designation of a “float object” is a cornerstone installation principle of both of these sound-based Arter exhibitions.

In contrast to the horizontal progression of line notation and its textual accompaniment in liner notes, Fluxus performers and avant-garde composers could be said to have foregrounded the verticality of musical composition, which as a physical expression might best be perceived in terms of suspension. That is the basis of “Rainforest V (variation 3),” and also, which can be seen throughout “For Eyes That Listen,” particularly in the “Untitled” installation by Annette Ruenzler, who exacted a scintillatingly beautiful evocation of lighting harmony.

A single note hangs in an empty space and falls. Sometimes, it crashes, like in the piece, “Destroyed Piano with Photograph” (2008), by Carles Santos, which by its title alone, is what it obviously is. Through the practices of conceptual art’s deconstructionism, the piano becomes a mere object, silently present, perfectly meaningless on its own, besides an oxygen tube, as in “Klavier Oxygen” (1985) by Joseph Beuys, or unplayable, as in “Play Cultural Situation” (2007) by Jülius Koller, of an upright cast in a net. Its art is captured, objectified, modern and unmusical.