To conceptualize in words: Deniz Gül at SALT Galata 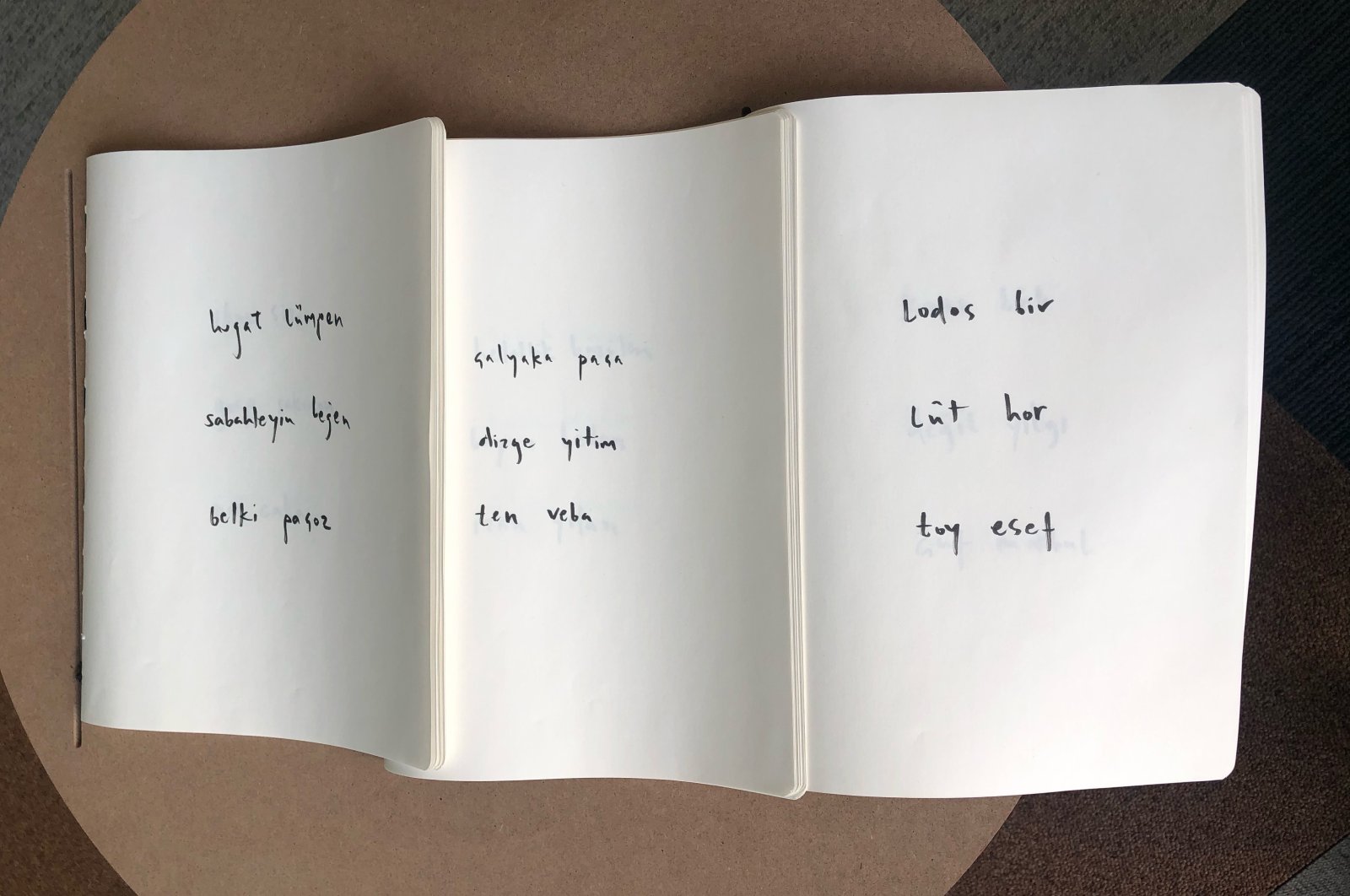 A large book with several words written on white pages is on display at SALT Galata's “Scratch and Surface” exhibition, Istanbul, Turkey. (Photo by Matt Hanson)
by Matt Hanson Jun 07, 2021 11:44 am

For her solo show at SALT Galata, “Scratch and Surface," the conceptual artist Deniz Gül produced a series of installations across the multi-floor arts research complex to investigate the inner worlds of verbalization

Turkish is a panoply of languages. Nowhere is this clearer than in its history of words. And although speech and writing are made up of more than the sum of their parts, thus exceptions to grammatical rule abound in all idioms, approaching language from the perspective of conceptualism in art history gleans a provident harvest of creative impetus, which, as artist Deniz Gül has shown, demands participatory engagement. Her installations are often generous public gestures, prompting those who might appreciate her works to think, write and listen, as she has done, to the constant surface-scratching that serves to uphold or remake civilization.

The idea that any human tongue might be circumscribed to the myth of a single folklore of exclusive ethnic entanglement is clearly and immediately disprovable by any studied glance over a piece of writing, or even a simple, educated overhearing of passing conversation. Turkish, in its current spoken and written forms, is the result of language reform and multicultural tensions. It is the living extension of its speakers as they continue to engage in uninterrupted, albeit artificially altered, discourse since time immemorial. Most importantly, it is as alive as its human community.

But unlike individuals whose lives are bound to the condition of sole embodiment, languages have an independent life of their own. They may die or become extinct while their people live, silent as the voices of their ancestors. A person, just like any one language, is a potent vessel of many overlapping tongues. As the history of national modernism has shown, death and extinction are inappropriate metaphors where Hebrew, for example, is the only language to have been resurrected from its dormant state as a dead, liturgical language. It is nowadays spoken afresh by young people who, with a basic education, read ancient texts like new.

In her piece, “Klavus" ("Plungr") (2016-2021), Gül culminated five years of research and writing in reference to the standard Turkish spelling guide that ostensibly educates as it mystifies children across schools in Turkey. In the well-stocked library at SALT Galata, furnished with a broad selection of critical periodicals and academic literature, “Scratch and Surface” fans out with a series of spotlit tables on which the pages of the spelling guide are open and presented as scrawled with the red marker of the artist as she mused on her subject. Mostly impromptu, her adaptations and interpretations reflect her conceptual poetics.

With the parallel of a photographic memory but for words – what might be termed a logographic memory – Gül, when asked, is able to recall every detail of each cryptic scratch that she impressed onto the surface of her copy of the dry reference book, which she practically water-logged with traces of personal invention. In brief, she retrained the usage of Turkish into a course of individual exploration, expressing her voice as an artist who sees language itself as fiction, going one step further than its demarcation as symbolic. In the process, she came across words that have been lost to popular knowledge, vestigial perhaps, but no less riveting.

For the word “tohum," which means “seed," she underlined and starred it, noting a variety of reflexive patterns, her own image-making of signs and effects that, without a thorough, immersive explanation, are as mysterious as the older, unused words in their midst. Beside “tohum” Gül wrote “evde," meaning “at home". The associations, free and interpretive, are aptly accompanied in the context of the show's many moving parts. “Klavus" is arguably best paired with “Çeviri" ("Translation") and the website artwork hashwords.net, comprised of a selection of words hyperlinked to their latest appearance on the Internet.

Consider that words are a kind of prehistoric, sonic evidence manifest as the foremost currency of human communication. In that context, following leads from their collective source in text to the mind of an artist invites ample comparability to the Internet’s algorithmic capacity to excavate the broader contexts of language in relation to the sociocultural moment and the technological channels through which linguistic forms are transferred. These themes are further explored in the lecture series that Gül produced as part of "Scratch and Surface” within the frame of “Çeviri” (accessible at ceviri.info).

At last a reply

Underground at SALT Galata, in proximity to the building's former Ottoman bank vaults, a construction worker is busy covering the floor of a vast, windowless basement room with puzzling trails of concrete blocks, purposefully removing and redirecting them according to an architectural map produced by the artist. The streaks of solidifying adhesion have a peculiarly editorial air, and the blueprint is an apt, visual parallel to "Klavus." As a metaphor for the writing process, Gül's installation “Daire Düz" ("Flat") (2021) is representative of the artist's signature logocentric sense of humor in which concepts reach life-size proportions.

In conversation, while she advised her solitary construction staff, apparently handpicked from a commercial construction site, Gül reminisced on her days visiting the United Arab Emirates (UAE) while participating in the Sharjah Biennial in 2017. It was in that rapidly developing city where she observed buildings under construction and, as a conceptual sculptor who writes as part of her artistic practice, saw the everyday activity from a creative standpoint. The inception of "Daire Düz” resulted from Gül’s constant fount of commingling inspirations that ensue like living language, transcending normative grammatical law to be understood.

To round out the installations of "Scratch and Surface," literary, archival, performative, interventionist and multimedia, there is a room up the elegant stairs from the entranceway foyer at SALT Galata in which Gül placed three books, with three words inked on each page beside an iPad open to a sample of voice recordings. The piece is “Tavlamalar" ("Temperings") (2021), and like "Klavus," or the hashwords.net site of “Çeviri,” encompasses a venture into the nature of language as connective tissue, which by its concatenations of sounds, meanings and letters always leads to more, even if there is no seemingly traceable logic by which to return or repeat said phenomena. Language, like art, is finally exposed as arbitrary as it is flexible – open-ended as the idea of the future.