To see through: The transparency of Karin Kneffel 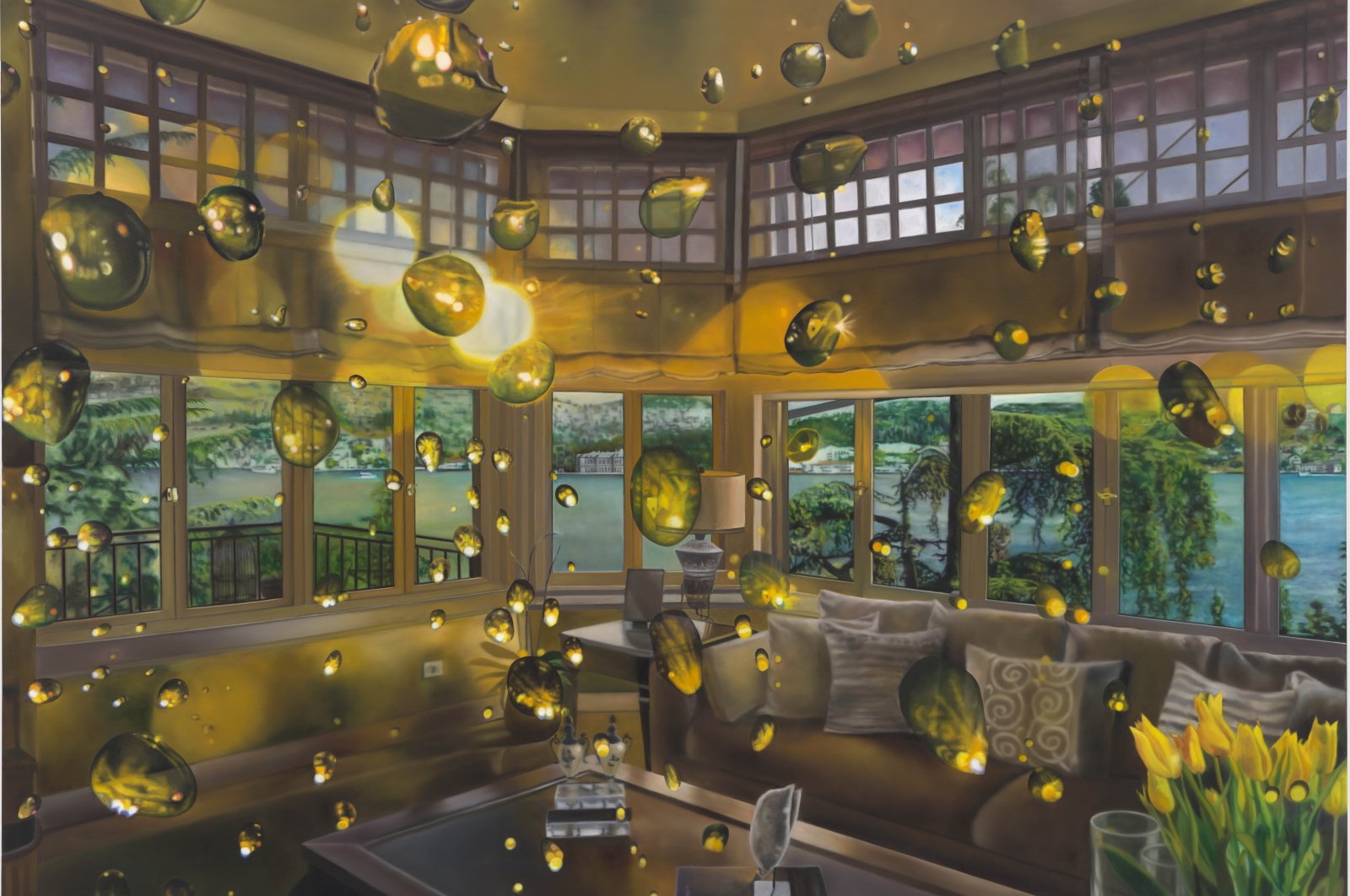 For her solo show at Dirimart, the German painter Karin Kneffel is exhibiting an impressive sweep of 19 paintings, curated meticulously, as visual meditations on the soft focus of photographic perception

The advancement of technology and its integration with the art world are a trending topic in 2020. Though, the linear progression of modern innovation, via the power of human sight and the instruments that magnify it with hyperreal precision, is still subject to questioning in both science and art. Whereas the intellectual theory of historical and evolutionary cyclicality holds sway with the approach of quantum dynamics in popular knowledge and cultural activity, its demonstration, by more traditional means, such as painting remains a rarefied endeavor.

As a seasoned painter whose prolific oeuvre of canvases appears to span lifetimes of honed and diversified practice, Karin Kneffel consummates bold experiments in the picturing of ideational beauty with singular finesse. Her latest series of untitled paintings, all produced entirely within the year, are titled with a conceptual bent, as "Haymatlos," a complex term that indicates statelessness, both metaphysically and by immediate experience. Kneffel conveys a psychological condition, peculiarly emotive, with nothing more than oil paint.

If photography is arguably considered to be a more accurate depiction of sensed reality and thereby is generally seen as a more advanced tool than the traditional mode of paint to generate representational images, Kneffel has painted a convincing rebuttal. Yet, her works explore further. They also demonstrate the unique capacity of creative painting (as her craft might be called, like "creative writing," in lieu of the overused "art" of painting), to penetrate into the essence of seeing.

Through aesthetically exquisite oils, "Haymatlos" intently contextualizes the all-absorbing faculty of vision as a subjective act more representative of the mind than of the normative objectification of the world. Kneffel points to abstract notions of truth by quite earthly means, parallel to her reimagined landscapes and still lives. At the same time that "Haymatlos" could be interpreted as a disembodied form of statelessness, she points to its relevance between the lands of Germany and Istanbul, with nods to leading modernist thinkers in Western history.

As curated, the expansive, lofty interior of Dirimart begins with a single painting suspended on a wall. Its placement demands full attention, blocking every view but for passages on either side. The tone of the exhibition is introduced by a single, prefatory work. The piece chosen to open the spatial reference of "Haymatlos" bears visual motifs that recur throughout the show, that of water bubbles floating, as in defiance of gravity, but more, like condensation on the surface of a window.

The idea of transparency enjoys curious, persistent fascination where art theory and contemporary philosophy intersect. The sense of clarity or lack thereof is a function and quality of seeing, not merely as an act, but as the result of its action. Kneffel's paintings explore these modes of inquiry with playful tact. Opposite the initially curated piece, through the contiguous halls that stretch toward the back of the Dolapdere warehouse space that is Dirimart, a canvas by Kneffel reads, "I am not a kitchen!".

The kitchen piece, as it might be referred to informally while remaining untitled, is an evocation of the Frankfurt Kitchen design of German emigre Margarete Schütte-Lihotzky. Kneffel uses the model, symbolic of "Haymatlos," to juxtaposes various, cognitively dissonant varieties of perspective. For one, the statement, lathered in vibrant cobalt blue paint, despite being text, leaps forward out of the unfocused image behind it, of a pale, unfocused figure sitting at a kitchen table. The gray scene lacks realness against the letters that cast shadows.

Dirimart has the sleek architectural approachability of a New York neighborhood gallery, yet with the spacious openness of a European museum floor, with its long, thin ceiling lights beaming down to illuminate such shows as the recent, fellow Düsseldorf artist Candida Höfer. In contrast to the glaring broad daylight and hospital lighting of a Höfer capture, Kneffel has mined the profound reach of the painting to touch on the intimacy of sight, where the sensing act itself subtly influences that which is seen.

In frame of perceptual alterity

The kitchen piece that concludes the spatial course of "Haymatlos" seems to be part of a diptych beside another work of a domestic scene, only overlain with the textural paint smear of a crimson red x. And hovering over its frame within a frame are webs of shade, perhaps reflected from the outdoors, or as they might have fallen within the artist's studio while painting. The smear reappears, like an unfinished work in the shape of a right angle, over her study of the sculptor Rudolf Belling's monumental sculpture of Ismet Inönü, Turkey's second president.

Kneffel has painted the sculpture looking up from below, gazing simultaneously at a dramatic, cloudy sky of deep azures tinged and burning with a greenish orange horizon. She also painted Belling himself in the middle of sculpting the piece, which he worked on after having fled Germany in 1937.

A year later, the first female Austrian architect Margarete Schütte-Lihotzky was also in Istanbul, reuniting with exiled German architect Bruno Taut. Together with Schütte-Lihotzky, Taut and Belling, "Haymatlos" pays a deserving homage to Erich Auerbach, who wrote his grand opus, "Mimesis" in Istanbul among fellow German exiles during World War II, establishing the academic discipline of comparative literature. Many of the paintings that Kneffel conceived for "Haymatlos" conjure Bosporus landscapes that these towering, yet displaced thinkers would have been seeing as they set into motion some of the most influential momentums of modern scholarship, design and art.

It is, in a certain way, full of contradictions, to realize that these sagacious exiles were simultaneously reconstructing the world that they had come from and were losing to barbarism and demagoguery. Despite forced emigration, the ingenuities they developed while in Istanbul remain canonical to the cultural legacy of the 20th century. Kneffel, through multilayered works painted with a scintillating grasp of light and angle, affirms the power of seeing from different places, or even placelessly, as a transformational act of self-awareness.