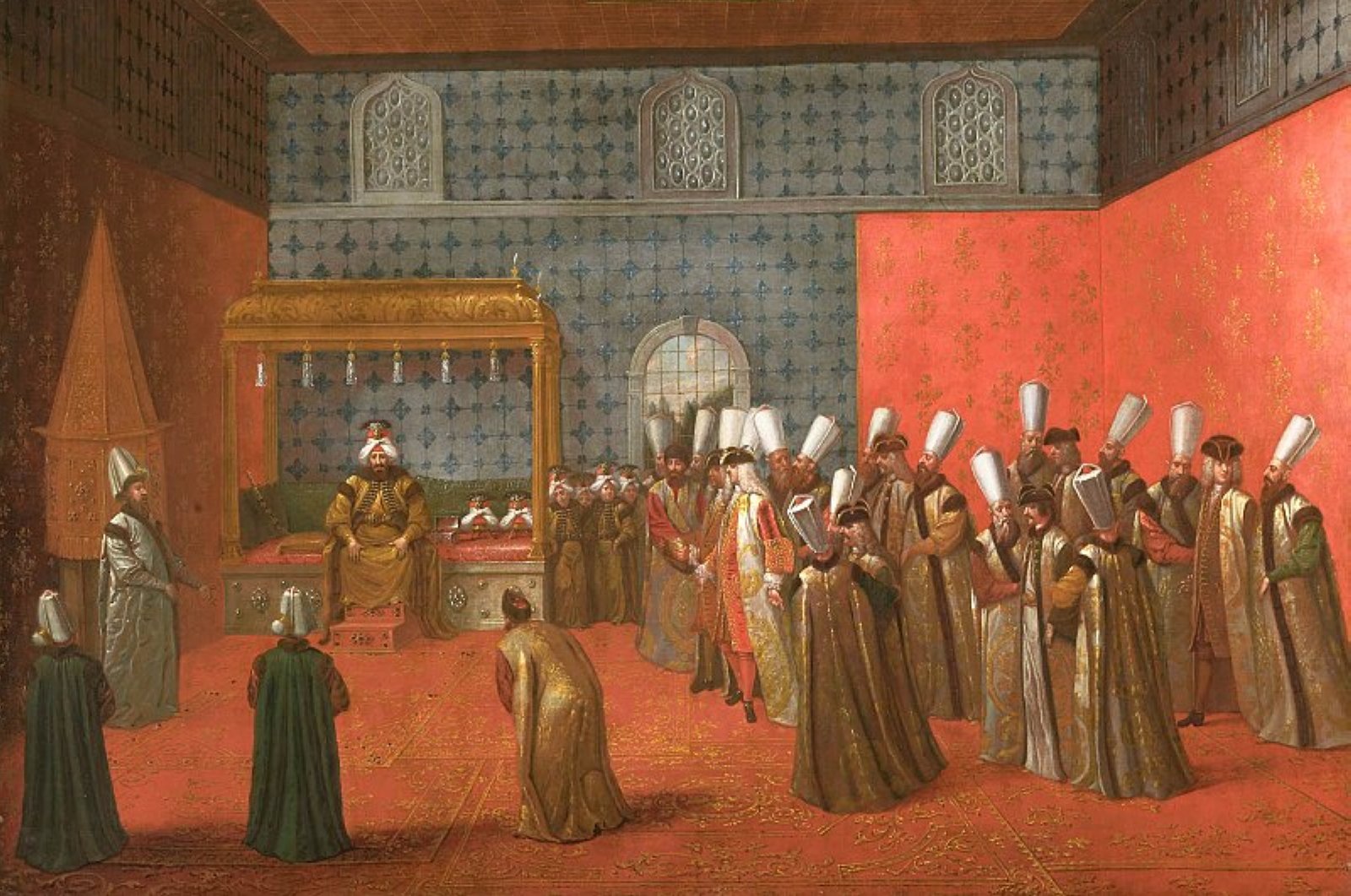 The rise of the Ottoman Empire brought about an increasing connection between the East and the West, causing Turkish fashion – or 'Turquerie' – to instill an influence on fine arts, architecture and music across Europe throughout the 18th century

Europe’s relations with what would emerge in the popular imagination as "the East" were sealed most unequivocally in the time of the Crusades. The focus of these military campaigns would begin to steer their focus toward the Turks from the 12th century onward. The Anatolian Turks, who had a short period of interregnum following the demise of the Seljuk Empire, gained momentum once again with the rise of the Ottomans. By the end of the 14th century, the House of Osman had all but subsumed the shrinking Byzantine Empire. Ottoman conquests, always turning west from the Balkans, soon became considered a serious threat to Europe.

The Ottomans, who launched the age of imperialism with the conquest of Istanbul, became a phenomenon not only in terms of political superiority but in the effect they instilled on various branches of culture and the arts. In the time of Sultan Suleiman I, known in Europe as Suleiman the Magnificent, both fear and admiration were felt against the Turks in Europe. The frightening splendor of the Ottoman power attracted a lot of attention, which would lead to curiosity and admiration over time and later give birth to the Turquerie movement that started in Paris in the 18th century.

The Ottomans gained commercial and political power by establishing good relations with France. These relations were not limited to these spheres alone, however. The image of Ottoman-Turks began to appear more frequently in French literature, with interest visibly increasing especially between 1551 and 1555, when the French began holding joint naval exercises with the Turks in the Mediterranean.

In this period, writers and poets began to pore over Turkish military and religious concepts. Surely, Turk was always synonymous with "Muslim" and "Ottoman." Many writers and poets, spearheaded by Pierre de Ronsard, Jean Antoine de Baif, Joachim du Bellay and Rémy Belleau, were charged with exalting the status of the king and his retinue in politics, philosophy, religion and literature, bringing French literature out of the Middle Ages, and modernized it through their works.

At first, the Ottomans were thrown up as a source of terror – the images writers used being, of course, shaped by the interests, religious attitudes and diplomatic relations of their heads of state. The Turks were also thus considered a warrior enemy for whom to be on the lookout. Authors wrote of the burden of having to deal with an extremely powerful Ottoman foe.

On the other hand, the dynamics of the Ottoman power, in terms of the elements of their state administration, the way of living and values, complicated these feelings and thoughts.

French poet Pierre de Ronsard, known as the "Prince of Poets," was among those who focused on this particular subject. In one of his poems, he portrays the legendary King Clovis as: "The conqueror of the Holy Land, still threatening the Turks with war." Meanwhile, in another work, he prophecizes the downfall of the Ottoman Empire would disappear, giving way to others – thus attempting to instill his reader with hope.

Ronsard was a utilitarian and pragmatist. In a poem dedicated to Queen Catherine de Medici, he praises the Turks' attention to religion, saying they should be taken as an example:

“Turks are careful, although their religion is bad. They choose the elegant people among themselves and raise those who know their religion most skillfully. Knowledge empowers them to become serious and deep soothsayers”

Again, in his opinion, the sultan is presented as an understanding, serious, influential and strong figure, who should not be underestimated. On the contrary, the sultan should be given as an example to the “other side" – i.e. the Christians.

When the Ottoman ambassadors visited the Chateau de Fontainebleau, located south of the center of Paris, in 1607, it aroused great curiosity and interest among the nobility. After these visits, musicians wearing Ottoman-style clothes would perform a French ballet show.

The retreat of the Ottoman armies from Central Europe following the Battle of Vienna in 1683 marked a turning point from which old fears could be replaced by curiosity. At the end of the 17th century, the curiosity the Turks inspired among the European aristocracy soared. Much artwork began to take shape in line with this trend. Images and concepts originally founded to instill fear gave way to fantasies that could cater to the curiosities of the nobility. Exaggerated, imaginative portrayals of Ottoman palace and state life were particularly popular. Painters such as Joseph Parrocel, Henri Fantin-Latour, Charles-Nicolas Cochin, Nicolas Lancret, and Charles-André van Loo produced many Orientalist works, despite never having set foot in Ottoman lands.

Along with the reduction of conflict and increase in visits by travelers and emissaries, the “Turquerie” trend soon started to be seen in all spheres of art and culture, from literature to painting.

The main cause behind the rise of Turquerie in Paris was the arrival of a certain Ambassador Mehmed Çelebi, known by the nickname "Yirmisekiz" (or "Twenty-Eight" in Turkish), who was sent to France in 1721. This period is what Ottoman historians refer to as the "Tulip Era" and marks the peak of culture and art in the Ottoman Empire. Even the beauty of the tulip flower, a symbol repeated much in Ottoman art, was a cause for admiration at this time. Mehmed Çelebi and his Turkish entourage reflected all the elements of this refined aesthetic period. With his visit, Turkish fashion made a splash in Paris.

Ambassador Mehmed Said Efendi, who visited Paris in 1741, was similarly admired. He appeared before the King of France Louis XV, known as Louis the Beloved, in Versailles. Charles-Nicolas Cochin, one of the aspiring painters of the palace at that time, was instructed to record this important welcoming ceremony. The clothes of European aristocrats and other visitors at the front of the ceremony were similar to those of traditional Ottoman costumes.

The Parisian newspapers made numerous visits to the two ambassadors and their eccentric circles, making headlines for days. After these visits, characters wearing traditional Eastern garb such as turban and shalwar began to enter literary works, paintings, ceramic figures and theatrical scenes. Special and glamorous “Turkish Rooms” were established, with “Turkish Gardens” becoming a favorite background art.

French playwright Moliere's five-act comedy-ballet, “The Bourgeois Gentleman,” saw actors wearing Turkish-style clothes take the stage. Those nobles who arrived at balls in Turkish clothing over this period were much favored. Noble ladies had their paintings drawn in Turkish-style clothes and displayed them in the most popular corners of their homes.

Turkish motifs such as crescents, palm trees and camels became the subject of wall panels, furniture, and snuff boxes – small ornamental boxes popular in the 1700s and 1800s. Both the spoils from war and the items brought from Ottoman lands drew great attention. The French diplomat Harbette said, "Paris has almost become like one of Istanbul's neighborhoods" when describing this period in France.

Europeans, who began to avidly study the Ottomans in all aspects of their lives, were also interested in the empire's music. The Ottoman military band that drew the most attention at first was the marching band, the “Mehters.” The glorious, hair-raising trumpeting of the Mehter band further nurtured the Turk's fearful image. The majestic and epic atmosphere their battle-cry once brought about, however began to be replaced by admiration.

The 18th century is an era when music changed much in Europe. As a result of Turquerie, Ottoman music came under serious study in this regard, paving the way for Prussia, Russia and Poland to create similar marching bands.

The effects of Turkish music emerged in the form of “Alla Turca” music. Turkish-inspired operas began to be written in great quantities. Wolfgang Amadeus Mozart himself titled his Piano Sonata No. 11, "Alla Turca," which imitates the sound of Turkish Janissary bands.

Meanwhile, Christoph Willibald Gluck’s one-act opera comique “Le Cadi dupe” ("The Duped Qadi" – qadi being an Islamic judge), Mozart's “Die Entführung aus dem Serail” (The Abduction from the Seraglio; also known as Il Seraglio) and Gioacchino Rossini's two-act opera in “Il Turco in Italia” ("The Turk in Italy") are cited as some of the most famous Turkish operas.

From imitation to reality

Aside from those artists imbued in imitation and fantasy, a number visited Ottoman lands and even created works while settled in Istanbul. These artists put their observations about Turkish culture and lifestyle into both literary and painting works – many taken by the travel notes of French novelist Gustave Flaubert and French poet Alphonse de Lamartine. However, they were still unable to witness regular Turkish family and palace life.

The wife of the British ambassador, Lady Mary W. Montagu (1689-1762), is among those who had the opportunity to see the lives of the Ottoman palace and the Istanbul elite. Featuring Montagu’s travels and observations about Ottoman life, “Letters from Turkey” is one of the first realistic works that give details about Turkish social life.

Turquerie fashion also influenced painters across France, England and Italy. However, those who created works in Turkey were the most famous names of Turquerie. Jean Baptiste Vanmour, a Flemish-French painter renowned for his detailed portrayal of life in the Ottoman Empire during the Tulip Era, comes to the fore among these painters. All the works of this artist, who lived in Istanbul for many years, fall in line with the Turquerie theme.

The Turkish influence on European society thus first emerged with fear before evolving into curiosity and imitation, ultimately giving birth to the Orientalism of the 19th century. Turkish fashion, which started to lose its influence with the French Revolution, had completely disappeared by the time of the fall of the Ottoman Empire.

However, Turquerie, which had been considered to be outdated for a long time, would come to life again after 1970. Artworks and various items started to attract the attention of collectors and critics once museums and galleries began opening exhibitions centered on various locations. Since this revival of Turquerie fashion, orientalist works in Turkey and Europe have become indispensable for auctions titled “Turkish Sale” and “Ottomans & Orientalist."