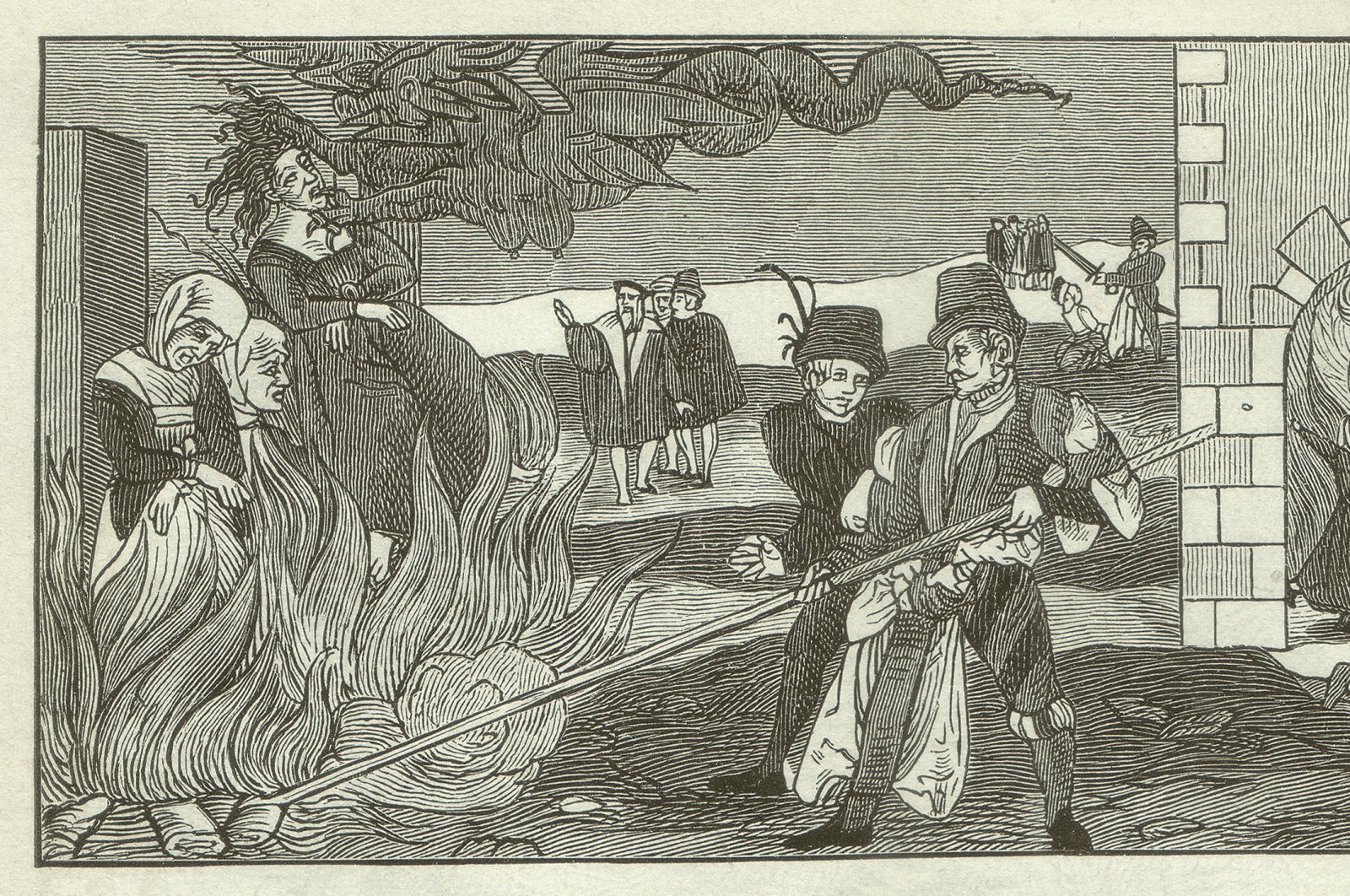 A woodcut engraving shows a witch-burning scene in the County of Regenstein of the Holy Roman Empire in 1555. (iStock Photo)
by ALİ TÜFEKÇİ Sep 29, 2020 1:39 pm

Mysterious events are sometimes passed down to posterity in writing. Here are myths of witches, zombies and vampires from renowned Ottoman traveler Evliya Çelebi's book

The 17th century was the most magnificent time of the Ottoman Empire. At the beginning of this century, the famous Ottoman traveler Evliya Çelebi was born. He learned Arabic, Persian, Greek and Latin, memorized the Quran and continued his education in Istanbul until the age of 25.

Çelebi was a very eccentric person who could not restrain his passion for traveling. So, he began his journey covering 257 cities, going from one land to another, and spending 51 years of his 71-year lifetime on the road. He immortalized the events he saw, heard and experienced in his native language and revealed his interesting style in his work called “Seyahatname” (“Book of Travels”). The 4,000-page book in 10 volumes is one of the most unique sources in world history.

All historians agree that Çelebi's book, which has been the subject of multiple research studies, needs to be read carefully. Fifty percent must be filtered as Çelebi recorded everything in his book, without looking at what was true or what was false. The freezing of a cat jumping from one roof to another and a virgin girl giving birth to an elephant are examples of this.

Çelebi had a story to tell about everything, including those about “sorcery,” “magic” and “witches.” He also described the talisman, witches, magic and sorcerers he encountered during his journey, and the metaphysical beings he witnessed.

He interpreted these events he experienced in reference to previous talismans and legends. There are even references to him narrating one of the earliest known “vampire” stories, which was said to serve as the basis for the classic “Dracula” stories. When talking about performances of magic and juggling, which he watched in squares, pashas' mansions, banquets and festivals, he emphasized the “show” aspect of them. However, some cases of witches, spells and vampires that he told were based on his personal experience. He blended them with truth and revealed them in the presence of witnesses with a specific date.

The first incident occurred on the night of April 26, 1666, in the Pedsi village of the Caucasus, consisting of 300 houses. In this village, Çelebi witnessed the war of witches in the sky. On a pitch-black night, lightning struck suddenly. It was even bright enough for Circassian women to do embroidery.

Feeling a kind of strangeness, Çelebi asked the Circassians around him, and they said, "Once a year, there is a night of karakoncolos – Circassian witches and Abkhaz witches fly to the sky and fight in a great war." Karakoncolos means an imaginary creature, witch and demon in folk language. It is said that one can go out and watch this war without fear.

Çelebi came out with some 70-80 people with their weapons and was astonished to see that the witches on large trees, cubes, boats, carriage wheels and many other similar objects were fighting witches on horses, cattle, carrion and dead camels, with snakes, horses and camel heads in their hands.

A loud noise was heard in this fight, which lasted exactly six hours. Parts of things such as felt, poles, cubes, doors and carriage wheels, and parts of humans and animals such as horses rained down from the sky. When seven Abkhazian witches and seven Circassian witches fell to the ground, the Circassian witches immediately killed Abkhazian witches by sucking their blood and threw their bodies into the fire. The war ended with the crowing of roosters and the witches were gone.

Çelebi stated that he did not believe in such stories at all, but that he was astonished to see them personally. The residents of the village said that such a violent “night of karakoncolos” had not been seen for 40-50 years.

Çelebi talked about the zombies we watch in series like “The Walking Dead” today. According to the public, witches drinking human blood also appeared on karakoncolos nights in the Caucasian land. On some nights, witches drank the blood of the person they haunted, making them sick. If someone whose blood was drunk was an outcast, he got sick and died.

If the patient was not a lonely person, his relatives went to cemeteries with a “witch hunter” to search for places where the earth was dug up, where the zombie witch came out. When they dug up the grave, they saw that the eyes of the witch were bloodshot because it had drunk blood. Thus, the zombie witch was detected and immediately taken out of the grave. A long stake of blackberries was nailed to her "belly." Also, her body was burned in the fire so that the soul of another witch in life did not fall into this body. In this way, the witch's magic was broken, and the person whose blood was sucked recovered from the disease over time.

Again, according to what Çelebi heard and conveyed, some witches living in these lands wandered among the people unnoticed. But when it was the time of frenzy, they held someone and sucked blood from behind his ear. The person gradually fell sick within days.

Immediately, the relatives of that person found a "witch master" and traveled through villages, towns and cities looking for this witch, whose eyes seemed bloodshot due to drinking blood. They would catch her and put her in chains. Chained for three days and three nights, when the witch confessed her witchcraft, she was immediately laid down and a blackberry stake was nailed to her belly. The blood that came out of her body was put on the face and eyes of the man whose blood had been sucked. Thus, the patient immediately recovered from the disease. The witch's carcass was thrown into the fire and burned.

Some researchers have looked for traces of exoticism in these stories of Çelebi about the Caucasus. According to some, the short-term domination of the Ottomans in the Caucasus gave this place an exotic reputation. That is why Çelebi included supernatural myths and legends about this geography.

Other researchers say that it would not be right to ascribe "geography-specific exoticism" to places. This is because the second case of witchcraft thata Çelebi said he witnessed took place in Bulgaria, in a place that was not considered very exotic by the Ottomans.

Çelebi was resting in a non-Muslim house in the Çalıkkavak village of Bulgaria. An old miserable woman with messy hair and an ugly face and seven children came in. At midnight, the woman turned herself and children into chickens by practicing magic with the ashes of the fire. Çelebi's men, who screamed and had nosebleeds out of fear, tracked the chickens.

Telling about what happened later on, one of Çelebi's men said: “The next thing we knew, a heathen was peeing on chickens. At that moment, they all turned into human beings. Some other people grabbed the woman and the children by the arms and beat them. We went and saw that the church was where they arrived later. They handed the woman over to the priest, and the priest excommunicated her.”

Çelebi continued: “My men swore an oath after this incident. They all saw this incident and witnessed that the chickens turned into humans. That night, my nosebleed did not stop out of fear. The bleeding stopped in the morning.” In the morning, his men brought Bulgarian peasant witnesses as well.

In his book, Çelebi mentions other sorcerer incidents he saw in various lands. The book first enjoyed a broader reputation after German Ottoman historian Joseph von Hammer-Purgstall read it. It was translated into several European languages. Similar horror stories told in “Seyahatname” were reflected in both Turkish and Western literary works in later periods.