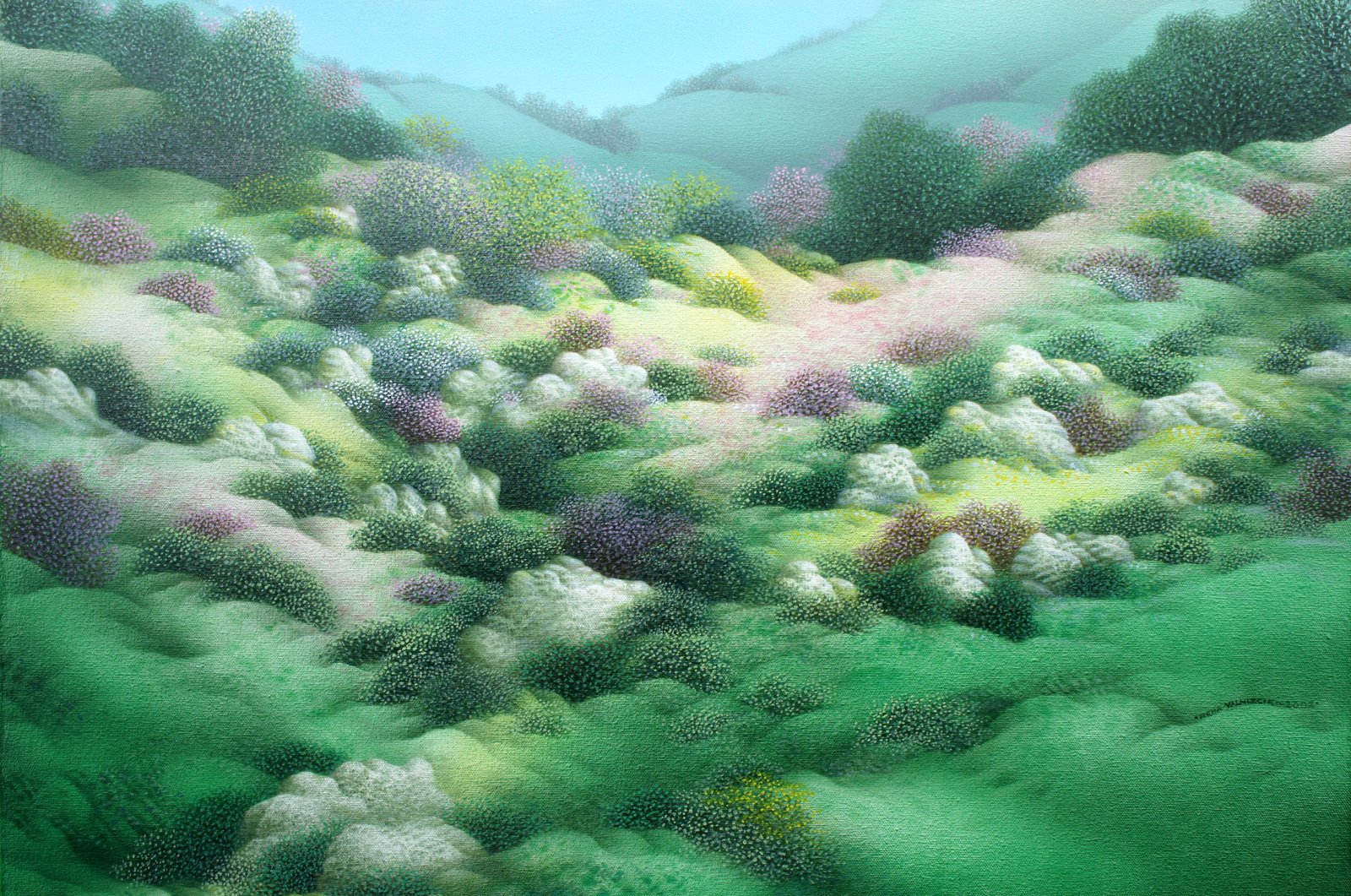 Although landscapes the “Postcards” series basically resemble each other, they differ in terms of colors. (Courtesy of Gallery Diani)
by İREM YAŞAR Mar 10, 2020 3:15 pm

Artists with authentic styles are ones who have found their own voice in their respective fields. They open up the doors to new worlds for viewers with their originality. These people, with indelible wisdom, leave a distinct mark at the very first glance of their canvas. For instance, tracking the renowned painter Gustav Klimt’s stylistic elements in each of his works is a great pleasure. His lyrical lines, extensive ornaments especially consisting of repeated shapes like circles and rectangles along with flowers, kaleidoscopic colors and figures referring to mythology and obscenity are recognizable in his oeuvre.

I met one such artist who managed to stand out in the field of art despite her young age nearly a year ago. Perincan Yalnızcık presented a special selection of works at Doku Art Gallery with her show titled “Yüzleşme” (Confrontation) in April 2019. She revealed her unique style which included colorful bases, architectural structures combined with mathematical computing at the exhibition. When I saw her works, bringing the artist’s personal confrontations to light, in the impressive ambiance of the gallery, I felt dizzy with pleasure. While interviewing this enthusiastic lady, I met her father, Reha Yalnızcık, who is also an artist. I wanted to find out more about Yalnızcık’s work since I was curious about the similarity in their styles. When I ran an internet search for her father’s artworks, I encountered pieces that were very different from his daughter's style. Finally, Yalnızcık, who brings a fresh take to the world of art with his original technique, also held an exhibition at Istanbul’s Gallery Diani.

The painter Yalnızcık graduated from the Department of Graphic Arts, College of Applied Fine Arts. His greatest desire was to paint all his life. Noting that he was lucky to have great art teachers like professor Mümtaz Işıngör and professor İlhami Turan, Yalnızcık said he made a living out of his hobby and devoted his life to the art of painting. The artist, who has never regretted this decision, said: “It is such a great pleasure to pursue your hobby as your job.”

For him, art is the best way to communicate and share. Keeping this in mind, he was mostly inspired by nature and transferred his reflections on canvas with the “Reha Yalnızcık technique” for 40 years. In his technique – which is highly inspired by his training in graphic design – Yalnızcık uses intense brush strokes and applies some techniques on patterns. Being a perfectionist, he pays attention to all fine details. When you step away and examine a piece by the artist from a certain distance, you feel like it is a picture or a print. Due to his perfectionism, his paintings never seem complete to him.

Yalnızcık's artistic style also has evolved over time. He has worked on various projects and opened more than 80 solo exhibitions since his school days. He attended 150 group shows, as well. Speaking of his projects, Yalnızcık mentioned that he would like to work on exhibitions with children. Before having a child, Yalnızcık worked with little children and held an exhibition with them in 1985. When his daughter Perincan chose to be an artist, the father and daughter started to produce joint artworks. They have showcased their separate productions in 14 exhibitions to date.

Yalnızcık had been thinking about collecting some of his works for a long time. On celebrating his 40th year in art, he finally decided to realize this project. When Gallery Diani’s owner Telga Südor Mendi offered to collaborate with him for an exhibition, Yalnızcık chose some of the paintings he had been saving. In the “40th Anniversary Solo Exhibition: From Travel Book, Various Tastes, Stamps and Postcards,” he offers three different series. The “Stamps” series was produced by the artist years ago to address environmental problems with small-scale works. The “Postcards” series which features landscapes, presents relatively larger works produced with particular brush techniques. These paintings may appear similar but are unique in terms of the colors used. In the last “Various Tastes” series, Yalnızcık reveals some examples from his previous show “Menu to Souls.” Dealing with foods and plates, he emphasizes the need for satisfaction both materially and spiritually.

Along with being a mini-retrospective, the exhibition reflects the artist's dreams and thoughts. He creates everything through his own imagination, the artist said: “The only time that I painted by observing my surroundings was ‘My Istanbul’ exhibit. In this show, I painted views of Istanbul by observing the city. However, all the rest depends on my creativity and imaginative power.”

Reha Yalnızcık’s “40th Anniversary Solo Exhibition: From Travel Book, Various Tastes, Stamps and Postcards” awaits art enthusiasts at Gallery Diani until March 24. You can pay a visit to the mind of this creative genius with this mini-retrospective.