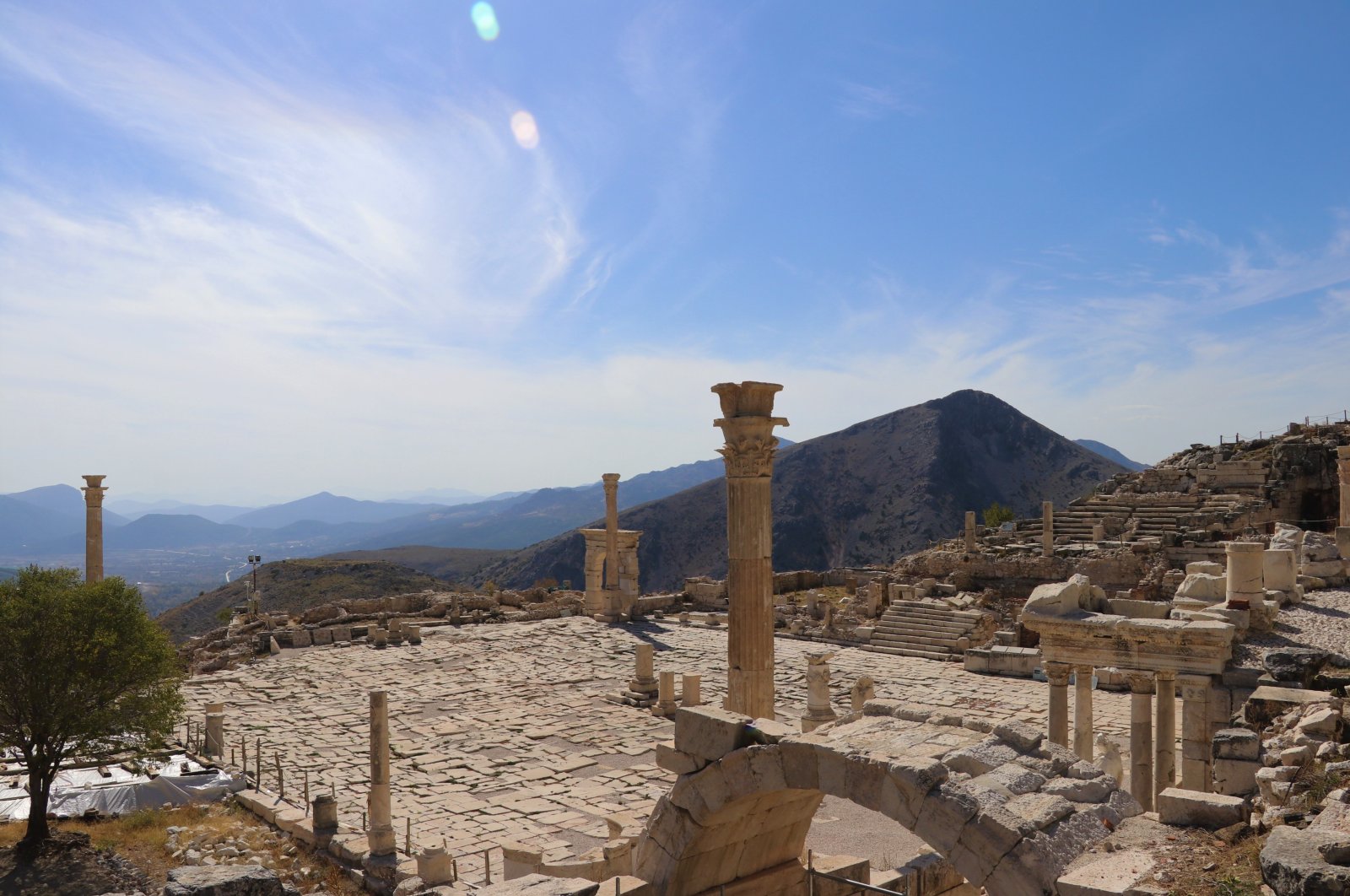 The ancient city of Sagalassos, a site on the UNESCO World Heritage Tentative List, takes visitors on a historical journey through its 5,000-year-old streets

Sagalassos, located in the Ağlasun district of southwestern Burdur province, is one of the best-preserved ancient cities in Turkey. Welcoming thousands of local and foreign tourists every year, the city takes its visitors through the dusty pages of history.

Known as the "city of love and emperors," the ancient city is situated at an altitude of 1,700 meters (5,577 feet) on the foothills of the Taurus mountain range. It attracts guests with its outstanding structures from the Roman period. Known as one of the most important cities that Alexander the Great struggled to conquer, Sagalassos reflects the best examples of Roman architecture. It was also one of the five leading ceramic production centers at the time.

Excavations in the ancient city began in 1989 under the direction of Belgian professor Marc Waelkens of Katholieke Universiteit Leuven (KU Leuven). After Waelkens' retirement, professor Jeroen Poblome of KU Leuven took over the excavation work.

The ancient city was added to the UNESCO World Heritage Tentative List in 2009.

According to Waelkens’ studies, the history of the ancient city of Sagalassos dates back to 3000 B.C. During this period, it was home to the Luwians, one of the native peoples in Anatolia. The mountain site of Salawassa, which was possibly the ancient city of Sagalassos back then, was mentioned in Hittite documents. However, this area of the Luwians was called Pisidia in the later period.

The Pisidia region gradually developed into an urban center up until the time when the Persians took over these lands. The reign of the Persians ended with the conquest of Alexander the Great, one of the world's greatest military commanders. Although significant progress was seen in the ancient city during the Hellenistic period, the city reached full splendor in the Roman era. Connected to the Roman Empire in 25 B.C., Sagalassos developed rapidly, and its largest monuments were built during the reign of Emperor Hadrian. The city started to shrink in population following earthquakes and epidemics in the later period.

Sagalassos resembles an eagle’s nest overlooking deep valleys. Its stunning structures include the Antonin Fountain, where water has flowed for thousands of years, agoras, Roman baths, a macellum (an ancient Roman indoor market building), a heroon (a shrine dedicated to an ancient Greek or Roman hero) decorated with dancing girls, a library and a theater for about 9,000 people.

The ancient city reopened its doors to visitors in June, implementing measures to protect against COVID-19. It was visited by 30,000 people by the end of October. Speaking to Anadolu Agency (AA), Burdur Culture and Tourism Director Abdullah Kılıç said that Sagalassos stands out among more than 25 ancient cities in Burdur.

Referring to excavations in the ancient city, Kılıç said statues of the emperors Hadrian and Marcus about 5.5 meters tall were unearthed in Sagalassos during excavations in 2007 and 2008. These sculptures are on display at the Burdur Archaeological Museum.

According to Kılıç, the ancient city was visited by 51,000 people in 2018, 80,472 in 2019 and 30,000 since June this year, and this figure is likely to rise to 60,000 by the end of the year. "A lot of visitors and tour buses come here, especially on weekends. People find it safer here because it is an outdoor area. The view here is also very beautiful, overlooking verdant nature. After visiting the historical streets of the ancient city, visitors enjoy the beauties of the Ağlasun district, which is located on the plain below, famous for its trout, walnuts and cherries," he said.